comments Share
You are reading
Flame Over – PS Vita Review

I’ve played a lot of hard games. Now while a game like Dark Souls is considered “Hard”, in a lot of ways it is still borderline fluffy when compared to gruelingly difficult classic games like the NES Battletoads. I’ve also played a lot of roguelikes such as the Mystery Dungeons series (Shiren), Rogue Legacy, and Chocobo Dungeon 2 (still a favorite). Flame Over made me rethink how good I really was at this genre, because I have never felt so under-skilled as I did while playing this absolutely intense twin-stick shooter. 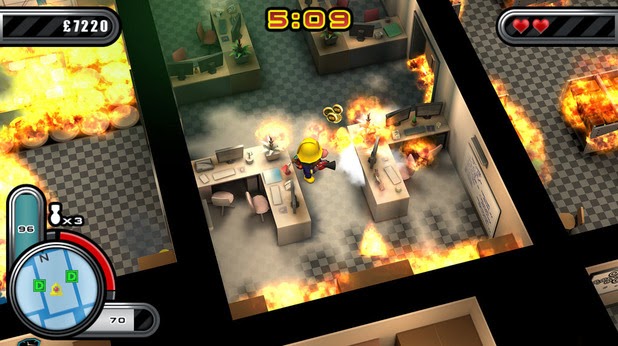 Flame Over finds players in the shoes of a firefighter as they delve into various locations to put out fires. Armed with a water hose, an extinguisher, and extinguisher grenades, you run towards the fire, hose blazing.

Now, if the idea of surviving while everything is on fire was not enough, players have to go through each stage with a cumulative timer that constantly reminds them how much time they have left. What happens when the timer goes off? Death himself comes after you. Better hurry and put out those fires!

Now while there is a timer not all hope rests on putting out all of the fires before it reaches zero. Travelling through multi-partitioned levels, players will find other people and cats that need to be escorted to the exit before the smoke or fire does them in. Rescuing both will allow our firefighter to survive that much longer against the raging flames that would incinerate him in as for every human rescued an extra minute is added to the clock. Rescuing cats will add an extra heart to your lifebar. 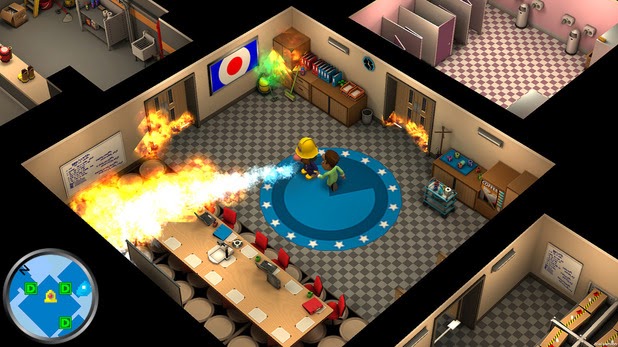 Starting off with three hearts, players will want to be careful as it is very easy to lose them. The sheer heat that you must stand in quickly eats away at you and once the heat gauge is maxed, one heart is lost. Not paying attention will result in the Reaper not even needing to wait for the timer to run out as you essentially deliver yourself straight to him like Chinese take out.

Once a player falls to the flames or the Reaper himself, that’s it. The game over screen gives players the result of their fiery delve before going back to the main menu. Now, I did say that this was a Roguelike. For all the fire that players put out they obtain currency that can be used on upgrades. Unfortunately, like everything else in Flame Over it’s not as easy as it sounds. Before being able to spend the obtained currency, players will need to have completed specific objectives for a particular person in order to get tokens to unlock the possible upgrades. She doesn’t make it easy as she will not follow you out of harms way until you fulfill what she asks of you even if it means falling to the flames preventing you from accomplishing the task thereafter. Getting better is a necessity otherwise these life saving upgrades will remain locked beyond your reach. 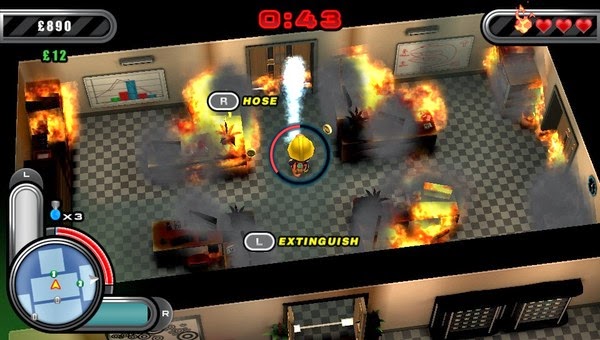 So far this has all sounded rather easy right? Here’s hoping because here comes the hard part. Flame Over is random. No two levels will ever be the same and in some cases the fire itself has a will of its own. Not only can the fire spread quickly depending on what it lights up but until the electricity is shut down, if something electrical catches fire then it’ll be actually spew fire until you can take it out with an extinguisher, water will not do the trick. The best part? Your extinguisher and water hose are limited resources before they need to be refilled either by heading back to the entrance for a quick full charge of each, or by finding a water fountain if your hose is all that is empty.

Between the limited resources, the random environments, the Reaper breathing down your neck, the raging flames and worrying about the people inside, Flame Over is one of the best damned Roguelikes that I have played in a long time. It’s brutal, punishing, and completely unforgiving of mistakes. With its high difficulty curve it challenges players to do better and master the seemingly simple controls to take out the raging flames.