comments Share
You are reading
Game of Thrones: Episode Three – The Sword in the Darkness – Xbox 360 Review

Choice.  Or at least the illusion of choice.  That’s the core gameplay element of the episodic adventure games by Telltale Games.  Great storytelling and strong characters make up the rest of the experience.  Both seasons of their Walking Dead series featured dozens of great characters and tons of choices along the way.  The story pretty much got to the same point by the end, but what was really interesting were those “important” moments, the ones that you worried about making the wrong decision.  One of the coolest features of the series is the recap at the end of the episode that showed what you chose for a handful of key decisions and compared it to others who also played the episode. 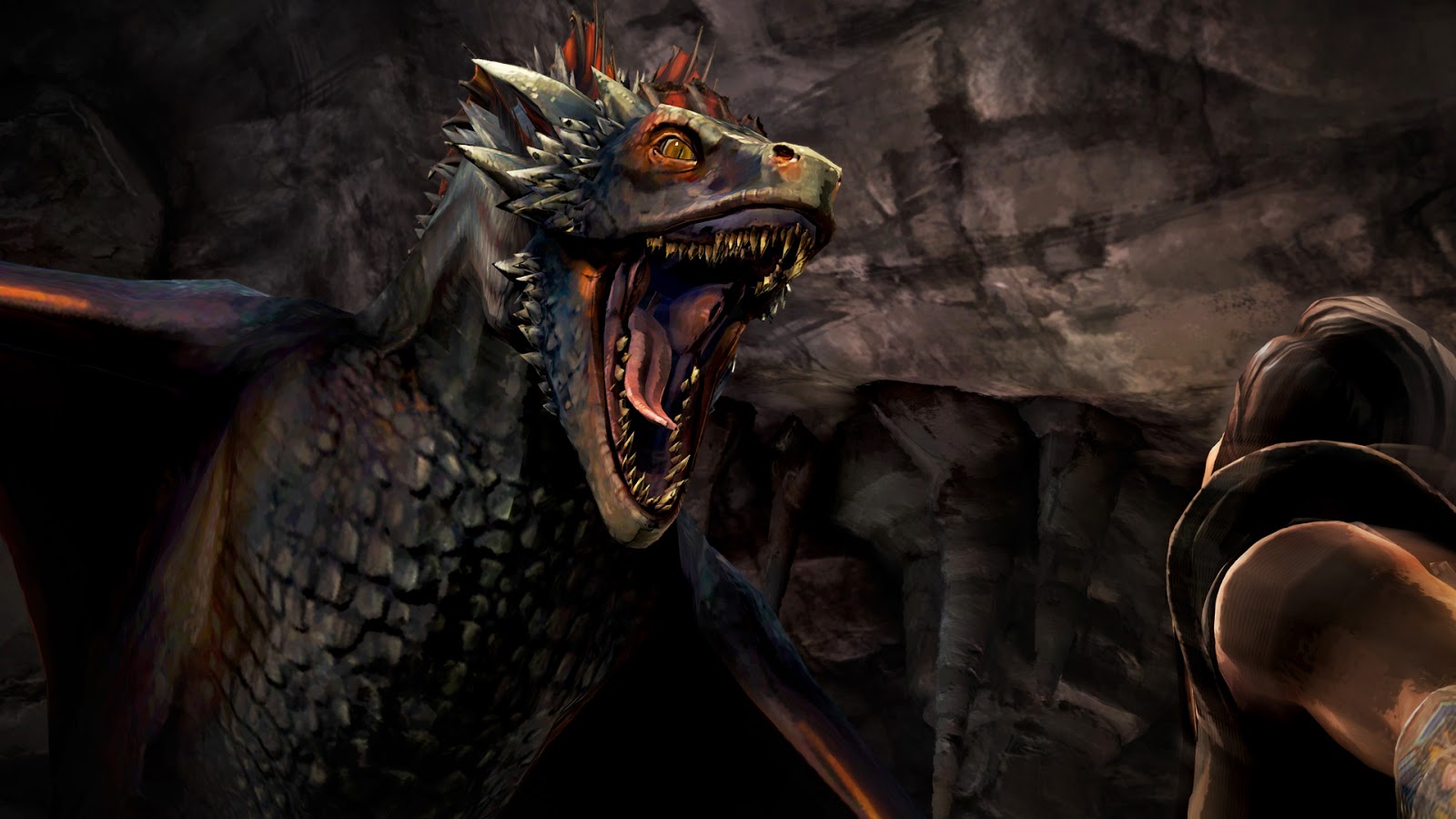 Game of Thrones has the same setup and I bring it up because I forgot to mention it in my review of Episode 2.  When the end-of-episode recap came up at the end of Episode 2, I saw something I’d never seen before.   Two of the decisions I’d made were the same ones that over 90% of gamers made.  90%!  Usually, it is relatively balanced with 40-60% of the people choosing one thing and the rest choosing the other.  Sometimes, you’ll see something where there is a clear majority (70% or so), but I’d never seen it that high.

So why did gamers playing Episode 2 tend to make the same decisions?  If “choice” is the half of the reason these games are interesting, then was Episode 2 a failure?  And if not, why not?  I think the answer is the other half of that coin, the storytelling and characterization.  George R.R. Martin’s world is full of good characters that do bad things and vice versa.  And occasionally, there are bad characters that just do bad things and are straight up villains.  The Mountain.  The Boltons.  The Freys.  Joffrey.

The game is much the same.  Good characters are forced to make hard decisions that put them in a negative light. Some characters that seem bad may have redeeming qualities.  But just like the rest of the world that the game sprang from, there are some straight up douchebags.  And sometimes, they are written well enough that you just hate them.  And so does everyone else.  So when the game asks you to make a decision about them, it isn’t really a surprise that so many people reacted the way we all did.

If the next four episodes end up having decisions that are that universal, then it feels like the story is going to lose some of the magic.  Sure, the story is top-notch, but if everyone plays it the exact same way, it becomes less of an interactive experience and more of an animated graphic novel.  And it isn’t as exciting to talk about with the guys over the watercooler.  When we make different choices, it gives us something to talk about.  “Hey did you finish Episode X yet?  Sweet, did you save that character?  No?  I did…what happens if you don’t?”  If we all play it the same, the conversation isn’t as deep.  “Did you save that character?  Yeah, me too. I mean, really, why wouldn’t you?” 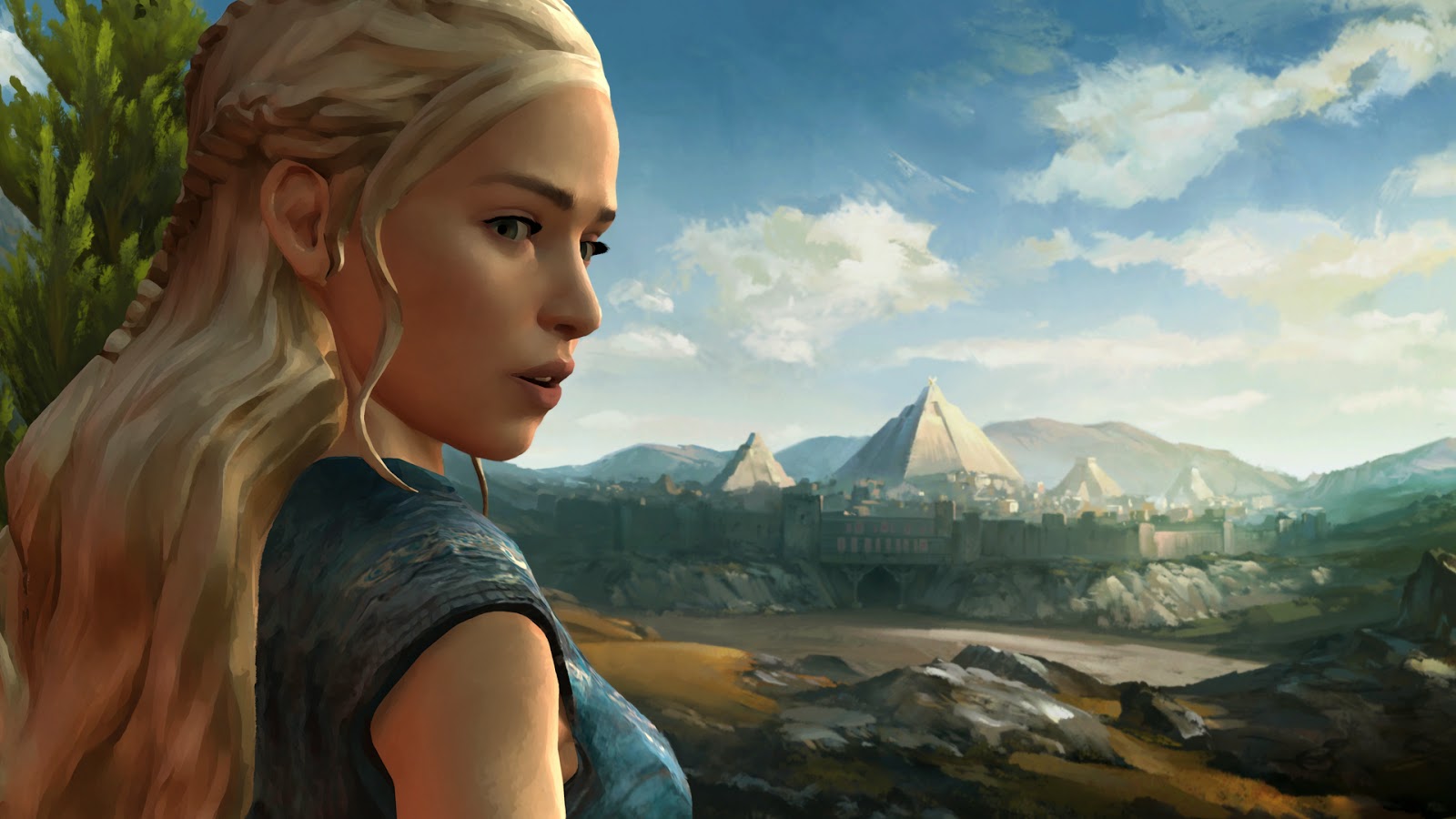 So what about Episode 3 then?  (After all, this is a review of Episode 3, not Episode 2.)  Does it get us back on track?  Or does it keep us all marching in the same direction yet again?

The good news is that my end-of-episode recap showed that we’ve swung back towards the middle.  There weren’t any choices that were skewed all the way to one end, at least no more than other episodes of this game or TWD.  Hopefully that means that Episode 2 was just an anomaly and things are back to normal.

Storywise, this episode didn’t seem as strong to me, most likely because we are getting into the middle stretch of a six-episode series.  Just as with the books and the TV show, I find myself far less interested in the scenes across the Narrow Sea.  I like Asher and I think his character has a lot of potential.  But just like with Daenerys Targaryen, I find myself saying “come on, let’s pick up the pace and get over to Westeros already!”  I’m also not as interested in his supporting cast (again, just like Dany).

I’m also starting to get a little foreboding sense that we’re going to be treading into the ASOIAF version of Forrest Gump.  Episode 1 kicked off right in the middle of one of the most pivotal scenes in the whole franchise.  Episode 3 sends us right into the one of the other “main” scenes from the books and movies.  While it is interesting to see some of these events from the perspective of an outsider or from “the little people”, it can be a slippery slope.  If it starts to feel too much like there is some checklist of events that they are using to guide where they send the characters, that will feel a lot cheaper to me than letting the characters grow naturally. 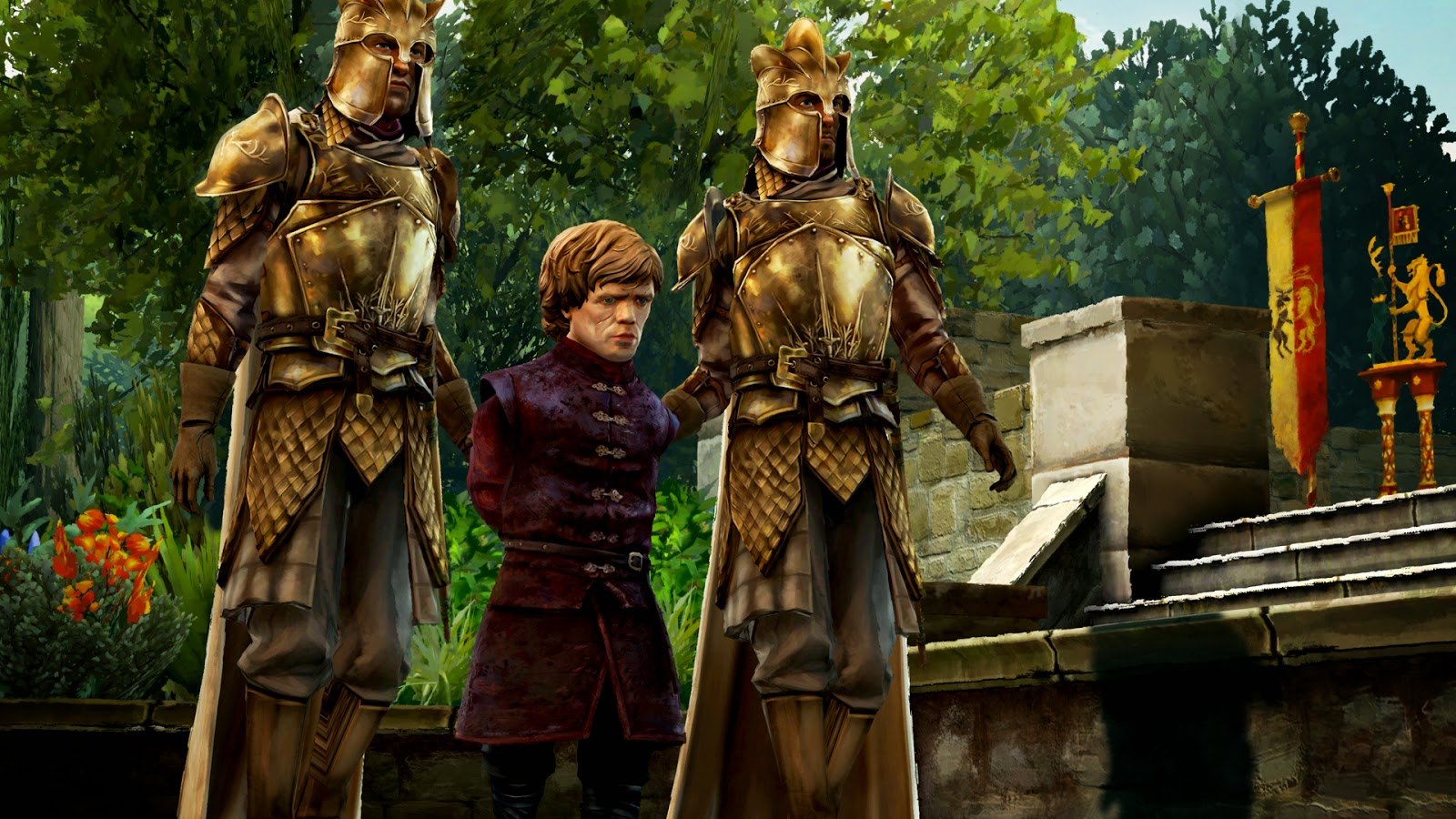 I’ll give them the benefit of the doubt for now, because at least there are legitimate reasons for the characters to at some of these events.  Handmaidens will end up going where the queen-to-be goes after all.

The sense of timing seems a bit rushed in some cases as well, particularly with the training of the Night’s Watch.  It feels like the episodes are pretty tightly connected without a lot of downtime between them, which gives you the impression that training to be a brother of the Night’s Watch involves showing up, swinging a sword, moving a barrel or two, and saying the oath.  Nothing that can’t be handled in an afternoon.  Because of that, it is a little harder to believe that these guys are truly like brothers now.

All that is nitpicking, though.  The story is still good.  There are some interesting revelations about one side character in particular that will definitely help drive the story for the second half of the season.

If the story is still up to Telltale Games’s standard, then unfortunately, so is the tech.  The game still stutters pretty badly during some scenes, and the weird shifting art styles don’t seem to make sense.  I still think that the changing cell-shaded border around characters is a glitch and not intentional; otherwise it is a very weird design choice. 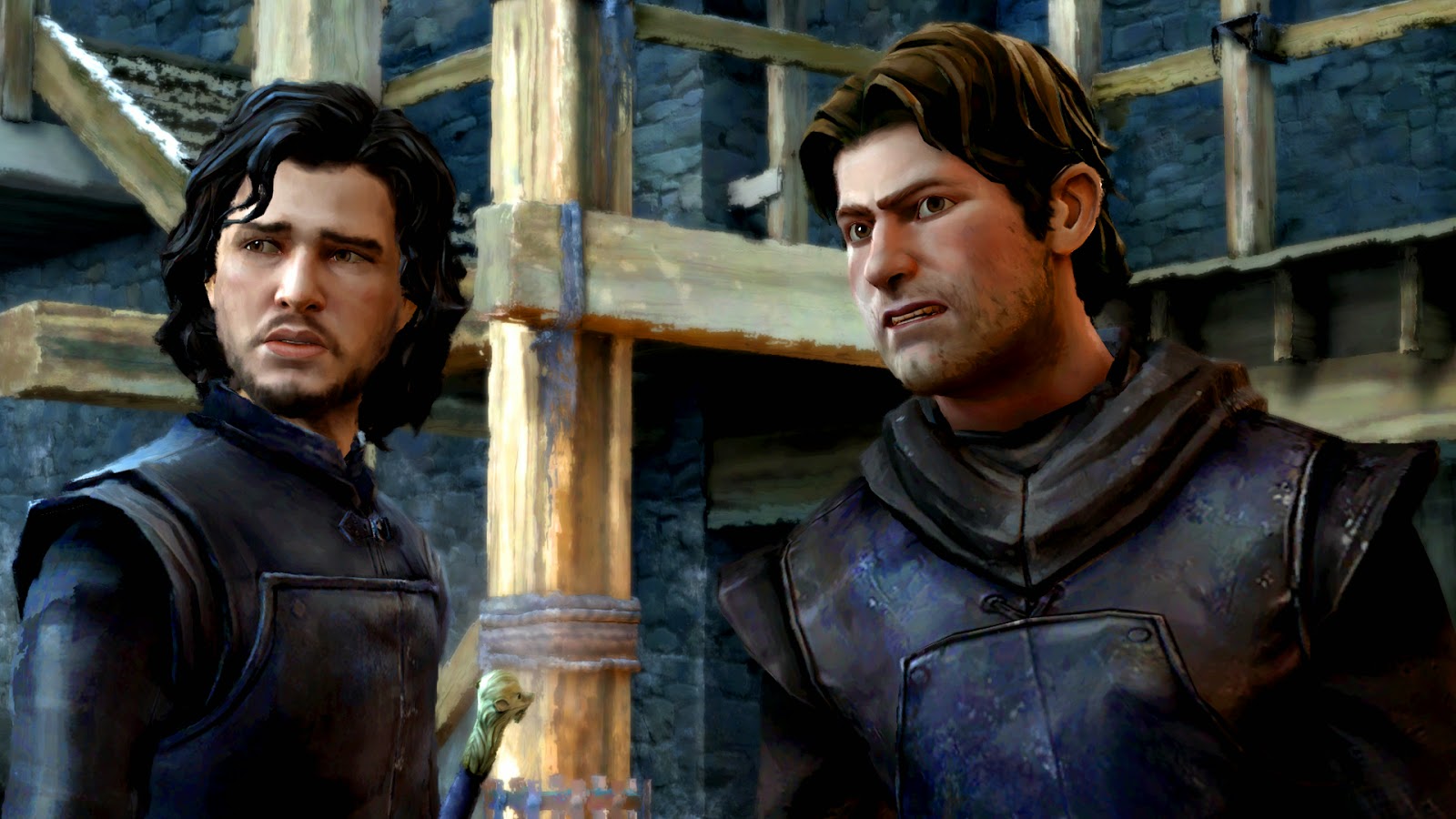 The worst part, though, is the audio, which also glitched out a few times.  I don’t know what they paid some of the TV series actors for voice-over work, but they were probably expecting to get more bang for the buck.  One prominent character started talking and the audio glitched out completely.  I think I actually only heard half of the characters lines.  They were well-done when I could hear them.  But when you only have a character speak two sentences in the entire episode, it is disappointing to only actually hear one of them.

Luckily, I always play with subtitles on (having four sons running around the house teaches one not to rely on hearing what people are saying), so I didn’t miss anything.  If you are the type that likes to play without subtitles, I’d try to get over that with this game.  Generally speaking, the writing is good; it would be a shame to miss something because of the technical issues.

In the end, Episode 3 played out very much as I expected.  As one of the middle chapters in the season, the story wasn’t quite as exciting, but there were some nice character moments.  We seem to be getting back on track for decisions that could truly go either way.  And it feels like Telltale still hasn’t managed to get the bugs worked out yet.  I expect much the same the rest of this season, honestly.  Hopefully for the next season, they abandon the last generation of consoles and re-optimize (or re-design) the game engine for the current gen.  Even if they don’t, though, the games really are worth playing just for the quality of the storytelling alone.