Mortal Kombat 9 took some major chances when it came out several years ago, but those chances paid off in spades as the team at NetherRealm Studios managed to breathe new life into the fighting series. Mortal Kombat X does not stray terribly far from that formula, but it does refine it in making the best Mortal Kombat game to date. 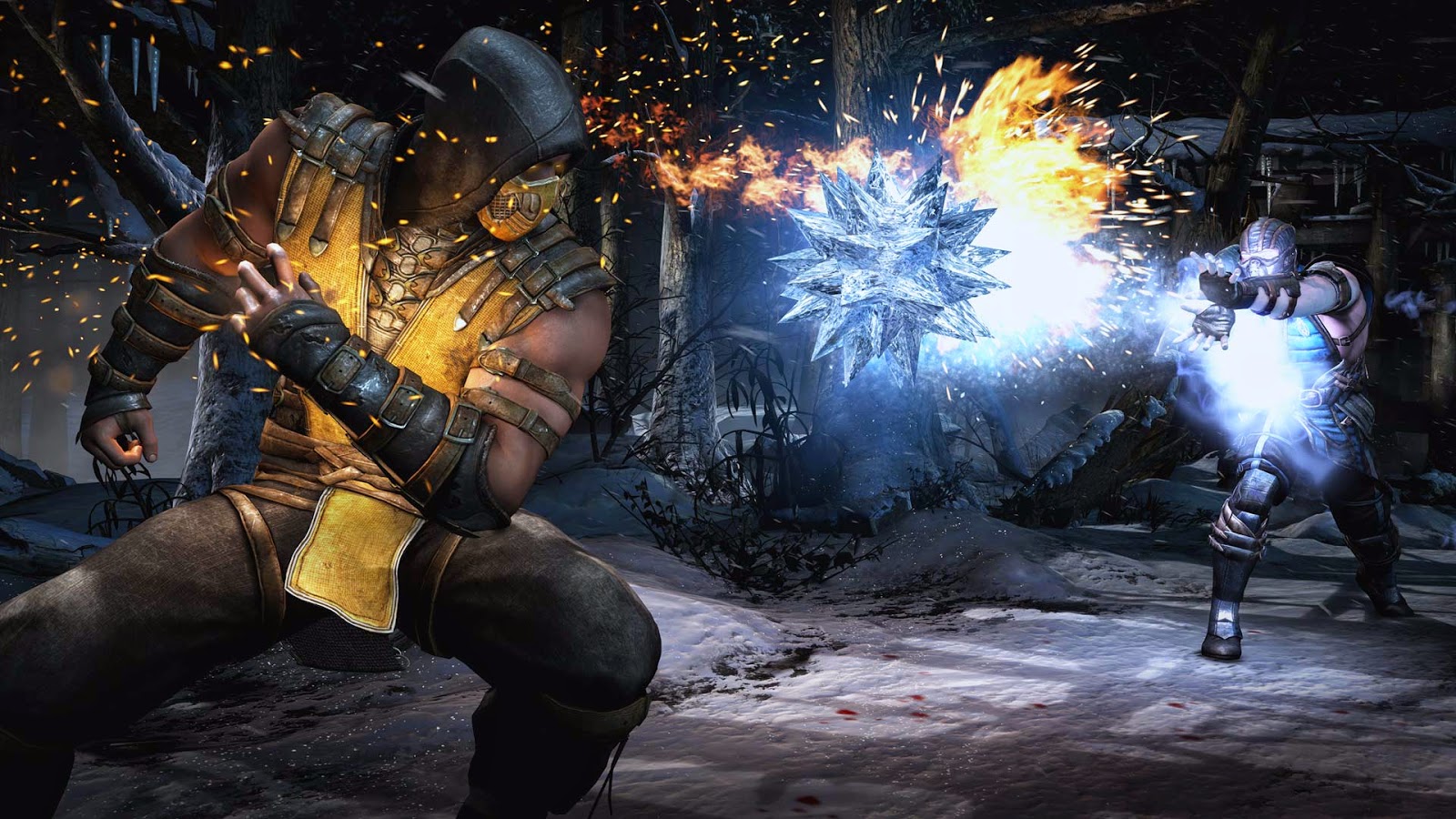 To say Mortal Kombat had grown long in the tooth would have been a painful understatement. Any gaming series that has been around this long is bound to have a misstep or two along the way, but Mortal Kombat had been trending down an almost Sonic the Hedgehog like path where each subsequent release seemed weaker than the last. Then Mortal Kombat 9 came out and the series received a much-needed facelift. In fact, the infusion proved so successful that the development team actually made much better use of their DC license than they had during the ill-fated Mortal Kombat vs DC Universe, which had some interesting ideas but the execution fell quite flat.

Injustice: Gods Among Us showed that the core fighting could hold up, even without the brutalities and fatalities that Mortal Kombat was so well-known for. Mortal Kombat X does try to infuse some new things into the formula NetherRealm Studios has used over its last couple of games. Characters are still large and detailed, and the ridiculously brutal X-Ray attacks you can pull off when your momentum bar is maxed out still can chip off roughly one third of an opponent’s life – and yes, there are fatalities and brutalities galore. However, the inclusion of variant combat styles, living towers and faction wars help to complement an entertaining story mode, a bigger-than-ever Krypt and more bonus content than you can shake a stick at.

I will start with the story mode, since this was the first thing I dove into after spending just a few minutes in training to reacquaint myself with the combat basics. Running several hours long, you take on the role of most (but not all) of the title’s major characters one chapter at a time. During each chapter, you wind up in a series of fights that help to advance the storyline. Some notable trends start to emerge as most characters barely manage to escape death over and over again. It makes sense if you want to see these characters part of the story at a future date, but the third or fourth time it happened, I found myself chuckling each time someone lost a fight and ‘faced death’ – because I figured odds are they would live to fight another day. That being said, despite some of the ridiculous comments made here and there by specific characters, the story was overall an entertaining beast. 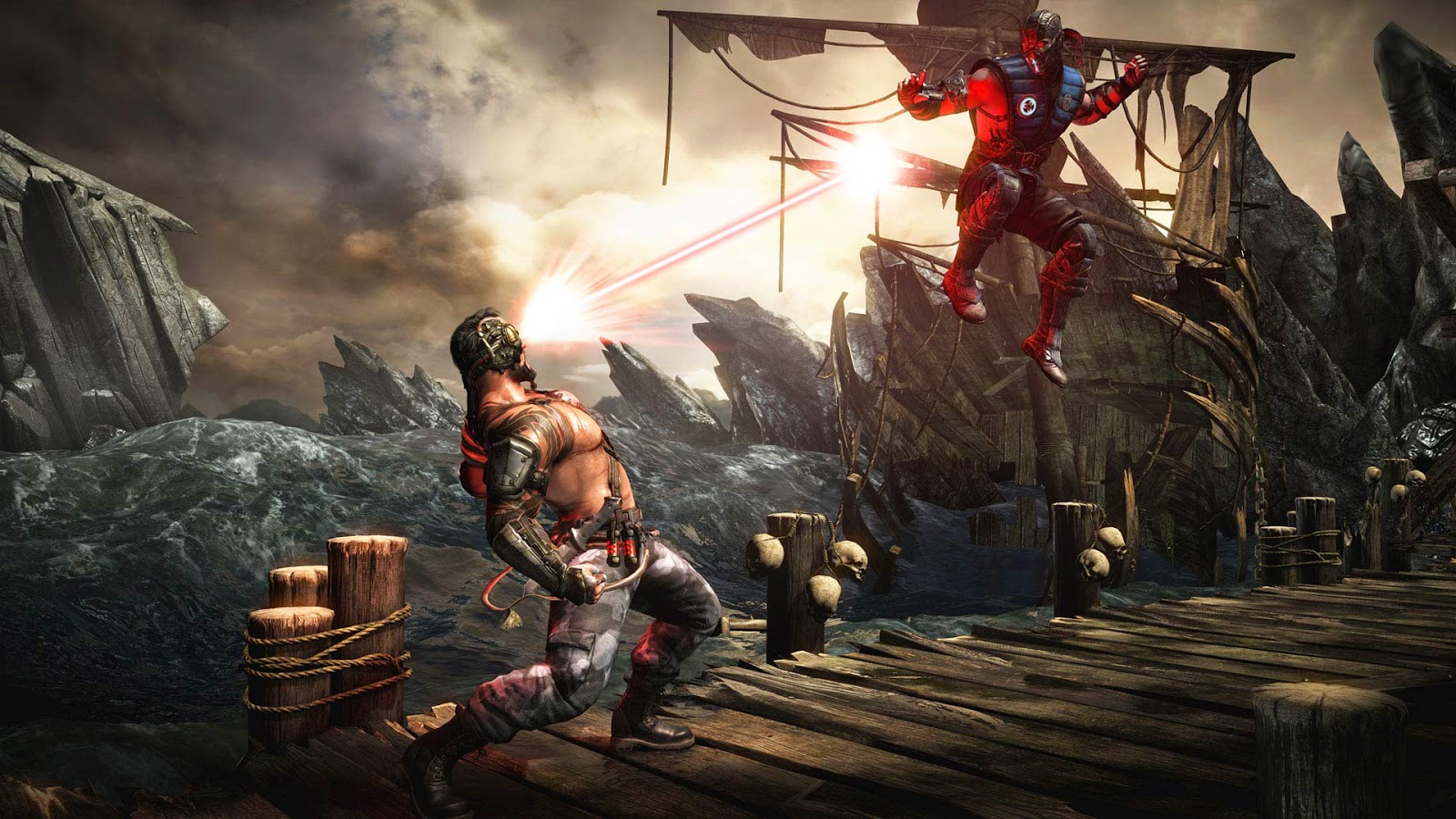 However in the story mode, there is no delivering of fatalities or brutalities. Once the story was done, I moved onto the various types of towers. The test your might is a button-mashing test of wills that only really forced me into multiple tries for the last two challenges. The last one in particular actually made my arm tired, but I got through it. Survivor modes provide a ridiculously long, never-ending challenge that actually appeals to me less than the remaining couple of modes. Testing your luck adds all kinds of modifiers to the combat. Any number of insane things might happen, from tilting levels, to missiles to electrified floors, floaty gravity mechanics and so much more. This is not my favorite way to play because so often skill takes a backseat to luck. The classic mode is what you would expect to play in the arcade – just a series of escalating challenges that culminate in a boss fight.

There is a new Faction Wars mode that is briefly touched on in the beginning. You pick one of five factions that then are weighted against one another throughout the week. You can jump ship from one faction to another if you are so inclined, with a maximum rank of fifty within each of the factions. You can unlock some new, somewhat generic fatalities and it is nice to see yet another way of tracking a player’s progress. Even if you are playing offline modes (like I am prone to doing), you earn points that dump in to help your faction. The idea is neat, but in the first week alone one faction was receiving way more traffic than the others. If you are interested in winning, it seems as though everyone would eventually migrate over to that faction, which totals and resets each week. This is one of those modes that will merit observing over the coming weeks.

For those looking for something else new, there are the living towers. These come in different flavors such as hourly, daily and one called premier (that looks like it might be a first-week exclusive. Beating it unlocked a skin). These tend to shake up the rules. One of my hourly towers added electricity to attacks and the additional damage ramped up by the round. Another hourly tower changed up the rules match by match. One time it was first hit wins, another time there were missiles launching from the background. One of the daily dungeons was a mix of things. One round might be a test your might button masher (breaking ridiculous things like a large fish skeleton), another round might be a test your luck where random modifiers were applied to the combat, and then the third round would just be typical combat. It then cycled through those a couple more times until the tower was completed. 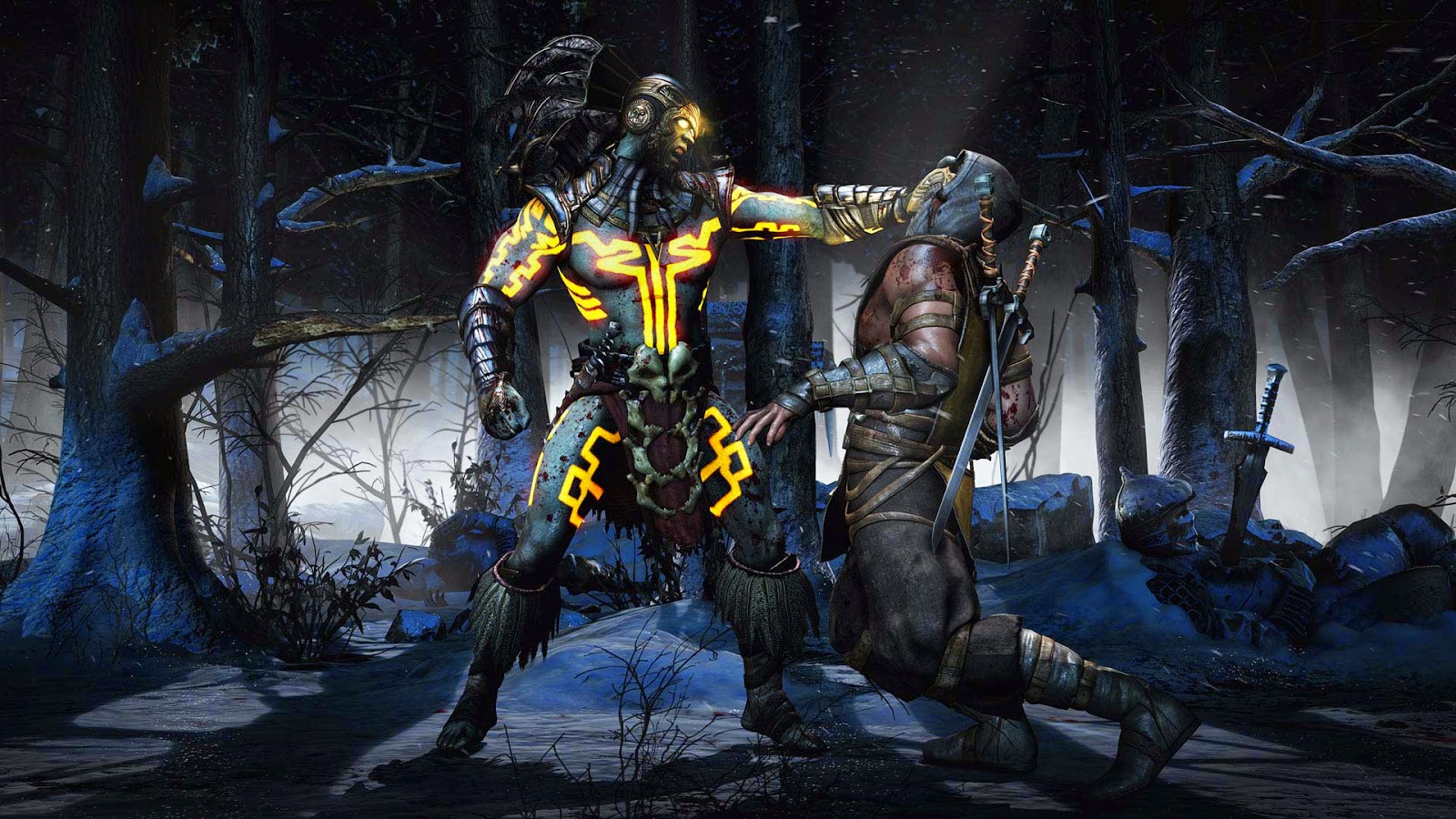 There are plenty of online options for combatants as well. Just quick matches, more involved modes like King of the Hill and tower variants give players a good deal to sink their teeth into. The biggest issues right now with these modes as well as the living towers relate to how popular the game is. It is obvious that the servers are sometimes struggling to keep up, with long stretches of time where the living towers are not available or player versus player battles taking upwards of five minutes to find a match. The fighting itself online is fairly smooth, but there is some delay and fighting games are perhaps the most frustrating genre for me to play with input delay outside of a handful of sports titles (I can cope with it in football or baseball, but in basketball games the lag drives me crazy). It is nice to have the option for online matches and they work reasonably well, but I prefer the local competition personally.

Having been playing Mortal Kombat since the first one made its way into the arcades, I have seen the series go through its ups and downs, but the over-the-top brutality that helped the very first game stand out is alive and well today. Mortal Kombat used to have quite the rocky relationship with some groups, leading to things like the replacement of blood with sweat on home consoles. Here Mortal Kombat X embraces its violence completely. Normal punches and kicks feel hefty and characters grunt and cry out on impact as you would expect. Special moves involve everything from fireballs to bicycle kicks to more grotesque limb breaks or even guns and swords being leveraged.

The aforementioned X-Ray attacks are a series of scripted blows that deal massive damage if the first hit in the sequence lance. Erron’s bullet blasts into a target’s hip, working upwards until striking near the collar bone and then blasting through the target’s jaw. Arrows go through the eyes, staves crack the backs of skulls and stomped spines splinter during these brutal assaults. Of course when the combat ends, you have the opportunity to put a bow on the entire package. Either the in-combat brutalities (some of which are much easier to perform than others) or fatalities. The brutalities are the actual killing blow. Meet the conditions and the blast from a gun might hollow your opponent’s head out right then and there, or you might take that arm bar a bit further and break it off at the elbow. 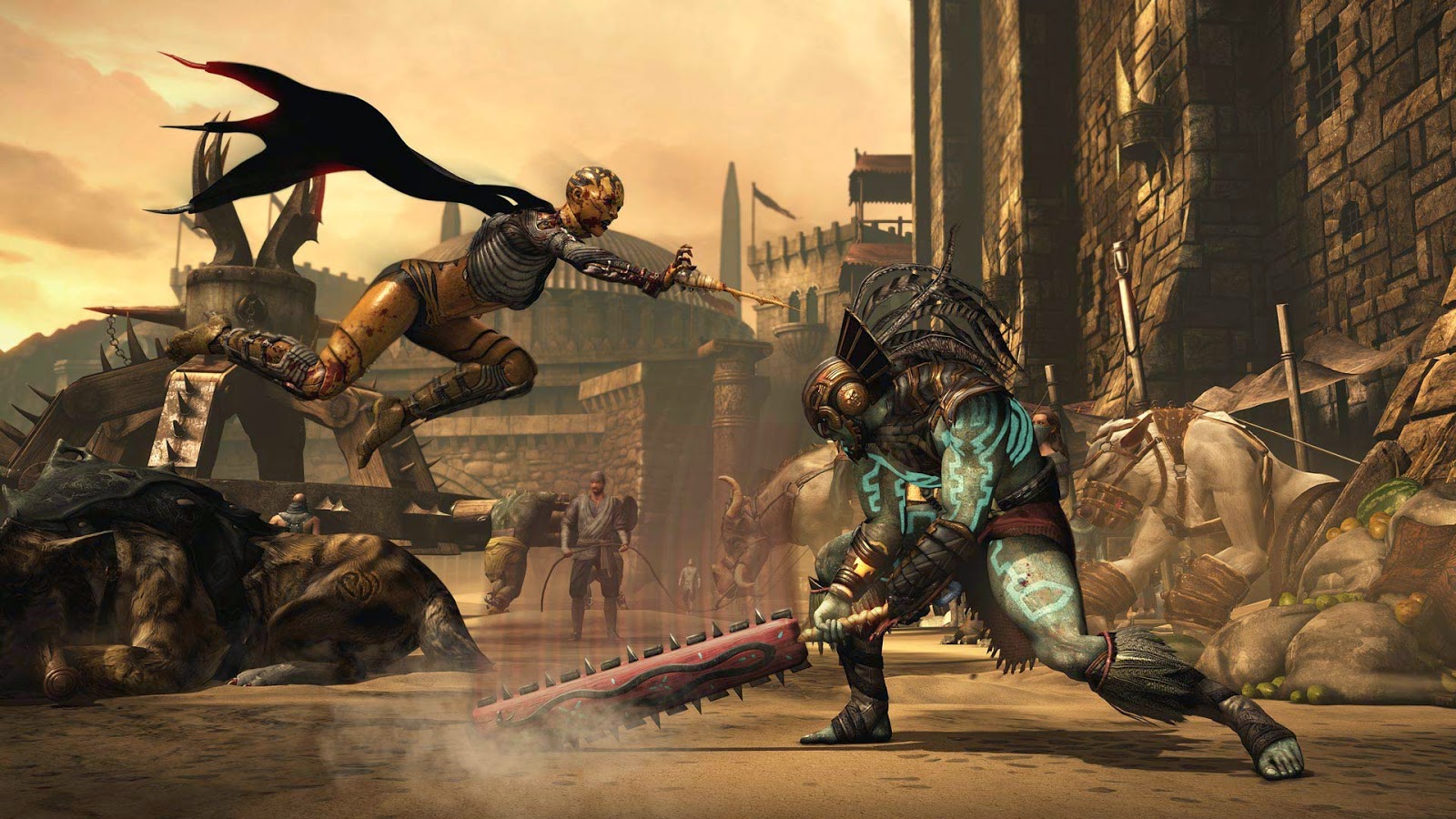 Fatalities are gorier than ever, and like years past rely on a specific sequence of button inputs from a specified distance. Each character has two, and while much has been made of the ‘easy fatalities’ option (more on that below), the fact of the matter is only a handful of them are really all that difficult to pull off. They are incredibly over-the-top, whether Sonya is calling in a drove to laser off your arms or Johnny Cage is ripping through is opponent from behind to play peek-a-boo with the camera through his midsection while declaring “Here’s Johnny!”, they are all worth seeing once and should satisfy gore hounds who think of fatalities when they think of Mortal Kombat.

For me the most important thing is the combat, and Mortal Kombat has never felt quite as precise as a Street Fight game, nor as button mashy as something like Dead or Alive. It straddles a line in between with easy to use special moves, overpowered uppercuts and a use of environmental objects. Similar to Injustice, you can pick up items in the environment to throw (including people!) or to jump off of to clear some space between you and your opponent. The stages lack the same kind of explosiveness that Injustice had, with multiple layers of carnage taking place if you blast your opponent off of the edge of the screen. I always enjoyed those in Injustice, but the stages look and perform beautifully in Mortal Kombat X without those stage transitions.

For those who liked the Krypt last time around, Mortal Kombat X brings you even more. The environments have been added to, with some really light interactive elements as well. The majority of your time is spent walking around spending your earned koins (yes, that is how they are spelled) from combat to unlock music, concept art, brutalities and more. Sometimes a creature will jump out at you and a small quicktime event allows you to kill said critter for extra currency. There is more than just a graveyard as well, with locked gates, underground spider tunnels and more. Finding items such as a character’s hat or staff can help you to unlock a previously blocked path, allowing you to unlock even more virtual goodies. The completionist in me loves this.

Mortal Kombat X is gruesome, even gross and certainly not meant for everyone. The online features are well thought out, though the servers are struggling to execute them right now due to the release. Beyond that the combat itself is good, but not my favorite – though the ability to gain levels, improve in a faction and unlock collectibles complement multiple modes including a roughly five hour storyline that makes this latest offering my favorite one yet.