Paperbound is a crazy sudden death affair where players can change their gravity, throw scissors and ink pots to take out their opponents from afar or move in close to take them out with a melee strike.

To pick up from where my original preview left off, all I have to say about the final release is: Damn.

Upon full release everything feels just as smooth as it did before with one exception. It now has more content! 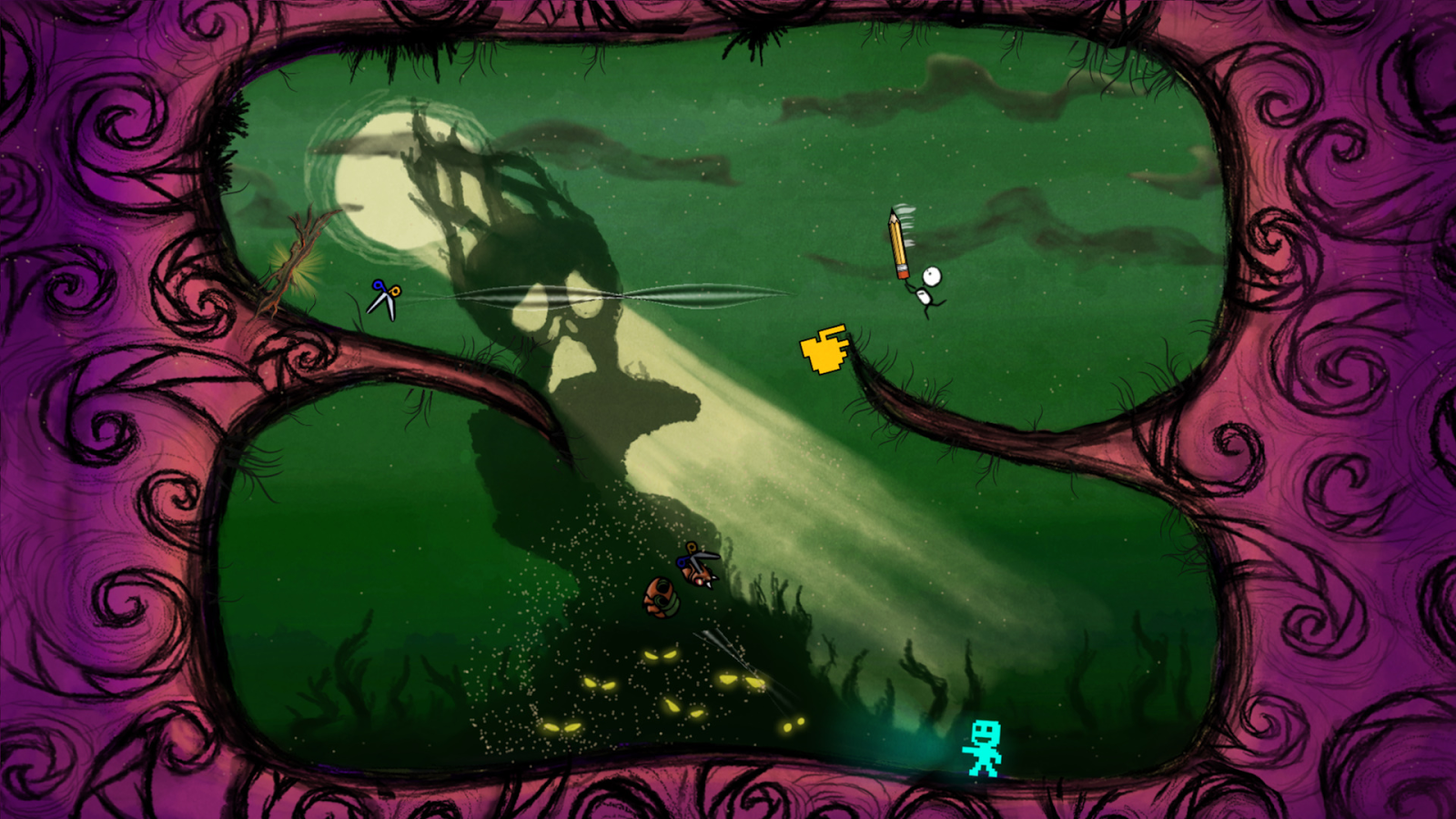 Players now have more levels and character models to do battle with. Each map lists the proper amount of players for an optimal gameplay experience which was more than fun to ignore in certain cases. Four Players on a small level turned the level of craziness through the roof and more often than not you will find yourself respawning and have no idea as to what actually happened. The recommendations should really be taken to heart… or not if you really want to turn things up like we did!

The game is designed to work well with controllers and players will find said controls to be rather smooth once you know what everything does. In a way, I find it hard to review this game as the previous build that I played and wrote about already felt flawless. What do you say about a game whose gameplay mechanics are still just as smooth? Combat is still extremely fast paced but never unfair. Players can still parry in melee attack or deflect a ranged one back at the thrower instead of being hit with it themselves. This takes the sudden death concept to a new level as the one-hit kill has to truly be worked for. While new playable characters skins have been added, the true level of detail can be seen in the now five available books that work as the stage selectors. Each book contains unique stage and background designs. Still available is the ability to run on the floors, walls, and ceilings while changing your gravity to fly across the stage to slash at your enemy. But beware of the last Book… they removed the walls and if you’re not fast enough you’ll find yourself losing score points to what amounts to a suicide.

While there are cool level designs in the first four books, the Final Book was the craziest thing that could have been implemented. Here players will find themselves battling on floating and rotating platforms in which some can lead to a death if you’re not fast enough. Two rotating bone structures that get too close to each other can grind the player into fine powder if they happen to still be standing in the right spot and focused on something else. This final set of designs was simply insane (but in a good way!) as not only do players need to pay attention as to where everyone is, players also require paying attention to the stage if they do not want to see a decrease in their score. Believe me when I say that no one wants a negative score. It’s just embarrassing to see that run up at the end of a session. In a way – that is what Paperbound is all about though: bragging rights and fun among friends.

Paperbound is smooth, slick, and gorgeous to look at. Never having any real downtime allows for the quick paced nature of this style to keep the pace high as players do battle in funky environments and crazy situations. Who seriously flies around throwing scissors at people? You do and it couldn’t be more fun to send it back with a well timed melee strike. In this game you are encouraged to run with scissors, take that mom! Whether it comes down to new content such as game modes, environments, or simple something new, I can’t wait to see what these guys come up with next.