There are two things that I never thought that I would see together. Dodgeball inside of a Disco Club. The result? Decent amount of time spent bobbing my head to various techno and trance tracks while trying not to get hit by incoming projectiles.

Robot Roller-Derby Disco Dodgeball pretty much says it all. Or does it? 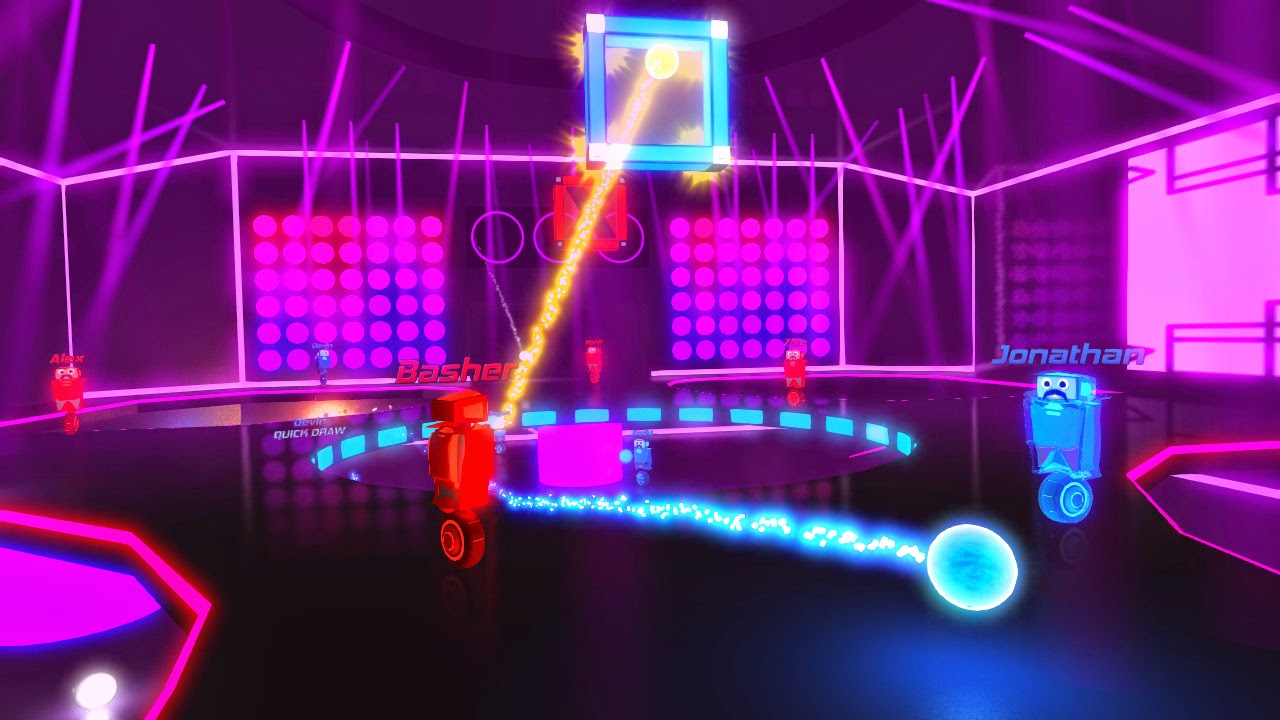 Players will find themselves playing dodgeball inside of an always changing disco club through a first person shooter view..Dodgeball does more than one thing differently in order to separate itself from the crowd as just another First Person Shooter with a funky idea. In order to throw a ball at an opponent the player must first pick up a ball.

So after picking up the ball, the hunt for a target can then begin. Players have several options available to them when it comes to throwing the ball once an unfortunate victim has been selected. Players can charge up their throw in order to throw the ball at higher speeds to reach longer distances or on the flip side lobbing the ball can sometimes be more than enough if an opposing player is right in front of you or unsuspectingly turns a corner into your field of vision. Making that decision can be the difference between taking out a member of the opposing team or being taken out yourself. Dodgeball is a harsh, dog eat dog world Either way, it really won’t matter how you throw the ball if your opponent catches it resulting in your robot exploding. Wait he does what? 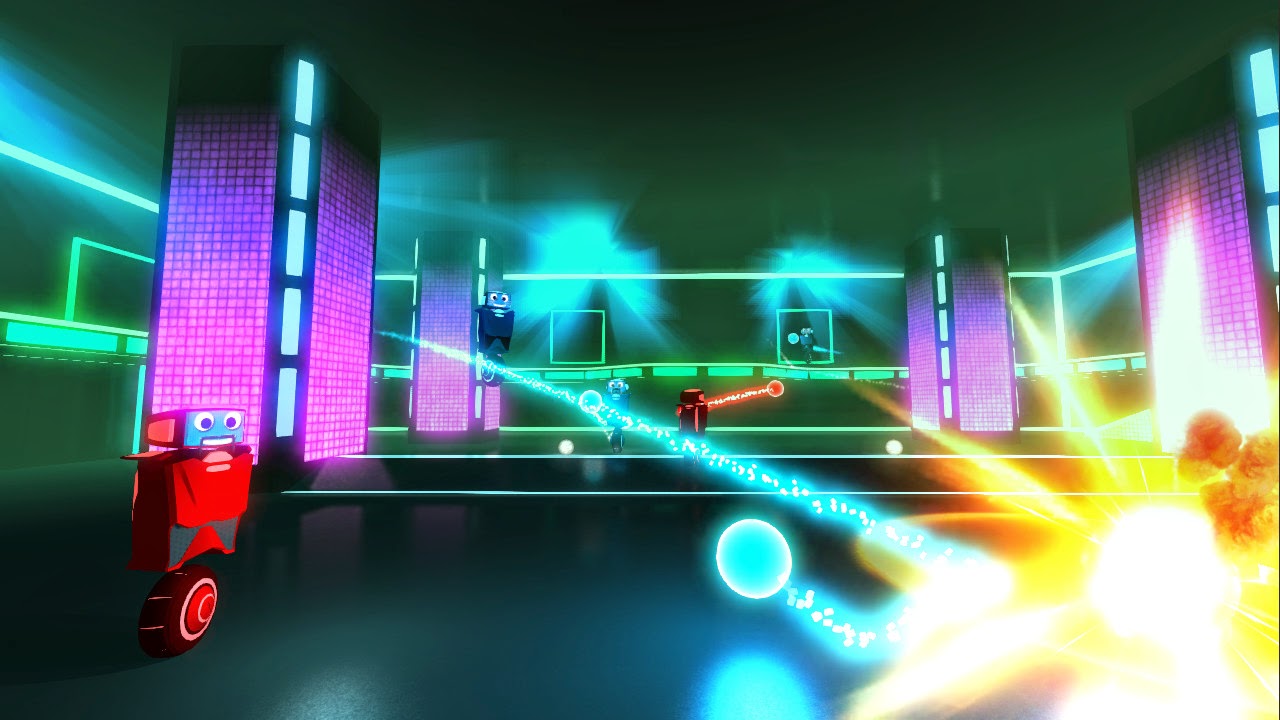 Catching a live ball, as within the official rules will result in your robot exploding and sending you back to the respawn point. Players will see if a ball is still live as it will be highlighted in the colour of the opposing team. This feature was rather well done as players could always tell which team they belonged to as the interface will change to match the team. Does that mean you won’t be throwing the ball at your teammate as they pass by? Not likely as sometimes reactions are faster than thought… I eventually got a bit better.

Switching it up constantly, the disco club can come in a variety of different shapes and sizes with different floor elevations, ramps to make jumps, and pillars to block views. The level designs felt really well done adding an extra layer to the already smooth gameplay.

The last, and possibly most intense portion was playing online. Jumping into a random online match was more than satisfying, win or lose. I’ll be honest that there were more lows than highs in the beginning learning exactly when to throw as players do not move like computers. Once the highs started though, getting six people in a row was awesome! It more than made up for getting hit six times in a row shortly after. 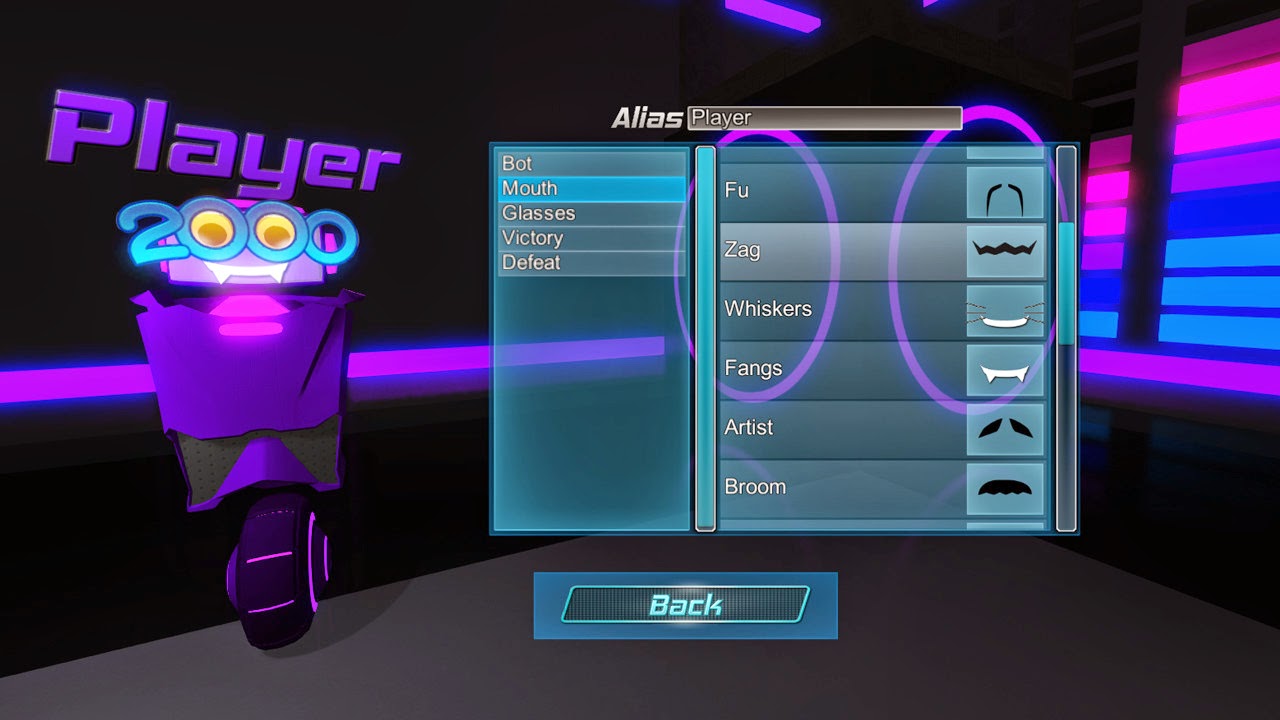 While playing the single player modes were entertaining, playing against other players felt much livelier. I’m not quite sure what exactly made it feel that different, but I’m sure the crazy stunts some players tried every now and then had something to do with it. Now thankfully there was more than just a simple Deathmatch to play through regardless of how much fun that alone was.

Along side Multiplayer Deathmatch are six other modes including Score Battles which rely on the first to a certain score based on the epicness of a shot such as pulling off a ricochet or hitting people mid air. My more personal favorite was a mode called Hoops in which players essentially played a dodgeball version of basketball where honestly just about anything ended up being a legal move. As many times as I tried I was quite happy with myself to pull off a ricochet from midway through the level up into that tiny box. I felt like I could retire after that point! Did I? Not for another hour or so.

For an Early Access, Robot Roller-Derby Disco Dodgeball is already fairly impressive and incredibly smooth. Not once did I end up having an issue that wasn’t related to my lack of skills in a multiplayer shooter environment. This game definitely has more than just an awesome title going for it!