In 1987, the world first met Samus Aran, and I fell in love.  In ’91 and ’94, we collectively enjoyed the second and third games, and the Metroidvania subgenre was born. 2002’s Metroid Fusion was the original reason I bought a GBA, and the reboot of Metroid 1 in 2004 was the last we heard of the 2D Metroid series. 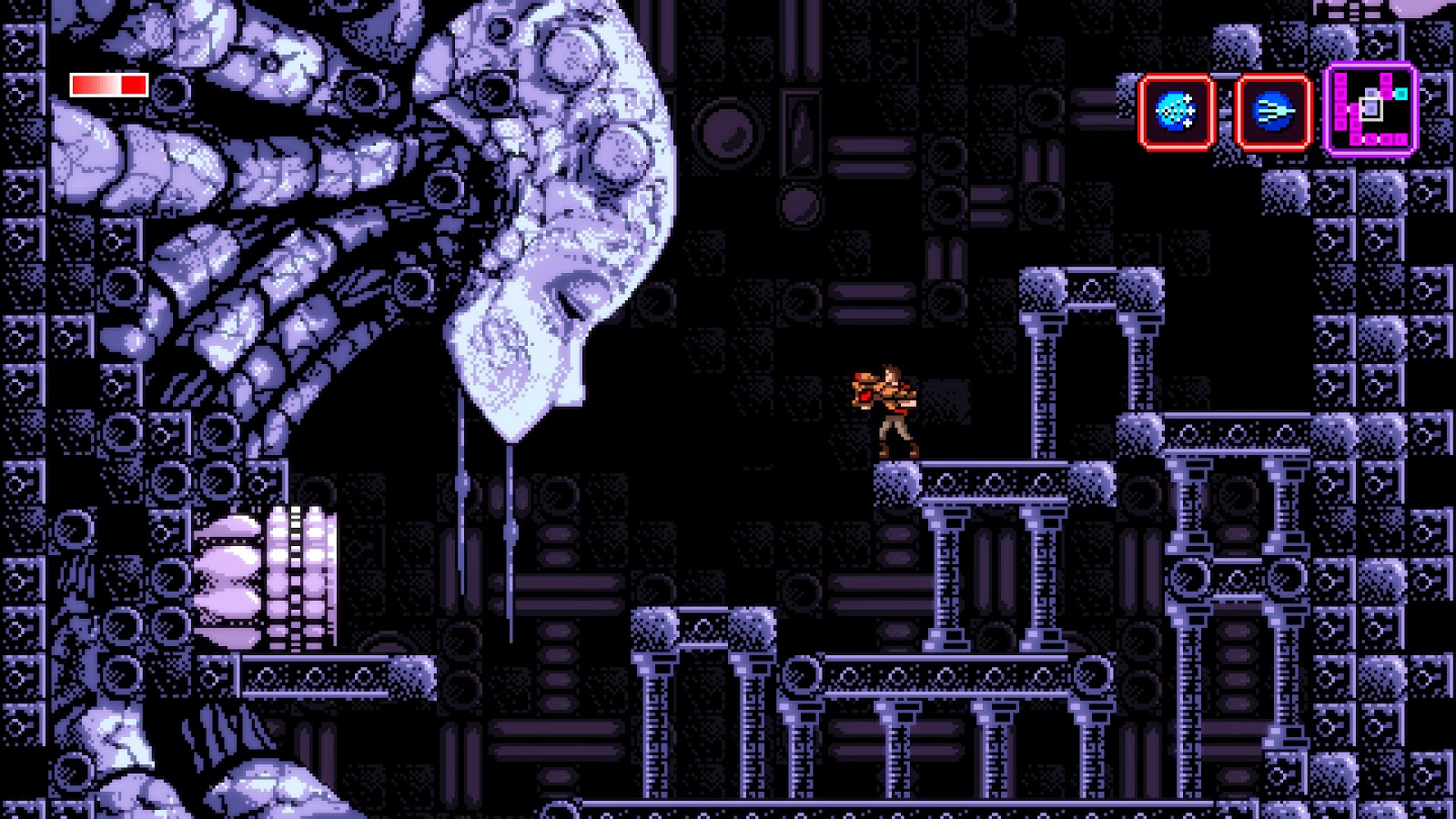 …Until, that is, a horrible lab experiment takes the protagonist, Trace, to an alien world and leaves him to his own devices. The story remains vague, at first, and unfolds at a steady pace that never leaves you starving for or inundated with plot, allowing you to let the storyline of the game do what it was always meant to do: provide a reason for awesome gameplay to happen.

I compare this game to the Metroid franchise because it is, for all intents and purposes, a Metroid game. The gameplay, the exploration, the upgrades, the story, they all scream Metroid, and to be fair, with how great those games are, that is not an unkind comparison. Rather than try to avoid the comparison, Tom Happ seems to have embraced it and improved upon it.

There are a staggering number of weapons in Axiom Verge, and they vary in purpose, utility, strength and usefulness by which area you are in and what you are trying to do with them.  With only a single exception, every weapon is ‘optional’ and is more a matter of preference and play style than it is outright required for the sake of progression. The one that is required is used for two, perhaps three locks, a single boss, and then you are free to never use it again if you so choose. The other twenty weapons vary from a standard vanilla ‘bullet’ type shot, a boomeranging returning shot, a fractal-splitting weapon that fills the half of the room you’re facing with a spray of death, the almighty (and my second favorite) lightning gun, or the secret weapon that can only be obtained from glitch worlds. 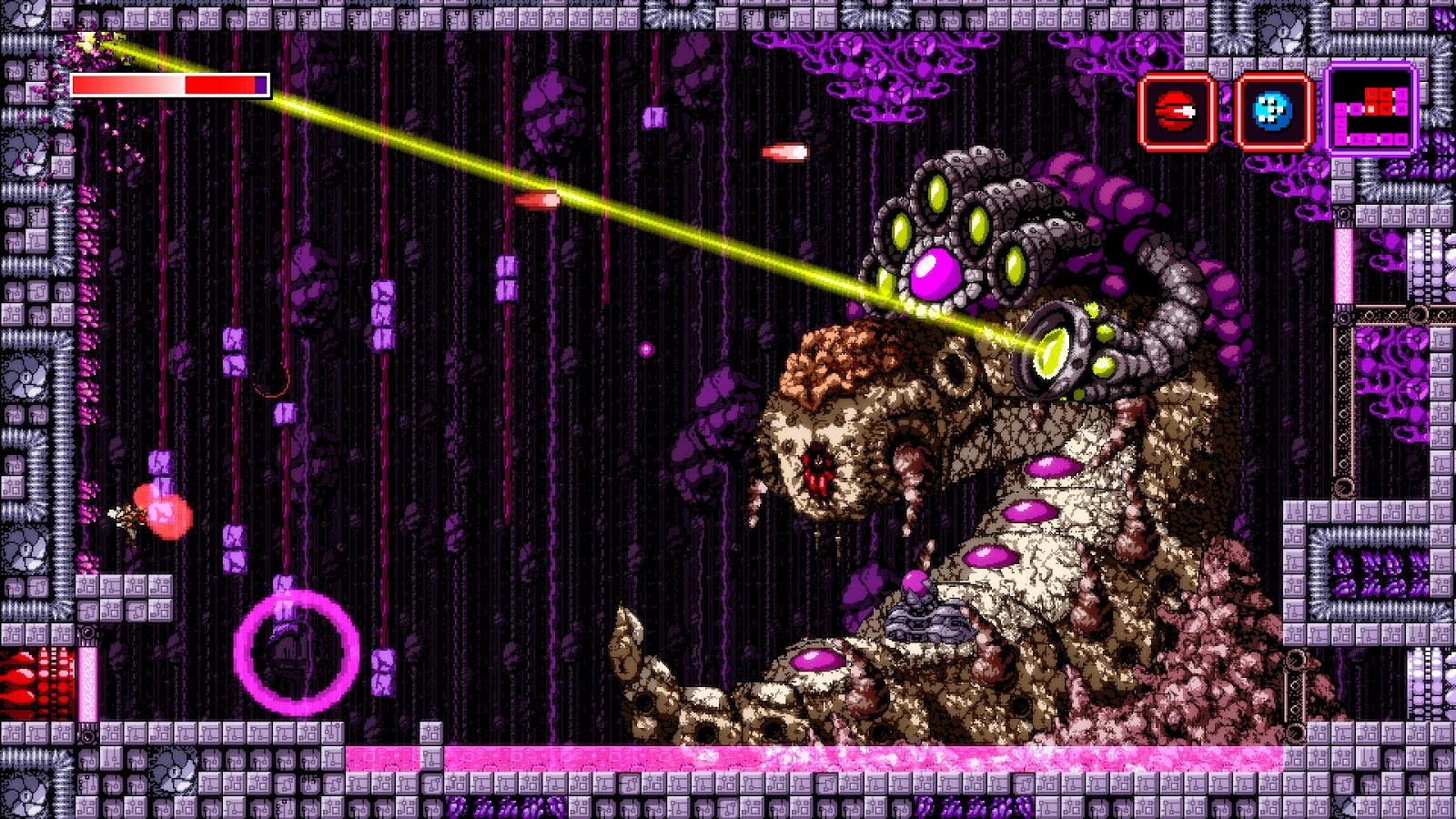 Glitch worlds, what are those? Well the story that I alluded to earlier essentially has that there is a corruptive element to the world, the noise in the signal to noise ratio if you will, that manifests itself in the style of classic NES visual glitches. Between buggy characters to distorted pixelated echoes of what once were, you eventually gain the ability to cause these glitches with a form of ‘glitch gun’. This is not a powerful world-breaking weapon, so much as it is a puzzle solving tool that you may or may not get use out of. The first time through the game, I used it thrice at the most, only when it was needed, and I wrote it off as a fairly inconsequential tool in my arsenal, but during my second go through this masterpiece, I made a point to both drill more walls and glitch more enemies, and I was amazed at what awaited me.

Pools of acid can be turned solid, enemies can be converted into loyal minions that you control just like Trace, you can manipulate what drops you will get from some enemies by converting them to their glitched forms, and some creatures even break through walls or become transportation after they have had their addresses disrupted. Not just enemies, though, but there are places, randomly selected in the world each game, where the whole world looks like someone didn’t put the cartridge all the way into the console before turning it on. These areas appear to be randomly generated, and can yield bonus upgrades that go above and beyond your item completion %, as well as, arguably, the best weapon in the game. 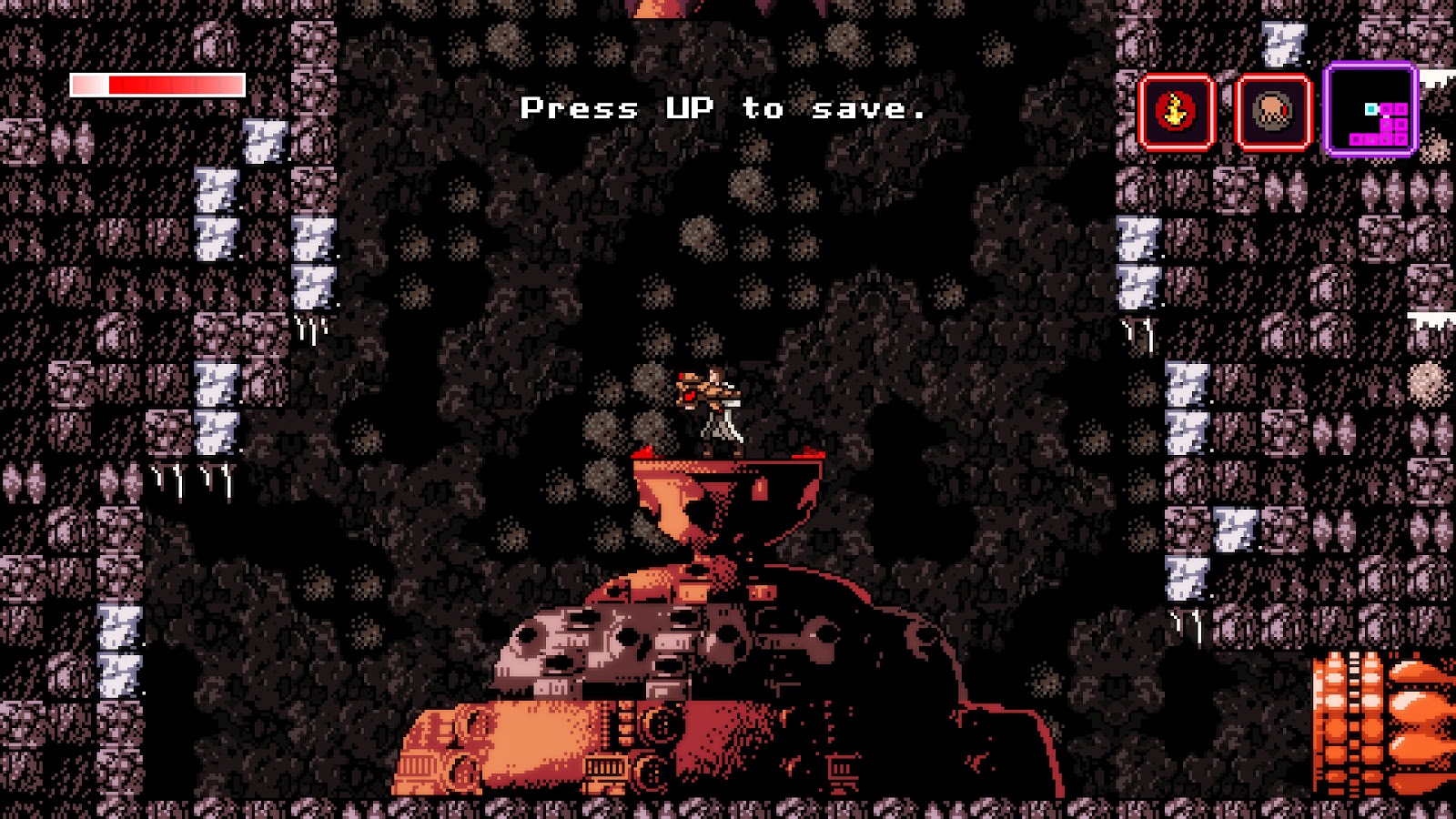 So what was everyone’s least favorite part about Metroid games past the first? Bomb jumping. Nobody likes bomb jumping, everyone does it though, and Axiom Verge once again seeks to improve upon this mechanic instead of running from it. Instead of destroying every bone in his body, Trace can launch a small 1×1 block sized drone. Upgrades later allow you to launch the drone further, and eventually to teleport to its current position. Want up on that ledge?  Jump, dash up, launch the drone up vertically, hatch it at the peak of its arc, and then teleport, and you are now about two screens higher than you were. So what does this mean?  You can launch the drone diagonally across a room much faster than you could traverse it. This speaks to more than just game mechanics, but to things that Metroid is known for, despite not intentionally or originally embracing: sequence breaking and speed running.

Sequence breaking is clever use or abuse of game mechanics to get to areas or collecting items earlier/out of intended order. When you die, instead of a game over screen flashing the protagonist in lingerie for a couple of frames, you are instead reborn in the last save room you used. Because of some clever tricks, there are points in the game where you find your ability to backtrack removed; but if you haven’t saved since the first boss, your death will return you to before this road block except, and here’s the important part, you keep all collected item progress. Keeping this in mind, it is very possible to enter the last area of the game very early, and pick up some quality of life enhancements that make the rest of the game your oyster in terms of which order you would like to tackle it in.

In true to Metroid fashion, you are gifted with a modified ending depending on how quickly you execute the primary antagonist. In addition to this, Axiom Verge offers up a speedrun mode, which gives you an on-screen timer, built-in splits after each boss, automatically skips all dialogue and cutscenes, and the exact same random seed is used to determine all of the glitch world properties and locations. This is a great thing for everyone, not just the speedrunning community found in places like srl.com, but also for those of you in the world that look back on Metroid and Super Metroid, before cutscenes, where you were alone in this strange alien world with nothing but a smattering of aliens trying to make you dead, and a boss-rush of bosses trying to make you even more dead than their cronies.

But what does all of this gushing praise about the many aspects of this game that I absolutely adore all add up to? Shovel Knight was THE indie game to have in 2014, and even though we are not even halfway through it yet, Axiom Verge is shaping up to be the nominee for 2015 from me. The graphics don’t blow the mind, but they are not meant to. The music is amazing, to the point that I leave the game running even when I’m not playing it on occasion, the rare times that that is. Having beaten it on the PS4 the day that I got it, and then following up with a speedrun kill and a 100% clear the day after that, I’m working towards my 0 deaths accomplishment right now, although the wasp boss is ensuring that that is not a simple prospect. I’ve likely beaten this game twenty times already, between the steam release and the PS4 version, and I just don’t see myself slowing down in the least. 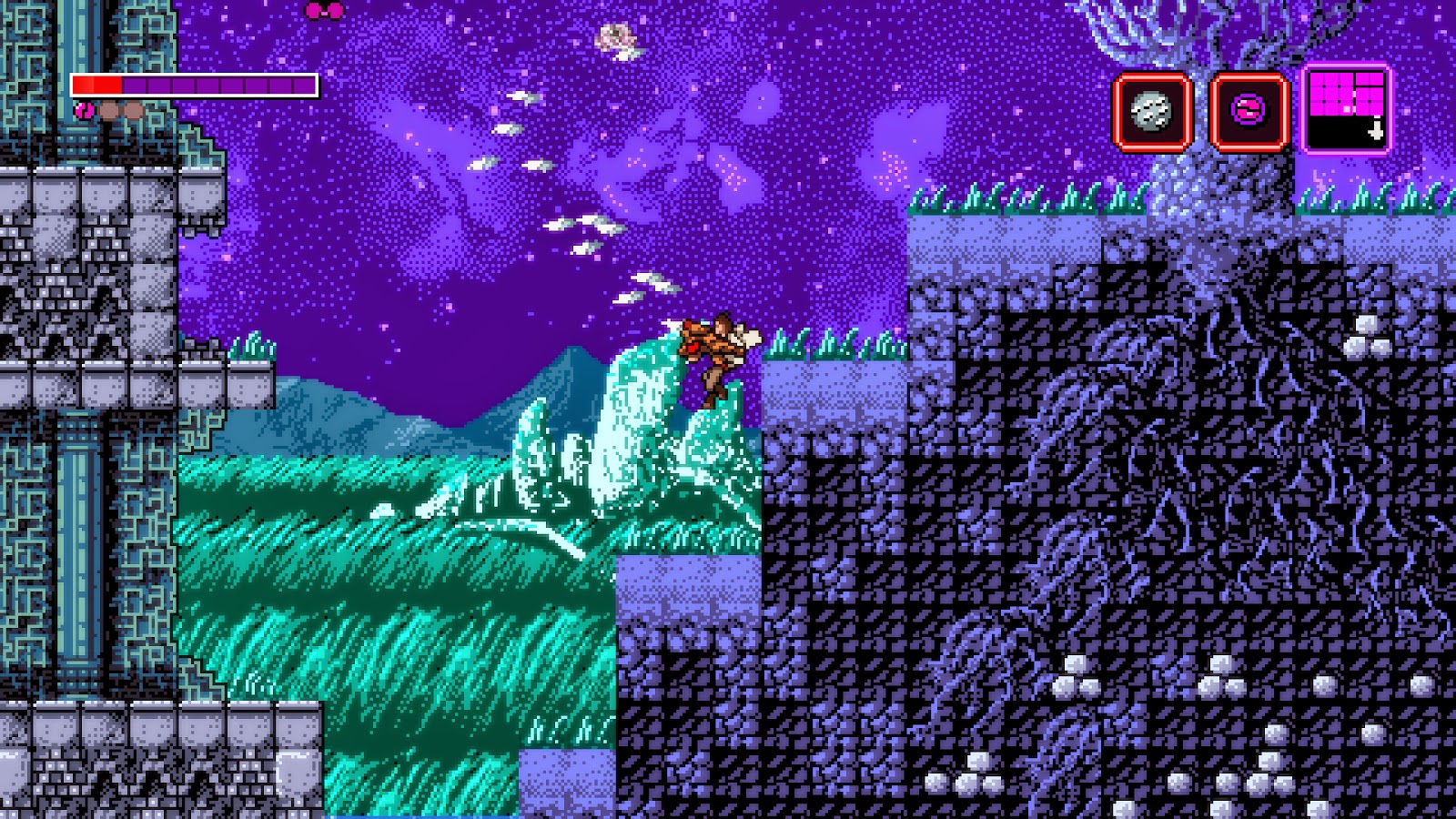 So what’s different about Axiom Verge for the PC? Honestly, not a whole lot. Not yet at least. There is support for any controller you can plug into your computer, not just Direct Input like most developers seem to stop caring after they implement. The game itself isn’t resource intensive, nor does it (thankfully) offer platform-specific content that just makes me yearn for a version of the game that has it all in one. This may be difficult to admit to myself, but it very well may be my favorite Metroid game to date, and it’s not even a Metroid game in the first place.

I don’t believe in giving perfect scores for movies, games, or anything else, but when the site you review for doesn’t allow a 9.99~ out of 10, it really is close enough to make me reconsider everything that I thought I knew about video games.