Throwback games are not uncommon these days. Retro gets applied to graphics, gameplay mechanics and more. Sometimes these nostalgic callbacks work, sometimes they do not. Axiom Verge unequivocally works, because it still remembers the right notes to hit while balancing nostalgia and gameplay, while still showing enough modern sensibility to be fun in today’s gaming culture. 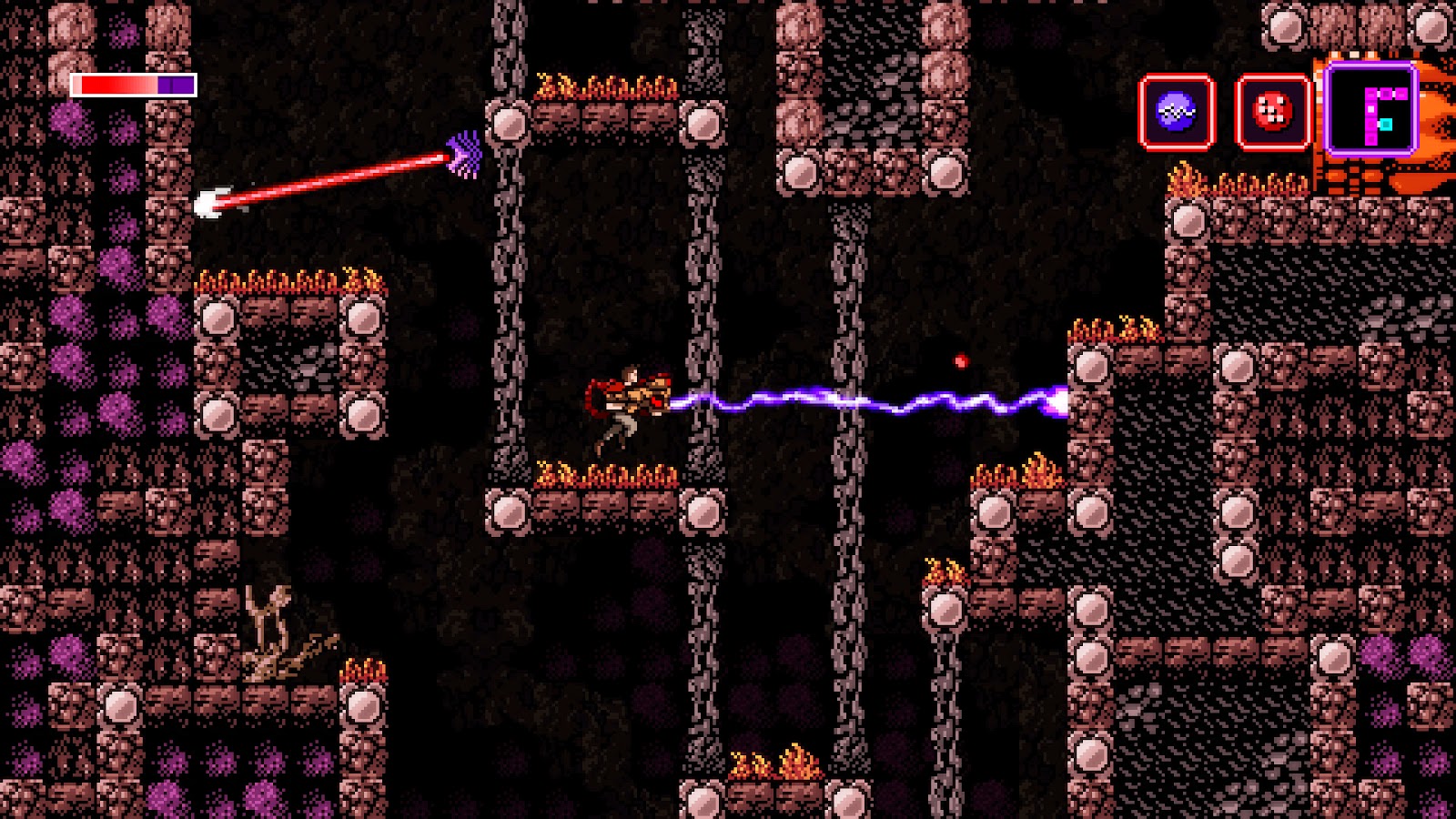 I have never really been a huge fan of the term Metroidvania, because I have always felt that the two series actually are quite different from one another and very few games do both the often unforgiving platforming action of Castlevania mixed with true Metroid style exploration. Even here with Axiom Verge, I feel the game leans towards Metroid far more than Castlevania if you are looking for a spiritual predecessor to compare it to.

With that in mind, you play the role of Trace, you are thrown into a massive world comprised of zones that feel different from one another, while still retaining a unified look and field. Again, the immediate comparison is to Metroid, but those familiar with the NES classic will no doubt find many parallels between the two titles. Where Axiom Verge excels is not just in paying homage to one of the best NES games of all time, but deftly taking some unexpected turns throughout the game. Just when you think you have the pulse of Axiom Verge, a feeling likely fueled by the similarities to Metroid, the game manages to surprise you. 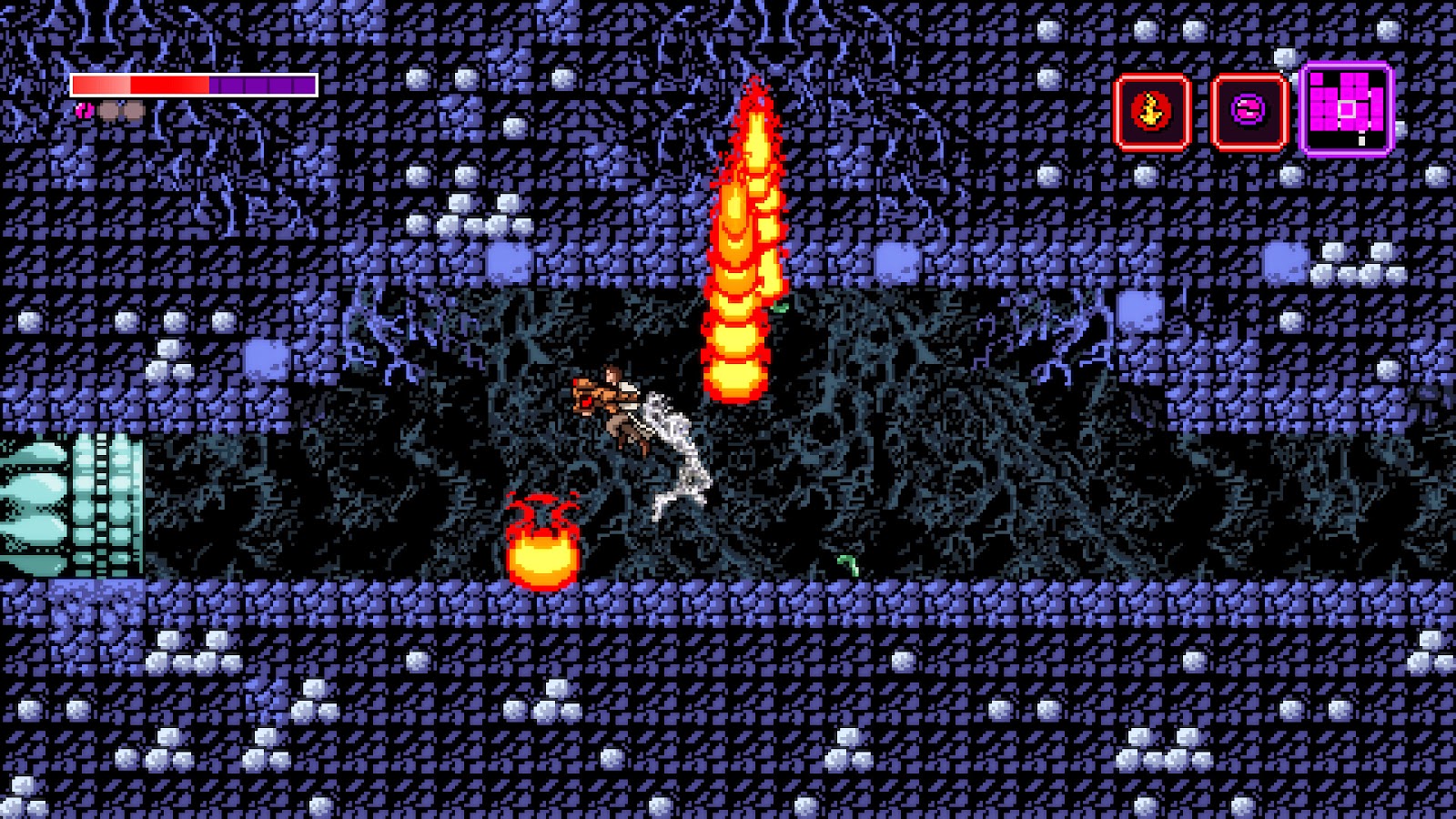 Some of the core functions such as weapons doubling as tools to progress through the environment, but this is one impressive array of weapons. A lot of thought went into making these, and none really feel like throwaways because they usually have multiple uses. The environment is cleverly designed, with problem solving a key element in progression. This to my mind, has always been the primary difference between a game like Castlevania and Metroid. Castlevania is more about platforming and reflexes, even the more puzzle-centric Simon’s Quest. This was especially true of the first and third games in the series. You were not battling environmental puzzles to advance, just hordes of floating heads, undead creatures and perilously moving platforms.

Platforming is still very much a part of what Axiom Verge has to offer, but cheap hits take a back seat to navigating passages that are more about having the right tool for the job and thinking outside of the box to reach your goal. Bosses are weak to specific types of weapons and have their own patterns that make them surmountable but challenging as well. This really creates a rewarding sense of exploration that combines with a surprisingly solid story. 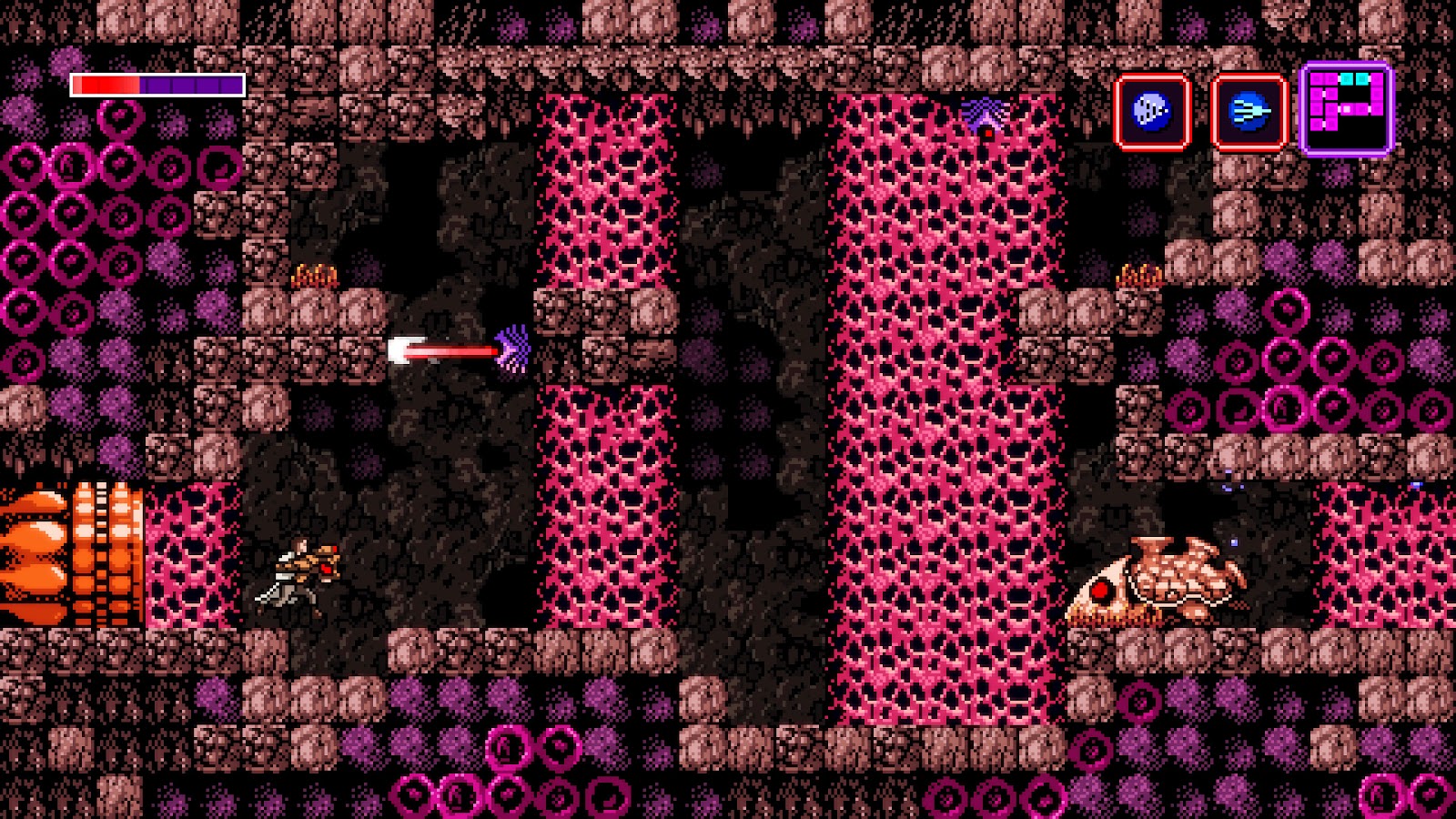 In fact, this is one of the areas where Axiom Verge really excels. In telling a good story, searching for upgrades and more, the design of Axiom Verge does not generally feel dated. There are still a handful of conveniences that players are likely used to, like a better mapping system, that would have been nice, but by no means is Axiom Verge completely lost in the past. It knows the right notes to hit on to maximize nostalgia, but seldom feels like a frustrating product from a bygone era. Mostly. There is a lot of backtracking and sometimes the solution to advancing can feel a bit obtuse in a day and age where games tend to hold players’ hands a bit too much, but all in all the experience proves to be a rewarding one.

Axiom Verge fills a gap in gaming that many players have been waiting to see filled for some time. That there still is not a good new Metroid game for the 3DS drives me a little (possibly a lot) crazy, but Axiom Verge does the job in spirit, if not in name on the PlayStation 4. Trace’s adventure is absolutely worth undertaking for those gamers like me, who have missed playing a proper Metroid title over the last several years.