I love a good four player local multiplayer game where everyone can be in the same room to yell at one another regardless of what happened so when the idea of Brawl came around I figured it would be perfect as I already had several people coming over that I could throw controllers into their hands. Knowing that it was like Bomberman was going to make for an interesting experience due to the creepy music, macabre artwork, and special powers. 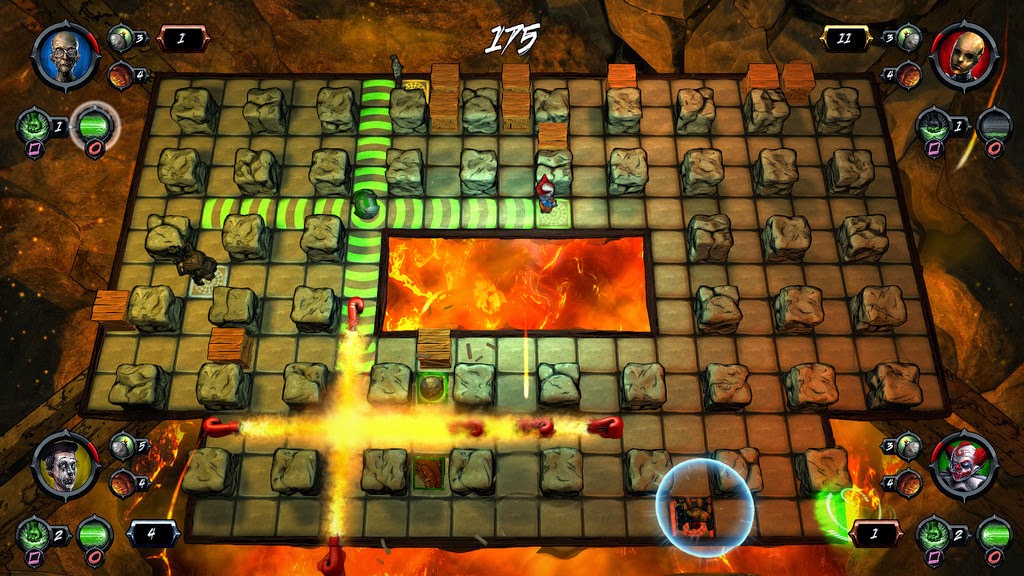 Brawl interestingly enough comes across almost as two separate entities as both the Single Player and Multiplayer are actually rather distinct from one another. The Single Player story mode finds players following a character of their choice through several levels, each with narration and backstories fleshing them out as more than just character skins. Multiplayer on the other hand is a straight out brawl between players in a variety of different formats.

Each character’s story helps the player gain a better understanding on not only the gameplay, but also tactics that can be used in regards to the chosen character. As each character is unique from one another in more than just appearance, the special abilities are going to require some getting used to; for example, the little girl and her teddy bear can throw a knife at a wall or even at someone to switch places with them through a form of dark magic. Place yourself within a wall of your own bombs, swap, and your enemy never really stood a chance if you timed it right even if they have an ability to throw the bomb away, the rest will do the trick. Learning each characters special abilities will definitely give a player an edge over the others especially if they do not see it coming.

Narration of each character is all done by the same actor, though it is very well done. This voice knows everything, it can be amused just like it can be angry. It is the voice of the emporium and honestly? He is a real jerk as he is manipulative and he will try to get what he wants by any means that he has access to. But while he taunts you, and he gets mad at you for foiling plans, he also acts as an advanced tutorial putting the players through trials and battles against other characters all while giving the player more information about the selected character in the form of several cutscenes. 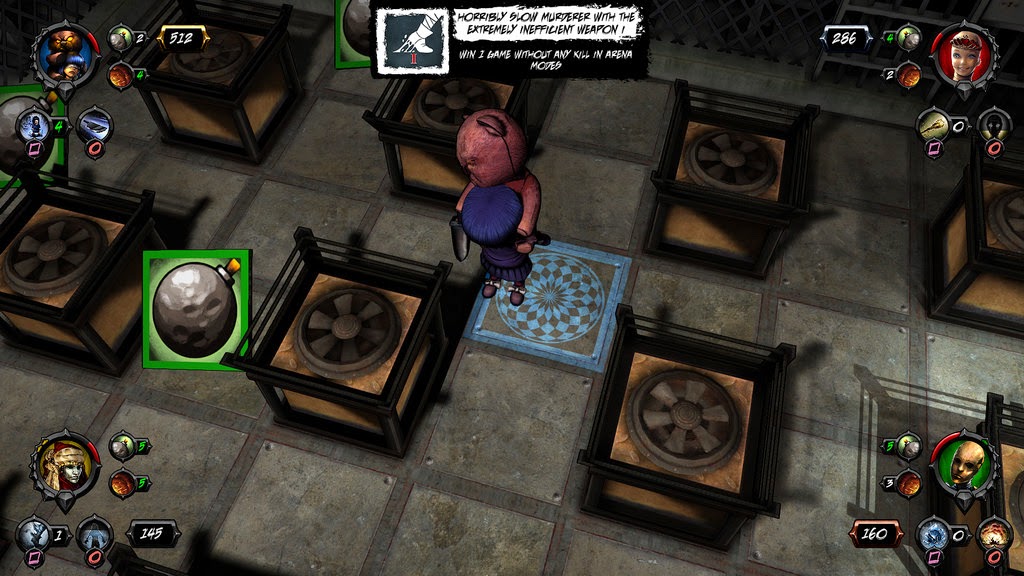 Multiplayer compared to the Single Player is truly where the gloves come off. There are both local and online options that players can choose to face off against others in a match of wits and cunning. On the whole, multiplayer was well thought out as it gives players more than one or two different modes to face off against in. Having five separate modes allows for much longer versus bouts before anyone starts to get that “do I have to do one more” dance that people can sometimes do at the end of the night instead moving closer to a “hey why not one more of “that” one?”

Available modes consist of Versus, Classic, Duel, Color Domination, and Sumo mode. Each one has their own rules and feels different from the others allowing for quite a versatile match up. Versus uses the standard rules and allows for players to use each character’s unique abilities as they see fit in order to win the match while Color Domination instead has players put the most amount of their color on the floor in order to win. The difference in each mode made it more than just variants on blowing up bombs beside your opponents to win. In Sumo mode for example, players must use their bombs as forms of pushing other players off the map and into various holes for points. Be warned though, falling into a hole yourself will reduce your own score whether you fell through a trapdoor or blew yourself off the side of the map. We will just chalk it up to the fact that it was not my best game mode.

There actually is a third mode that I would not have found under normal circumstances; after enjoying both the Multiplayer and then the Single Player in which will help me exact my revenge upon the others next time, there was another set but under the title of Challenges. There are two forms for a player to take one both either by themselves, or in a more co-op fashion.


The first of these modes puts the players in a survive-the-waves situation, though there is a twist. For every wave completed, the lights got dimmer and dimmer reducing the visibility making it that much more intense as there were always more enemies that spawned per wave. The second of these modes puts the players into a situation in which they must save sheep in order to cultivate them themselves. As time goes by, more sheep will spawn up but so will more enemies come in for the kill. There exists a decoy by placing a black sheep that is really a bomb in disguise which can fool and destroy several wannabe sheep killers while your character runs for the switch to claim those sheep’s lives as your own. Both of these are entertaining and work as a good break from the other modes.

The only real issue that Brawl can have is one of the things that actually makes it what it is. The darker colors that are used for the style can sometimes make finding yourself on the map a little hard since the characters blend in with the environment. With how fast paced the gameplay is and sometimes teleporting between different spots with explosions roaring all around, it could be hard at times to figure out where you were when looking around to figure out your next step.

Having a good and challenging Single Player mode alongside the much more intense Multiplayer modes was good to see as this can sometimes be the weakest element as they are most often thrown in as nothing more than an after-thought. The level of detail, the narration, and the gameplay that switches it up made it worth playing all on its own once everyone else left for the night.

Brawl, regardless of how macabre it can seem with its art styles or creepy with itfs music, is a good multiplayer that fills in a gap that hasn’t quite been filled since the last release of a Multiplayer Bomberman almost six years ago.