I love board games. I love video games. I love when the two hobbies can come together successfully. Generally that means that a traditional board game is developed for the PC or a console. However, Golem Arcana flips that script around by building a strategic board game with some video game sensibilities that help with community structure and streamlining of the gameplay. The end result? Something that feels genuinely unique. 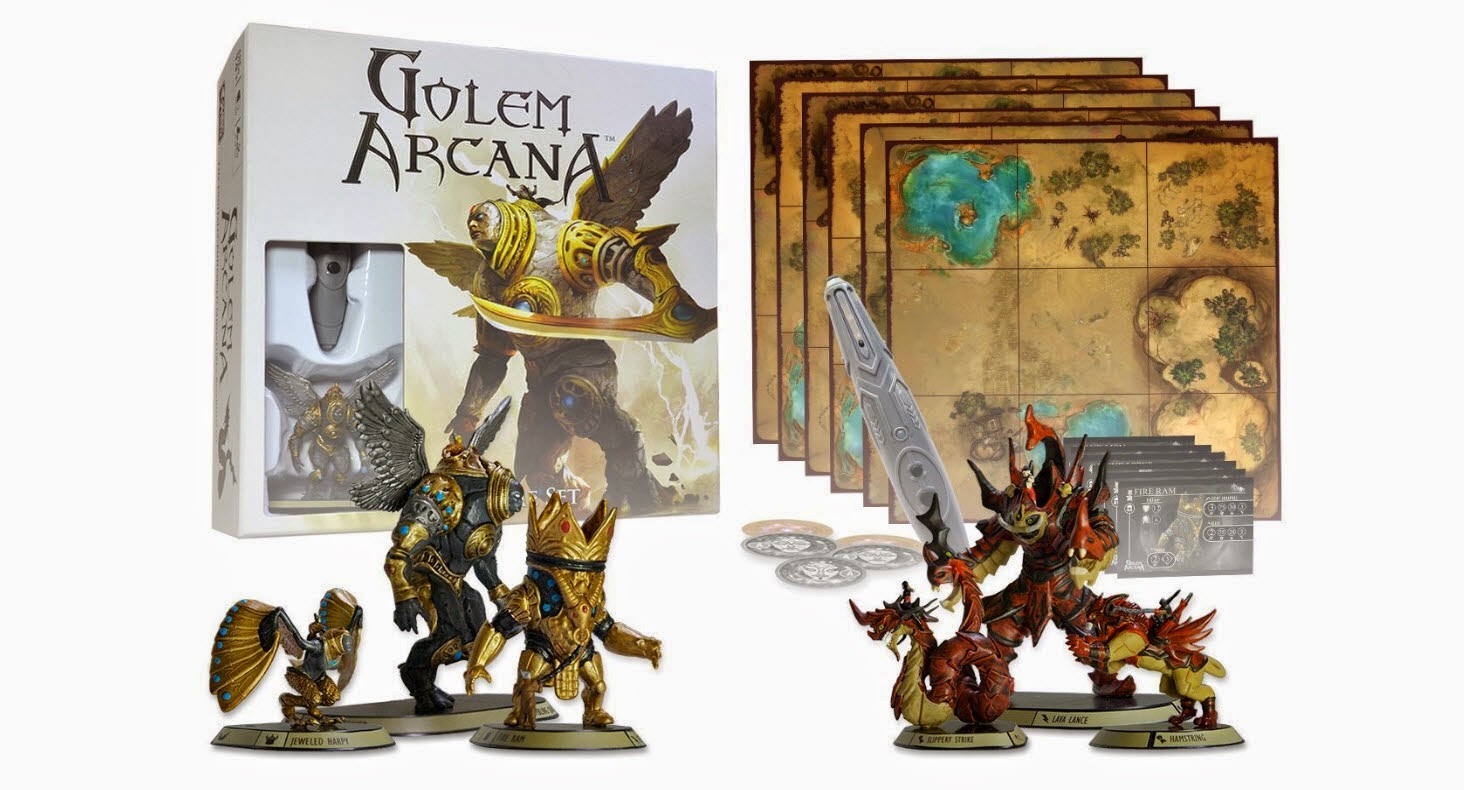 It is worth pointing out immediately that this game requires the use of an app. While that might not sound like a big deal in and of itself, you will want to check the system requirements because you need a fairly recent version of Android or a gen 3 iPad or iPhone 4S or newer to run it. I tried it on a couple of different devices, but the iPad 3 was my favorite since I was able to just prop it up on the table while playing and we could go back and forth with it easily.

At a glance, Golem Arcana reminds of popular strategy games leveraging miniatures such as Warhammer, but frankly Golem Arcana is a good deal easier to pick up and play. The app itself really is the key, and it does a solid job of walking players through the basics. At first the tutorials are more about talking than doing, but the application has a fully voiced introduction with some nice background music that helps to set the stage.

However, what is perhaps most clever about the game is the technology tying the miniatures to the app. There is a stylus that comes with the boxed set that is the key to everything. One end of the stylus has a soft pad that you can use for poking and dragging around the iPad, while the other has a camera that is used for interacting with the game pieces. The game pieces themselves include six golems (two different factions, so teams of three), six tile boards that each represent a three square by three square grid (and they are printed on both sides so you can flip them over). some dice, some cards for your golems and team management and a printed book.

The materials are all very nice, with the miniatures suitably interesting looking and per-assembled as the fantasy creatures are pegged into a stand. The banners are a bit less smooth to put together, as they are simple plastic stands that you wrap stickers around. I am not the most dexterous when it comes to this kind of thing, so I will admit that a few of my sticker flags look a bit janky, but they do the job. The boards are thick and solidly constructed. The stylus is plastic, but it holds up well, with little details like a couple of buttons on the side that can be used to confirm and cancel commands, a rubber cap for the camera end and overall a wide, comfortable design that seems to pick up on details very nice once you have it paired via Bluetooth with your device. 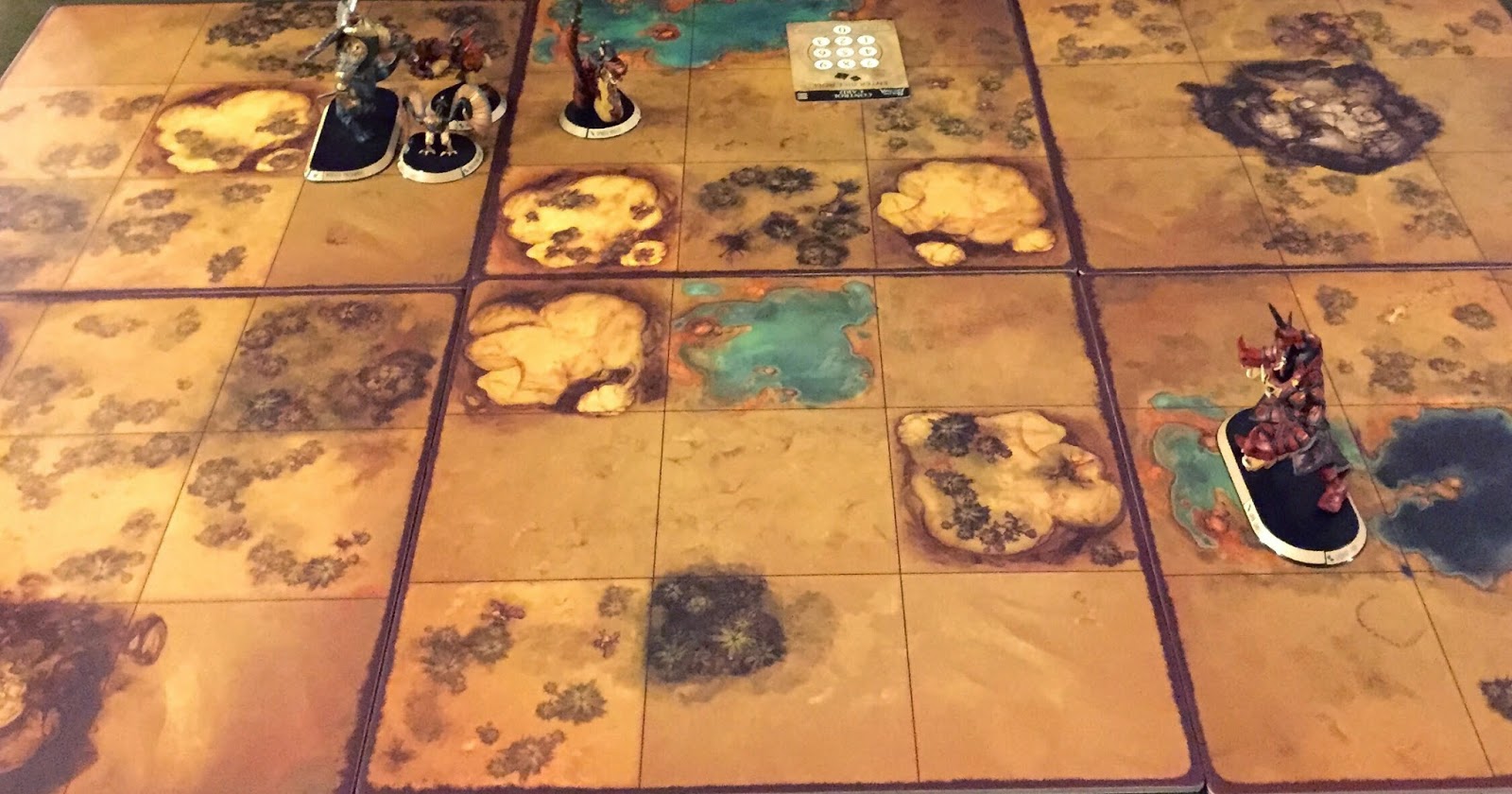 The tutorials are where Chris and I started, and it did a good job of teaching us the basics such as moving and attacking. The second tutorial got into more detailed information, such as environmental effects and the use of magic. There are some different modes such as King of the Hill, destroying all or specific units and more.

Chris was thoroughly amused by the ‘magic in a box’ – basically how well the stylus picked up on things. Want to move a unit? Tap either the walking command on the unit’s card or the walking icon on the base of the unit. The app will then show where on the grid the unit can move. Some units fly, some walk, and the terrain can have an impact on these as well as line of sight for ranged attacks. Want to attack someone? Pick which skill you plan to use and then target your opponent. The game does provide a couple of ten sided dice that can be used for rolling percentiles if you want, because attacks can hit and miss as well as be critical, but it is far easier to use the application.

Some board games that deal with lots of calculations and effects can become a bit of a chore. I loved Sentinels of the Multiverse, but I was regularly doing a fair amount of math – never my favorite subject back in school. Here the application does all of the dirty work for you, calculating hits and misses, letting you know if a move is valid and how much damage was dealt and if the targeted golem was slain.

Another nice touch is that the data from the games is then sent to the development team. This allows them to see how the game is being played, offers some online play options and also helps to direct the fate of the story. These are all excellent options that give Golem Arcana a sense of community not found in a typical board game and is quite frankly just excellent use of the technology. 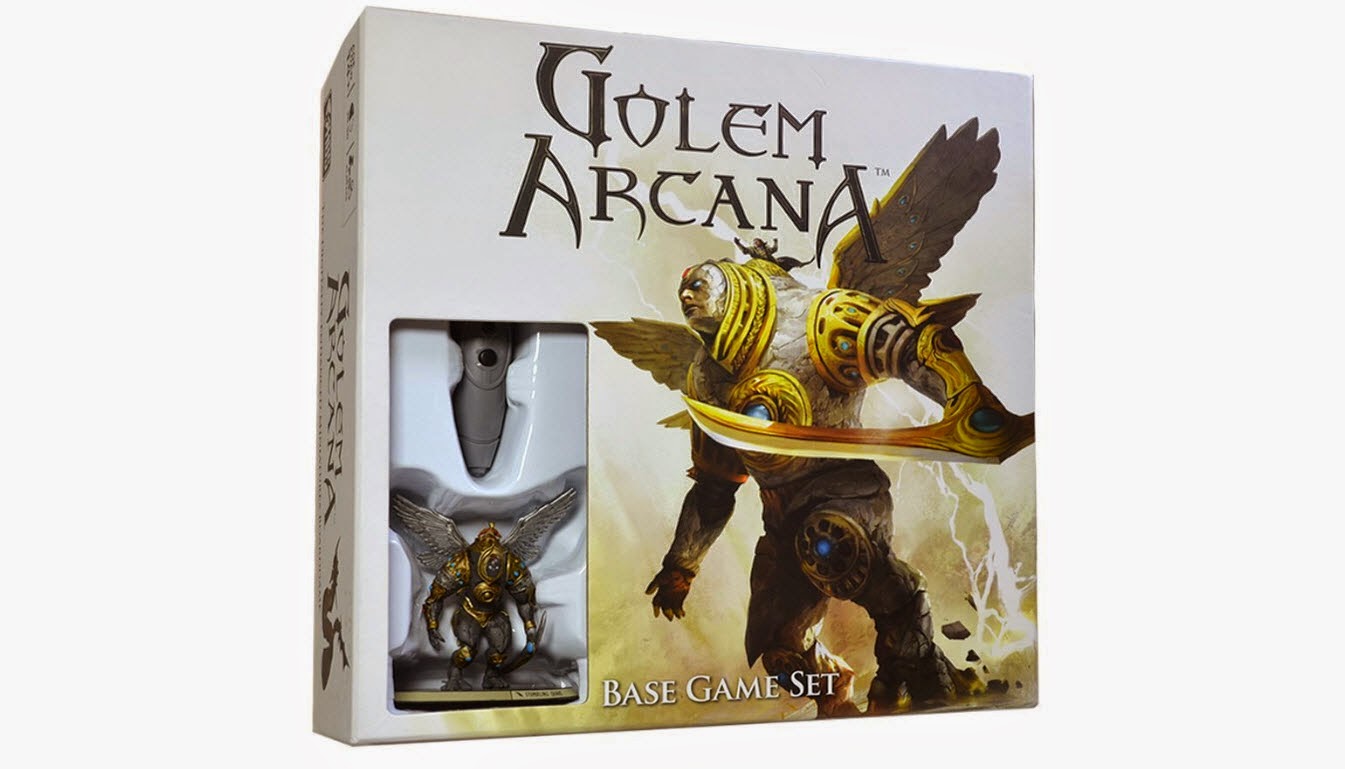 There are a few flaws with the overall package that are worth noting, however. One, as mentioned earlier, you have to have a fairly newish device to interact with the game. I also wish the flags had just been per-assembled like the golems were. Depending on the speed of your device, some of the content loads a little slowly, pausing your gameplay as the device plays catchup. I noticed this a lot more on my iPhone 4 than on the iPad 3, but it happened on both devices at least occasionally (usually when trying to bring up golem-specific data). Also I ran into a couple of bugs. The app did crash a couple of times (I suspect the iPad’s system memory was getting low both times, but it was not a graceful way to end the game).

Additionally in one of the King of the Hill battles, I beat Chris on a daring final move and… the app froze. It would not let me kill him. I could cancel out my last action and try again, it would roll again, I would hit again and… nothing. It just locked up, like it did not want the King of the Hill mode to end in that fashion (as I was wiping out his last golem and not actually winning on points).

Last but not least, this is a game with lots of expansions. The base game set is not cheap, with a list price of $79.99 and the expansions generally ring in at around $35, though some are more. What you get with the base game set is solid and provides plenty of scenarios once you set up your armies, but Golem Arcana’s business model is clearly structured around expansions and might feel a little micro-transaction-y to some. It is hardly a new model – lots of strategy games do this, but it is something to be aware of if you are looking to invest in the game.

The beauty of the system is twofold. It is easy to learn and streamlines gameplay to make Golem Arcana pleasantly accessible. It also opens the door to a greater sense of community, something most board games cannot provide due to their physical nature. The marriage of board game and technology is not flawless – there are some growing pains here and there, but the overall result is impressive nonetheless as the Golem Arcana Base Game Set promises hours of entertaining strategic gameplay.