It was just another mob job. It’s 1920. It’s prohibition. What could honestly go wrong with people being denied alcohol on Saint Paddy’s Day? 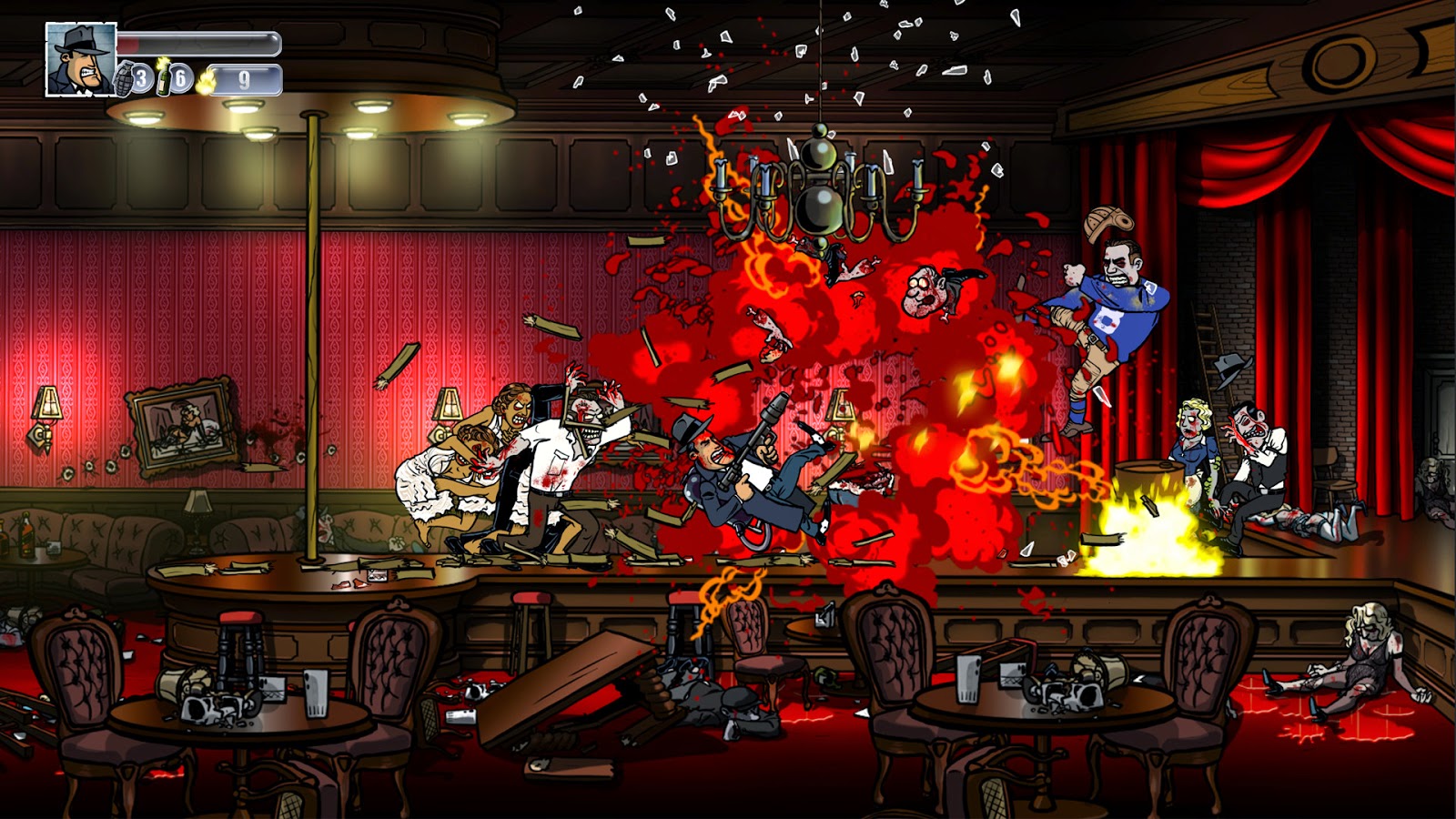 Taking up the shoes of Vinnie Cannoli, you cross the river just to find yourself right in the middle of this mess. Zombies or not, professional pride dictates that you’ve got a job to do and you’ll be damned if you don’t pull it off.

Using a comic book style for graphics, Guns, Gore & Cannoli is a 2D Shooting Platformer that does everything right. Starting off from the boat itself to the various city districts that you cross through, the level designs steadily get more challenging in their layouts. There are doors to break, watch towers to throw grenades in, crane lifts to jump up on, and ledges to kick your enemies off of. I say enemies as in a lot of cases Zombies are the least of your worries. Even if they have guns, the various mobs and the military know how to actually use theirs.

Setting off from the boat using a controller to move and jump around everything felt smooth. The jump distances felt dead on meaning that those few times I missed were completely my fault for having jumped too early, or I was blown out the way by either a rocket to the face or a grenade blast from jumping away too late. Using a great amount of artwork for both the foreground and background, there were a few times in which leaps of fate were required but there was never any outright misdirections sending you back to a checkpoint. It was refreshing to play a platformer where the platforming was never overkill and the true test of skill didn’t come from landing insane jumps, but more from kicking and shooting your enemies before they got to you. 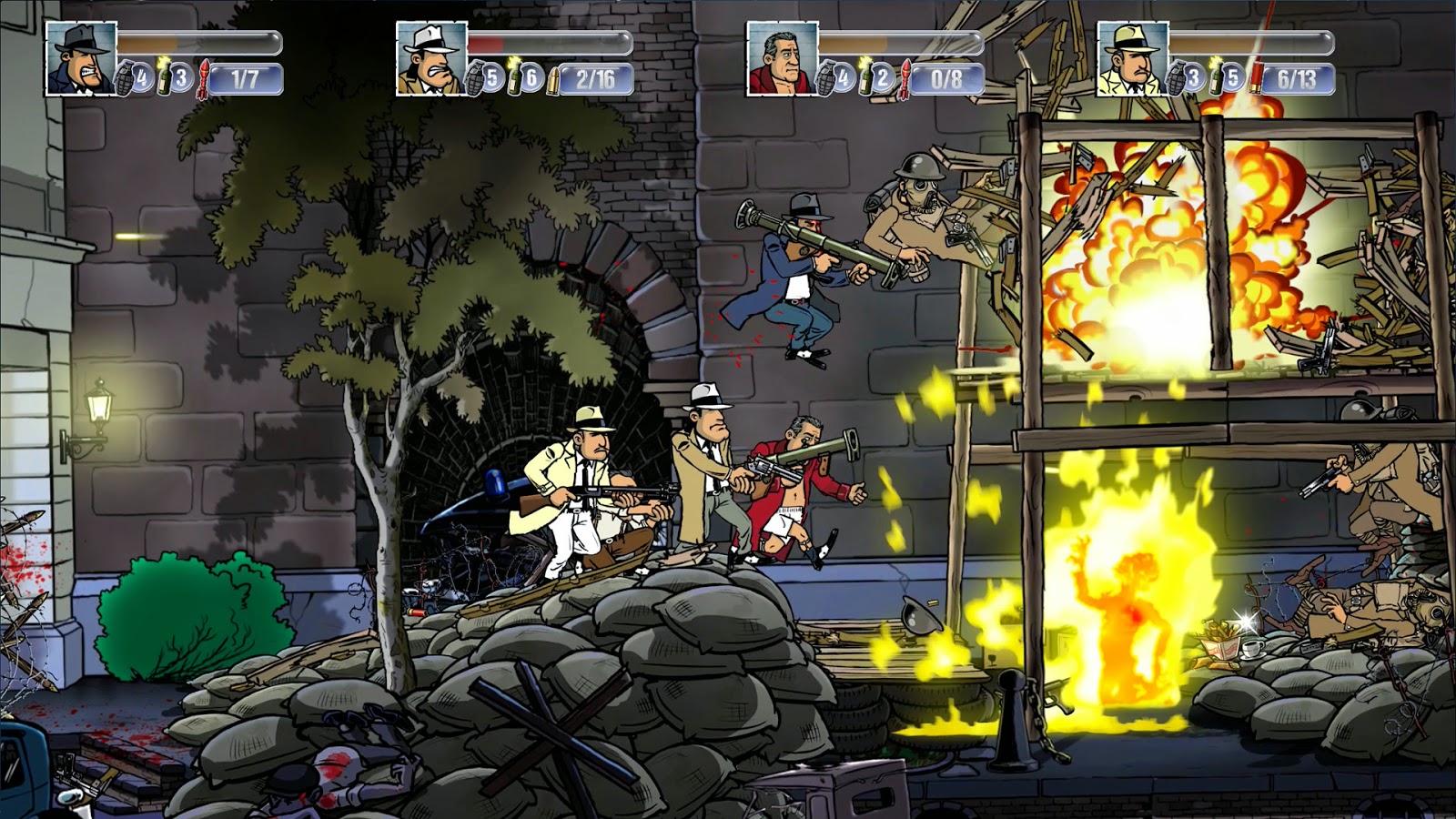 Now while running and jumping is useful and in a lot of cases necessary, it won’t be keeping you alive. Vinnie is a resourceful man and thankfully due to the miracles of infinite ammo he is set on his trudge through the Zombie infected districts. Now while a single pistol is useful, heavier set weapons such as Tommy Guns, Double Barreled Shotguns / Pump Action Shotguns, Flamethrowers, and laser guns are so much better. These are only a portion of what can be found and as much fun as it would be to have infinite ammo for these, the laws of ammo do apply. Ammo for these powerful weapons can usually be found lying around or in certain cases are hidden off to the side and require breaking down a door or jumping on a roof to backtrack slightly. Whether limited or unlimitedly gifted, each weapon has a certain amount of shots that can fired before being reloaded. This should be kept in mind before unloading an entire clip only to be caught without bullets. If this happens though, Vinnie once again shows his resourcefulness by either a swift kick knocking anyone back while he continues to reload or jump out of reach to give him the time he needs to finish.

Vinnie is an incredibly good shot, then again considering his day job he kind of has to be since he doesn’t use a baseball bat. Standing straight and tall his shots are aimed directly at the head. As we all know it, Zombie or not, a headshot is the quickest way to remove an enemy from your path. Crouching down yields the same straight and true bullet trajectories which helps when working on elevated or lowered grounds. However good of a shot Vinnie is, running and shooting in an actual straight line is tantamount to impossible. While on the run and letting bullets fly, after a while it became noticeable that these bullets were slightly higher or lower than they would be otherwise while standing still. This could cause some enemies to take longer to fall or in certain cases quite the opposite. Helmet wearers could have bullets just bounce off more often than not. Running towards them however would hit just under that lip making the whole process easier. If more bullets flew high though, well then there was always plan B. Kick them and then shoot as they are throw backwards and are left temporarily unguarded. There are multiple options to any situations and Vinnie was not afraid to use them. 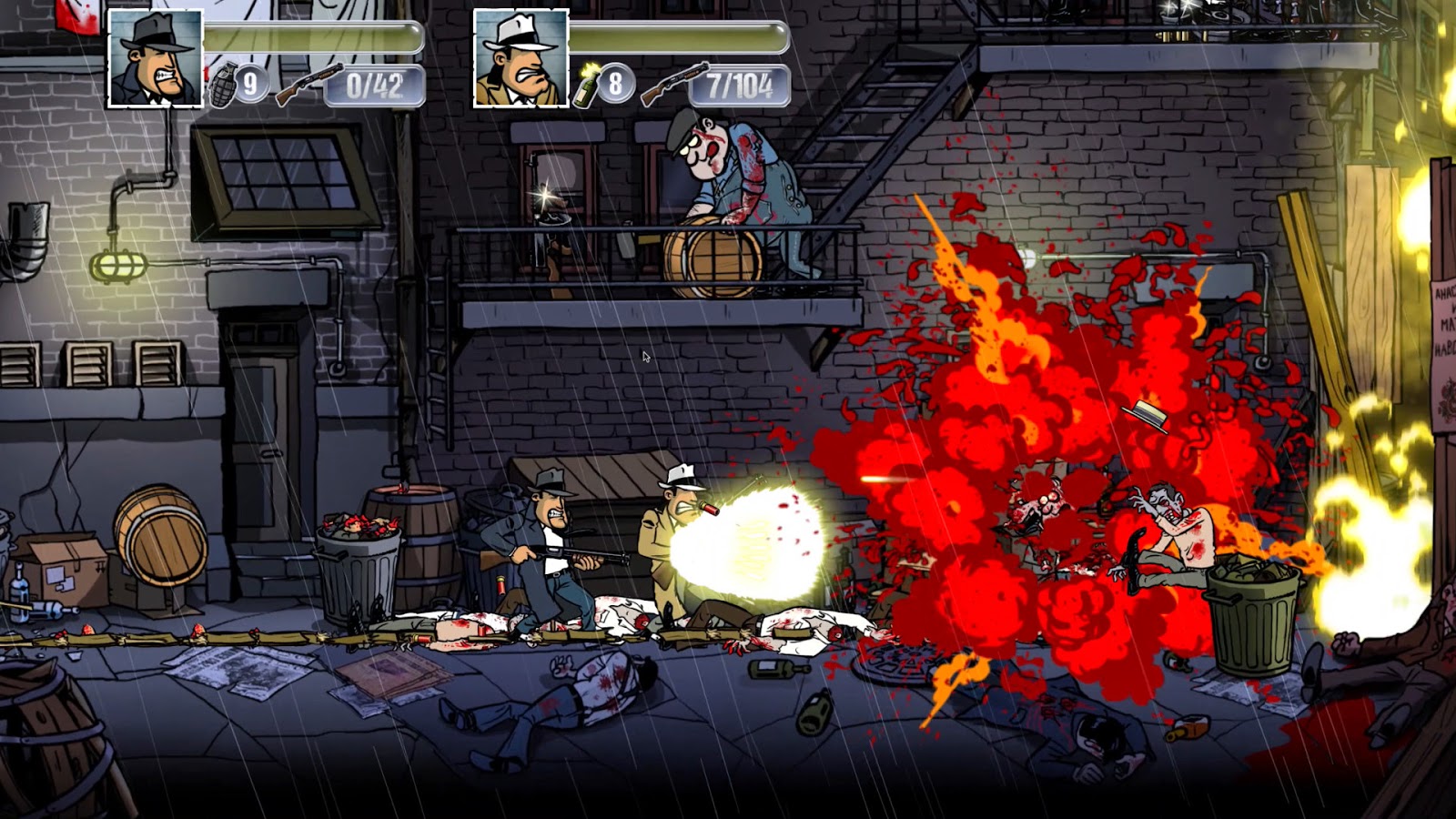 Guns, Core & Cannoli comes in various difficulties which is great for the re-playability. Playing on normal can clock in around three to four hours depending on skill or how many times Vinnie was caught off guard and made into Zombie chow. Don’t worry though, if you do become Zombie chow there are checkpoints strategically placed to prevent obscene backtracking alongside take out containers of Cannoli to restore you back to full health. Changing up the environments between boss fights with the addition of new enemies and weapons keeps gameplay feeling fresh instead of drawn out. The challenge curve is very well rounded and there is never that overt difficulty spike that will either make you or break you.

From the cargo ship through to the docks and then the city proper, Guns, Gore & Cannoli is a platformer to be contended with. The responsive platforming and well designed shooting mechanics with the variety of available weapons was both fun and entertaining from start to finish.