I am a huuuuge tactical RPG fan, so I have been following Lost Dimension for a while now. Well, a trailer plus a host of news came from Atlus today. Let’s take a look. 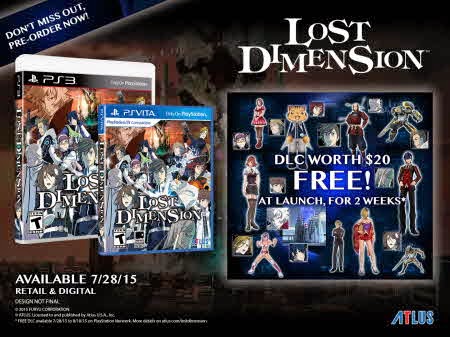 Lost Dimension, the sci-fi Tactical RPG from ATLUS and Lancarse will launch July 28, and for two weeks after launch, players can download more than 20 dollars’ worth of DLC for free! What’s all this free content? Well, once the game launches, players will be able to get 9 free in-game character costumes (see the image of Marco’s Kitty Costume down below), 12 free PSN avatars, a map set with additional story, and 3 DLC quest sets for extra experience.

The character costumes are varied new ways to tactically kick ass in Lost Dimension, ranging from Toya’s dapper suit to Mana’s superheroine outfit, and everything in between! The costumes are cosmetic only and provide a lighthearted change to the battlefield (until of course it comes time to erase Kitty Marco from existence).

The free PSN avatars represent the 11 heroes and heroines in the game, as well as a special avatar for the game’s villain: The End. They have no bearing in-game, but now you can represent your favorite squad mate or extraterrestrial hellbent on destroying the world across all of PlayStation Network!

The three quest DLC add an extra mission to each floor. The missions don’t provide much in the way of EXP or EN (Energy, a.k.a. money), but if successfully completed with an S-Rank rating, players will be rewarded with a specialized item for individual character bonuses. Getting an S-Rank requires completing the mission as quickly as possible — at any cost. The mission packs come in differing levels of challenge:
•The Emissary from the Netherworld: Moderately difficult
•The Price of Blood: More difficult
•Runaway Cause and Effect: Most difficult

Finally, there’s an additional map pack called The Beginning of The End. This is a separate story that takes place in an entirely different location; there are five missions in total, but it explores the creation of the game’s central Pillar and goes into the history of the 11 heroes and heroines in Lost Dimension.

All of the above DLC will be completely free for the two weeks following the game’s launch this summer.

There are also some additional paid items players can purchase as well. Ranging from 49 cents to 99 cents are a wide array of helper items. These are consumable items that help raise experience, money and other beneficial stats by providing a passive boost before a battle. The helper items typically aid in combat scenarios.

Second are paid status boosters. These items range in price from 49 cents to $2.99, and can increase vision points or help restore SAN (sanity) stats in combat, which affects a character’s abilities to use skills, even providing a consumable item that levels up all your party members. These items typically help players out for Judgement scenarios, where they have to suss out the traitors amongst their party.

Being a sci-fi Tactical RPG, it would make sense that tactics play an important role in Lost Dimension, which of course is a perfectly logical conclusion. But when your party is filled with not just one, but FIVE traitors, it adds a whole different level for thinking tactically. Because after the end of each floor of The Pillar (the massive alien structure that fell from the heavens and will be the center of destruction of the human race if S.E.A.L.E.D. doesn’t stop the alien The End in time), a voted-on traitor will be erased from existence.

Which is a total bummer if you’ve been investing the time to get them plenty of experience and spending money on their gear. But it’s not like traitors are chosen at random or anythi…oh, wait they are. Every playthrough.

So here are the first of the three members of S.E.A.L.E.D. showing off their psychic powers, and good news only two of them are possible traitors because Sho is the main character. However, you should definitely consider everyone else a possible traitor, so don’t uh…don’t get too attached.