RPG Maker 2003 is a much older version of the software that has only just recently been translated and localized. In the years since many have seen and used the later versions of XP, VX, and VX Ace. I have personally spent hours upon hours trying to make even the tiniest of games and there is always this wall that comes up blocking further progress. This was generally due to either a lack of more ideas or complete hard drive crashes and the loss of data. 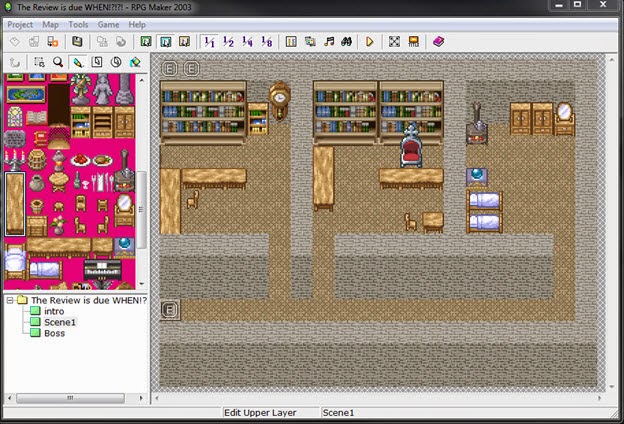 Though with the availability of massive, cost-effective hard drives, the latter has not been much of a problem these last few years. So when someone honestly says “oh you just made that using RPG Maker” they generally have no real idea of how much time and effort still needs to go into making such a project. The time building the environments, the time scripting events and cutscenes, and the time getting combat “just right” to not have it too easy, too hard, or just plain boring. All of this is even before getting into the more custom sprite making, music and battle systems.

Before getting into details, the most important factor is to understand the manner in which RPG Maker 2003 is designed. Any game, RPG, Action RPG, Action, Platformer, you name it, has three distinct layers. Each of these layers have their own specific use and must be designed accordingly if the final project is to succeed.

The first layer works like the ground as it defines where the eventual player can or cannot move. Straight paths, winding corridors, walls or no walls to define these paths that is your choice to make. The layer above this one is where a user can throw in obstacles and decorations such as beds, chairs, barrels, statues and other fun stuff to make players move around. The final layer is perhaps the most or least important depending upon how you see it. This is where users can enter script for events, cutscenes, transitions, change random battles for on screen enemy battles that you run into and so on. 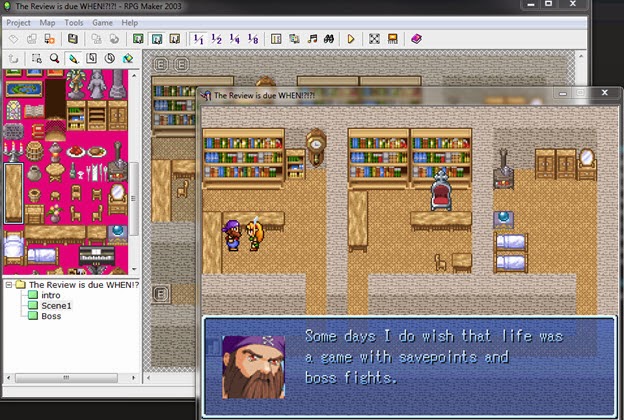 The interface in RPG Maker 2003 is simple and clean which is a staple of the RPG Maker series. Just about any required tool or option can be found either on the left side of the window with the available tileset or all along the upper taskbar leaving the majority of the window for the user to design their adventure. The tilesets take up about a quarter of the left side of the screen along with the project’s name and area maps which are all easily accessible with a simple click of the mouse. The maps can be easily dragged-and-dropped as needed or even put under another one which indents it in the list to show the user, or another collaborator, that those maps are part of the one above it.

Moving on to much more fun things than the interface, comes the actual construction of the game. I will be honest and say that anyone that has ever used MS Paint or Adobe’s Photoshop will find themselves right at home with the following options.
–    The Pen tool to draw tiles one click at a time;
–    The Rectangle tool form a rectangle of the selected choices;
–    The Oval tool which is like the rectangle but more circular; and finally
–    The Fill tool that will fill up any space that is attached to it. 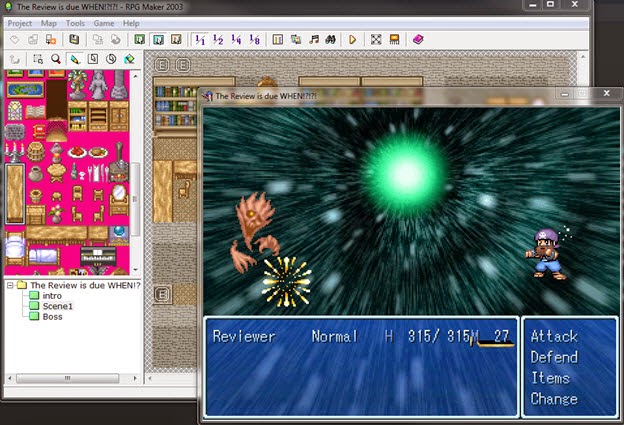 While the above might not sound like a lot of available options, they get the job done rather quickly and efficiently. Some of you, by this point may have realized that I never said that there was an eraser to remove anything that was unwanted and this because instead of being part of the selection tools is instead part of the tilesets. Unfortunately this means that the Eraser can change places depending upon which level of the tilesets you are looking at. It would have been nice to have a dedicated Eraser tool, but at the very least there still is an option for it.

After you initially build your first environment(s), which will be an ongoing process because it is never really finished as there is always going to be that “one last thing” that you will want to add or modify, comes the placing of events. Because I could literally be here until next week writing about what events can do, I will try to keep it brief (but feel free to comment below for more information!). 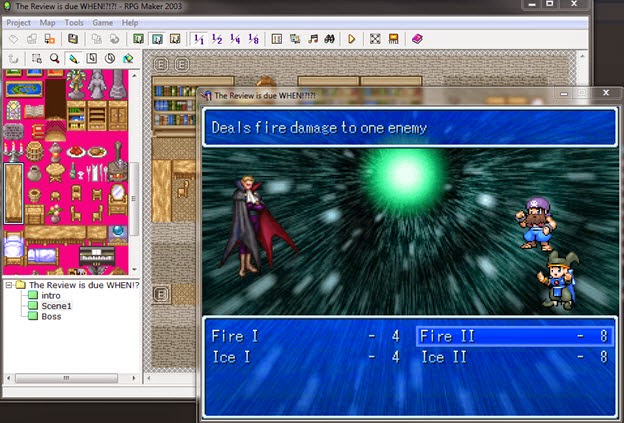 Events are multifaceted and exist to make everything work from more than just moving around the map. These control possibilities and absolutes, from allowing a player to move into a house, from the village into a field or a cave, fight an encounter as long as they have talked to Town Persons A-B-C and walked around the well three times counter-clockwise, to no longer being able to enter a shop because you irritated the owner. All of these options, and more, can be set within one event square with commands that can be input into a window from a series of available choices.

To say that there are a lot of options would be an understatement; unlike the VX Ace version that I recently used, the RPG Maker 2003 does not have sections that break up the options under headers to make them easy to find. This could create a bit of a challenge when trying to remember which option was on which tab and how far down the page it was. While this is not the end of the world, it could certainly make the things much more time-consuming. There are a few items that could have been updated for the re-release such as the ability to set the Face Graphic while inputting the text instead of having them both as separate actions which can really fill out the Contents window very fast. 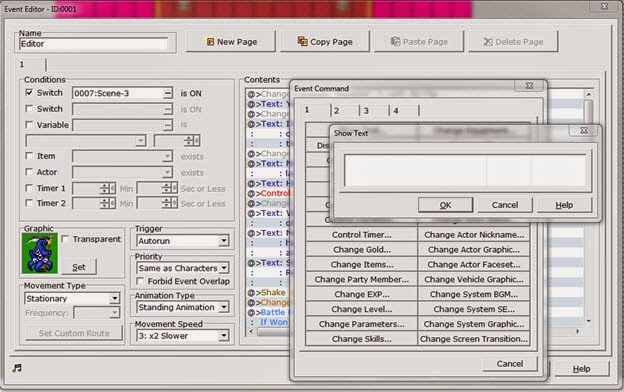 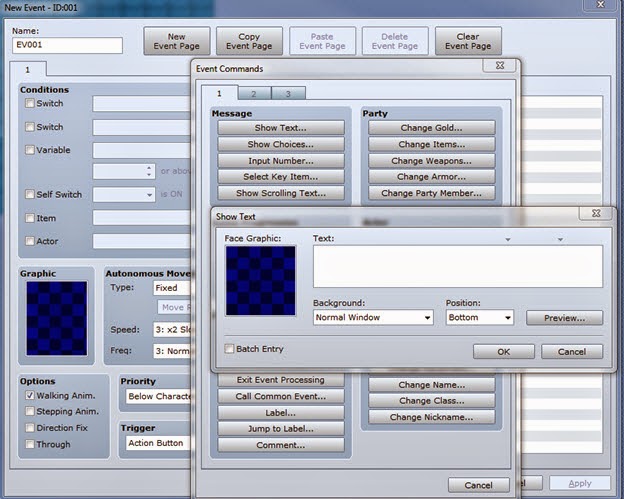 These really are only minor details, but they are minor details that do add up over time but in regards to how much time has been spent and sometimes into how frustrated you can become before really needing to take a break from the project.

The final gear that makes everything work is the database. This acts as the central storage unit for every ounce of data from your characters and enemies to animations and tilesets. In here just about any modification can be done. A perfect example would be for anyone who’s playing Final Fantasy IV when Cecil goes from being a Dark Knight to a Paladin. This would have been two separate entries in the database with an event handler that would switch over his sprite, his experience and level, his base stats, and his equipment the moment he defeats his darker self.

RPG Maker 2003 is a great software that is rather easy to use but has a learning curve to figure out exactly what everything does. For anyone wanting to make it into the indie scene and even have something published on Valve’s Steam, the RPG Maker is a good place to start even if you do not have a coding background. If you are curious how easy? You can take a look at my game project right here.