You can’t get more ‘old school’ than the strangely named Vulgus. This is Capcom’s first arcade game, released in 1984, and can be found in ‘Capcom classics collection-vol. 1’.

Vulgus is a simple, vertical scrolling shooter. You control a small aircraft and face dozens of enemies which shoot bullets or just crash on you. The latter happens often because opponents tend to appear from the sides of the screen and then swarm in on you. Your weapon shoots only directly ahead and its rapid fire mode isn’t fast enough. There are no upgrades or smart bombs either. So, Vulgus is very hard from the beginning. Take into account the absence of continues and you end up with a game that punishes you repeatedly.

On the other hand, I liked the minimal, stylish design of sprites and how they follow different movement patterns. The graphics are lacking but the frozen wasteland looks good. Shooting down groups of enemies for more points –and extra lives- or using missiles to destroy larger ufos add variety to the action.

The adrenaline was always high, especially when I dashed daringly to the top of the screen to dodge opponents. There are no distinct stages and I have managed to meet only one boss –a big construct surrounded by rotating rocks-, however, I never saw the same thing twice. The music was horrible though and I turned it off.

Being Capcom’s first effort, Vulgus is certainly decent. It also let me test my arcade skills. The assessment result was not encouraging but helped me appreciate modern games, with saves and power ups! 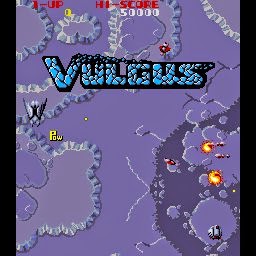