The concept behind Boss Monster is actually a relatively simple one that plays out rather quickly once you get the hang of it. You assume the role of a Boss Monster and you are trying to lure heroes into a dungeon that you progressively build up over time. Those heroes will attempt to kill you, and you will try to return the favor in kind. It is a fun premise that works well and is surprisingly quick and easy to learn. 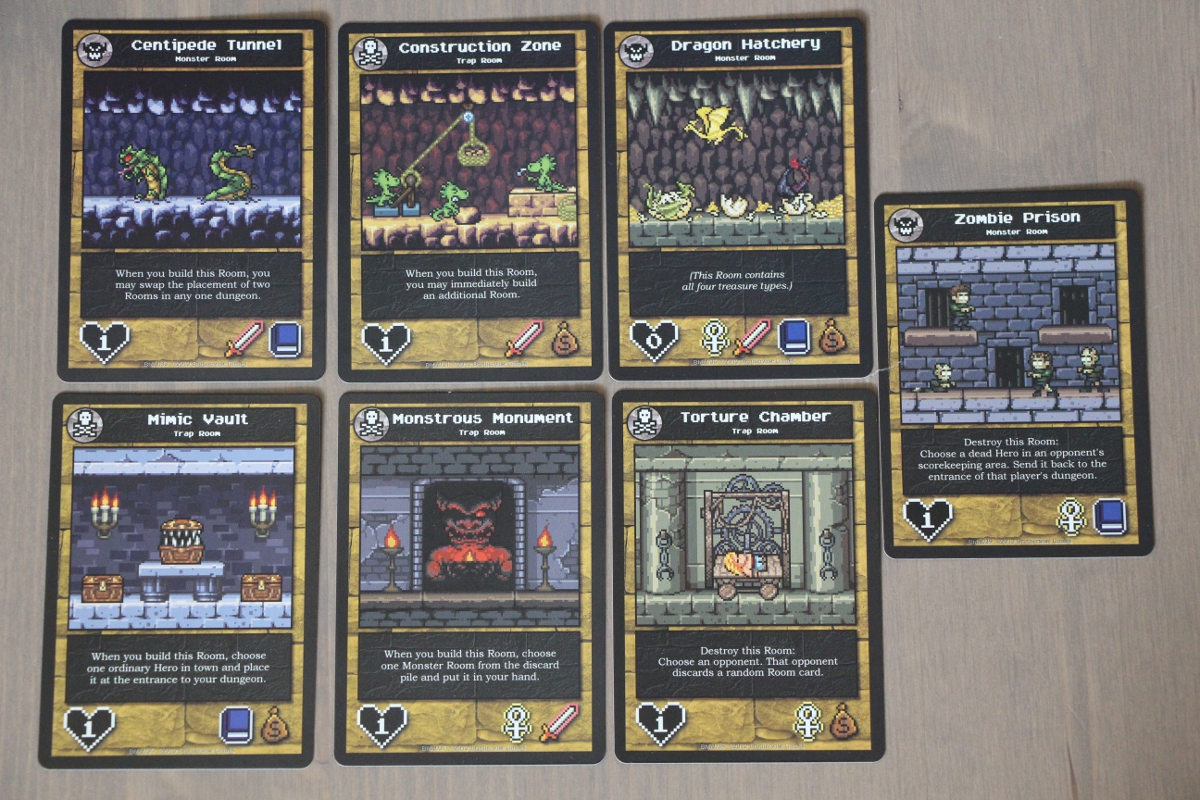 Boss Monster plays out similar to other capture card games (such as Tentacle Bento, but with a far different aesthetic) in that this is strictly a game of cards that tries to leverage some strategy against some luck. There are two paths to victory. You can earn ten gems (from killing adventurers), allowing you to win the game, or your opponents can suffer five wounds (effectively killing them and allowing you to win by default as the last monster standing).

Perhaps a better comparison for this title, at least in theme, would be video games such as Dungeons or Dungeon Master. Here is how the game itself plays out. Each player randomly draws a boss card. Each boss card has an experience value and a level-up skill. The boss with the highest experience level goes first each round. There are are four decks placed near the center of your playing area: spells, rooms, heroes and epic heroes.

When you start the game you draw a handful of room and spell cards. The idea is that you are going to use room cards, one per turn, to build your dungeon. Each room card falls into two basic categories – monster or trap. The trap cards tend to be of the more inanimate variety, such as a boulder to crush the hero. Monster meanwhile might have a brain sucker creature that looks like it escaped from a Metroid game. The distinction is relatively minor, but there are cards and abilities that call out monster or trap cards specifically, so that is where the nuance becomes important. 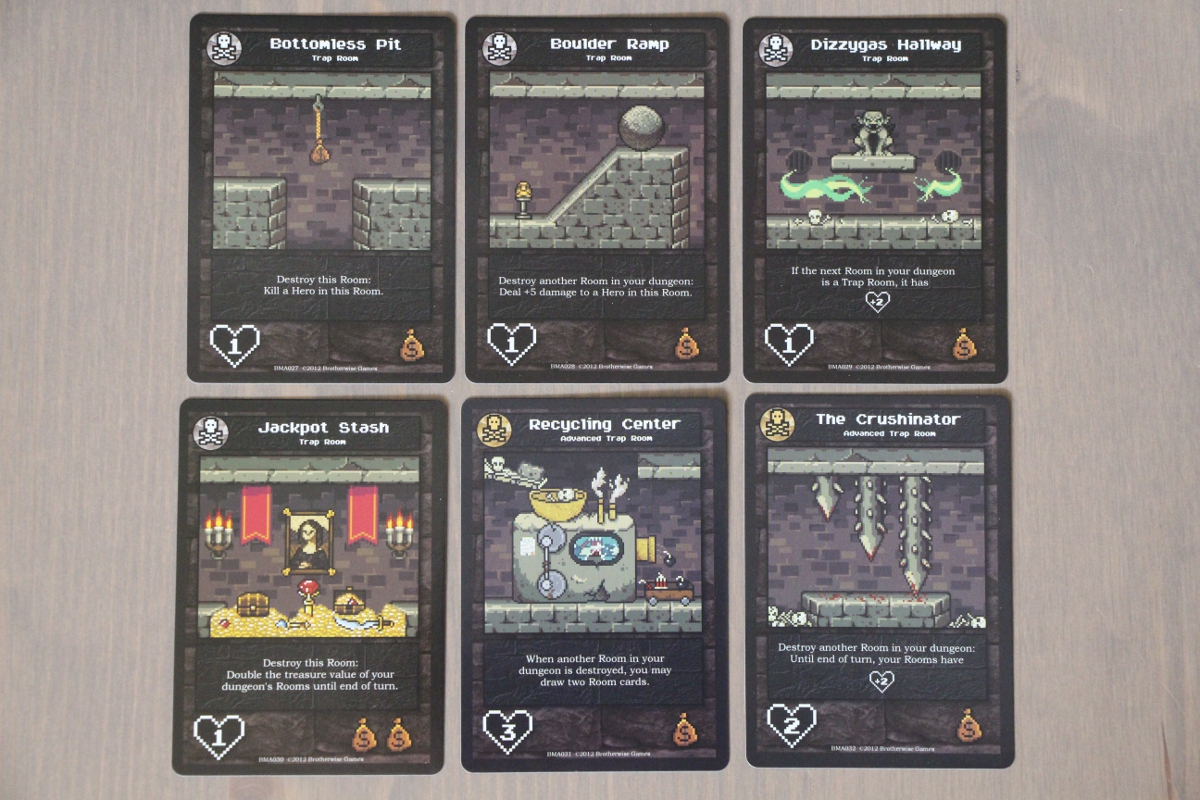 Each card also has a couple of other symbols on it. In the lower left corner, you can see how damaging the card is. In the lower right, you can see what kind of treasure resides in said room. The treasure is what lures the hero to your dungeon. Each turn you flip over two hero cards in the middle of the table. Say you flip over a fighter with six hit points. Each player at the table then looks at their dungeons and counts up the number of sword symbols they have. The player with the highest sword value is the one whose dungeon the fighter will venture into. If there is a tie for first, the fighter will wait ‘in town’ – meaning he will not venture into any dungeon this turn.

The fighter then moves to the player’s dungeon who has the most sword icons. He approaches the first room and takes the damage indicated in the lower left corner of the card. If he survives, he moves onto the next room. If at any point while traversing the dungeon the hero dies, the Boss Monster who owns that dungeon can flip the hero card over and gets coin(s) for him. As mentioned above, the first player to ten wins. So in theory, you want to bring heroes into your dungeon since that is how you go about winning.

However, should your rooms be incapable of killing the hero, and he or she makes it all of the way through, they deal damage to your boss monster. If your boss monster takes five wounds or more, you lose the game. Since this is a competitive game, your opponents may try to spice things up. They have spell cards that might allow them to redirect an easy hero to their dungeon, or perhaps boost a hero’s life value as it works through your dungeon, or negate one of your rooms – things like that. The spell cards basically allow you to impact the game outside of the standard rules and serve as the primary wildcard throughout. For example, I lost my second game by a hair when I had 9 coins and a hero strolling through my dungeon. I used one of the room card’s special abilities (I had a trap card that allowed me to boost my trap damage by 5 points if I was willing to destroy another room in my dungeon). This allowed me to just barely kill the hero by dealing one more point of damage than he had for life. Or… so I thought, until Chris beefed the hero up by three more points with a spell card. The hero survived – I didn’t, since I already had four wounds at the time. 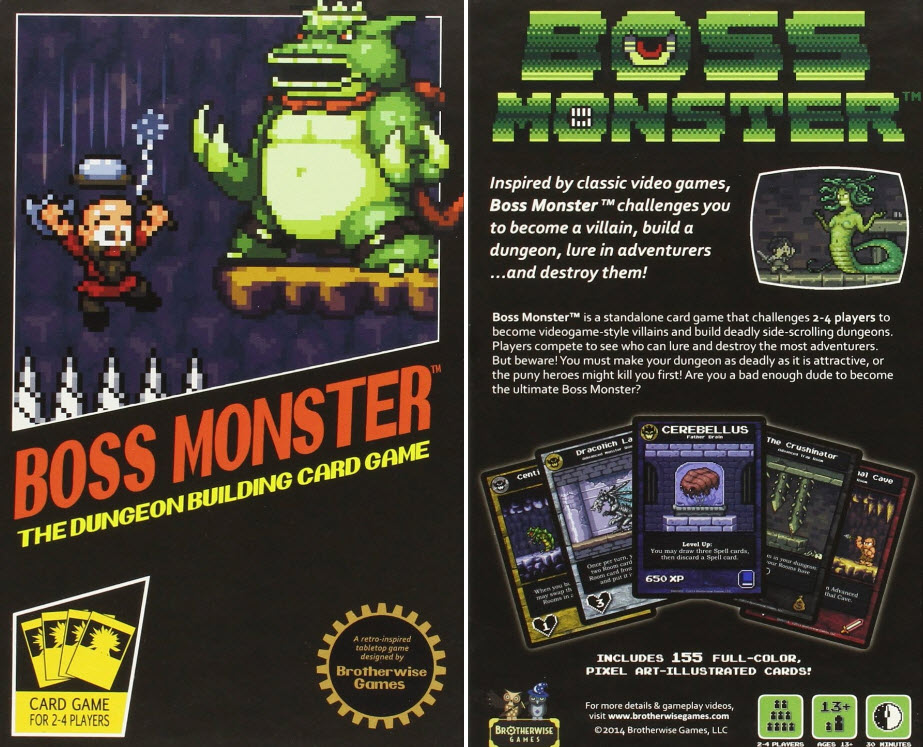 Construction of your dungeon is equal parts luck and strategy. Of course whatever cards you draw will dictate what you can do, but you need to weigh the merits of how you will build. Some cards will give +1 bonuses to adjacent monster room card damage, for example. Since you build your dungeon in order, from right to left, to a maximum of five rooms, order becomes very important. You can also set a normal room card down on top of any other room card, so if you find something more useful later (either due to its ability or the treasure that might lure a particular adventure into your trap), you can evolve accordingly. There are also advanced room cards, which are more powerful but have a catch – you can only place them on a like card. So for example an advanced room card of swords can only be placed on a sword treasure – not a holy relic one.

What really throws the game into high gear is when you build five rooms, you trigger a one time boss ability. These usually give you some sort of specific advantage, like searching the deck for a particular advanced monster room card you can immediately put into play. However, by the time this happens, you have nearly gone through the pool of hero cards. When those are depleted, you move onto the epic hero deck. These guys have a lot more life, reward you with double the coins when they die but also deal two wounds instead of just one should they survive your defenses. These guys tend to speed up the end game a great deal.

Now, if you have seen the box to Boss Monster, and you are over the age of about thirty, you will probably love the artwork. The box looks just like an old NES game box, with similar letter font and imagery. The cards themselves continue that theme, with a sort of fantasy/video game artistic aesthetic that works quite well. The cards are of typical size and thickness, which basically means that they are well enough made, but if you plan to play this a great deal, it might be worth investing in some sleeves like you would for Magic: The Gathering. Otherwise the corners and edges will undoubtedly fray and nick over time.

All in all Boss Monster is a great deal of fun, with art that strikes a nostalgic cord with me, rules and a role that remind us that being the bad guy can be fun too, and mechanics that are easy to learn. Once you know how to play, a two player match usually only takes about fifteen minutes, but three or four players might push a bit closer to twenty or thirty depending on the luck of the draw. This feels like a game that has ample room for expansion down the road, with one already having been released (naturally that box looks like a Game Boy game box).