The girls are back once again but this time it is not for their normal JRPG or SRPG shenanigans. Developed by Tamsoft, the makers of the Senran and Onechanbara franchises (both higher paced action games), comes Hyperdimension Neptunia U: Action Unleashed. Here you will see the CPU Goddesses and Candidates in an adventure that is much closer to the Warriors franchise, taking out hundreds and thousands of dogoos at a time looking while looking wicked while doing it. 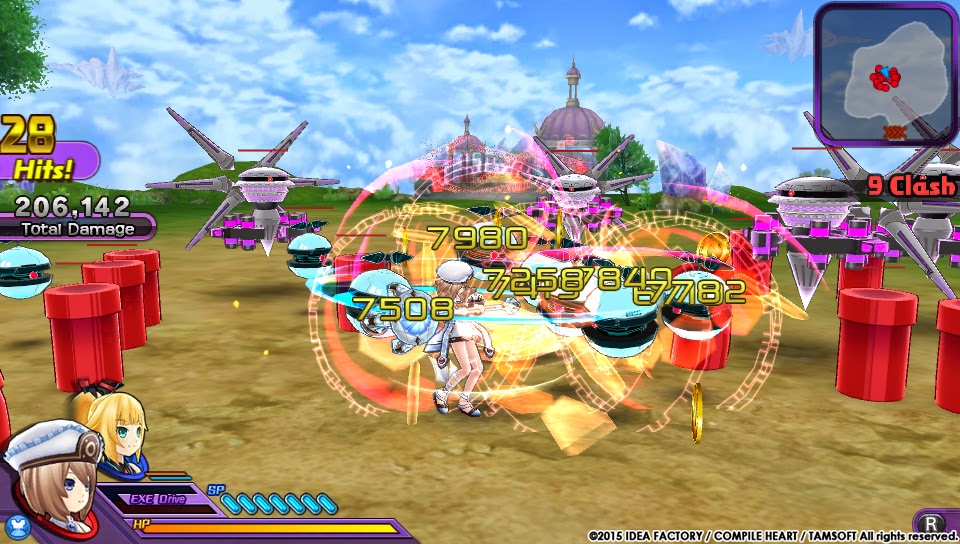 To start things off, players will have only two out of four options available in the main menu. The first is the main story and the second are options; get comfortable because the two other modes are not unlocked until after the main story has been completed.

Hyperdimension Neptunia U follows our favorite competing CPU Goddesses on a brand new adventure as they are being interviewed by two new characters Famitsu and Dengekiko who are based off of actual Japanese Magazines. These two fit in rather well within the already competitive environment that has been well established both in friendships and rivalries that we have come to love and expect from the main cast. As one of these two gets the bright idea to write up fluff piece on the CPUs, the other creatively tackles the younger CPU Candidates for her own piece as she tries to not quite be outdone but also not step on any toes. Seeing how well everything worked out for both articles, Famitsu and Dengekiko set out to combine their efforts with the other eight as they set off to each write a CPU / Candidate article to truly see who is really better than who. 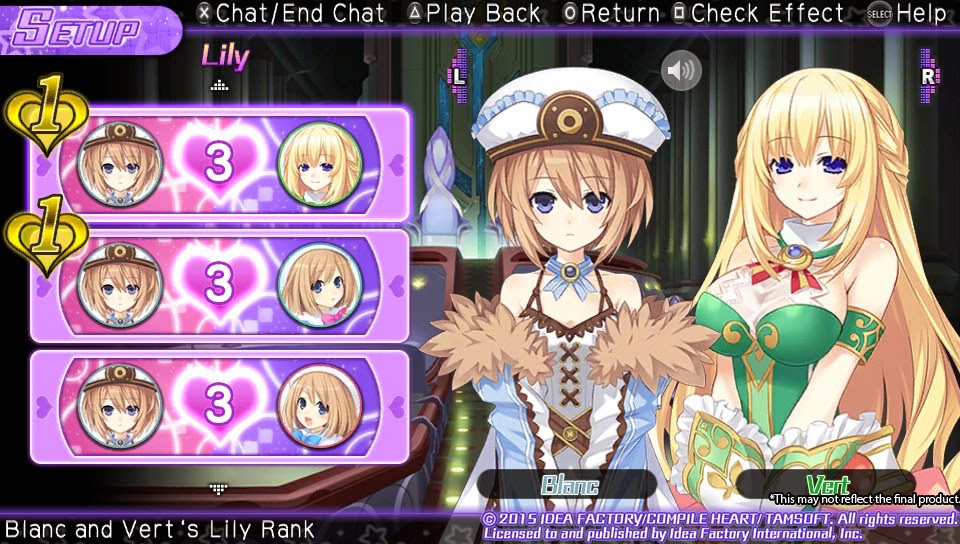 Stages are designed for quick and fast paced action segments and unlike the much longer Warrior style games, Neptunia U keeps things much shorter, clocking stages between two to five minutes max if the player is doing it right. Every stage is identified with a recommended level which should really be followed as playing outside the ballpark will generally get your team wiped out so fast that you will literally have no idea what actually hit you. Stage objectives follow a pretty standard formula in regard to mission objectives, from defeating a specific giant enemy to defeating several hundred or even a thousand enemies without falling in battle.

Since having these sorts of stages all throughout the game this would be boring, there are special stages that do not tell the player anything other than a recommended level. These stages are special and require the player to figure out how to beat them all on their own. These were interesting to take on because there was not much of a lead in and going with the flow was required.

To tackle the ever increasing difficulty of the stages, the girls are going to need to level up. While they do have access to their powerful HDD modes, the limited time with them is simply not enough as the enemies become more powerful. Leveling is handled as it normally would be while slaying enemies and gaining experience to enhance character stats to become more powerful. Acquiring new equipment and accessories however is a whole new system of its own. 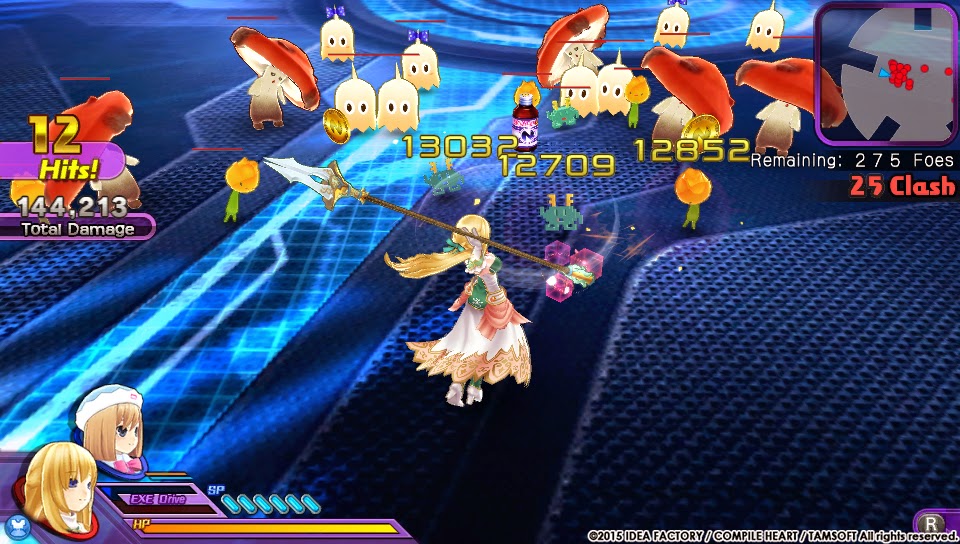 Instead of acquiring money or having a synthesis system, all major stat boosts outside of leveling up are handled by the collection of medals from defeated foes. Each foe has a category listing with a counter that easily tells the player how many medals have been collected up to that point in time. Within each of these listings are goals that need to be met in order to unlock new weapons, accessories, and stat boosts. Weapons are character specific so if there is one in particular that you want to aim for, it is easily achievable by simply aiming for missions that contain that specific enemy type. Upgrades to attack, defense, and hit points are passive and as soon as the medal count has been achieved, then the collection of the reward is applied to every available character.

This system works quite well as the players is going to be facing off against a variety of foes over the course of the adventure but does not have to worry about possible “low drop rates” just to be able to get that other weapon to tip the scales slightly more into their favor. The only issue with the presentation of the medal system is that while it does tell the player the total amount currently held, it does not tell the player how many of the goals have been reached inside of that enemy category. While this is not a big thing near the beginning, hours into the adventure it can make the process feel a bit long when trying to remember which ones have been fully completed and which ones have yet to be sometimes going in and out of every category just to make sure nothing was missed. 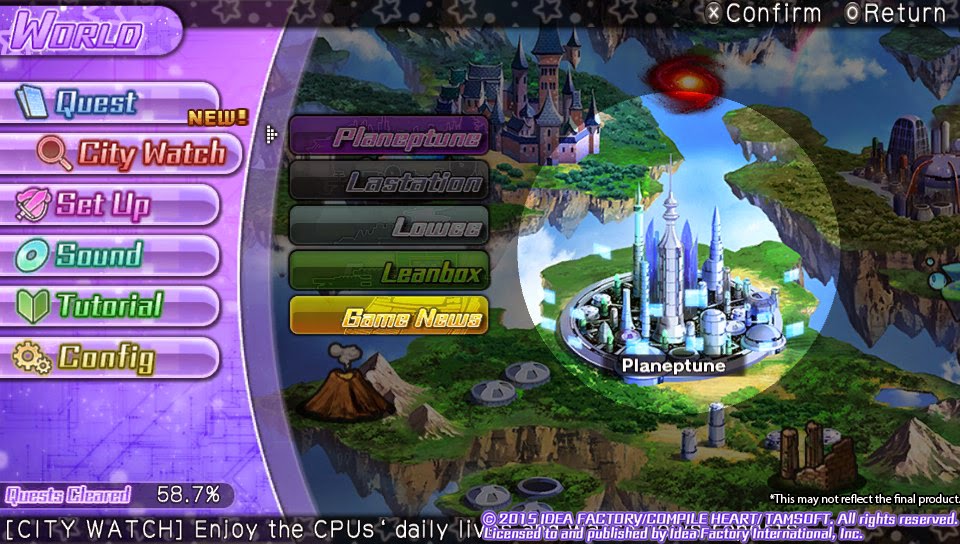 Once the main storyline has been completed there are several possibilities that open up. The first of these is in Chapter 4 which contains the final quests with some having level requirements of ninety-nine. For a bit more of a challenge however, the next item down on the main menu opens up in the format of Gauntlet Mode where the player can choose any character including the CPU’s HDD forms to go toe to toe in a tournament styled gladiatorial fight. Gauntlet mode offers three separate difficulties however considering the character levels finishing up Chapter 3; this mode feels like it should have unlocked itself steadily over the course of the main game in order for the lower difficulty settings to be more than just a quick trip through the rankings to the top.

Gauntlet mode does offer one other thing that I will be honest appeased, me as a fan of the series since the original iteration on the Playstation 3. There are several constants in the Hyperdimension games and those are the four CPUs alongside Neptune’s best friends Compa and Iffy (IF). Starting either with the CPUs or the Candidates, I noticed that the other two were simply not present. Being such a huge part of the series I thought in a way that it did somewhat of a disservice, but thankfully there was nothing to worry about. While they may not be playable, they make their appearance in the presentation of the Gauntlet mode and once that has been won, Iffy throws out something much more sinister and diabolical in the form of Neptral Tower. 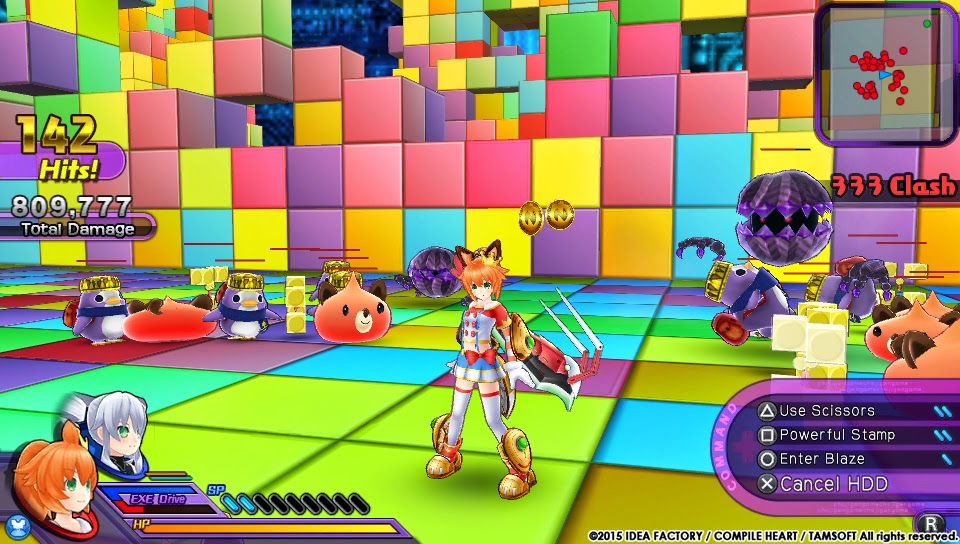 Neptral Tower, aka Gamindustri Tower according to the other characters, is a pure fifty floor dungeon crawl to the top. Each floor works like the quests found throughout the main chapter and works quite well in order to finish up missing medal categories as well as helping reach those much higher levels in order to compete in the last difficulty level of the Gauntlet Mode and the final quests of Chapter 4. The tower has but one catch. Whichever two characters are chosen to scale the floors must reach the top before any other character can attempt the same. This could be slightly difficult at times as each character has their own specialties and some larger enemies are made that much more challenging by not quite having the right skills for the job. It was moments like  this that truly showed what the Tower was made of requiring the player to prove themselves if they were going to make it any further to the boss lying in wait on the top floor.

“Hey, Idea Factory! I thought we had an agreement not to cross this line!”
– Neptune

Neptunia U does one more thing other than not being an actual JRPG and that is implementing a clothing break system like those seen in the Senra Kagura titles. This adds one more level of things to worry about when facing off against the hordes of enemies as not only is there the characters hit points to worry about, but there is also the loss of their clothes will result in a defense drop leaving them open to much more damage than they would take otherwise. While this does add a gameplay element that needs to be kept in mind, it also provides a decent amount of fanservice that the series can be known for. 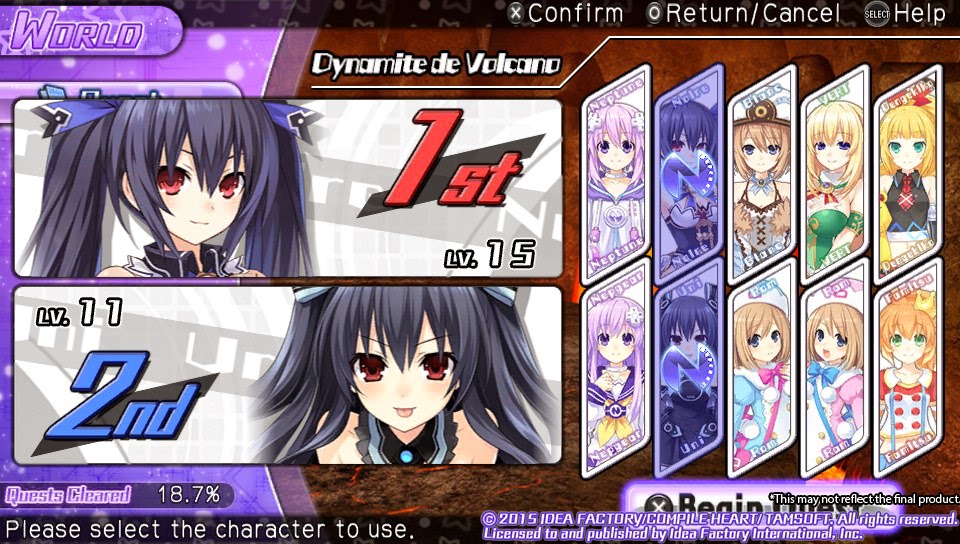 Now all depending on the player there are options that they can choose in regards to the character’s clothes. For those like me that will take any advantage they can get especially at higher difficulties where nothing more than a few hits can be the end of stage or a match, there is the option of unbreakable clothes. For those that prefer either fanservice or more of a challenge, easily breakable clothes or already broken clothes can be selected.

The hacking and slashing of Hyperdimension Neptunia U is something different but in a good way from the normal direction of the series. The style and amount of gameplay felt proper against the amount of dialog and banter between the girls making this fit in quite well into the overall series while waiting for Victory II.