And here? We are definitely fans of Samurai Warriors. Koei Tecmo had announcements for two separate titles recently.

KOEI TECMO America is proud to announce today the upcoming digital release of Samurai Warriors Chronicles 3, which will release on Nintendo 3DS™ and the PlayStation®VITA handheld entertainment system in North America on June 30, 2015.

This title, developed in continuous celebration of the franchise’s 10 year anniversary, aims to bring a brand new version of the Samurai Warriors universe to western Nintendo 3DS™ players for the first time since the IP launched in 2011, as well as offer PlayStation®VITA fans the opportunity to delve deeper into the rich and intricate storylines of Sengoku-era Japan.

Samurai Warriors Chronicles 3 incorporates the best features from previous Samurai Warriors titles, including the detailed customization mode and battle system of Samurai Warriors 4, as well as the Challenge Mode, which tests players’ speed and efficiency as they fight against the clock and thousands of enemies simultaneously!

In the Story Mode, players control either a uniquely customized character or one of the much loved, historically-inspired Samurai. Stories and lives unfold in multiple ways offering numerous resolutions to large scale battles and multiple endings affected by the players’ choices, actions, and affiliations.

Exclusively created to offer exhilarating action on the go, Samurai Warriors Chronicles 3 will fully utilize the Nintendo 3DS™ StreetPass™ and SpotPass™, as well as the PlayStation®VITA touch screen.

To celebrate this announcement, KOEI TECMO America is sharing a Samurai Warriors Chronicles 3 trailer along with a loaded package of assets containing screenshots, key art, logo, and more. 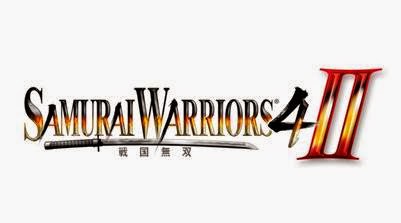 Samurai Warriors 4-II is a hero-focused saga. Unlike the previous Samurai Warriors games that focused on delivering their narrative by exploring the various regions of feudal Japan, this title casts a spotlight on the characters themselves, and tells their stories through thirteen exciting new chapters. These chapters revolve around nine characters introduced in Samurai Warriors 4, three fan-favorites from previous titles, and a brand new addition to the samurai roster.

Samurai Warriors 4-II will include many new and improved features as the battle, action, and character development systems have been revamped. The game also introduces a highly challenging and richly rewarding mode called: the Endless Castle. Players can choose to enter and struggle to survive for as long as possible, or play against the clock and see how far they can get up the castle’s increasingly difficult levels!