Mage Wars Arena may be one of the deepest games of its nature, with a combination of board game elements and card elements that remind me of Magic: The Gathering – a CCG I have a great deal of experience with. There is a great deal to take in with this game, but it provides an excellent dueling experience for those looking for some competitive tabletop gameplay.

The goal of the game is simple enough at its heart: you want to destroy your opponent’s mage while staying alive yourself.

The first thing to understand is the nature of Mage Wars Arena itself. This is a one-on-one duel using magic spells to combat one another. There are plenty of RPG-like elements such as the mana you can use to cast your spells to the need to track your hit points throughout the game. However, magic is not all just about slinging a ball of fire at something, but also summoning creatures to help in your contest against the other player. 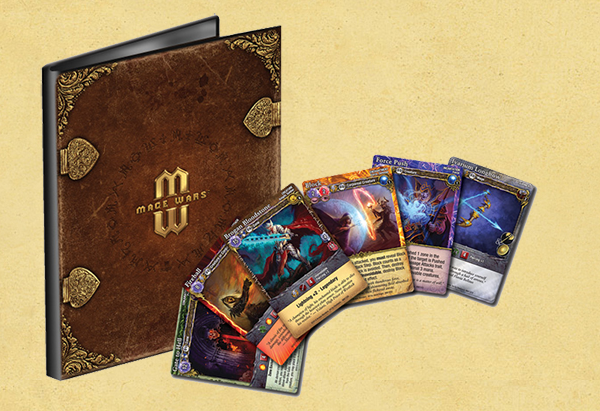 As a longtime player of Magic: The Gathering, I found many of the basic principles familiar to the point of being comfortable. Mage Wars Arena knows that it packs a great deal of content – it comes with a 45 page full color instruction book after all. However, the game gives you a few different options to play. Initially you will want to try out what they call Apprentice Mode. This is a very streamlined version of the game, with a smaller board space and the rules actually encourage you to simply play the cards how you think they should be handled. You will inevitably get a few things wrong, but the idea is to encourage players to get a feel for the flow of the game before worrying about becoming rules lawyers.

There are four different mages to choose from – each one has its own particular style. Beastmaster and Warlock are more aggressive, where Wizard and Priestess are both more defensive. The only combination of mages I disliked was when Wizard and Priestess matched up, because the game suddenly felt like it took a great deal longer. Warlock has a lot of direct attacks, Beastmaster is great at summoning critters. This allows them to attack and be counterattacked regularly. The Priestess is all about healing while the Wizard drains mana from his opponents. These two classes have a bit more give and take against the more aggressive classes, but when pitted against one another can really make for a much slower game. 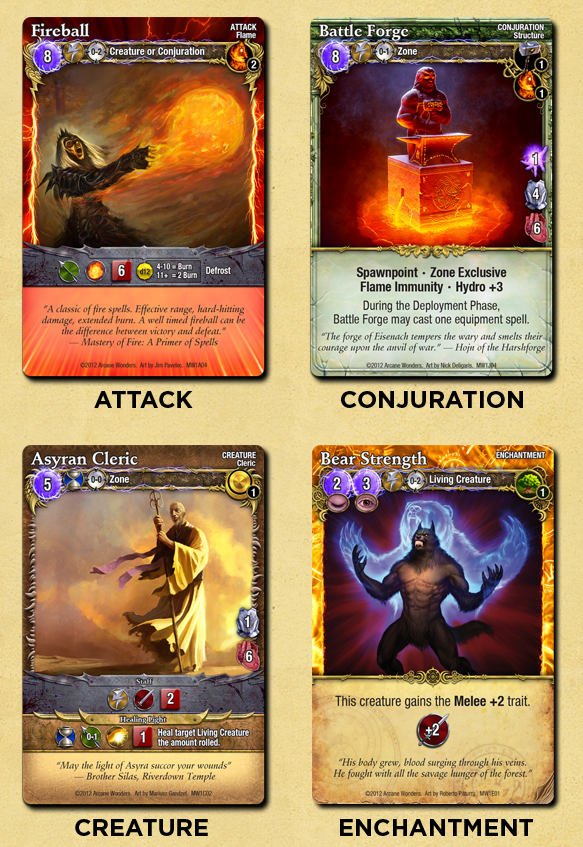 During the first few games, you will want to use the simplified rules and spellbooks. However, once you are familiar with the mechanics, it is time to customize your spell selections and to really hunker down and learn the rules of the basic spells. The actual flow of the game is quite simple, with the players taking turns, moving characters, setting aside spells to use (though you may not always choose to cast them depending on how the turn plays out). The pacing is like a more natural Magic: The Gathering, but without the pitfalls of the CCG.

First, you are buying a core set that has balanced decks – so this makes the game an even playing field and not a buy-to-win situation. Additionally, common issues that can ruin almost any game of Magic: The Gathering (such as bad luck draws and mana shortages) are not present here. There are elements of luck now and again, but by and large I felt like I was responsible for my own victory or defeat. Certainly my opponent had an equal hand in it, but as much as I love Magic: The Gathering, anyone who has played it has had that maddening feeling of being one land short or hoping against hope for that one big card to play. Here you have those options at your disposal, but it is a matter of strategy. It is not a bad tactic to put a big creature down early, but depending on how your opponent is playing, several smaller ones might make more sense. 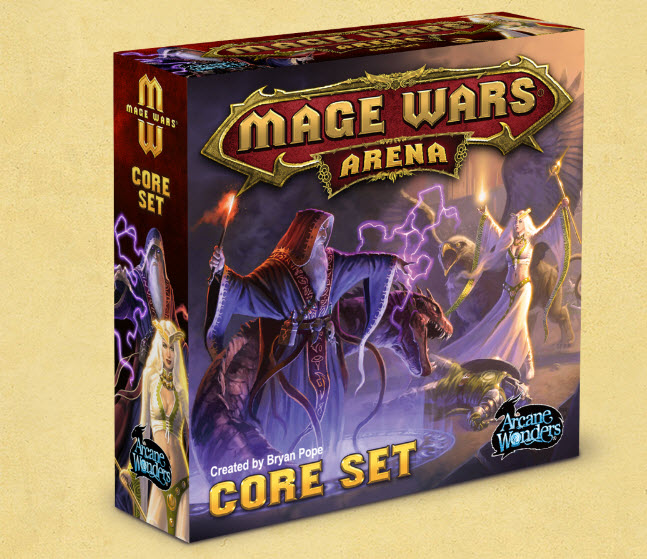 That being said, luck plays a part in combat and rolls. You cannot have it all pan out the same way every time, right? Where would the replay value be in that. So when creatures engage in combat, the luck of the roll is certainly a key factor. This is just enough to make subsequent games feel very different from the previous ones. Changing which mage you are using or how you plan to play out your spellbook can make each game feel decidedly different than prior rounds.

Now to talk about what you get in the Mage Wars Arena box – and there is a great deal here. First of all is a large six panel board. There are plenty of dice, markers and spell cards as well. The cardboard components are thick and sturdy – they hold up very well to multiple games without fraying or falling apart. The cards are of average size and thickness – not terribly heavy duty, but they are not flimsy either. My favorite components are the two spellbooks. These are covered card binders that you slide your cards in and out of to serve as your spellbook while playing. On top of the excellent construction, the artwork is actually very attractive. Lots of dark, almost brooding colors and excellent creature and spell art make for a consistently pleasing package from start to finish.

There are really very few things for me to complain about – Mage Wars Arena really appeals to my CCG-loving side, but without the constant drain on my wallet that can come with trying to stay competitive with others. It is a game that continues to grow and reveal new facets of itself after multiple play sessions. It is balanced and incredibly well thought out. If there are any concerns, they come in the form of the dense rules. Newcomers might be somewhat put off by all of the content, and even experienced players could lose themselves in some rules lawyering when there are two different interpretations of how a card should play out. This can create some very long games, which are still incredibly enjoyable, but require a bit more of a time investment than others.

Simply put, I absolutely adore Mage Wars Arena and feel it is one of the best board games I have ever had a chance to play.