comments Share
You are reading
The Witcher 3: Wild Hunt – Xbox One Review

In an unpopular article, I recently demolished The Witcher 3: Wild Hunt in a review for the PlayStation 4 due to technical issues and while I work closely with CD Projekt Red’s fantastic support team in an attempt to work through the issues I felt it prudent to give the game another go on the Xbox One. While there had been one large hiccup (due not to technical issues in CD Projekt Red’s release, but rather to a patch that Microsoft released for the Xbox One), it has largely been seen that there were fewer issues on the Xbox One than what I had seen on the PS4. Given that I truly enjoyed the story, I wanted to experience what it was like on a system that was running it in the fashion that I was expecting. Here is my review of Witcher 3 on the Xbox One. 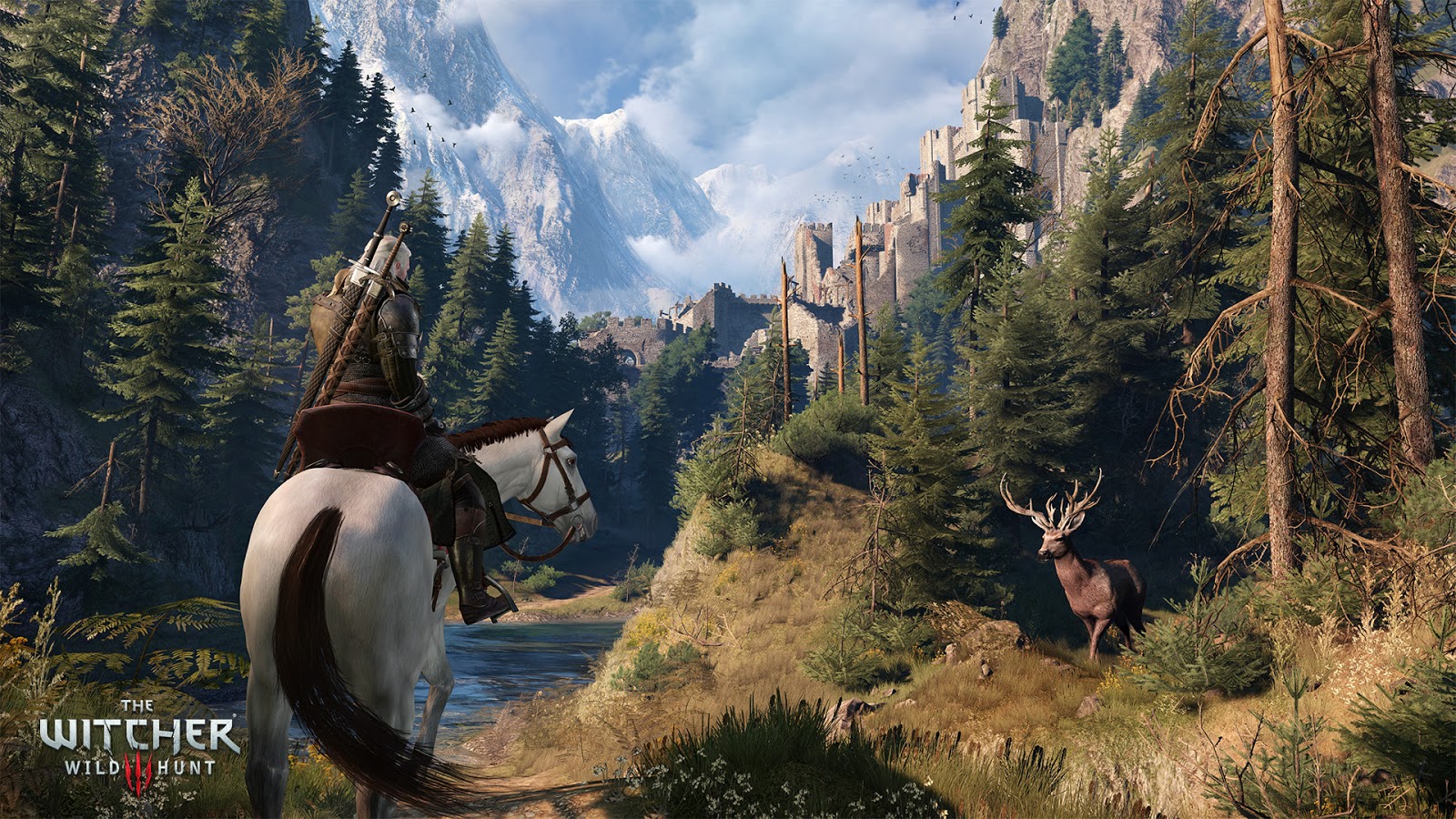 While the PlayStation 4 tends to put out a higher resolution, the difference in Wild Hunt across the two platforms is negligible as Witcher 3 on the Xbox One is the systems best looking game. Period. Sure Destiny, Shadows of Mordor, Tomb Raider, and Grand Theft Auto 5 look great, but none of those games hold a candle to the pure graphical quality of the Witcher 3: Wild Hunt on the Xbox One. In the prelude/tutorial section Geralt walks out onto a balcony overseeing the land surrounding Kaer Morhen and it is breathtakingly gorgeous. Surrounded by mountains, Kaer Morhen looks over a lush, pine-filled valley that stretches as far as the eye can see.

Husky-voiced and gruff Geralt even comments that it is a beautiful vista and yet, for as stunning as it is, the view is pale by comparison to some of the other views that you will be rewarded with throughout your travels across The Continent. For those that took the time to read through my blasting review of Witcher 3 on the PlayStation 4 you will find that I had numerous issues with pop-in and entire sections simply not appears (leading to me falling through the world). With Witcher 3 on the Xbox One that is not the case, though there are a few spots where textures would take a half-second to appear, I found that it only happened if I was galloping Roach and then suddenly rounded a blind corner (whipping past the windmill in White Orchard was the most common location for this); the world would be there but everything would be fuzzy for a quick moment then the text would appear. Far better than what I found on the PlayStation 4. 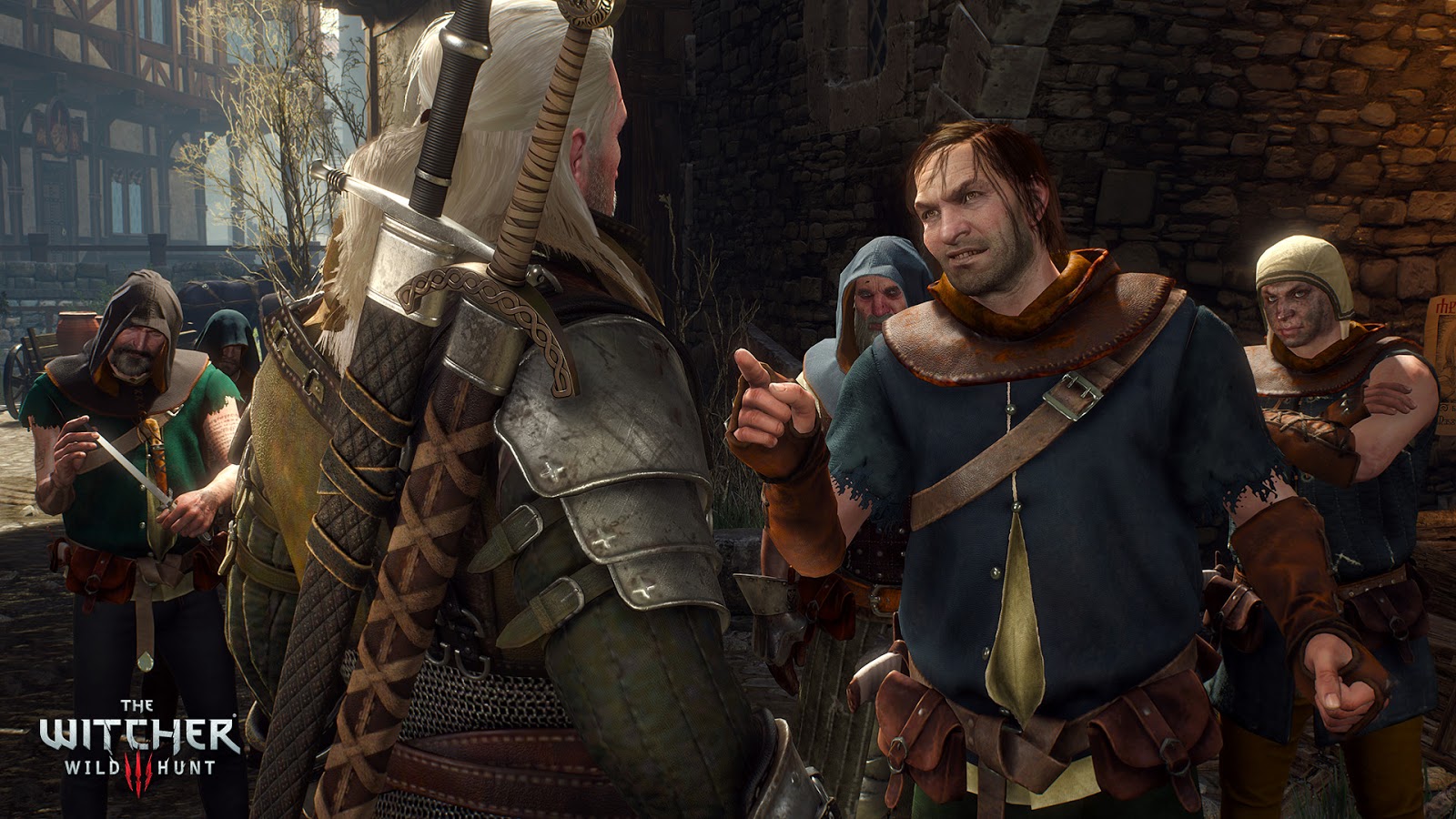 The utterly annoying issue of igniting / extinguishing candles, accidentally looting (aka stealing) from a merchant’s table still exists, however CD Projekt Red has announced that they will be addressing that issue in their next patch so it is a small annoyance, especially given the fact that I am aware of it. New players may run into a few issues with it, especially if they are standing in front of a merchant’s stall in Novigrad or Oxenfurt and accidentally steal something since the guards will utterly destroy you. I do have to say that I have seen only a couple of the t-frame animations issues on the Xbox One and those were limited to a merchant that was wandering the roads and to a bandit that I ran into while raiding a bandit camp; outside of those two points I have yet to see an issue where NPC’s failed to load correctly or were stuck in a t-frame. A refreshing change from the difficulties of the PlayStation 4 copy.

Like the PlayStation 4 version, the audio is simply spectacular, were we still reviewing individual aspects of a game (the way we did a few years ago) The Witcher 3 would easily score a perfect 10. It has some of the absolute best voice acting I have found in a game, whether it is Geralt’s raspy voice, Yennefer’s sultry tone, Ciri’s driven and commanding acting, or an NPC that has a distasteful view of mutants (Witchers), they are simply put, perfect. To accompany such splendid voice acting comes a soundtrack that rivals the best of Inon Zur, famed composer known best for the Dragon Age soundtracks. From the sweeping scores as you overlook a stunning sunrise to the heart pounding and adrenaline pumping combat themes, the music is stunning. Though for as wonderful as the music is, you may find yourself turning it down just to hear the ambient sounds of the environments. Walking through any of the larger towns or villagers will assault your ears with a bevy of environmental effects such as birds chirping, dogs barking, or the sounds of day-to-day life and it truly brings each area to life. Though wandering through the wilderness is dangerous, taking a stroll through the absolutely gorgeous forests is excellent as you hear the wind whistle through the trees, causing the branches to creak and class. Walking along the coastline in Skellige will present you with the sounds of gulls and the splash of the tide or meandering through a crypt or cavern will be suitably eerie with the echoes and scratching of distant rodents. The Witcher 3 feels alive and I fully believe it is due to the superior sound engineering as it is near-perfect. 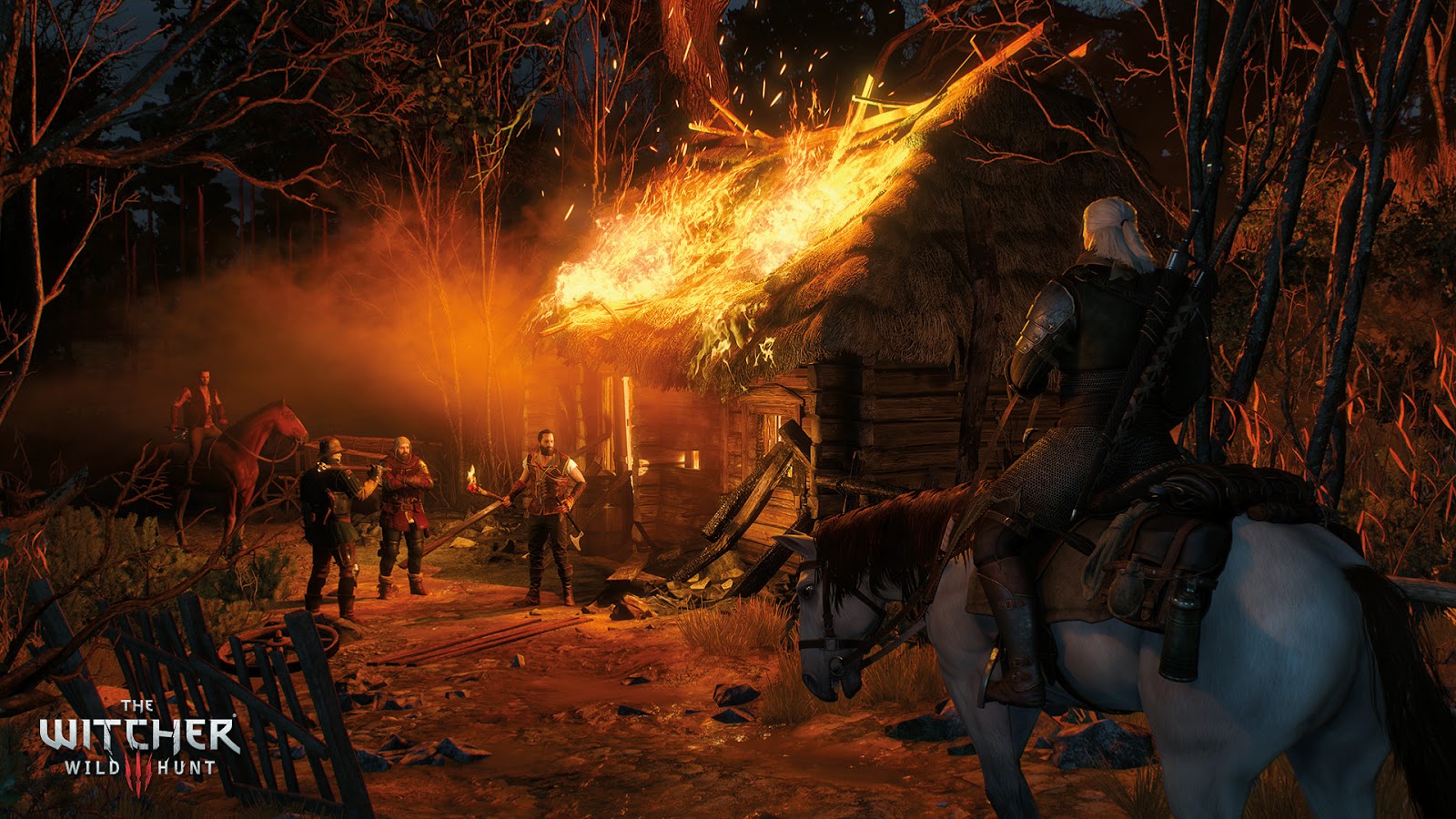 Gameplay has much improved over previous titles; Geralt feels more alive and spry, though unlike The Witcher 2: Assassin of Kings, he does not feel as grounded. I felt that Witcher 2 had a bit more weight to it, from the way that Geralt would dodge or run to the way that combat felt, Witcher 2 just felt more solid. The Witcher 3 feels more fluid, almost like a dance, whether that is walking through the crowded streets of Novigrad’s Temple district, through a masquerade thrown by the local nobility, or when you are in combat with a half-dozen bandits or a pack of wolves. Timing in combat, like the previous games, is everything. Simply smashing the X or Y buttons works, but tends to be clumsy and reckless. Timing your fast attacks, strong attacks and the use of your Signs properly will yield far more satisfying results. I cannot help but feel at times like I did in the Batman titles as Geralt flies from foe to foe dismembering or disorienting as he goes. It is truly wonderful and there are times where I feel a little let down because there are simply not enough enemies on screen to demolish. On the flip side though, there are plenty of times where the challenging combat can throw a mix of enemies at you which makes it extremely difficult. If you get flanked, you will get pounded into the ground so crowd control is a must. Which is where Alchemy and Bombs come into play …

More so than the other games, Alchemy will play a massive part in Wild Hunt; there were long stretches in the first two games where I would simply forget to apply an oil to my blade or drink a particular concoction and was still able to get through whatever challenge I was confronting. In Witcher 3, the farther you go into the story the more important it is to pay attention to your quests and apply the correct oils or drink the correct potion because if you do not, you are in for a world of hurt. The same goes with the grenades that you have access to, as some enemies, like foglets or ekimara’s have special abilities that allow them to go invisible yet there is a bomb that you can make that prevents them from slinking into the shadows and using it will exponentially increase your survivability. Some enemies, like Ice Elementals are naturally vulnerable to fire so the Dragon’s Dream bomb, which deploys an ignitable cloud of gas that you can explode with the Ignii sign for massive fire damage, or Dancing Star bomb, which sets anyone in its path on fire, can turn the tide in a challenging fight. 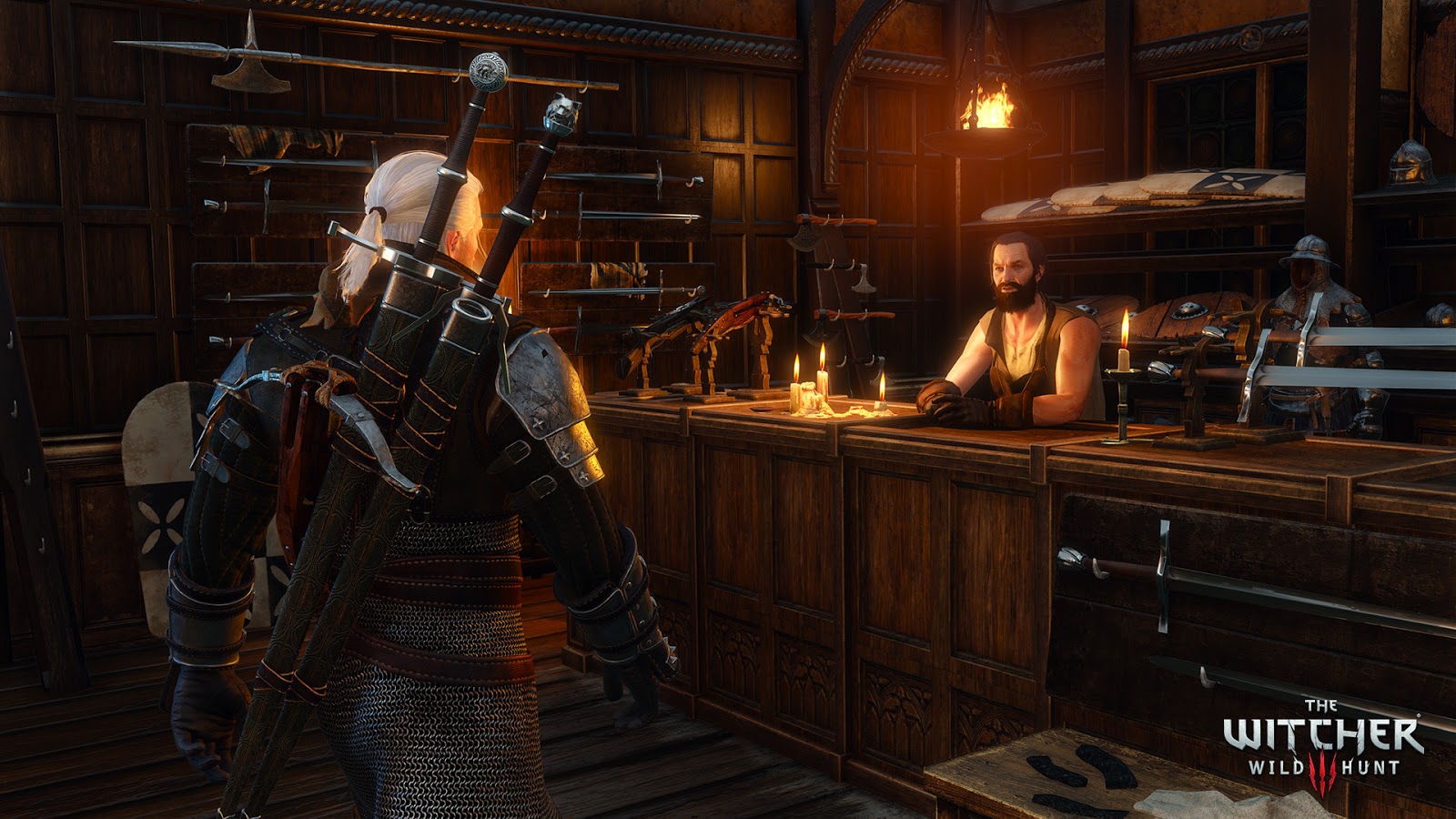 On top of Alchemy and Bombs, crafting plays a huge roll in Wild Hunt and I found that I was constantly gathering materials to have numerous weapons with various runs implanted in them so I could take on almost any challenge. Runes will go through and add effects such as freezing, burning, poisoning, staggering, bleeding, and stunning to the various weapons and I found that having a few steel blades in my inventory with varying Runes was incredibly helpful (the same goes for the silver Witcher swords). It made inventory management a bit difficult, especially since I would carry around an extra set of armor, but it was well worth it.  The one thing I did notice though is that with crafting and the correct mutagens Geralt can be far more powerful than he should be as in some cases I was able to take on enemies that were 8-10 levels above me (even playing on the Death March difficulty, with careful preparation and a ton of patience, it is possible).

The Witcher 3: Wild Hunt is massive and can easily take upwards of 200 hours to complete, though the main story can be burnt through in about 30 hours. I strongly recommend focusing on completing the game to 100% as the story, side quests, and minigames (like Gwent or the fighting rings) are all interesting, something not found in a lot of RPG’s with “busy work.” Unlike the standard “go-fetch” quests of other RPGs, the side quests in Witcher are generally “go destroy this beast” though there are plenty of treasure hunts available. What is unique is that while most Witcher Contracts all follow the same formula, the small stories that go along with each one differ just enough and yield results that can be wildly different. In some requests you will receive a small pittance and maybe unlock new merchant or blacksmith, others if done one way will see entire settlements wiped off the map or emptied of civilians. More so than any other game I have ever played, each quest or decision in The Witcher 3 has consequences and that is simply glorious. 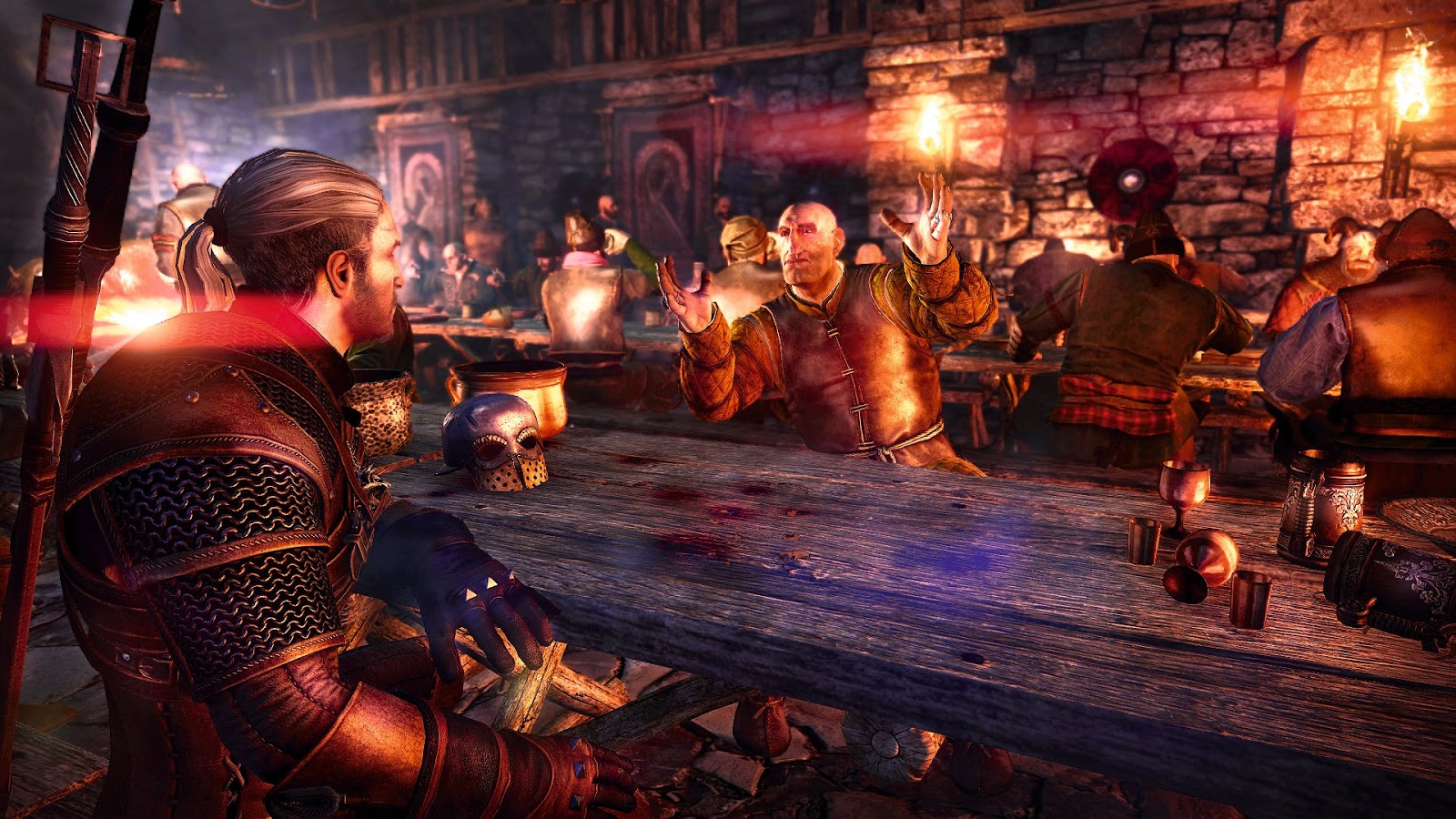 Playing The Witcher 3: Wild Hunt on the Xbox One was a completely new and eye-opening experience. Far more technically solid that its PlayStation 4 counterpart, the Xbox One version yielded far better results and framerates than anything I saw on the other system. When I reached the “Oxenfurt Drunk” quest that caused the biggest disruption in forward progression on the PlayStation 4 I was hesitant to even try it so I made six separate saves before getting into the quest. Fortunately I did not run into the glitch that I did on the PS4 and I was able to complete it successfully with little trouble. These lack of technical issues made me see the Witcher 3 in a complete new light and allowed me the simple pleasure of just playing the game that it was meant to be, and it is one hell of a game. The Witcher 3: Wild Hunt on Xbox One is THE game to beat and even with the impressive 2015 lineup of games to be released, I am not so sure it will be done. As of this moment, The Witcher 3: Wild Hunt is my absolute contender for Game of the Year.