What happens when you marry two very different but popular genres? Well, I suppose it depends on the game types you are talking about, but Guncraft: Blocked and Loaded takes FPS popularity and applies it to the block building goodness that games like Minecraft helped to popularize. The end result? A surprisingly fun experience.

The biggest thing that this newest take on voxel-based gaming has going for it is a significant amount of content. Without access to things like the Steam Workshop (something that the game leverages in its PC release), I was concerned as to whether or not the content would get burned through too quickly. Wit a total of 550 levels and over 300 pieces of different gear, there is plenty to unlock, which is huge for someone such as myself.

Call of Duty games tend to grow somewhat stale for me moderately quickly. I like the online modes, but I am only average at best in them. However, the unlockable content keeps me coming back for me, attempting to complete challenges as I sink more hours of my life into those games. With even more unlockable content to be had here, I found myself repeatedly getting sucked back into the leveling loop. 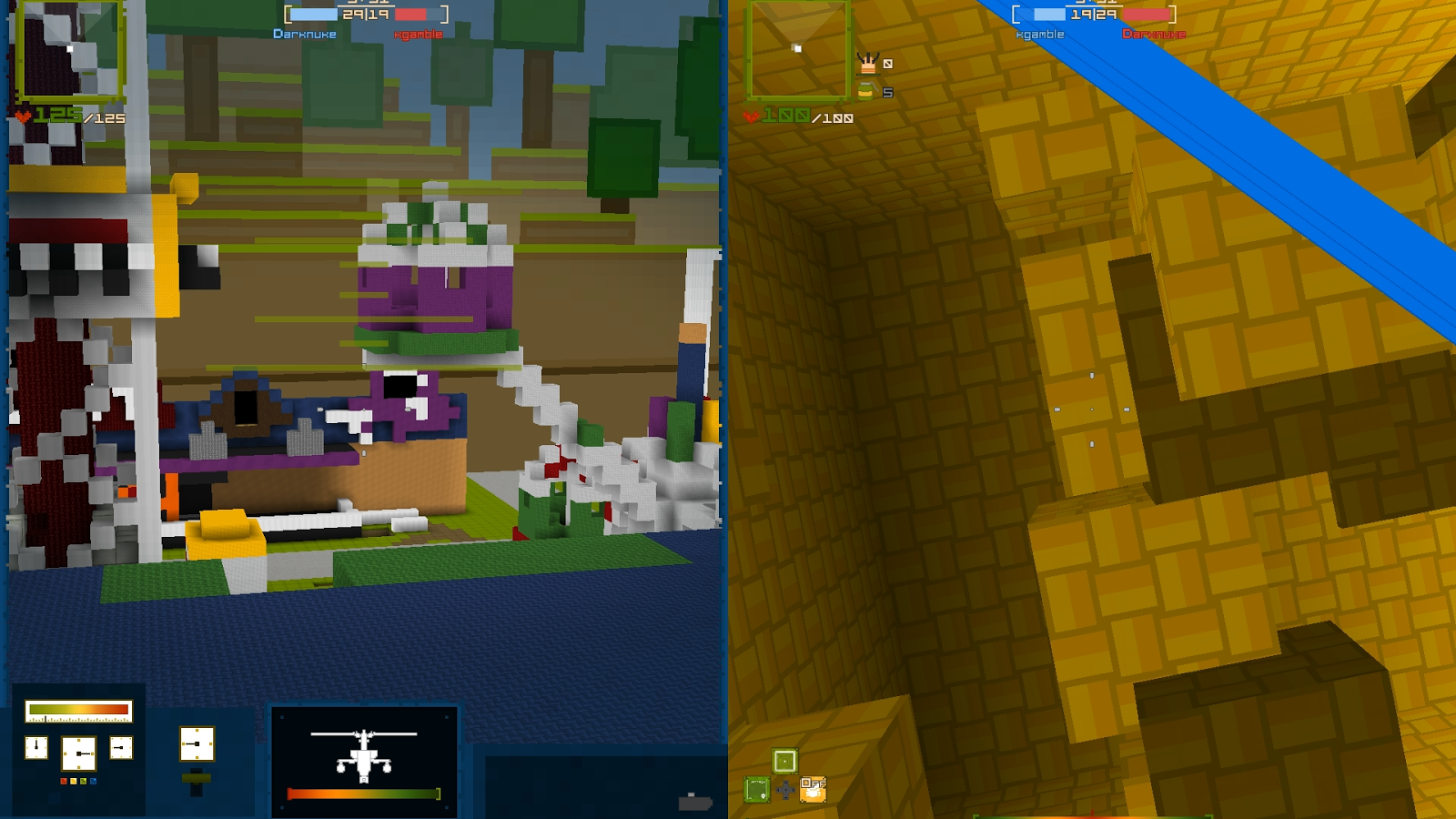 For those familiar with the PC version, this take on the game comes with all expansions. In addition to that, Guncraft: Blocked and Loaded offers new maps that are exclusive to this console. This was a game that was clearly built with local play in mind, as there is a split screen option as well. My son and I made good use of it. He was a bit better than me at it, especially the building component – likely due to the ridiculous number of hours he has spent playing similar games.

One of the best things that Guncraft: Blocked and Loaded has going for it is that the building tools are highly accessible. I feel like there is very little variance in how the majority of FPS titles play, so getting that part down, while important, was likely not a tremendous challenge. By comparison, the toolbox needed for crafting zones is a much more open-ended affair that could have gone very right or very wrong. Thankfully it trends towards the former as the controls all work intuitively and the menus are easy to navigate.

The presentation is pretty much what you would expect. They are a nice additional layer to the game, but do not really help or hinder it a great deal. Sound effects are both simple but effective, while the music compliments what is happening without ever getting overpowering or distracting. The visuals are almost exactly what you would expect from a voxel-based title like this. Bright, colorful, distinctive, everything moves well and looks good while doing nothing to stress the Xbox 360 hardware.

I have seen plenty of other games try to merge these two genres together, but I think Guncraft: Blocked and Loaded handles it the best to date. The overriding concern I do have, is what the title’s longevity will be. There was a world of difference between plugging away at the game in a single player environment and playing it with a friend or my son. The PC version of the game released to positive reviews overall, but for some reason players seemed somewhat quick to drop the game. Having spent some time on the PC version previously, I can recall when the servers seemed quite active near the game’s release, and now hardly anyone seems to be on it. I am hoping that the same fate does not befall this release, because Guncraft: Blocked and Loaded is a solid game that is worth a look.