Nick hooked me into reviewing this game by telling me “it’s essentially Minecraft in space” but it was also made of fully destructible worlds rather than the Minecraft blocky style and featured space exploration. I was stoked! But I was also cautious. The game was getting some really negative reviews on Steam with players blaming the devs for releasing it before it was finished. Unfortunately I have to agree with them. Masterspace was a fantastic idea that with a little more spit and polish would easily have become a new favorite game. 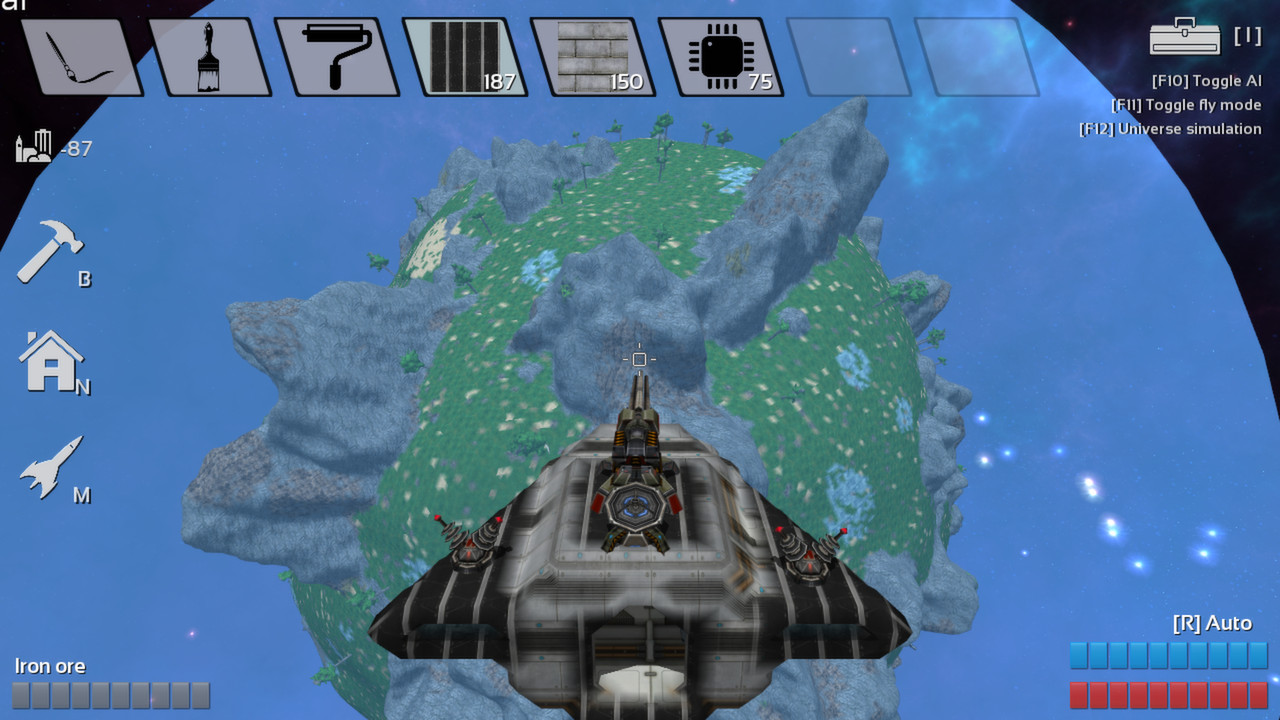 Masterspace starts you off just like Minecraft does, alone in a New Zealand like environment with little to nothing at your disposal. Masterspace is a kinder mistress than Minecraft and gives you a pick and a shovel off the bat so you can skip the brow knitting phase of bashing a tree with your hand to get the necessities for creating your first tools. Your mission is essentially to mine or harvest raw materials like stone, iron, gold, grass, and dirt to create building materials like stone bricks and wood boards. These building materials are refined from the raw goods using various machines that have different costs to acquire.

The game forces you to build by adding a culture worth to each building material. A steel panel gives more culture than dried grass for example because it costs more to create. Each building block you place counts towards your culture total. This increases in intervals giving you perk points to spend on unlocking new machines, weapons and spacecraft parts. The ultimate goal is to survive the monsters and become advanced enough that you can launch yourself into space and explore new planets. 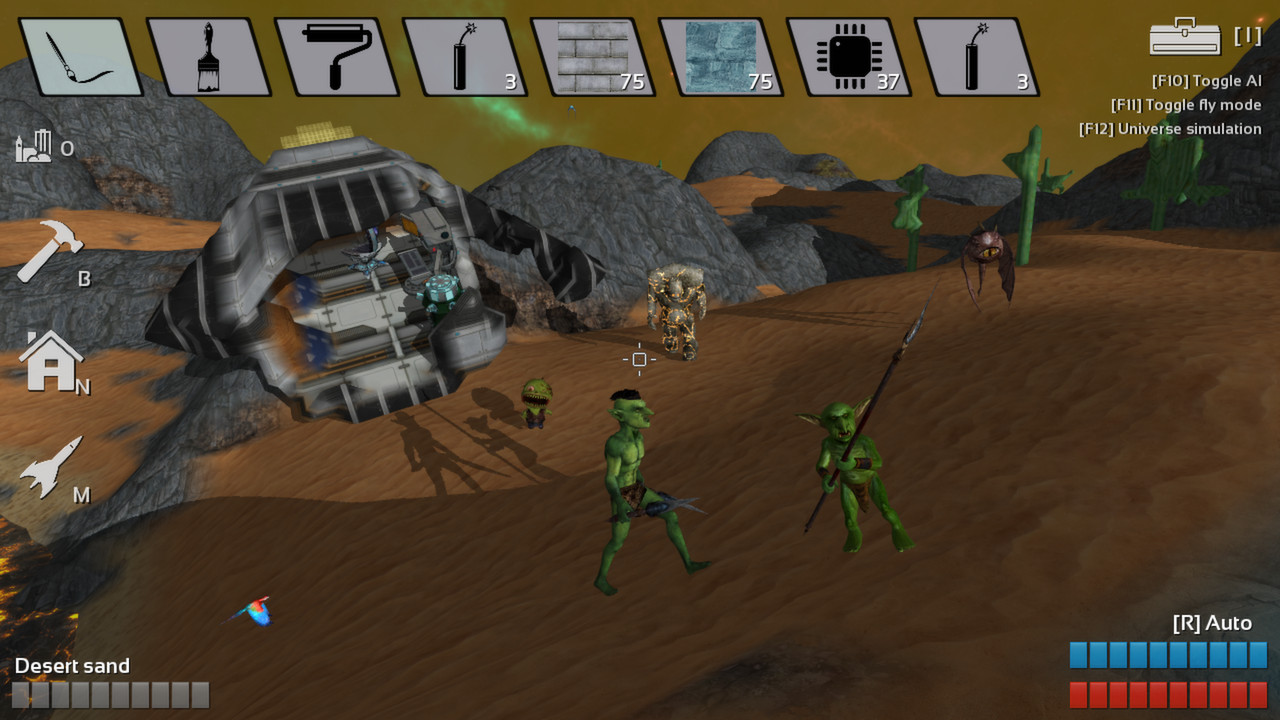 It also comes with its own oddities.

While Minecraft has skeletons and zombies for monsters Masterspace has gone a little more otherworldly with its fauna and included killer snakes and dragonbugs (They look like a cross between a dragon and a slug with nasty looking teeth). You also get a fantastic view of the starry sky above you waiting to be explored.

The harmonious and slightly futuristic soundtrack fit beautify with the games intent making you feel like you are far away and getting you into the Zen mode of collecting recourses and building different structures. The soundtrack even alternated wonderfully between the soft and quiet, to a louder and more rousing song to keep you engaged thus preventing things from becoming monotonous (one of the things I don’t like about the Minecraft soundtrack). 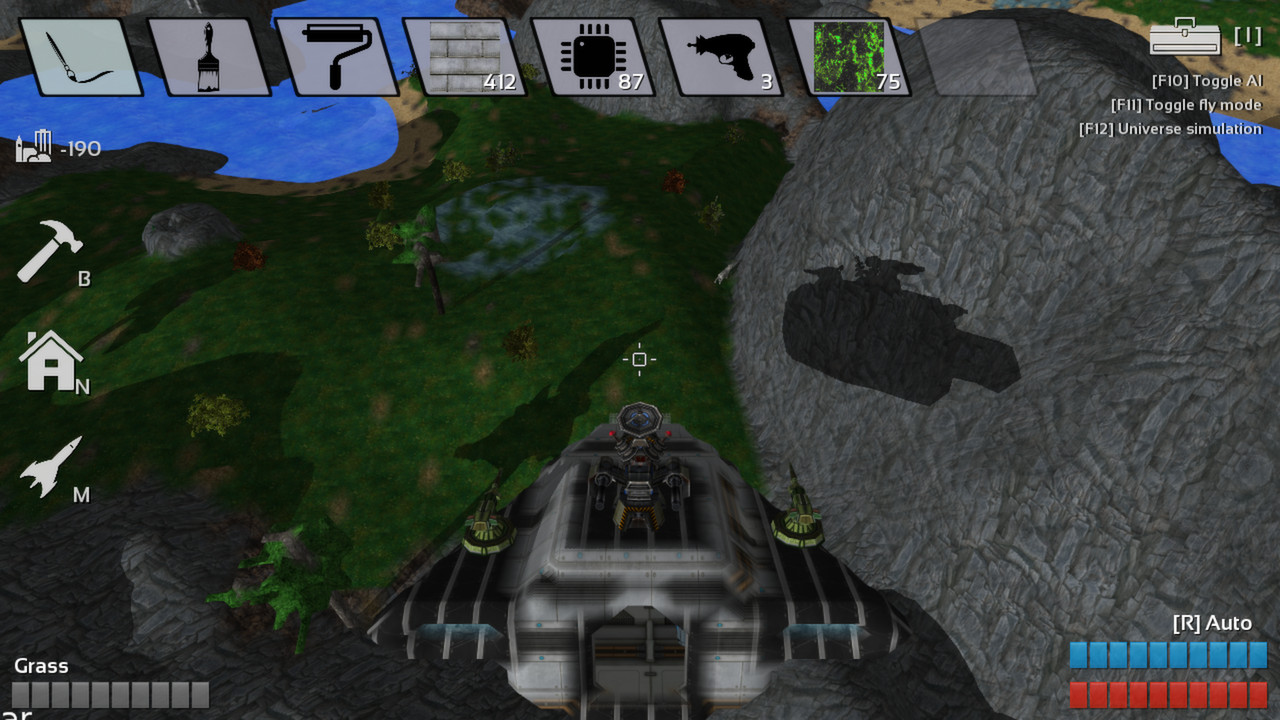 I love the core concept, especially the idea of culture and perk points. They really push you to build and expand. I also love the idea of being able to go to new planets and explore space, it’s like Minecraft 2.0. Even the destructible world idea was a step above the blocky look of Minecraft. However the game needed a lot more work to become what it could have been.

There are so many little details that make this game feel unfinished. For example, when you harvest wood from a tree the leaves don’t disappear once you have taken all the wood. So you’re left with gobs of floating leaves that you really aren’t motivated to clear since the resource isn’t needed.

The animal AI is terrible. All the cows, sheep, pigs and monsters essentially walk in a straight line occasionally turning around with no pathfinding abilities. Mining dirt often meant creating a tunnel that all the animals in the surrounding area would eventually fall into and never leave regardless of how open and accessible the entrance was. 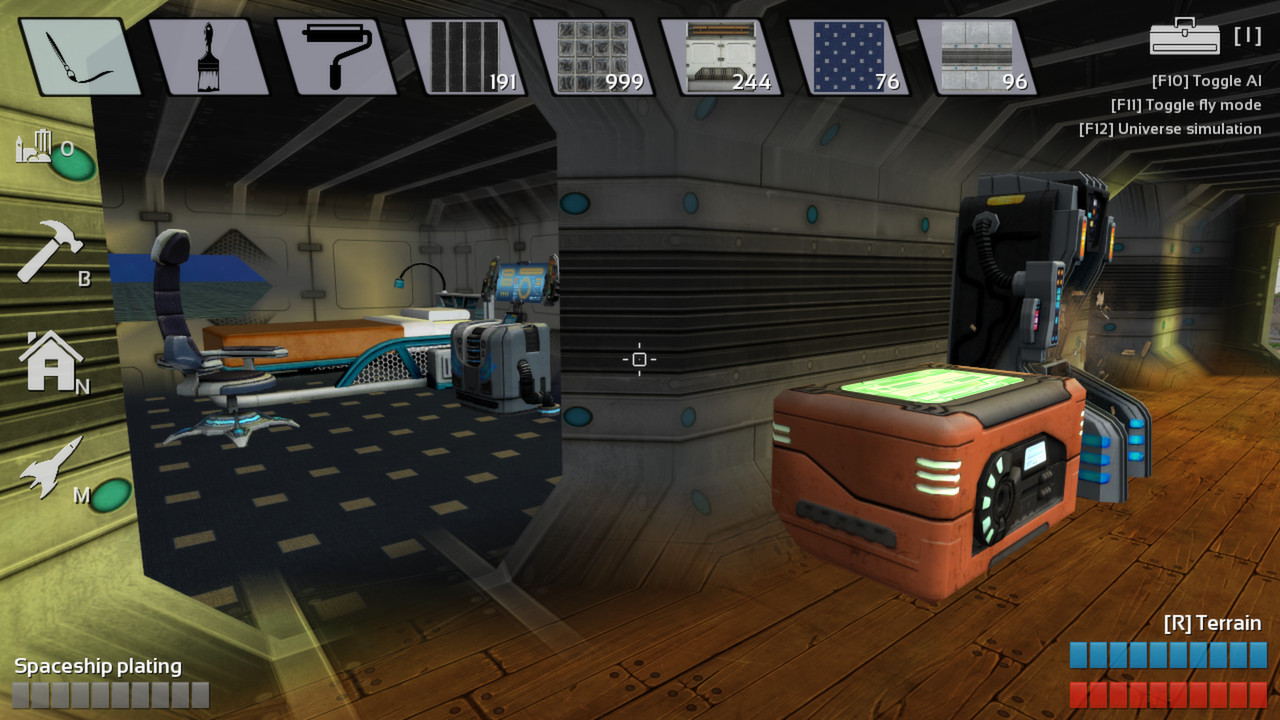 One thing that drove me nuts was building on a circular planet. When you first place a building block on the ground it creates a building “instance” and each block connected to the first is registered as being a part of that building. Because the planet is so small, the curve of the earth is quite pronounced and when you create a larger structure the building will sort of hang off the curve unable to follow it. It’s almost impossible to flatten that ground with dirt or sand. Laying another row of blocks under your building to make it look better results in you creating another “building” because it’s not attached to the first and the two just don’t line up. Everything except the smaller structures look patchy and unfinished. Part of the appeal of a sandbox game like this is creating cool bases. Not being able to create something that looks good is a major downside.

When you finally do get to build a space craft it looks like a disaster waiting to happen. There’s no door and when you “launch” into space there’s no rocket animations or anything, you just sort of…float up. It’s very anticlimactic and it just looks unfinished. Not to mention the finished craft turns like a boat in space.

All of these points may seem trivial but they add up to give the impression that this is still an early access game when it is actually the full release making it that I understand some of the other player’s frustration. It’s sad that Master Craft turned out this way because Master Technologies had a great idea. They just didn’t follow through with the finishing touches.