I’m a certified hack ‘n’ slash expert! Okay, “expert” is probably a bit of a fraudulent stretch.  In fact, I certainly and objectively suck compared to the player who can perform a no-damage 30 minute speed-run of Bayonetta on the hardest difficulty whilst, for added challenge and absurdity, her hands are oiled and confined within 14oz boxing gloves. 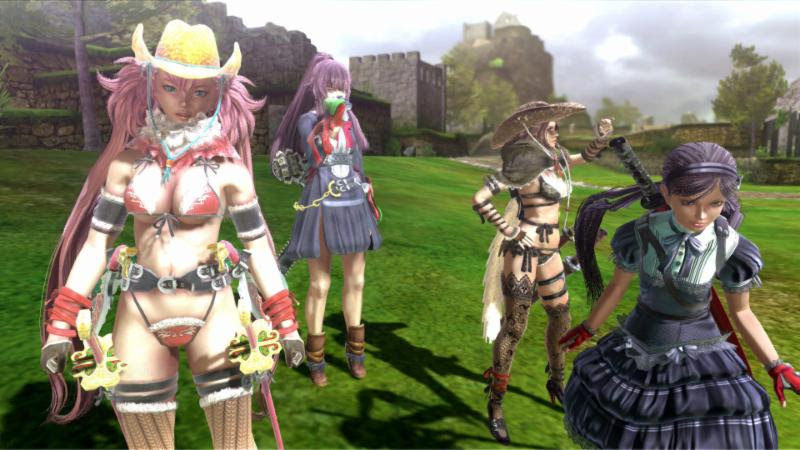 But I do play and enjoy a variety of hack ‘n’ slash titles — those I can manage to get my mediocre mitts on — from the mainstream to the niche and everything in between. These can range from mass peasant-spanking simulators like the Dynasty Warriors franchise to anger aptitude tests such as Ninja Gaiden Black. And after having the fortune of experiencing Onechanbara Z2: Chaos, I must tell you, my possible fellow hack ‘n’ slash aficionados, while wafting the energizing scent of my own self-satisfaction:

If you don’t mind the game’s arguably welcome single-minded focus on insurmountable babes, impossibly durable bikinis, superabundant undead bloodshed, and don’t take issue with incredibly linear level design as well as imbalances in level length, then you will discover a combat system in Z2: Chaos that, while not as complex combat-wise as the likes of Bayonetta or Devil May Cry 4, can be just as satisfying as its contemporaries within the genre.

The story is an entertaining mixture of surreal nonsense: Two groups, the Vampiric Clan and the Baneful Bloodline, have been mocking each other’s ridiculously ample bustlines and swiping swords at one another’s bikini breastplates for decades to determine which group is superior. But when a greater evil threatens to swarm the world in a mass of undead viciousness, two sets of sisters from the opposing groups decide to collaborate, traveling the world to eviscerate inexplicable henchmen in a stylishly frenzied manner. There is camaraderie, there are cowboy hats and there are a few jokes about overly ample bosoms channeled through a narrative told in still comic book panels. There is a girl in a dress who attempts to bonk our heroines in their faces with a spiked club because… I don’t know? She’s apparently jealous of how they retain favorable hip-to-waist ratios despite eating like bear cubs deserted on a salmon farm (which is a almost certainly incorrect speculation on my part). 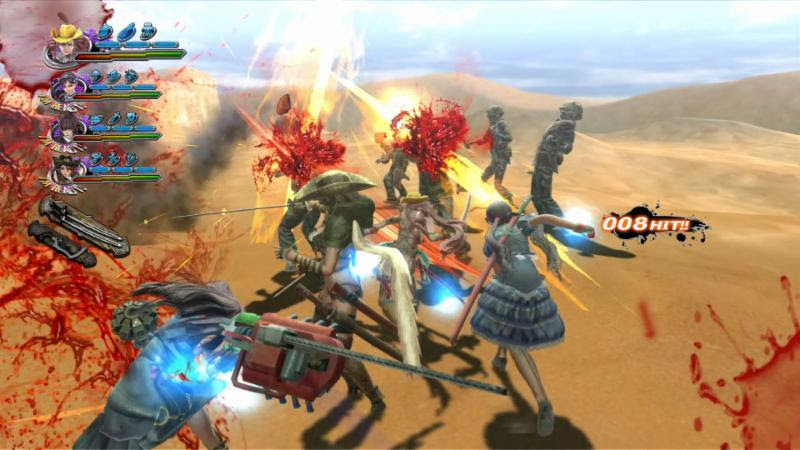 The tale and its accompanying dialogue may be silly and campy and a bit scatterbrained, for sure. However these traits allows the game to make its awesome, ridiculous “bikinis slay the undead” premise a triple combination of lighthearted, occasionally self-aware, and charmingly low-budget, characteristics that compliment a few hours of leisurely stupidity after a stressful day of deadlines or competitive diaper changing (if you’re a maniacally organized parent, you might be into that type of diversion). If you require a storyline that’s more cohesive, coherent, and thoughtful, however, then, well, you probably wouldn’t be interested in an adventure about bikini samurais to begin with.

If the story does happen to be too bare for expectations, then perhaps the combat will improve upon and make up for its impropriety. For as a masterful team of four – Kagura and Saaya, half-blood sisters from the Vampiric Clan; Aya and Saki, sisters of the Baneful Bloodline – you sprint from hallway to enemy horde, releasing whatever catharsis that may be harbored within with a variety of extravagant slices, punches, and special attacks that give the word “pandemonium” gainful employment.

Now, each character has a primary weapon, a secondary weapon, and sub weapon, all of which feel unique and can be accessed on the fly with the press of a button before, after, or in between any combo set you desire, allowing said combos to be pretty customizable in terms of attack order. 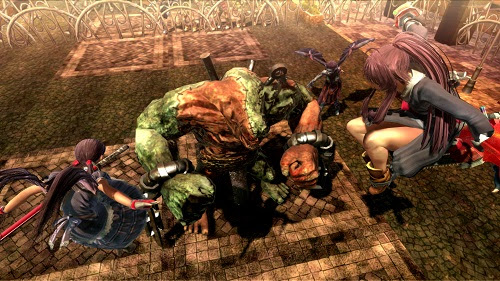 For example, you have the basic weak, strong, and sub-weapon attacks – which are assigned to square, triangle, and circle, respectively – and when executing a weak combo sequence, which consists of tapping square in succession, you have the freedom to change up this basic combo by adding a few strong and sub weapon attacks into the mix. And when you return to the weak combo, your attack continues from where it left off in the original sequence, whether it was on the third or tenth animation of said sequence before you initiated the change up. So, while the move list may not be expansive, the combat can be a joy to experiment with for the sake of challenging yourself amidst a blouse-ripping five-hundred hit combo.

Skirmishes become even more chaotic (hence the game’s title, I suppose) when character switching, team attacks, and special attacks are set loose into the battleground: Pressing up or down on the D-pad immediately switches characters; smashing the touch-pad like a dishonored sells-word unleashes all four girls, each one synchronized to your input, each swing of their weapons colorfully coursed by the girls’ unique auras at an unwavering 60 fps; and simultaneously pressing triangle and circle sets off each warriors’ one of three (12 in total once they’re all unlocked) special attacks, which range from Saaya’s crowd-controlling earthquake to Kagura’s ability to spawn a doppelganger that allows her to accrue double damage. This all goes without mentioning how each character can briefly transform into hyper-erotic Super Saiyans… But before I get too carried away with how delightful the combat can be, I must address a few of Z2: Chaos’ issues. Primarily, although the ladies’ character models are lovely and detailed, and the enemies are oddly designed yet distinguishable, the stages are embarrassingly barren, poor representations of the real-world locations they’re barely trying to parallel. Dubai, for instance, looks less like a metropolis stacked with ultramodern architecture and more like a colossus’ litter box, with its static sand dunes and – what the hell is that, a miniature Mayan temple?  On top of this, the stages suffer from length imbalances. One stage, or chapter, may take five minutes to complete, while a later chapter will take almost an hour. What this can do in a game that focuses on repeatedly punishing waves of enemies is add tedium to its formula by the end of the game’s 5 to 7 hour campaign. It’s not an issue for me, since I enjoy a good grind, but for some it could prove to feel more like labor than leisure by the time you reach the final stage.

Onechanbara Z2: Chaos has its issues. Although it has a nonsensical story (which I enjoy), level design from the deep yesteryears of virtual entertainment, and stages that vary so wildly in length that I forget the day of the week, Z2: Chaos’ combat nearly renders all of these calamitous flaws silent. It’s not the deepest, most intelligent, or most skill-intensive combat on the market. But it might be the most eccentric. And with the right mindset that’s willing to embrace the zaniness and work around the possible weaknesses, it can be just as fun as the best hack ‘n’ slashes around.