comments Share
You are reading
Ender of Fire – PS4 Review

Good old fantasy games are in a way making their way back into the limelight over the past few years. Male Warriors, Female Archers, and Male Wizards make up this almost holy trinity that has always seemed to just work. Taking this fantasy formula, XINESS has created an interesting fantasy world and set these classes into a Side-Scrolling Action Adventure that if nothing else, made me think of a much more serious toned Dragon’s Crown. 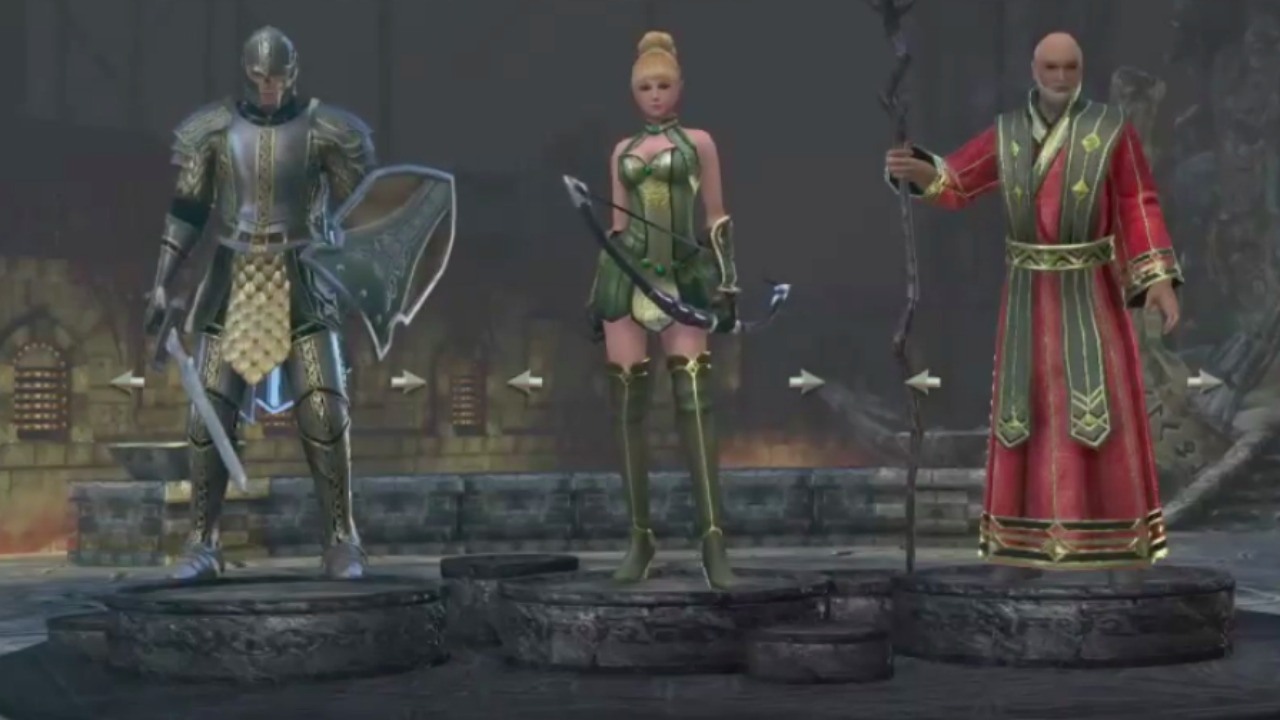 The three available classes within Ender of Fire are simple in name alone. The Warrior, Archer, and Wizard do exactly what you would think they do in regards to an overall playstyle, but the added depth to each was impressive when taking each out for a experimental “spin around the block” to find out which worked best for my personal playstyle.

The Warrior is equipped with a sword and shield that can withstand almost any hit when locking himself behind it. Being more than a sword and board however, our Warrior also has several attack abilities and party buffs that he can give out at just the right moment to turn the tide. The archer being much more ranged and mobile has a variety of different shots that she can perform to either lay low an incoming crowd or turn even the most fearsome of foes into a pincushion. Finally our Wizard is a master of the elements with the incredible destructive powers of Fire, Ice, and Electricity at his fingertips. Using his years of mastery he can either quickly shoot out his spells or hold onto them longer in order to cast some truly frightening displays of magic that leave nothing standing lest it be cased in ice.

Because skills and experience are sometimes not enough, each class has access to equipment that they can buy in order to increase their combative abilities to face off against the foes of The Old One. These options change for increasingly better equipment every fourth level granting players access to that current tier of weapons for three. Working in this manner it becomes a choice whether or not to buy them “now” or wait for that one next level up and accumulate just that little bit left missing to buy a truly great weapon until that next fourth level up. 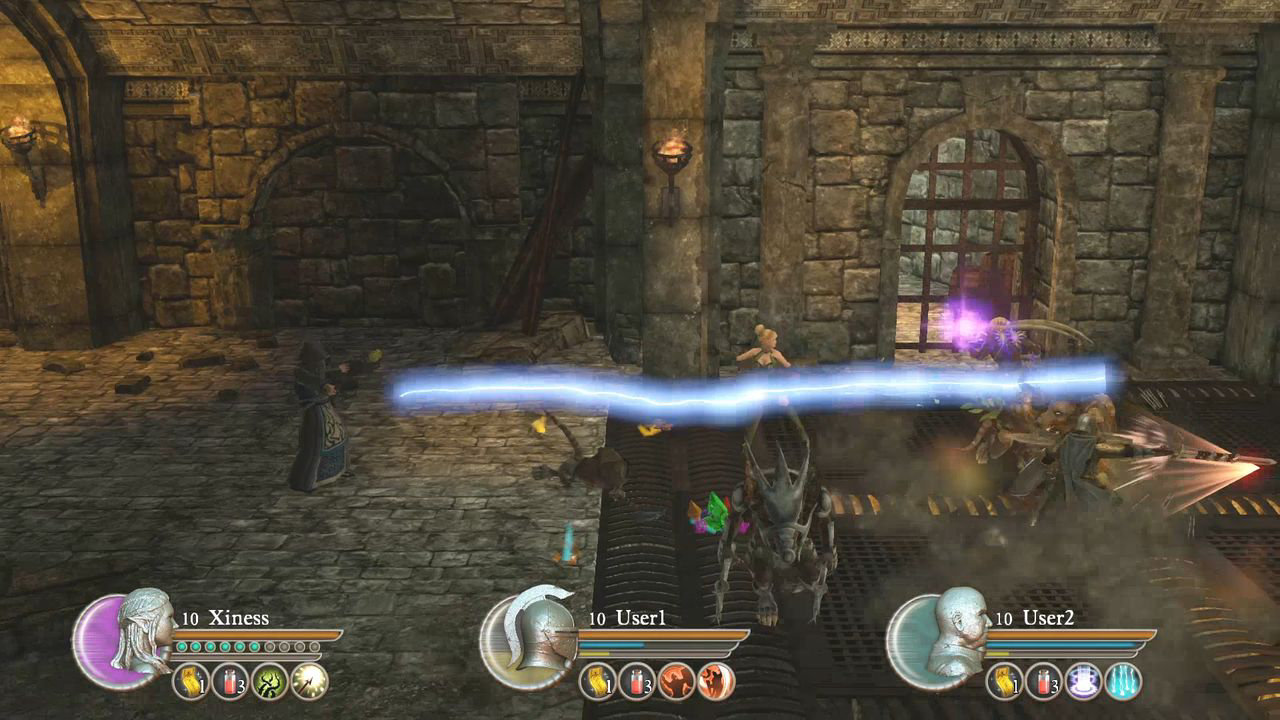 Starting off players have options. Visiting the core town that acts as your apothecary and blacksmith might be a good idea in order to see how much things cost because nothing is cheap. Having a bit of money to spend does help but it won’t be getting you a new shiny weapon at this stage of the game. That is something you need to work for! This town has lost its surrounding lands and castle to the Elders that serve The Old One. Making stuff and getting ingredients isn’t the cheapest and that’s why your band of adventurers is here, to remove the beast tribes and their leaders to regrant the peoples their land that was lost over the course of a previous war.

Once the exploration of this small area is complete, there are three other possibilities that are also open to explore. Actually you could even start with these as the town is really just a shop and go. The way that the map is formed allows for the party to go in any of three directions from the town which will take the party through three very different but all gorgeously designed and detailed environments. Tackle the castle? The desert? Or the graveyard? That is left up to you and the recommended level requirements vs your skill and adventuring mettle. Each zone and those unlocked afterwards all have their own themes both in appearance as well as in regards to the enemies to face off against.

Now while all of these sounds great, nothing has been done yet. Starting off at level 10 and not level 1 as we are already experienced and seasoned adventurers, taking sword and shield in hand, I lunged forward into the castle to battle the Orc and Goblin forces. This said, before going any further is where I have to make a statement. 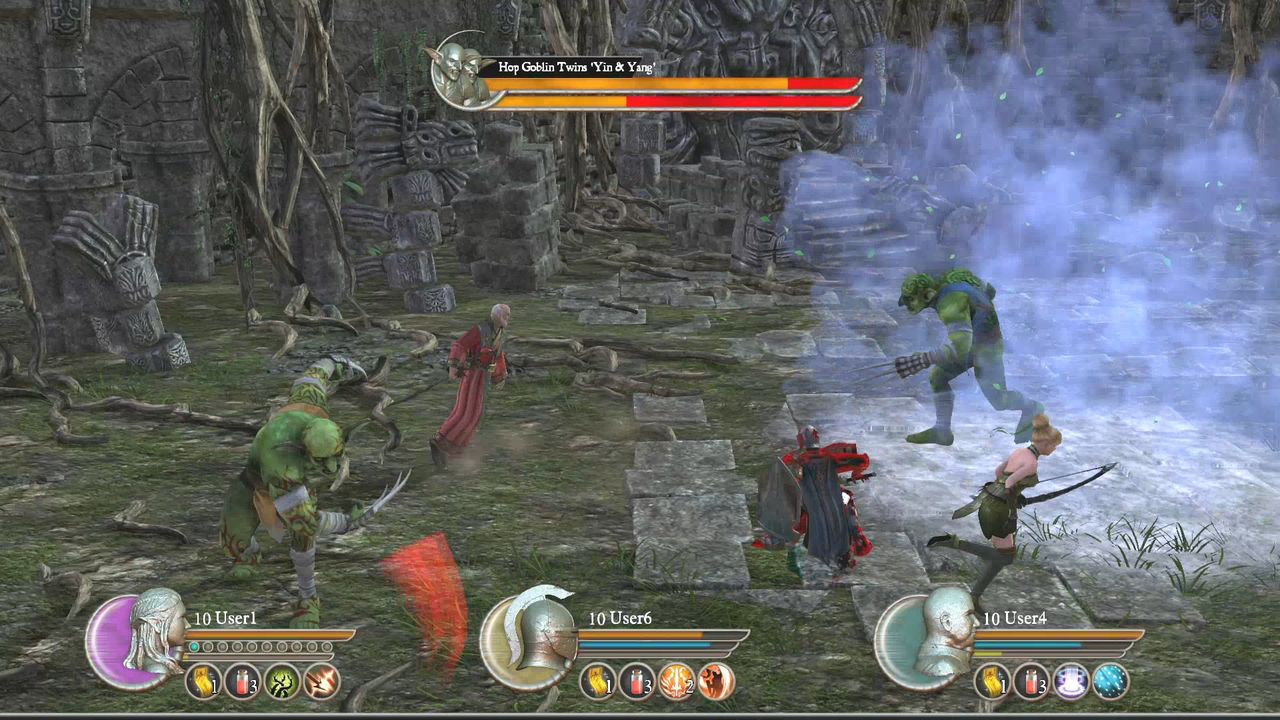 Ender of Fire is a good game, but it can be “quite” slow for some to start off.

It will take some time to get used to characters, and I’ve experimented with all three. Each one has a moveset completely different than the next. Do you hold on to the ability or do you let it go to dodge and not get hit? It isn’t until a few level ups have been gained that things pick up the pace in regards to a character’s base speed making everything much smoother and a lot more enjoyable. This is important because aside from newer weapons and leveling up which grants new armours automatically, known skills of each class will never change making the ease of getting used to that class that much easier as it keeps the same fundamentals from start to finish.

This is where things get a bit “iffy”. I’ve had the argument, no, I currently have an argument with my brother over a very specific topic. The argument, is pertinent to Ender of Flame because he originally started off playing it with me and Breanna and it goes as follows. Can a good to great game be such if it takes more than twenty minutes to get into? I’m going to exempt the entire 4X genre as it could take tens of hours to truly get into. I’ll be honest that it took a couple hours for me to really get into Ender of Flame where those higher levels finally granted me a speed boost smoothing everything over. But would you really wait that long if you didn’t know? My brother didn’t and missed out. Prior to that things felt slow and your character does feel underpowered near the beginning.

All that being said, while it is slow to start up, gameplay does become rather smooth and even intense at times when surrounded by unflinching enemies that are backed up by ranged ones. They use their advantages when they have them so do make sure to use yours as well to level the playing field. Instead of using lanes while continuously battling towards your goal, characters are allowed to freely move, run, and dodge around enemy attacks in the incredible looking environments. Sadly though, there are a lot of times where something looks awesome to go over and explore but it is really a dead end with an invisible wall and you have to continue moving moving along the straight path towards the end of the stage. With how amazing the details are it would have been awesome to see more to the stages or even sub routes instead of simply moving right towards the boss. 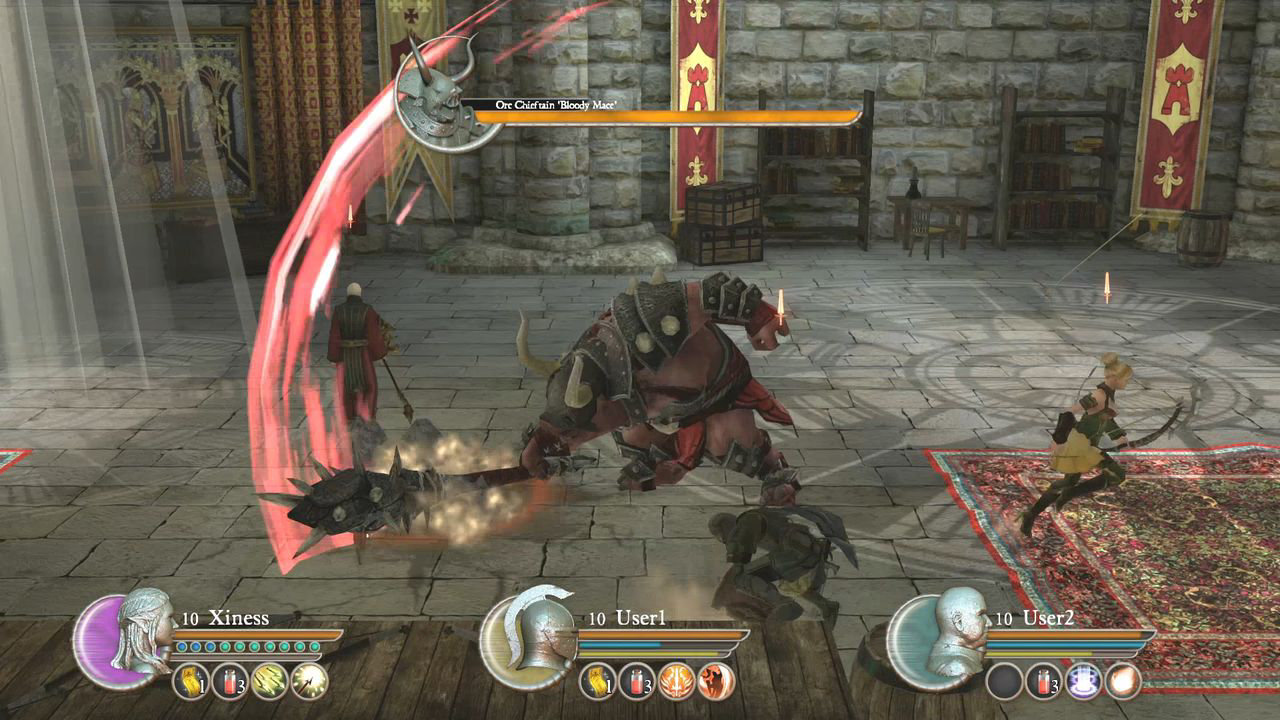 Where things could get a bit murky was when dealing with larger unflinching enemies that just laugh at you. For everything that Ender of Flame does right, it does have several issues that for some could get in the way of making everything truly that much greater. Unflinching enemies aren’t hard per say, but they can be extremely hard to take on when there are other enemies around. Not being able to stun, knock down, or even bowl over these hulking masses of destructions to your health bar can be rather frustrating even on their own. Going in for more than two hits can sometimes cause a decent amount of pain because there is no time to dodge or block an attack. Add in Orcs with bombs, Skeletons and Goblins with arrows, and you become the above mentioned pin cushion. As your character’s level increases this becomes less of an issue but near the beginning? It was really getting in the way and turning what should have been enjoying into something more like a chore instead of being fun.

Items are the other thing that can really destroy a good run as they felt hit and miss. In certain cases I came to realize that they shouldn’t be used at all. One such case is being thrown down to the ground by a large enemy or boss. Trying to drink a potion in this situation was simply a waste which of course was in the worst possible moment because it was the difference between life and death. For some reason while being affected by a status effect or as mentioned being thrown onto the ground, healing potions simply did not work. This persisted the entire length of the game sadly even up against the final boss. Using a different format for this fight there was a point in which I tried to heal and nothing happened. Without healing potions I was glad that the resurrection tickets were under a menu that asked if you wanted to use it or not as it was sometimes more effective than trying to heal and wasting the item. Preventive poison cocktails also fell into this category. Buying vials of poison protection that work for a  total for three minutes also didn’t seem to work as I would simply be poisoned anyways. In the end I relied much less on items and a lot more on skill to keep me alive. Yes that should be a standard but sometimes that health potion makes all of the difference! 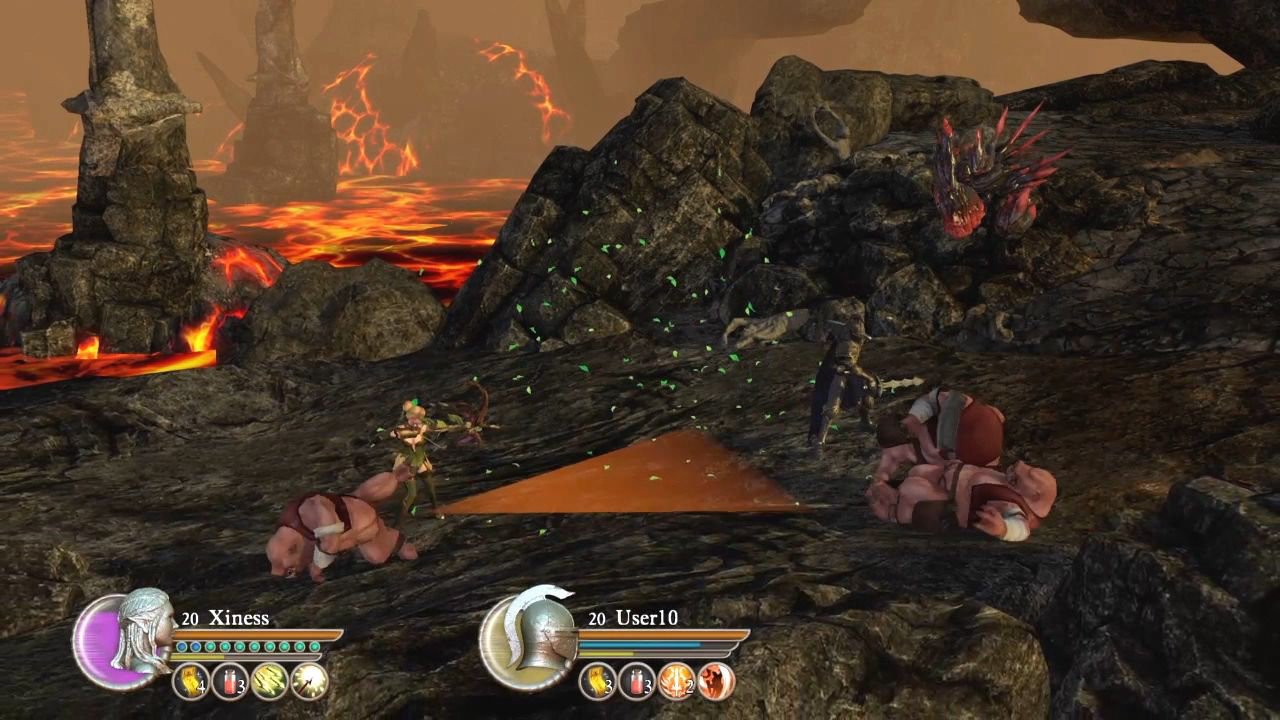 Ender of Flame is not an overly long game. After only several hours I went up against the final boss and that was the end of it. Quite literally. Once the final boss has been defeated the credits roll and then there is honestly nothing left to do. Players have access to both normal and hard modes for the stages from the beginning and didn’t honestly seem to be any obvious differences other than the enemy strength which after leveling up still didn’t show that much. There is no new game plus and there are no new paths that open up either. I was a bit disappointed by this as normally Side Scrollers offer up newer challenges once the principle one has been achieved.

Short of the items issues and the length, I did enjoy Ender of Flame. While short without a replay leading to anything new, it was still a good experience that lasted several hours both solo and in coop. Each location, while not fully explorable, was incredible to look at with great designs of both environments and enemies alike. XINESS really hit it out of the park in the visual design department. The only issue stopping me from going back for more is that once beaten, there is no incentive to continue on as there is nothing left to do short of getting the PSN trophies. I would honestly love to see a patch to fix issues and maybe just an implementation of a NG+, new paths, or new stages added further on because Ender of Flame could become that much better with just a little bit of extra polish!