comments Share
You are reading
Guild of Dungeoneering – PC Review

Guild of Dungeoneering is an amazing game.  Go buy it now, and then finish reading this while it downloads and installs.  Ready now?  Great!  You may continue. 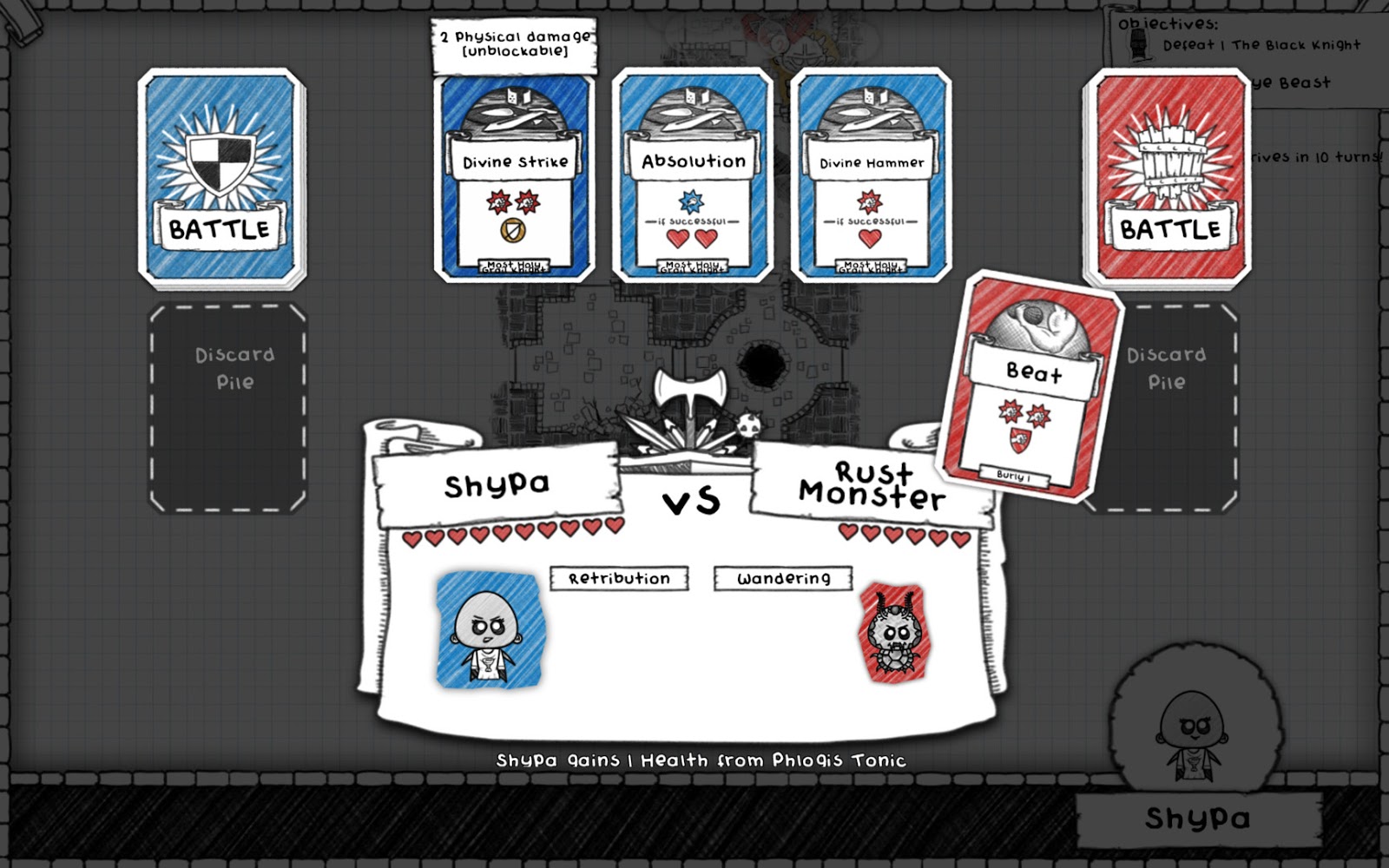 You, the guildmaster, have just been shunned by the world’s premiere adventurer guild of dungeon crawlers and have opted instead to just start your own guild with the sole purpose of showing those snobs up.  It starts with a very guttersnipe feel, as you start off on the bottom of the food chain attracting the very lowest caliber of adventurer to your guild.  It isn’t until you use hard-earned gold to upgrade your establishment that you will begin to have some worthwhile classes to invite along for the ride, but while the chump lacks any distinct advantages, he is still more than capable of pulling off the beginner dungeons, with a bit of luck and perseverance.

Luck and perseverance are the two primary requirements to win in a roguelike, and they hold just as true in this game too.  Instead of controlling your character, though, you instead draw a handful of cards to place.  These can be dungeon tiles, which add new pathways to the blank page of the dungeon world; treasure, which can help to lure your adventurer away from the scary thing he thinks he’s about to go beat up on; or even other monsters.  Why would you want to ADD monsters to the dungeon?  Well, at the end of every successful fight, you get to choose an item to equip, which will, in most cases, improve your character and give your snowball an icy coating before you chuck it into hell. 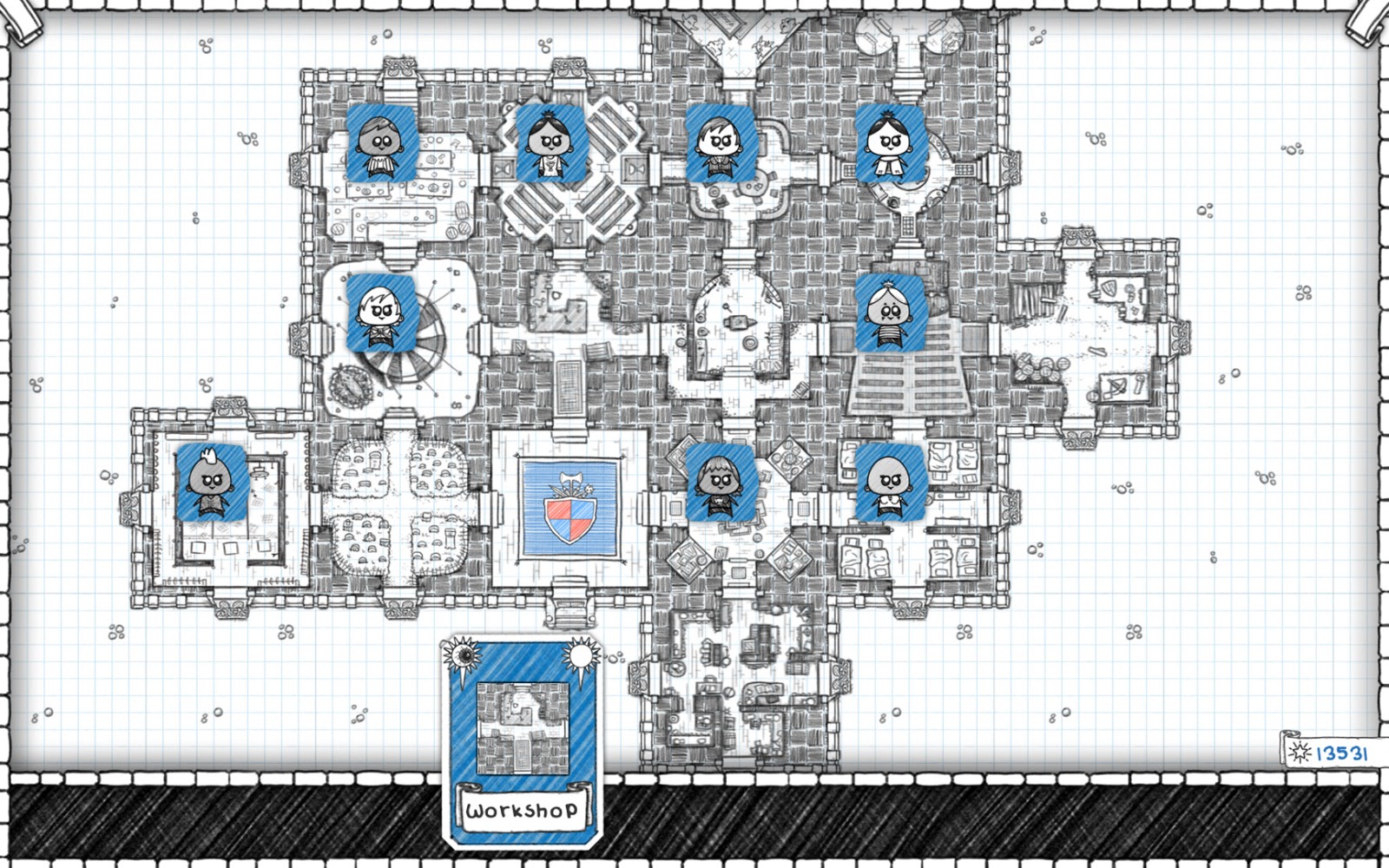 Using money and monsters to drive a knuckledragger isn’t an exact science, though.  In fact, I often felt like the (N)PC was intentionally obtuse and difficult to manipulate, as he never ever seemed to follow the same rationale as I did in terms of which route he should take through a dungeon.

Combat itself feels like Magic: the Gathering meets Rock Paper Scissors.  It’s a very simple combat system with only two types of damage, physical and magical; a block for each type (or for ‘either’ type); a quick-attack, which will allow you to strike and resolve damage prior to your opponent; drawing extra cards; forcing your opponent to discard cards; or recovering health.  It’s just complex enough to make it engaging, without needing a 30 page booklet inside every starter pack.

This game takes some pointers from it’s roguelike forefathers in that it is hard.  Even if you do absolutely everything perfectly, there is still a very solid chance that you will die a horribly painful death at the hand of a goblin with a rusty spoon, just because of a very bad run of luck. 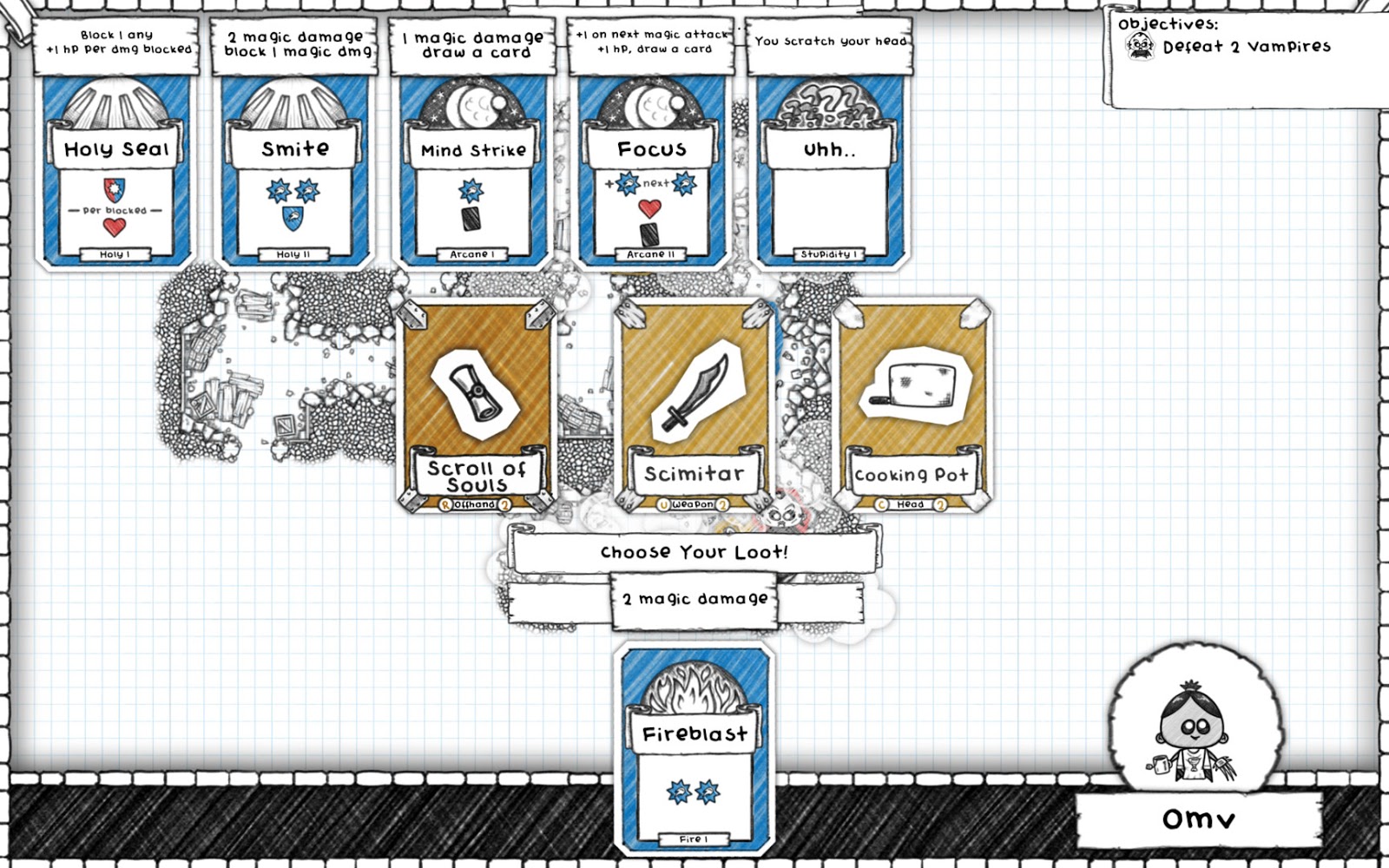 Each fight is a microcosm unto itself, in that your health always starts at full, all of your used cards are restored, but don’t take that to mean that it will be simple.  You have next to no health at almost all times for almost all classes, and as a result, there are some interesting balance implications where the defensive class actually becomes the most powerful class in the early-game, simply because of his propensity to not die, and slowly whittle away at the foe’s health while maintaining his own.

If you close your eyes and listen to the music, you’ll forget where you are and think you’re at a renaissance fair with a halfway decent minstrel strumming next to your ear.  This is both good and bad, as it suits the tone of the game, but it still begs to be silenced/turned off after the first hour.