“Rick is the name, danger is the game”. No, this cheesy line is not what the protagonist of this action/adventure says but it describes what he does: getting involved in extremely dangerous situations. At the beginning of the first stage, after you make a few steps a giant boulder threatens to squash you. So, you run forward and fall in a pit with the rock just above your head and almost land on an angry tribe member, who gets squashed instead of you! What follows is worse. 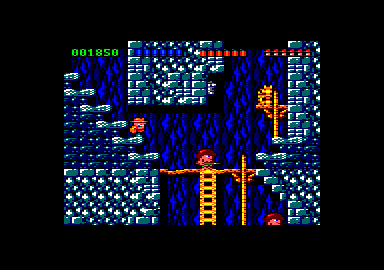 Hidden traps scattered around, spikes, projectiles tossed from the walls, gaps and enemies patrolling every place are obstacles that will steal your lives repeatedly. However, the game is incredibly addictive and I tried very hard to reach the last stage. There, unfortunately, I quitted. The reason is the lack of a save or password system, so when you lose your lives you must start all over again. After playing the first stages dozens of times I was tired and lost the will to continue.

Still, it was fun while it lasted thanks to the ingenious level design. It is impossible to avoid the traps the first time you cross an area, for example as you walk a spike comes out of the ground and kills you instantly. However, with practice you learn how to avoid them or trigger them harmlessly. You have a pistol but this is not a shooter. Whenever possible you should conserve your ammo because there are only a few crates with supplies. The puzzles are not complex, nevertheless, you have to move very carefully (there is no time limit, thankfully) and observe everything. You may notice some barely visible marks on the wall for example, which show you can climb on it. You will also need to remember how enemies behave in order to deal with them effectively. I like the fact you can use bombs to destroy objects blocking your way, such as rocks, or send an opponent to the afterlife. 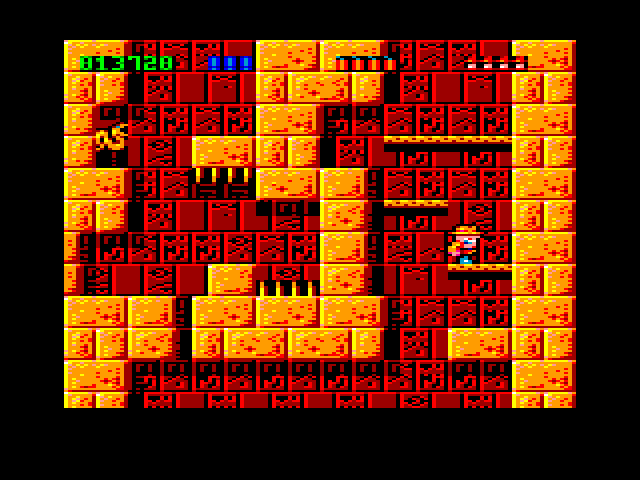 The enemy sprites are cute and the graphics set the mood for exploration, whether you are in a huge pyramid, a castle or a strange place in the Amazon (a cave perhaps?). Details such as sarcophaguses, a falling portcullis or stacks of missiles prevent the locations from looking bland. Flip-screen is employed instead of scrolling but this isn’t a problem in a game of this type.

There is no music, however I liked the sound of Rick’s footsteps, bombs exploding and enemies yelling (if you can call it yelling) after they die. In fact, the silence adds to the atmosphere.

The control is simple and extremely accurate. You can walk, climb a ladder, jump and control your movement while in mid-air. Crouching is necessary for passing through narrow spaces or avoiding some projectiles. You may also fire your gun, place a bomb (it explodes after a couple of seconds) or stun temporarily someone with your stick. You need pixel perfect movement to survive and the control allows you to do it.

Rick Dangerous is the best Amstrad game I never completed and I regret not being more patient with it. After all, I had already seen most of it and was close to the end (it only has four stages). I easily consider it one of the smartest and most addictive action/adventure games I have played. 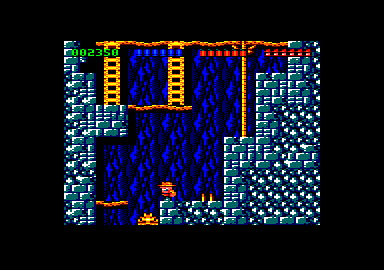