Armello has the potential to be remembered as a daring mixture of board game and video game. Clearly there were chances taken, but the design holds up and the game is enthralling – especially with friends. Not everything worked as well as it could have, but for those of us who like board games but do not want to hassle with rule management, Armello might be the perfect solution. 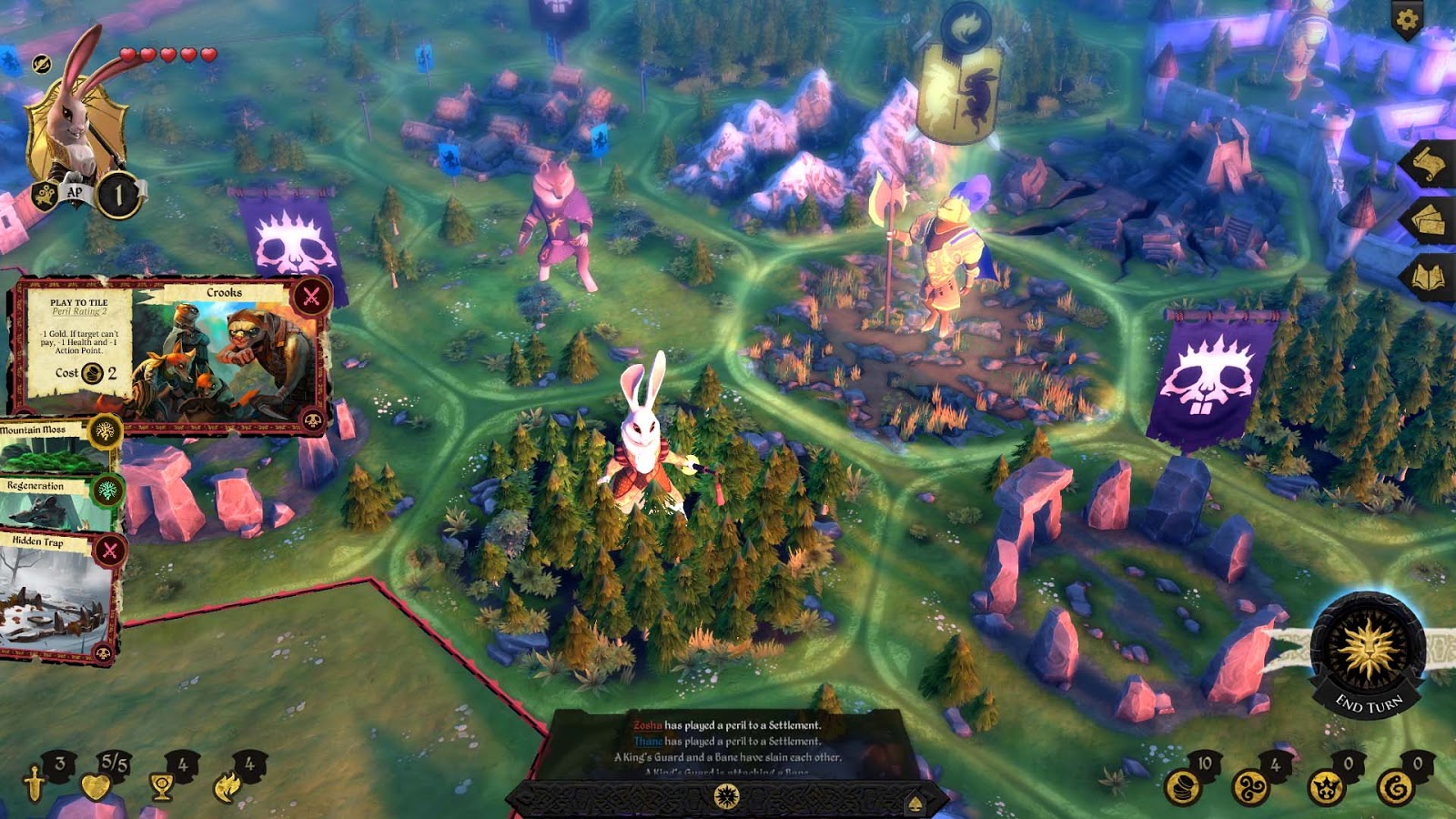 In a way, Armello reminds me a bit of Golem Arcana, a board game that Nick and I played quite a bit when we reviewed it. At the time we were amazed as how well it blended video games with the tabletop experience. You had these tactile, 3D creatures you could move around an actual board. Yet you used the stylus to read the creatures and terrain. It tracks your movements and does the math behind the scenes.

Armello has some parallels to this. While they are wildly different games both in form and function, they attempt to marry the best parts of both hobbies into one experience. As cool as the characters in Golem Arcana look, they do not compare with the lush graphics found within Armello. The landscape is absolutely beautiful, with watercolor hues, stone circles and forests, while animated half-animal/half-human creatures stalk one another across the playing surface. The playing field is a series of hex grids, each hex containing its own space. Many of them are simply terrain to be traversed, while others are key points of interest. 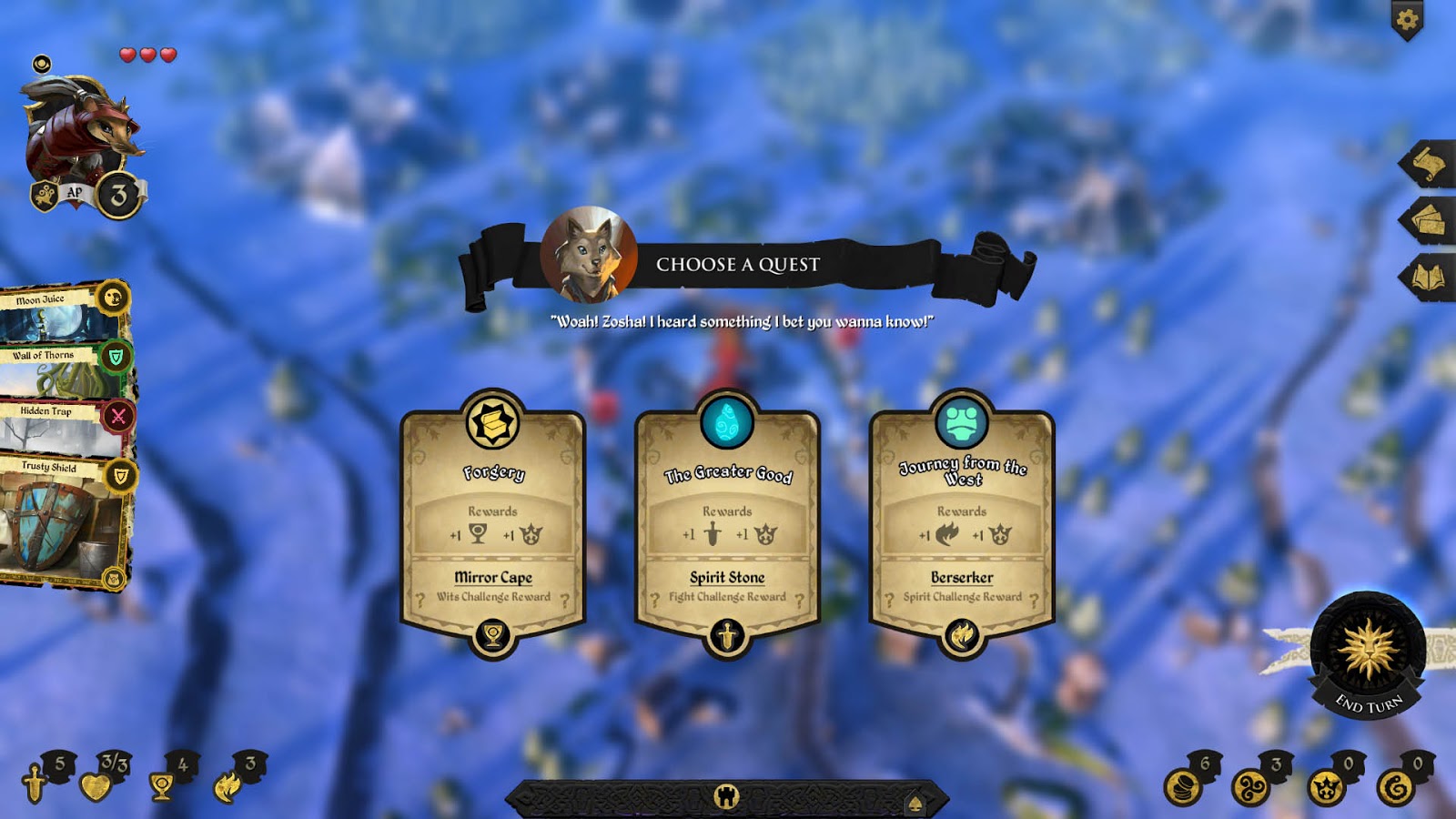 Armello tells the story of a fantasy world where an illness called the Rot has threatened the land and infected the king. Now the rival clans see an opportunity to act as they compete against one another to become the new lords of the land. Each of these different races has its own unique characteristics, but despite this needed variety, all of them felt fair and balanced in my time with the game. Like the landscapes, these characters are beautifully rendered and animate well, both on the battlefield and when they engage in combat.

Combat, like so many of the game’s mechanics, seems harder than it actually is at first. There is a lot of terminology thrown around, and Armello has several different aspects to its gameplay. While there is a strategic element wrapped around character placement and movement on the map, there is also a card game at the heart of your actions. You can use these earned cards to cast spells or boost your character in some way before combat. Then when it is time to throw down, the characters roll dice against one another. These dice amount to swinging and blocking – so the more dice you have at your disposal, the better. The dice rolling and card collection aspects certainly harken to the tabletop experience. The team is quite proud of their dice rolling component, as evidenced by this line on their Steam page:

– True Tabletop Feel – We spent months making sure we cherry-picked the best parts of the tabletop experience, like our custom physics-based dice! 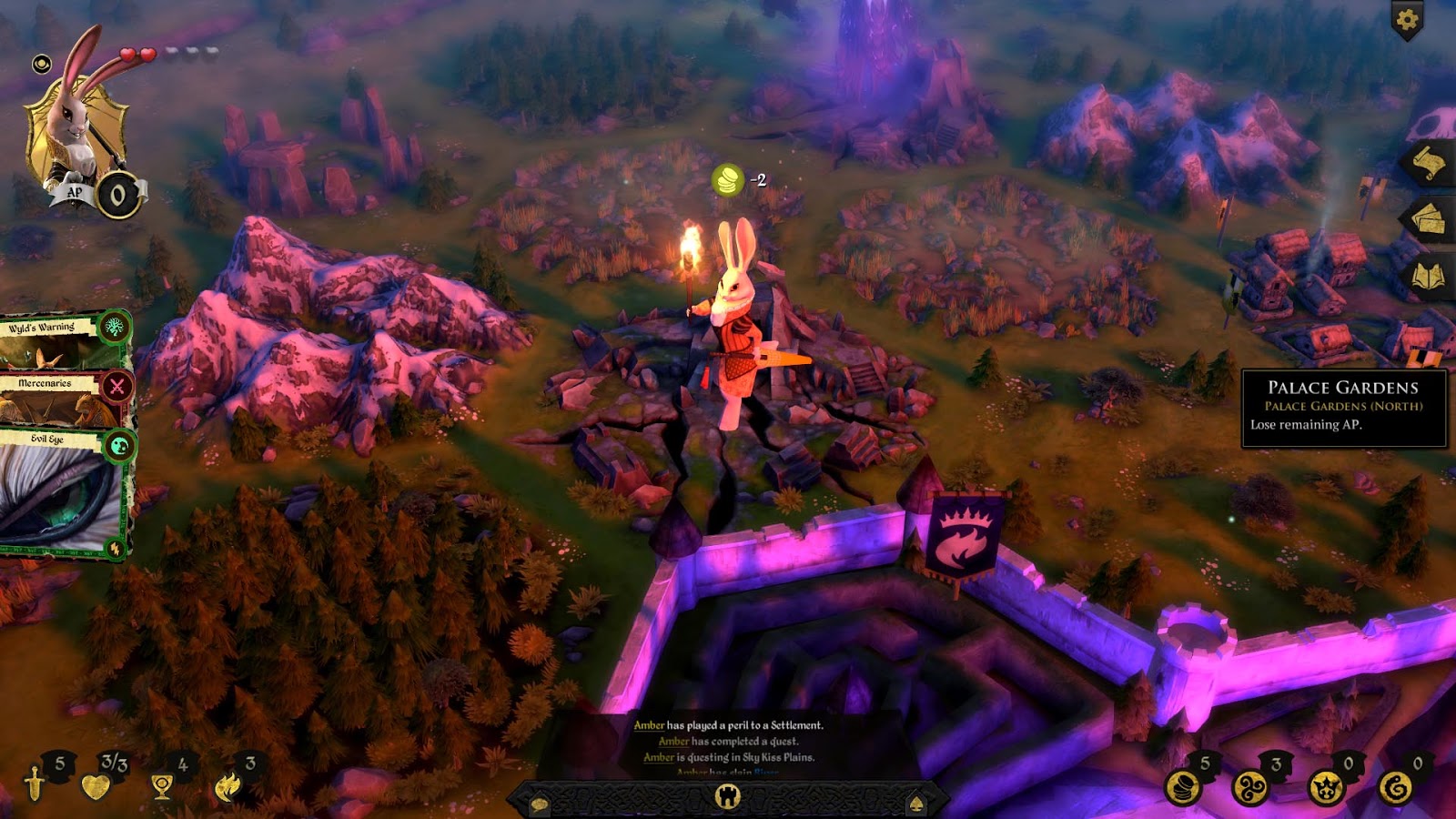 Kind of an odd remark to make, but in truth the roll and clatter of the dice is satisfying. More important to Armello’s success is not how the tabletop experience is leveraged, but the video game side of the house. Doing the calculations quickly in combat, figuring out how an attack spell is going to impact a character, keeping track of the dynamic quests and maps (the maps spin up differently every game) and managing the day/night cycles are all aspects of Armello that lend it a great deal of character, and would be a bit of a pain to manage in a board game.

So not only do we see a quality music and graphics, but a smoothed out player experience as well. The actual game pits characters against one another, each one trying to lay claim to the throne. While the characters themselves are visually cute and cuddly, the tactics at play during the game are downright cutthroat at times. There are a handful of different win conditions, and you spend as much time trying to progress your character to meet one of those criteria as you do knocking your opponents down a peg to keep them from building up too much of a head of steam.

The biggest concern I have about Armello is how long the game can take to play out turns. I understand that with a game system this complex, there is a lot of computation that has to occur on the back end. Still, if you play the game against three AI opponents, that particular session could take a while to complete. Playing with others is a more entertaining option, but I struggled to find good games to jump into with other players at times. Here is one of the decided benefits and curses to the board game experience in digital format: in theory you simply have to hop online and find a game, but reality is it might just be quicker to call your friends over instead. 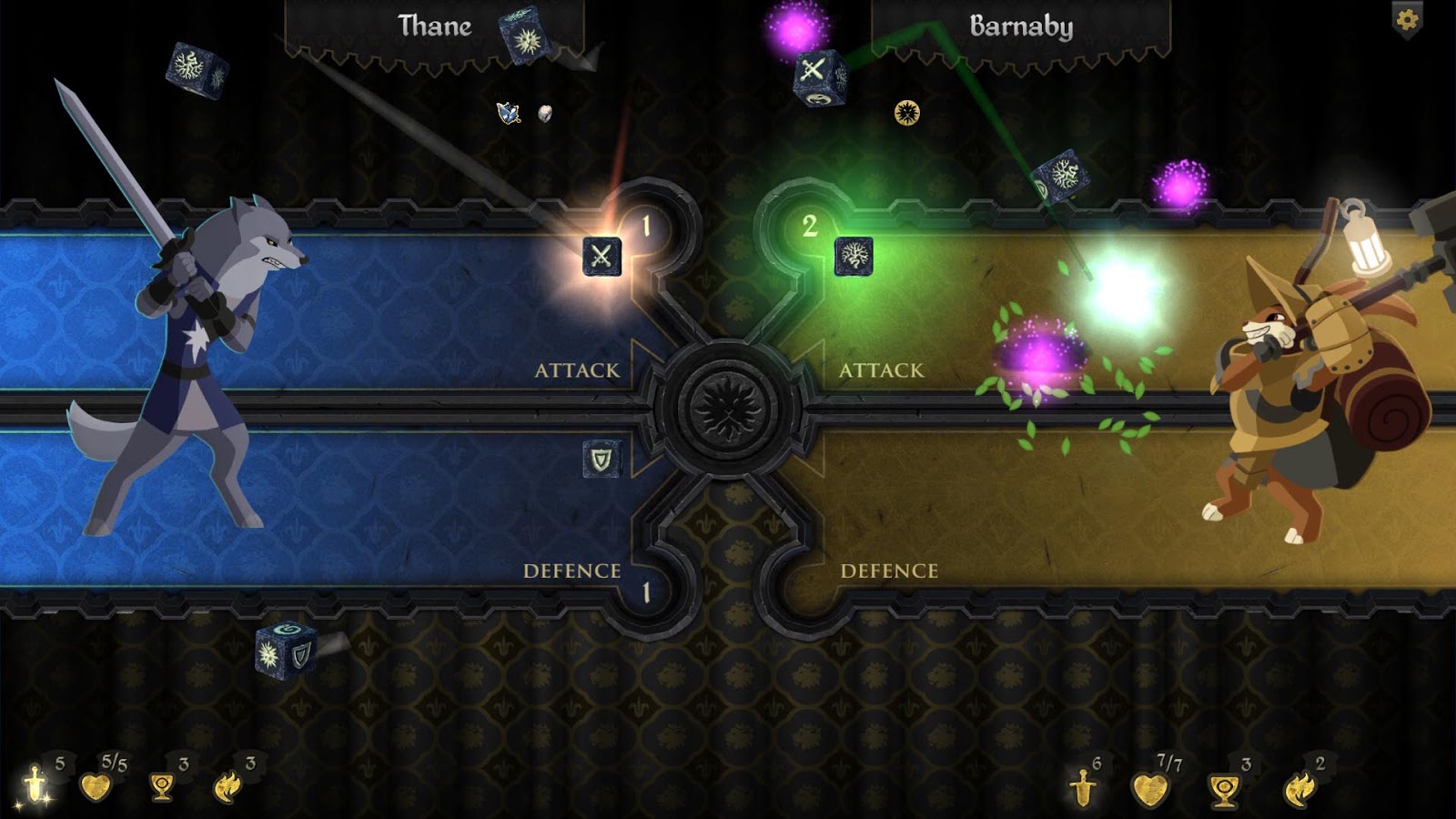 Armello is also a tough nut to crack in terms of learning the game. It is great that the computer can manage a lot of the book keeping aspects for you, but there are a lot of rules and options. The tutorial is good, and holds your hand through about the first two and a half modules before leaving you somewhat more to your own devices in the third of the four scenarios. Anyone hoping to jump right in and play will likely come away disappointed. Like an involved tabletop strategy game, you may have to spend an hour or so learning the game properly.

One last small complaint is that there is a lot of text. No, I’m not against reading, but the font size is quite small. It is like my recent experience playing Nobunaga’s Ambition as well. Another fantastic strategy game, but there is so much text and it is relatively small as it gets packed onto the television screen. Like that game, I suspect Armello would make easier reading on a closer PC monitor than an actual television at times.

Those quibbles aside, Armello is a lot of fun and does a commendable job of blending board/card games with video games to create a unique gaming experience. It is easy to invest a dozen hours or more into the game, and because of the multiple objectives and the dynamic board and quests, feel like you are getting a fresh experience each time.