comments Share
You are reading
Broken Sword: Shadow of the Templars – Retro Reflections

In Broken Sword: Shadow of the Templars you play as George Stobbart, an American tourist who gets involved in an international conspiracy after a murder takes place in front of his eyes in Paris. The conspiracy has to do with two opposing, powerful organizations dating back to the Medieval Times. One of them is the monastic order of the Knights Templar, who were convicted by the Inquisition and executed brutally. The other is the Assassins, a group of devoted, highly effective killers from the Middle East. Thankfully, you are not alone in this endeavor· a young French photojournalist, Nico, is interested in the case and helps you. 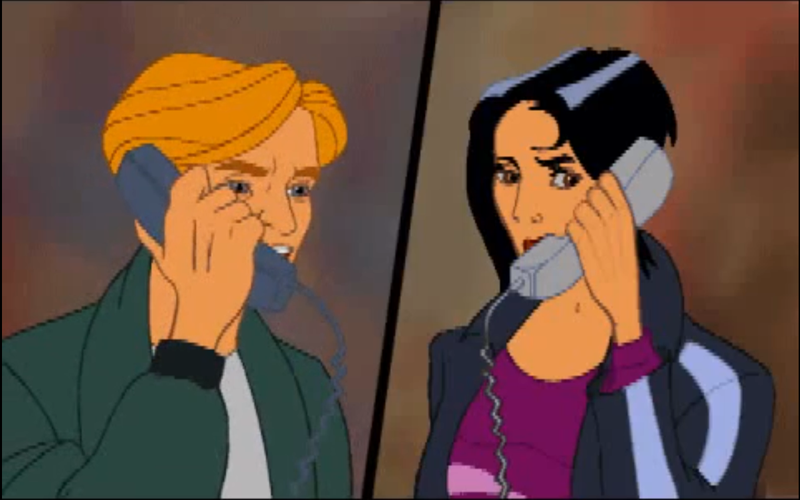 During the game you visit several areas in Paris, talk to many people, collect objects and, of course, solve puzzles. The plot is rich and full of mystery. At first, you have no idea who the victim was but gradually you learn more and become deeply involved in an affair with grave consequences. Soon, you need to leave Paris and travel to other countries, never knowing what to expect. Especially when you discover locations built by the Templars you feel you participate in a historical adventure. I love how the script combines humor -for example jokes for the police or doctors-, drama and thriller. The story stays consistent and has a unique style.

Characters have different personalities and all dialogues are detailed and enjoyable. You meet, among others, a humorous construction worker, a weird police detective, a kind priest, a solemn countess, a high-spirited taxi driver and a smart kid who sells stuff. If you ask someone about one of the objects you are carrying he/she will make a comment and each character has a different comment. There are dozens of lines just for your inventory! 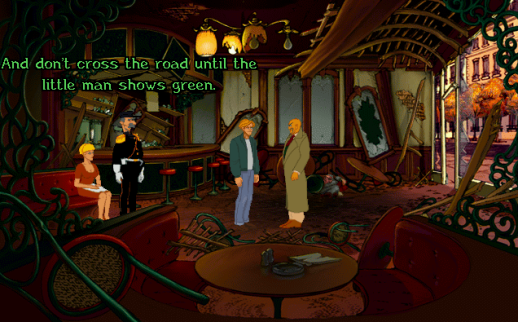 The puzzles are very smart. Occasionally you must try everything on everything (for example, to sabotage the water supply in the Spanish villa) and there is one in particular that changes the game rules (the way you avoid the maniac goat). However, almost all of them can be solved without a problem if you observe the environment, discuss with everyone thoroughly and think reasonably. Thankfully, each scene has the items you need to solve its puzzles, so you won’t have to go back to previous screens and search for an item you missed. There are also a few instances where you get killed unless you do the right choice quickly. Causing diversions to avoid unfriendly characters or using objects left by the Templars to reveal new clues are my preferred puzzles. The most memorable moment was meeting the assassin on top of a cliff.

The graphics are marvelous. The 2-d scenery is drawn with style, beautiful colors and plenty of details such as furniture, plants and decorative objects. Every place is unique, whether it is a hotel, a hospital or a medieval mausoleum near the sea, and the characters have good animation. Also, the illusion of depth is created by the fact that sprites become gradually larger as they walk to the front of the screen and the use of foregrounds, e.g. sacks of merchandise in the Syrian market or dark trees and gravestones in the cemetery. 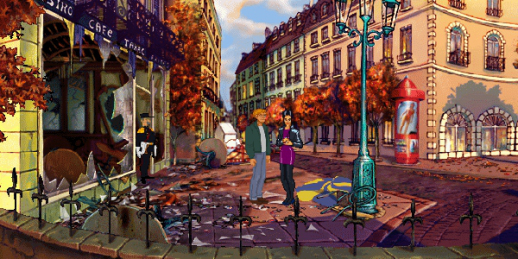 The music is pleasant and changes when you talk to Nico or make a discovery, for example when you climb onto a castle wall in Ireland. The singing in the middle-eastern club is entertaining and the introduction in Paris is memorable. All dialogues are accompanied by voices and the actors/actresses perform well although sometimes the same person plays different characters.

The control is simple and intuitive. You move a cursor with the mouse and it changes depending on the action you can perform. The magnifying glass prompts you to examine something and perhaps interact with it. The mouth shows you can talk to a character and the cogs mean you may use an object, such as a mechanism that opens a door. Lastly, there are three hand icons, for using an entrance/exit, for picking up items and for walking further. Some objects in the inventory can be combined together and right-clicking on the environment or a character gives you a more detailed description. In fact, I could not solve a puzzle because I thought only the left mouse button is used (how smart!). When you talk to someone you see icons instead of lines of words. Each of them is drawn in such a way that you understand easily what it is about, for example you ask about a specific person. 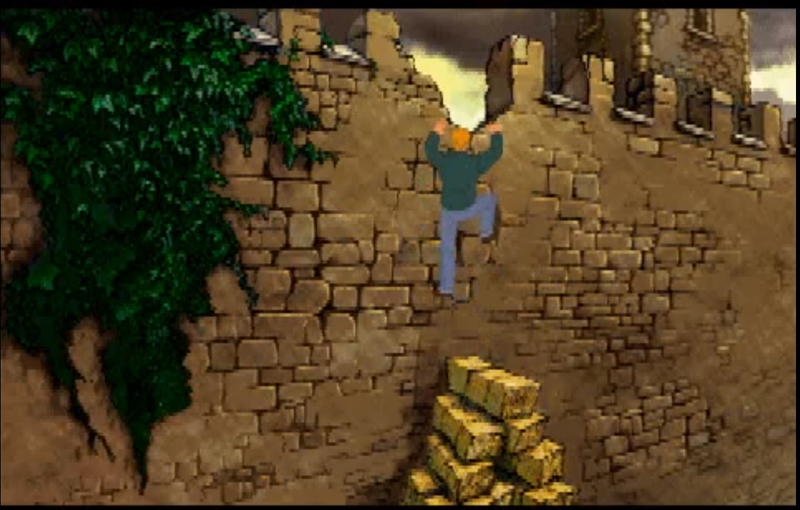 My only complaint is the ending. You expect something bigger and better but you get a stage with three screens, no characters to talk to and one puzzle. I didn’t even understand what the broken sword was. It’s as if the programmers suddenly run out of time. After the credits roll you are informed of a planned sequel, so perhaps the creative team started working on it and wrapped up the game quickly.

Broken Sword is challenging but not brain damaging. Of course, some puzzles are harder or need a bit of luck. However, I enjoyed solving them and most times I did it fairly quickly. I would like to mention that I first finished Broken Sword on the PlayStation using a gamepad instead of a mouse. That was many years ago. I tried it on the PC recently and completed it again in a few days although I didn’t remember the puzzles.

Broken Sword: Shadow of the Templars is a wonderful game. There are still companies producing old-school adventures but it is difficult to reach such levels of excellence. Fans of the genre should not miss it. 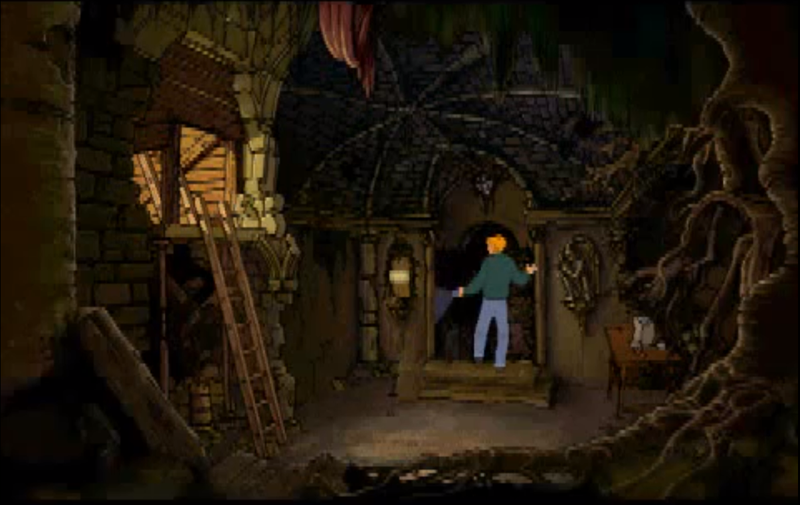