comments Share
You are reading
Cross of the Dutchman – PC Review

Art forms often enough take inspiration from reality in order to construct something special. Cross of the Dutchman from Triangle Studios is one such title that takes pages out of the history books in order to tell a tale of a man’s life that is shrouded in legends. Having started a rebellion in order to fight back the Saxons that would otherwise subjugate them all, players will get to experience the early days of Pier Gerlofs Donia in an Action Adventure format with great dialog and a smooth gameplay system. 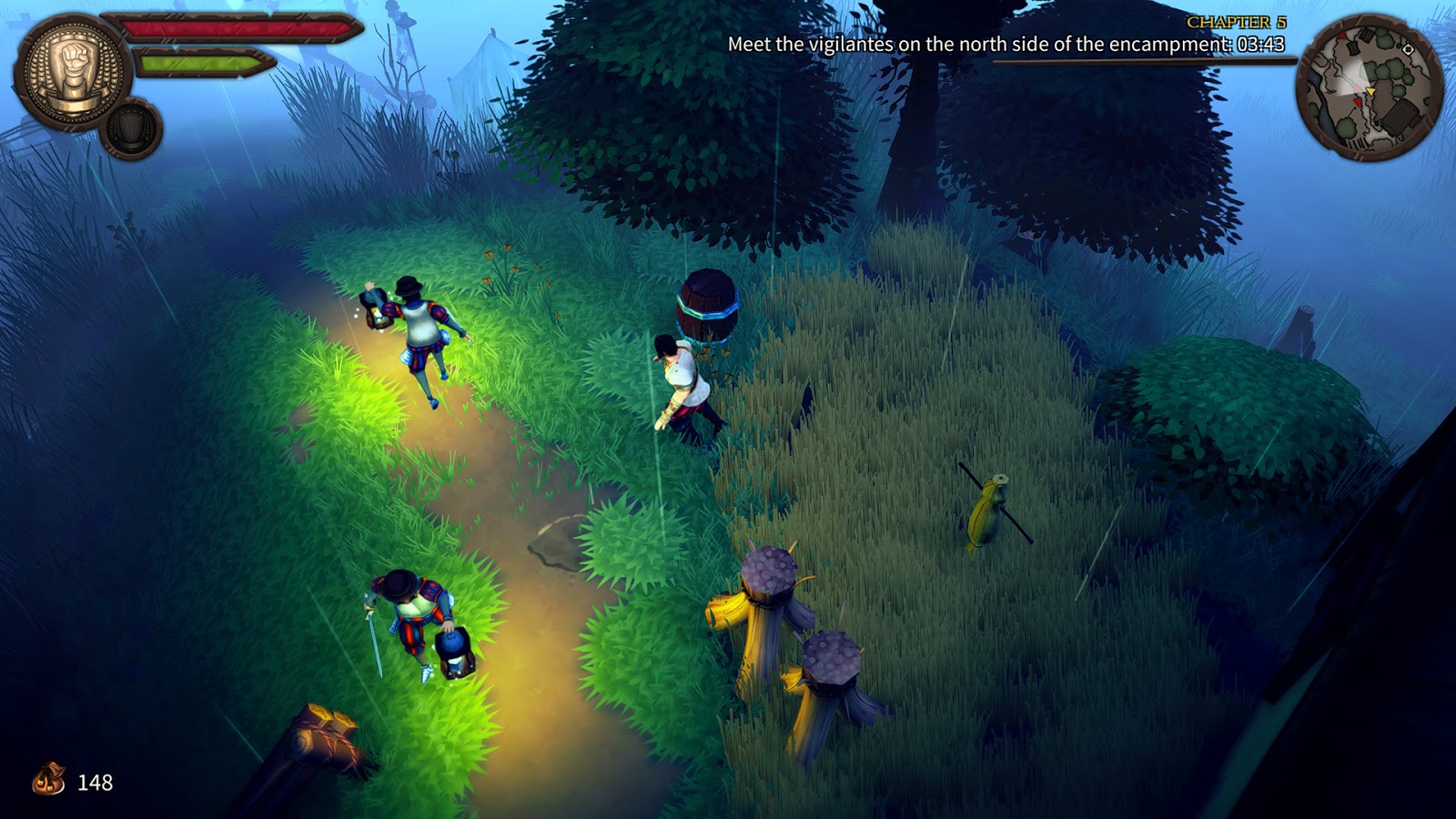 One thing that I want to quickly get out there before saying anything else is that Cross of the Dutchman is short clocking in around two hours. In some ways this could be the only complaint as this interesting tale ends somewhat before it really begins as things just start to really get good once the credits roll. This being said, in regards to gameplay it never actually feels that short with the multitude of events that occur over the course of the tale marking Cross of the Dutchman as well built experience that does what it sets out to do without compromising anything in the meantime.

Being an Action Adventure title, Pier will spend a decent amount of time running around as well as swinging his big mighty fists before being given a blade worthy of his size and strength. The areas to explore consist of four locations that are bound by a central point known as the Crossroads creating a nice area that is easy to move around in and feels unified. Attached to central point are two towns and Pier’s farm that will be re-visited on many occasions however under many separate circumstances. Re-using the same locations over and over never gets old as one would expect as there is always something just a bit different happening which could open up or block off paths creating new ones to travel under different circumstances. Sometimes though, Pier gets a bit rough on the blockades which is where his fists and steel come in handy.

Combat is simple yet challenging in the way that Pier will have to handle himself if he is to survive his various encounters with those that carry some rather sharp looking objects. Things are simple in the way that generally one punch or sword slash will knock a Saxon down so hard that they become one with the dirt which is more than satisfying. If they so happen to have armor, then two or three blows will send them flying in the same direction as those without it. Regardless of the case, that’s only one Saxon Soldier. There are times in which twenty to thirty Saxons will be on the menu and the dish of the day may not be enough to satisfy them all. That’s where upgrades and new abilities come into play with more flavors to satisfy everyone in the quickest manner possible. 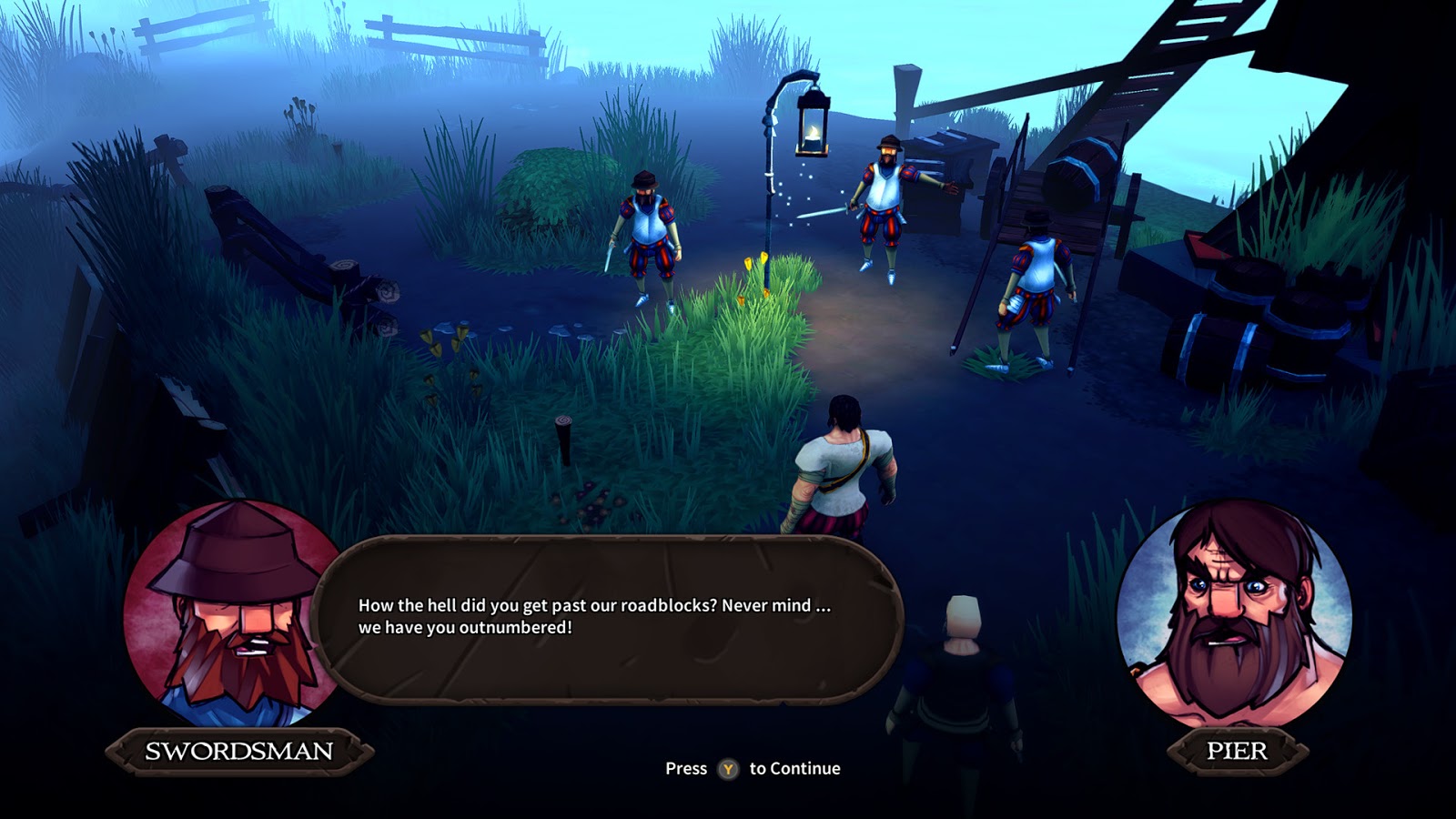 Because being a hulking beast of a man with incredible strength is not enough at times to avoid that pesky game over screen, upgrades are available for health, stamina, and some new moves to help in combat. Between the few available locations that can be visited, vendors are present in order to sell the upgrades which teach our hero new tricks in order to give it to the Saxons. With two upgrades for health and stamina followed by three new moves to be used with either Pier’s sword or his fists, there is enough enhancement to feel just right for the length that was chosen as never does it feel like too much as Pier already stands a full head taller than any man and his biceps alone could crush housing struts. He’s strong, but thankfully the upgrades teach how to use this strength to its full advantage!

Just because Pier is inciting a rebellion and fighting off hordes of Saxons it doesn’t mean that dialog is taking a back seat to the action. For the length of the adventure there are a fair amount of people that come into play whether for a moments notice or for a fair duration as you come to know them a bit better while fighting side by side. Whether in the heat of the moment, light banter with his wife, or threatening to remove the life of the person standing before him in cold calculation at their brazen disrespect and stupidity, Cross of the Dutchman excels at making characters lovable, detestable, and above all else believable with the well written dialog that only helps to support the action. 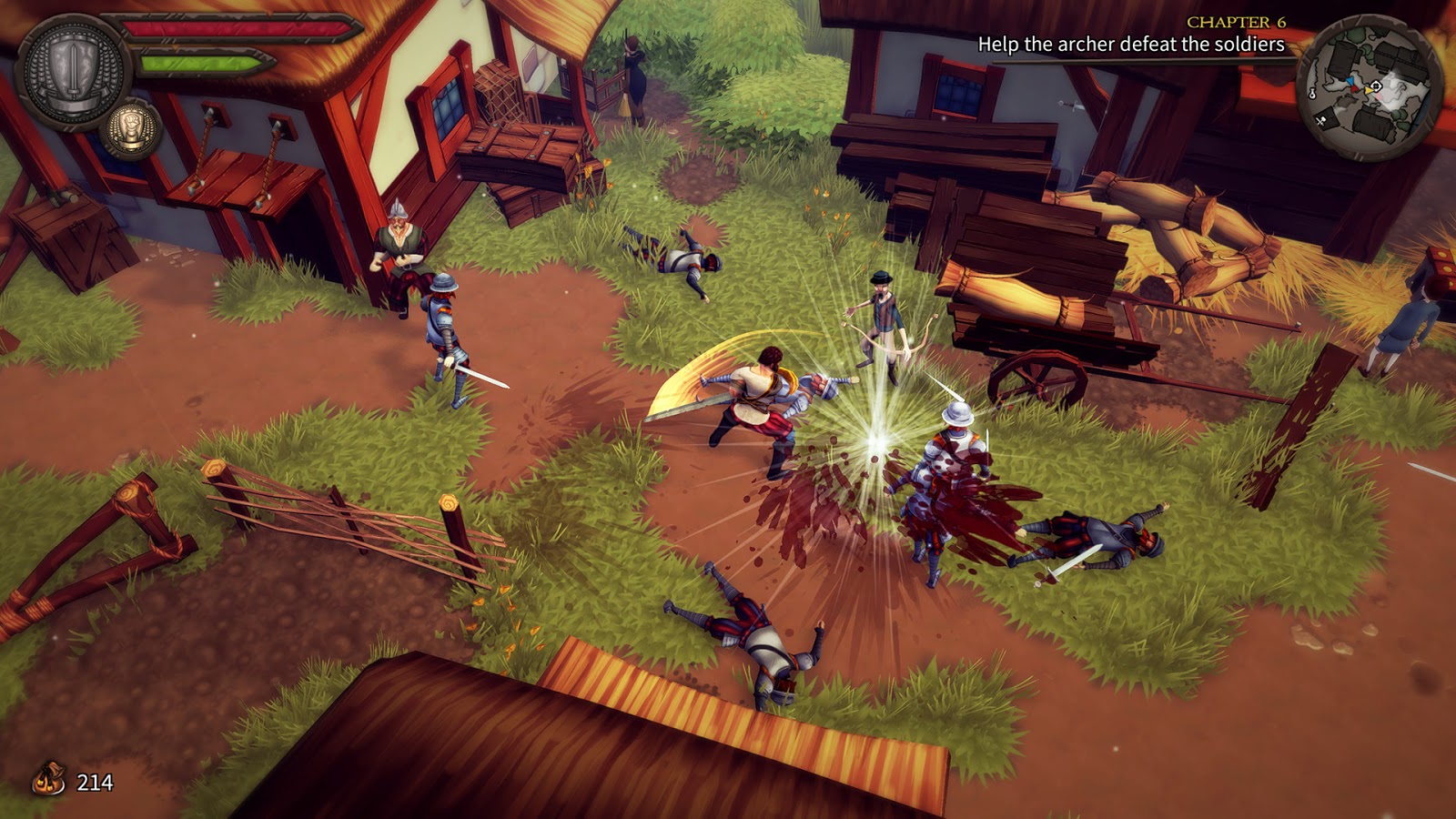 As mentioned earlier the length of play could be an issue for some or perfect for others. What is an actual issue however is the lack of replay value once you’ve finished. There is only one single difficulty available and this is contained within a single autosaving file which doesn’t allow the player to move to an earlier segment short of restarting the entire file instead of simply one of the chapters. Adding in new difficulty modes or challenges could be a nice touch in the future which would also help to offset the shorter, yet well designed, experience that Triangle Studios have created.

Cross of the Dutchman is a great Action Adventure that does everything right from the dialog interactions to the smoothness of gameplay and combat. While it may be on the shorter side, the tale and legend of Pier Gerlofs Donia is an excellent one and I hope that there is more to come in the future!