comments Share
You are reading
Gears of War: Ultimate Edition – Xbox One Review

Gears of War Ultimate thrusts you into the role of Marcus Fenix where you will lead the Gears of the Coalition of Government’s (a.k.a. Cog) Delta Squad. Accompanied by Dom Santiago, Damon Baird, and Augustus “Cole Train” Cole, you will battle for mankind’s survival on Sera against the Locust Horde. Sporting 1080p textures and running at 60FPS, Gears of War: Ultimate Edition comes exclusively to the Xbox One with additional content, dedicated multiplayer servers, matchmaking, new game types, maps, and character skins. Seeing Sera in all of its true high definition glory is riveting, engrossing, and downright fantastic. Spin up your lancers, folks, Gears of War: Ultimate Edition returns you to the world of Sera with a vengeance and is one of the most thrilling rides on the Xbox One that you can find. 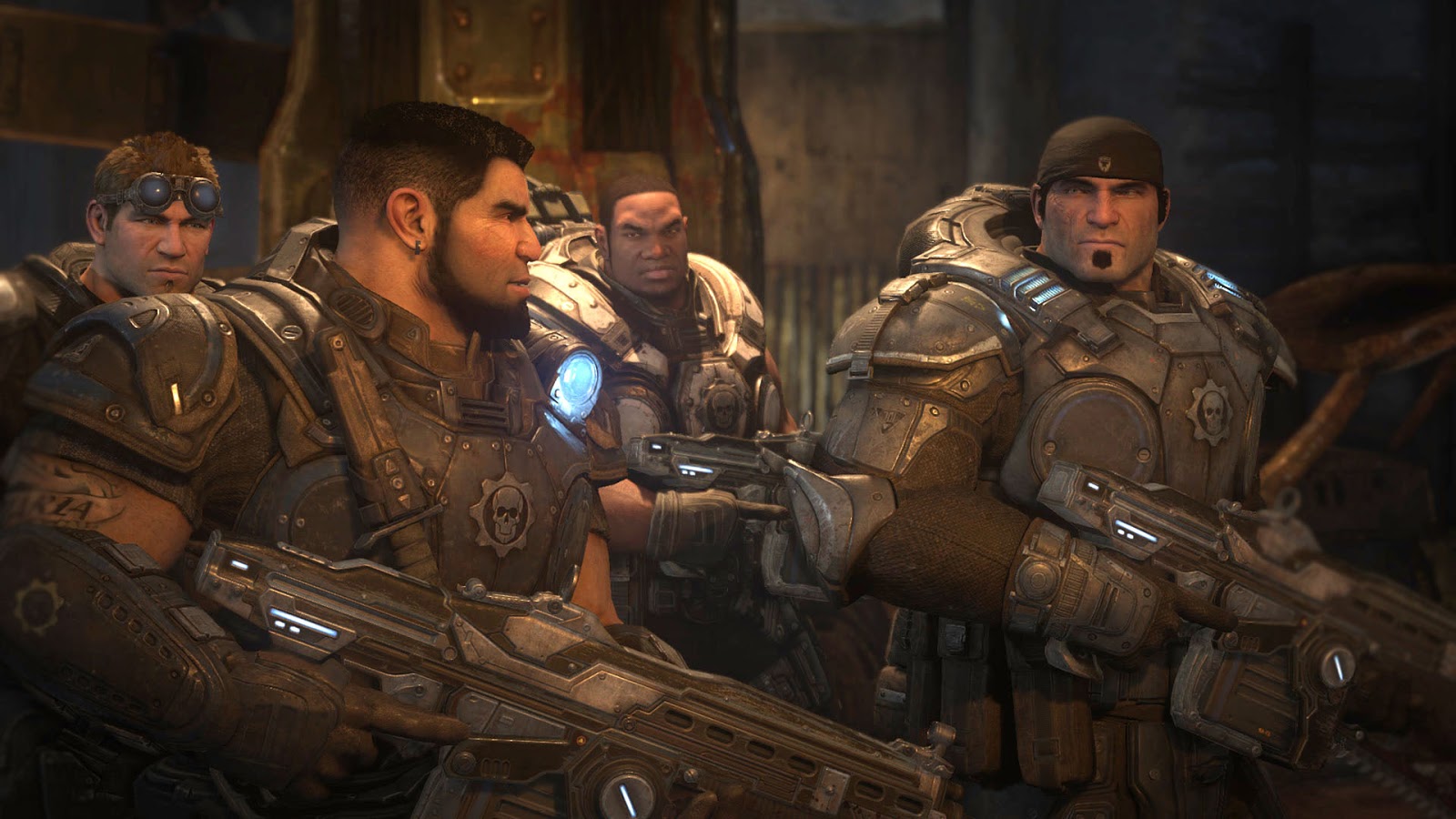 Gears of War was originally released for the Xbox 360 in November of 2006 to critical acclaim and it was only a matter of time before it was remastered and brought to current generations. Fortunately for those of us that were hooked from the very beginning, the experience is dutifully recreated on the latest generation of the Xbox platform. While nostalgia is a powerful feeling that the Ultimate Edition certainly preys on, the experience as a whole is improved upon due to the more atmospheric lighting and higher-quality textures that the remastered edition brings to you. Slowly moving through an immulsion plant on your way to the next objective is at times, downright creepy with the rain beating down on you, the thunder in the background, and the blood-curdling screeching of wretches mixes spectacularly in 7.1 surround (a new addition in the Ultimate Edition) with the creaks and scrapes as your Gears move through the plant.

The chilling echo of Marcus’s boot-heel as he roadie runs through a giant cavern filled with immulsion (Sera’s fuel substance) or the sound of firearm failure as you miss an active reload thus causing a slight jam and a delay in your ability to return to the fight. Sound plays a huge role in setting the tone in Gears of War and the remastered audio proves its worth when you first encounter a Berserker. I will wholeheartedly admit that even though I knew it was coming and I was mentally prepared, I was in no way expecting the rush of adrenaline and fear that I felt when the Berserker first appeared. The audio alone, pushed through my PDP Afterglow AG7 headset, was explosive and haunting all at the same time and set the mode for what is easily one of the most difficult parts in the entire series.

Driving along haphazardly in a Junker while alternating between driving and firing the UV-powered lighting to keep the Krill at bay is as hair-raising and exciting as ever and with the increased textures and updated lighting, the whole endeavor looks fantastic. The real winners are the Gears though. Marcus, Dom, Cole Train and Baird all look spectacular in their higher-resolution models/textures and the sharper graphics show off the rippling muscles, facial hair, and downright gritty appears of the Cogs finest. Match impeccable facial mapping/lip syncing up to the burly characters’ armor and weapons and you have a last-gen title that truly looks and feels current-gen which is a feat few can hope to master. Revisiting the Tomb of the Unknowns (where it is that you will come up against your first Berserker) be sure to pay keen attention to the shafts of light that show through the ash-covered skylights, though it will be a bit tough to do since you will have a hulking Berserker trying to sniff you out and destroy your face; still most of these levels are downright gorgeous and combined with the exceptionally well-crafted audio you run the very real possibility that Gears of War: Ultimate Edition will be a Game of the Year contender. 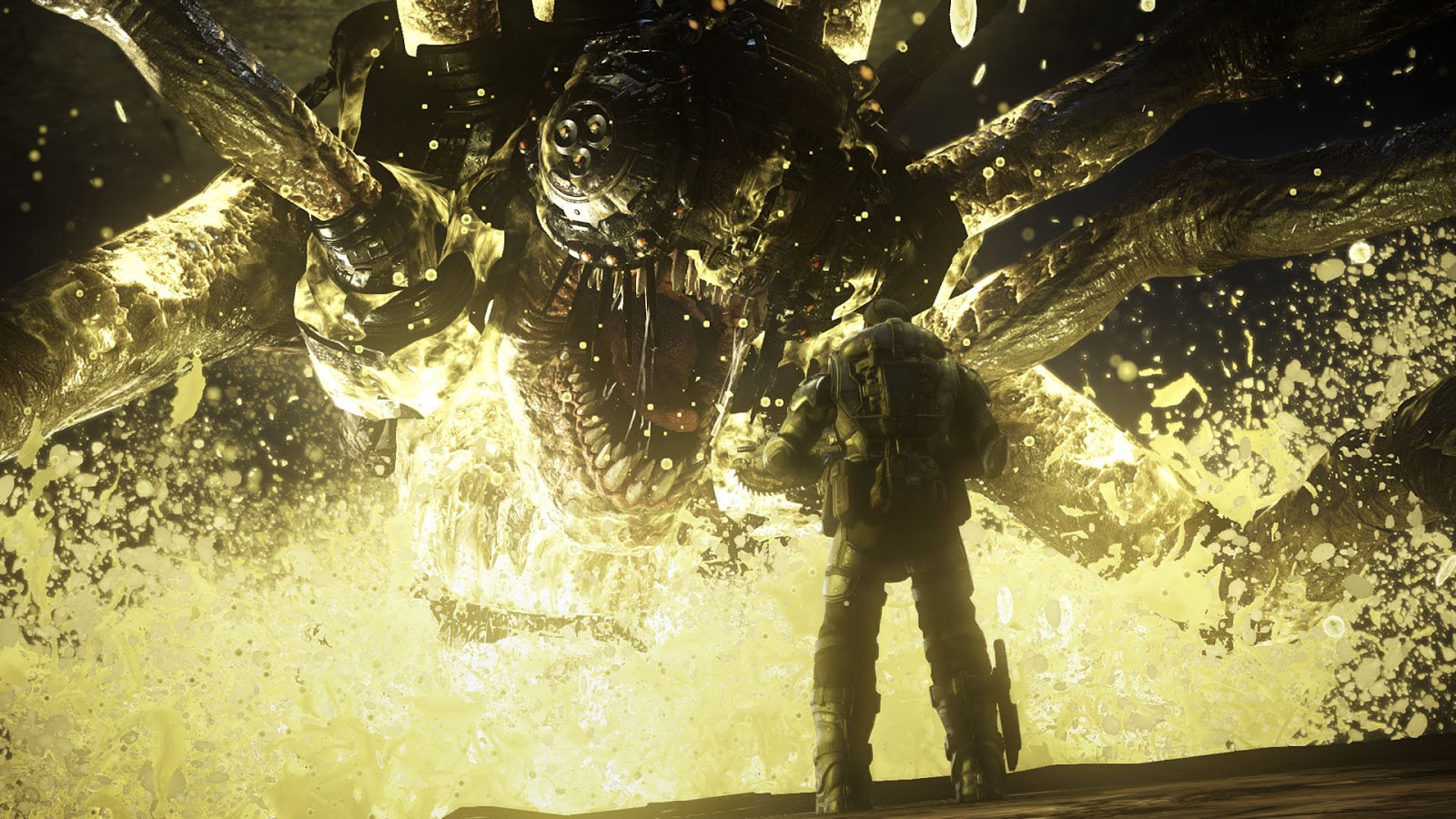 Though I spent my fair share of time marveling at the beauty of the sights and sounds of Sera, I did run into a handful of technical hiccups. The biggest, by far, was with the Gnasher shotgun; every single time I bent to pick up ammo/grenades the entire screen would twitch and jerk, simply not using the Gnasher addressed the problem, but let us be real here, who does not want to use the Gnasher? It is a spectacular weapon, though that twitch is certainly annoying. On the subject of picking up gear/ammo there were a number of times that I would simply hold the X button down and nothing would happen. At first I thought it was battery-related so I switched controllers only to find out that the issue was the same; thinking that it was a mechanical issue I pulled out the Energizer rechargeable battery pack (from PDP) and dropped in some trusty Duracell AA’s yet I still ran into the issue. When you are running through waves of Locusts, shooting everything you come in contact with, having to stop and run circles around an ammo box until the game actually recognizes you pushing the X button, well, bad things can and will happen. Beyond those two issues though, I found no serious technical flaws (though maybe once or twice the framerate could have dipped a bit, it was quick and hard to tell so I wrote it off as a one-off).

The Ultimate Edition is not just a graphic and audio upgrade; additional content that was originally released for the PC-only has been added to this particular version so players will get near-on 90-minutes worth of additional content that they may not have seen. I for one fell in absolute love when the original Gears was released and I purchased it for both the Xbox 360 as well as the PC (when it launched) so I am no stranger to the new content but given I spent far more time playing the console version than I did the PC version it was certainly a nice surprise. On top of the additional single-player content you get numerous skins (including skins from Gears of War 3) and weapon paints to choose from while playing the much-loved classic multiplayer modes as well as a few new modes. With Team Deathmatch, King of the Hill (akin to that found in Gears of War 3) and 2v2 Gnasher Execution I found that I kept coming back to Team Deathmatch as my favored mode. This is likely due to the Matchmaking functions of Gears of War. 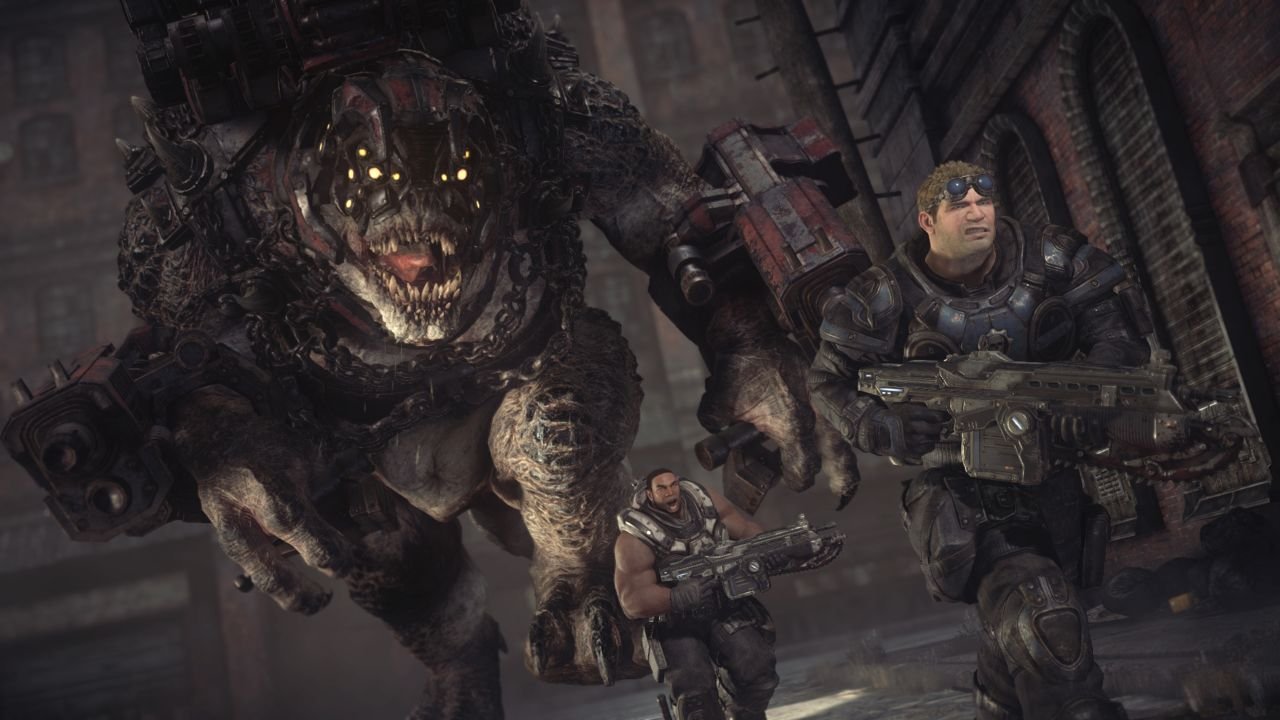 I for one detest matchmaking as there are days where I am very good and days where I am very bad; the matchmaking will place me in groups that will utterly destroy me and have me at 0 – 9 for the level (or higher), or they will place me in a match were I go 8 – 1; it is a crap-shoot and very seriously breaks the experience of multiplayer for me. Mind you this is a sentiment that I feel across the board, not just with Gears of War, but with every title that implements it. On the bright side the multiplayer matches were relatively lag-free, especially after I found out that my Windows 10 machines were seeding Windows updates to other Windows 10 computers; once I turned that off I rarely ran into anyone with a hitch in their step. It was also nice to see modes introduced in later titles added to the original title, though I will fully admit that my love for the series stands with the single-player experience as the story is fantastic.

Remastering last-generation games for the current generation has become something of the norm these days. In some cases, like those found in The Last of Us Remastered and Gears of War: Ultimate Edition, the re-release fulfills more than simply bringing a great game to a new audience. In both of those games, but especially in Gears of War: Ultimate Edition, the experience is both nostalgic and new at the same time. With new graphics, new game modes and to some users, even new content, you get to revisit the world of Sera as you work to defend humanity against the Locust Horde but you do so in a manner that is deep, fulfilling, and incredibly suspenseful at times. Minimal technical issues and fantastic improvements allow gamers to relive old experiences in a new platform while still feeling fresh and exciting. Gears of War: Ultimate Edition is the perfect homage to an already storied series.