Holy Potatoes! Another Simulation Game?!  Aside from sounding like something Robin Boy Wonder might remark on a cheesy television show, this game shoulders more than its fair share of puntastic humour.  It’s Recettear or Atelier Rorona, but instead of an anime-esque fantasy world, you have flash animation level artwork and a game that does not begin to try to take itself seriously.  By design. 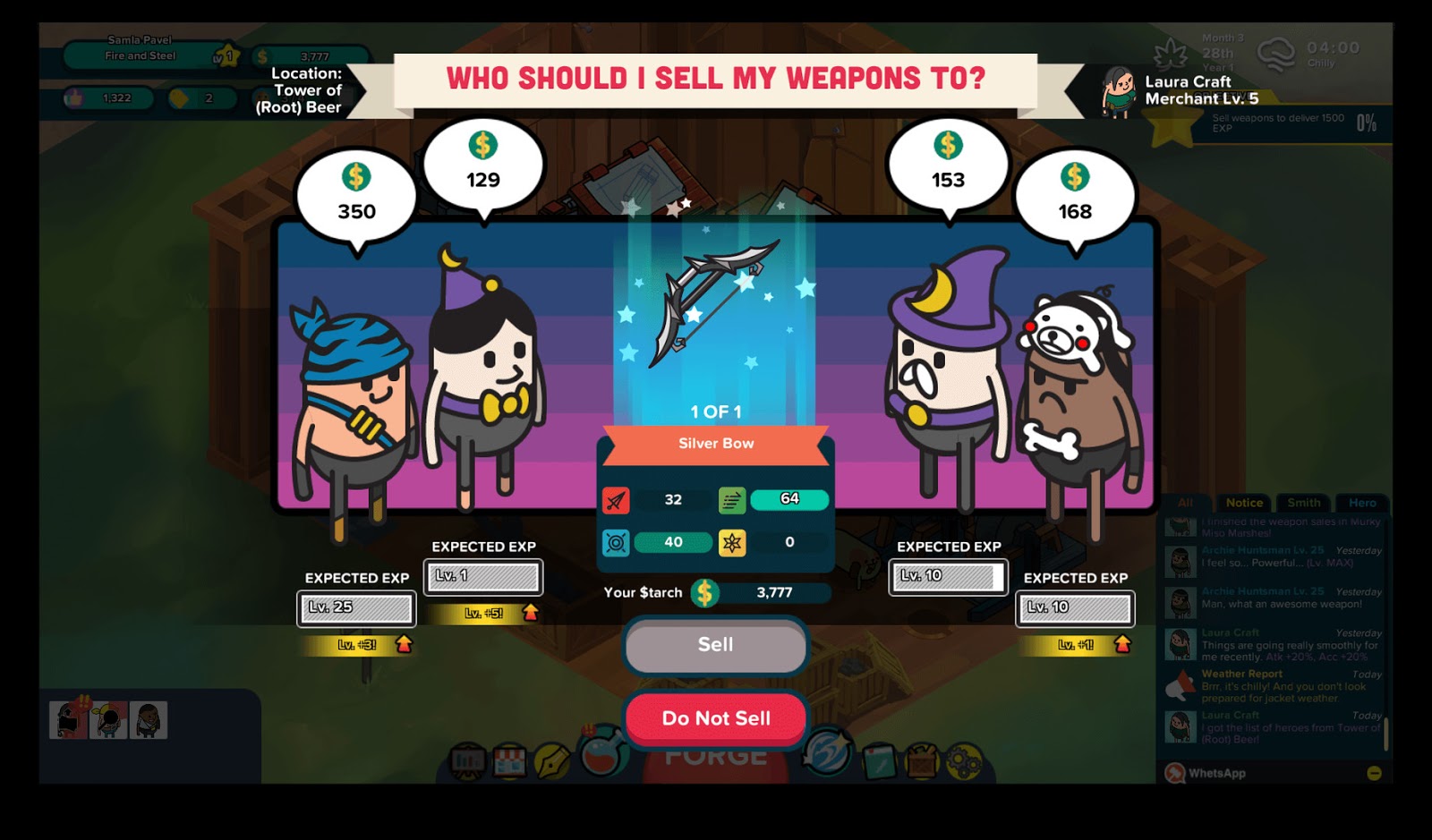 Games shouldn’t all take themselves seriously, after all, that is why they wind up being so fun sometimes!  Holy Potatoes is a shop simulator wherein you send your workers exploring for commodities that they can then use to research designs, create weapons, and then peddle them on the unsuspecting nearby villages.  It covers the full spectrum of the supply chain, from procurement to manufacturing, marketing and distribution, but the game handles almost all aspects of this.  Did you like going out and fighting monsters to get your reagents in Atelier Rorona?  This game just makes you wait a minute then lets you know what your potato-man located.  Because it is not trying to span two genres of gameplay, that should leave it open for a lot of focus on the one that it is acknowledging, right?

Well, the gameplay is simple and engaging.  Explore, explore, research, forge, sell, vacation.  Managing your huma-Erm… vegetable resources can suck you in and leave you wondering just where that afternoon went.  Before too long, though, the major drawback of this game may rear its ugly head at you, and once you see it,  like the Fed-Ex arrow, its all you’re going to see. 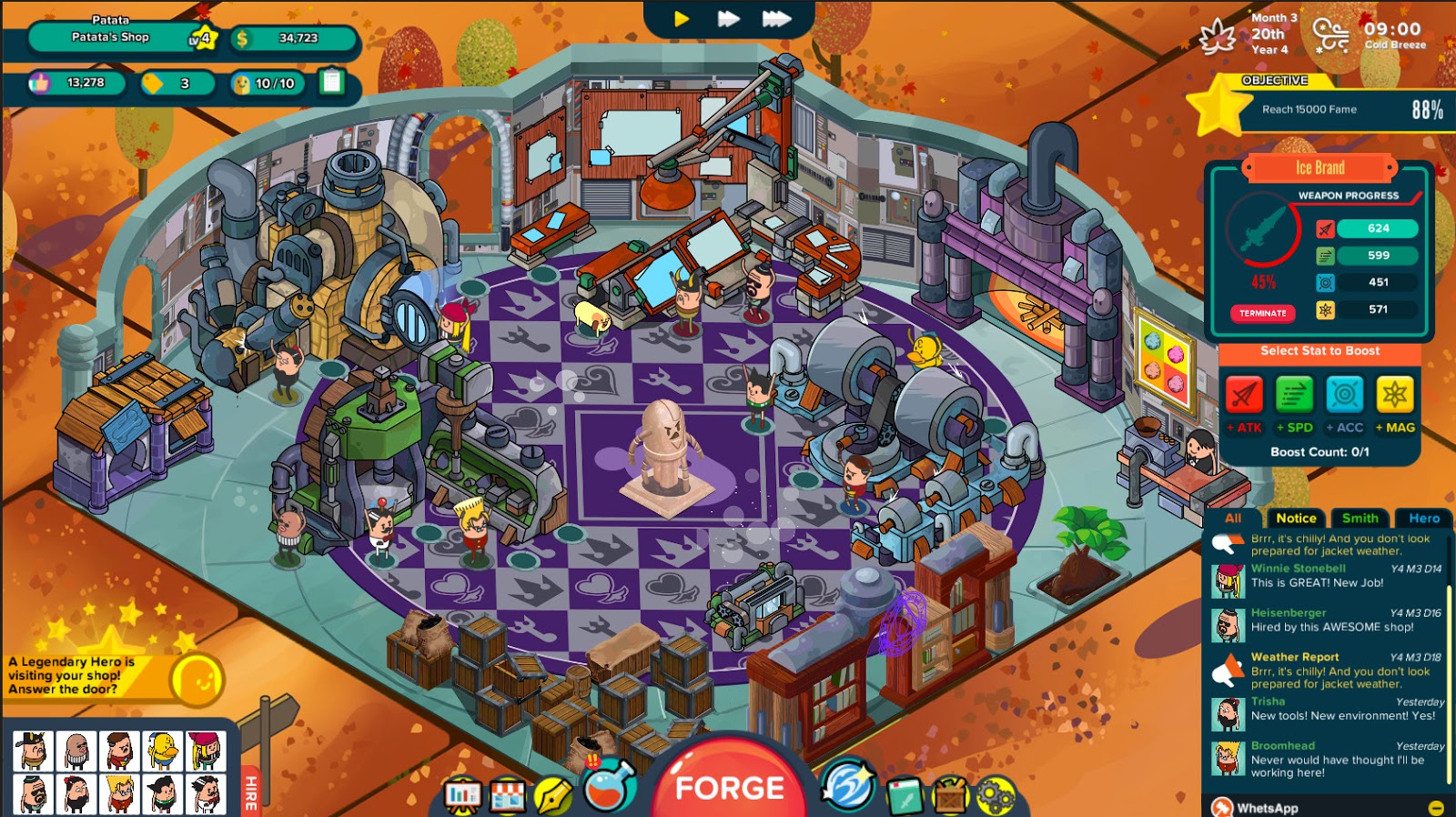 You see, this game lacks challenge.  You have a manipulative scammer that keeps taking increasingly large ‘cuts’ of your money as his take, but the game is so forgiving about this that it always feels like less than 10% of your disposable income, and he will wait patiently until you have it for him.  I didn’t outright try to get a game over intentionally, but I was able to meet three of his payments without doing any forging, to give you an idea of the pace this game takes.

Your workers are all punny references to some form of pop culture or another, from Lara Croft to Russell Peters, and all of the stops in between.  There are legendary warriors such as Clod (Cloud from FF7) that make unreasonable requests from your forging efforts, but you have what seems to literally be forever in which to accomplish their expectations, removing just about every last modicum of challenge to the game and turning it into more of a linear progression game than one of actual difficulty, as its always a matter of time until you reach the goal, even if you forge nothing but level 1 daggers and sell them to people that hate daggers. 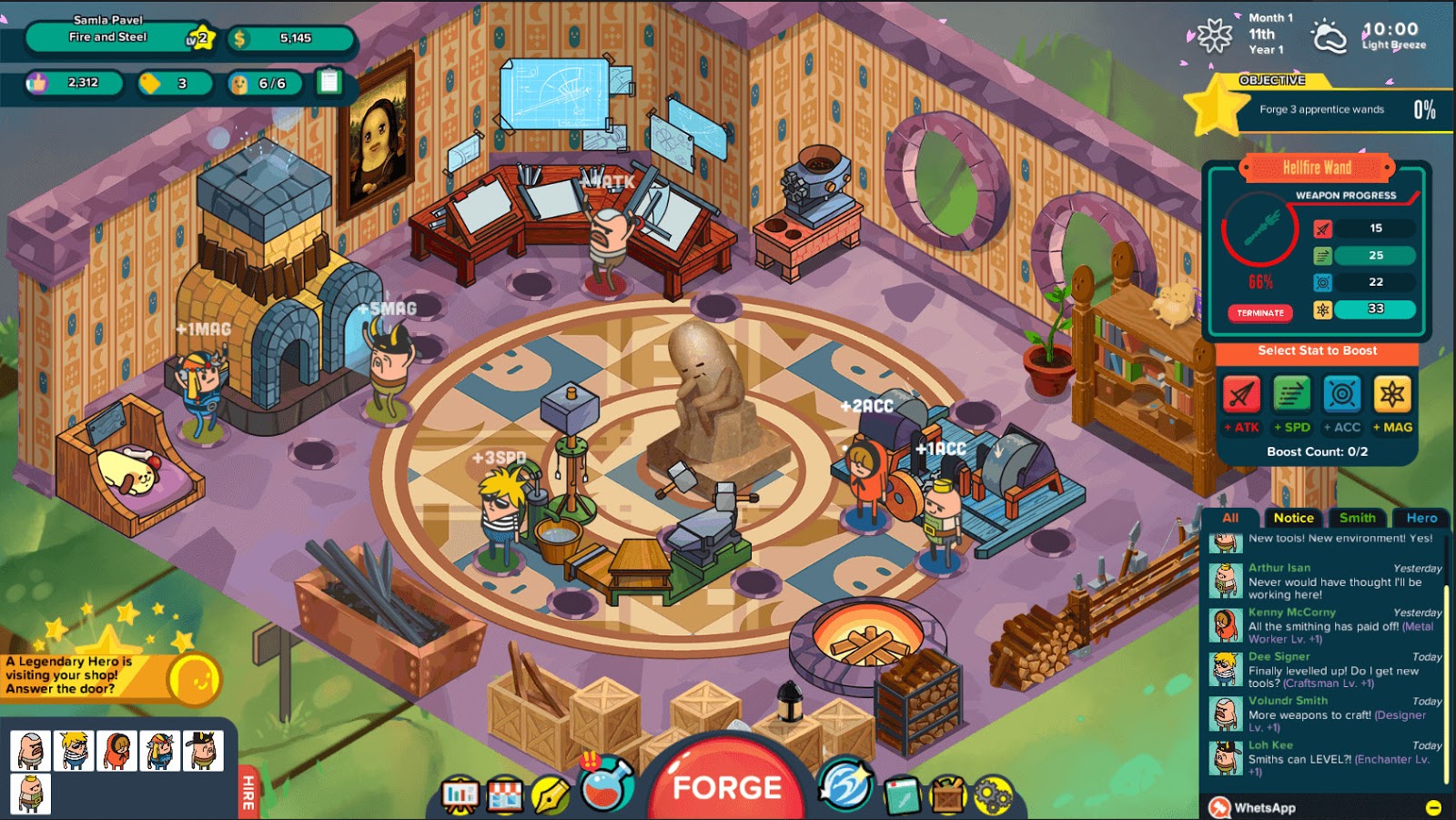 There are some systems that could be expanded and improved upon, like a morale rating per worker that improves their production, training to fast track their forging skills in a specific field, exploration, buying and selling, and more.  Your spuds rank up as merchants, explorers and there are even 11 different ‘classes’ of forgers that you can level up in, unlocking advanced ones as earlier ones are mastered, which all sounds like a lot of depth, but in reality, they each seem shallow and ancillary to each other, and min/maxing it all is just silly.

This game is funny, the graphics are appealing, if a little simple, and it makes for a wonderful time sink.  A greater challenge, and with it a need to manage your development, money and other aspects would easily boost this game much higher in my eyes, but as it stands, I’m just not sold, which is a shame when so much time and effort has been put into something that I really enjoyed when I first started playing!