Another season and another Madden game. You could be forgiven for having a cynical standpoint on the series, given that it has yearly releases and is the only NFL game in town ever since EA signed an exclusive deal for the NFL rights. It is completely understandable if you feel that every season is a generic roster update and nothing more. However, you would be wrong if you held these opinions about the newly released Madden NFL 16, which has moved the sticks forward more than ten yards this season.

Often times people get hung up on a single aspect of seasonal sports titles. Take NHL 15 for example. A lot of people got hung up on its lack of modes and in the process they overlooked the fact that the game’s engine was absolutely astounding. We loved the game itself and did not find the modes to be so barren as to knock down the entire score of the game. Some games make the transition from one generation of consoles to the other more easily than others. FIFA made the move to PlayStation 4 seamlessly.

The thing about Madden NFL 16 is that it does not just tweak one feature or simply provide a roster update. Almost across the entire board, this year’s game is better than last year’s for multiple reasons. I will admit that the presentation has hit a bit of a plateau. The color commentary is somewhat out of sync with the action on the screen at times and it has sort of a been there and done that feel to it from too many years of the same guys in the booth saying essentially the same things. The graphics, while often spectacular, are also largely similar to last year’s game. Little touches interjected into the presentation such as updates on a player’s performance have a solid television feel to them (even though at times they are somewhat obtrusive to the action on the screen and can slow down the no huddle offense). 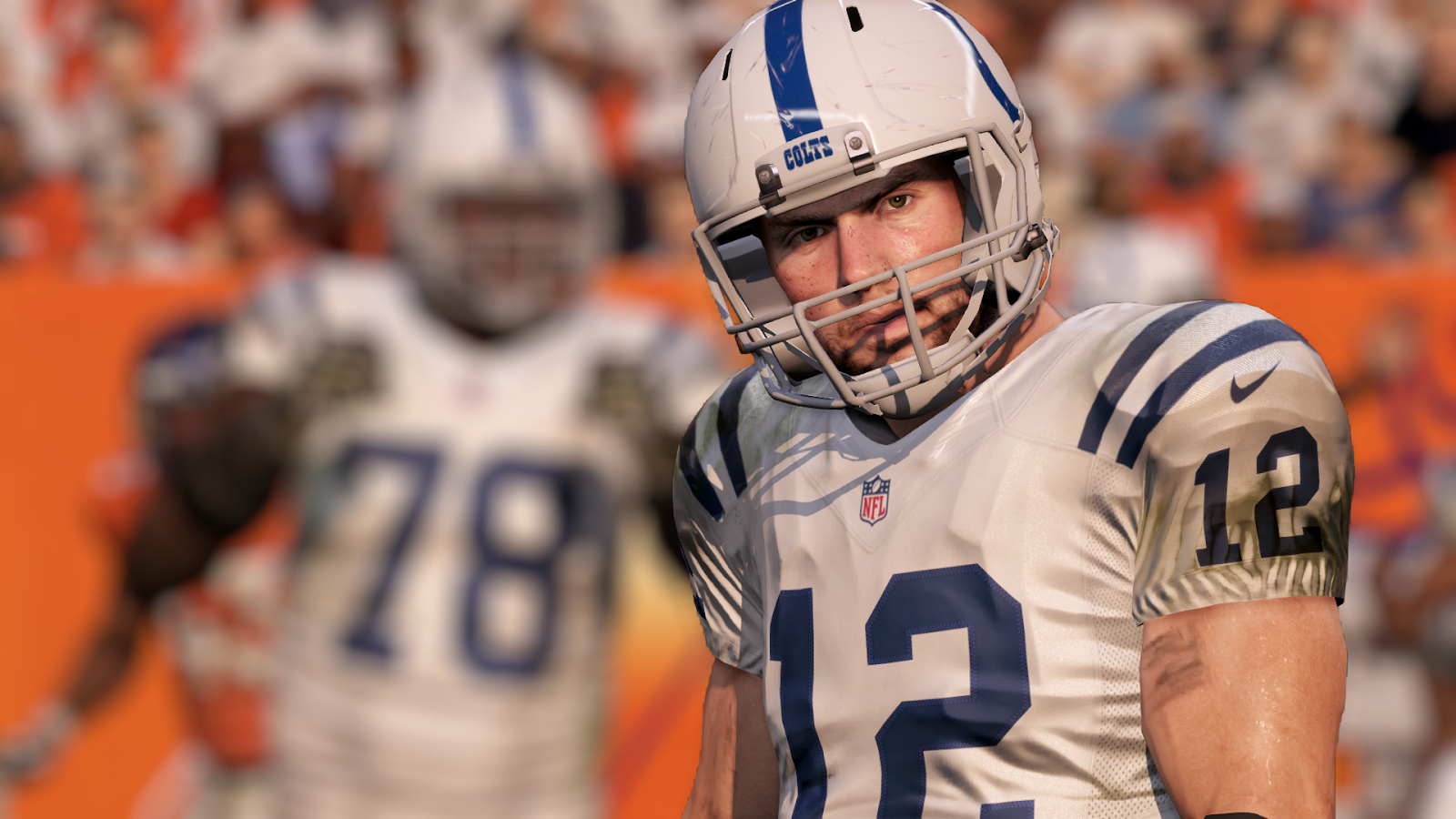 However, we get a new mode (Draft Champions) this year that should appeal to fans of fantasy football. In it you can draft one of three players every round, over fifteen rounds, to help create a roster that you can then play with. It is a quick, effective form of the fantasy draft and it is a surprising amount of fun while proving to be a quicker investment than doing a full on Franchise Mode that uses the fantasy draft option.

The Madden Ultimate Team (called MUT for short) makes its return, and while it is not my favorite of the modes out there, I know it has its fans. It meshes card collection with fantasy football as well, though you have considerably less control over your team. Instead of having to agonize over which of the three quality players you want to choose for your time like you do in the Draft Champions mode, you instead build a team literally based on the luck of the draw. This mode is a bit too much grinding for my tastes, as it is constructed almost like one of those free-to-play CCG games on the PC where you can get off to a reasonably fast start, but before too long if you want to keep collecting cards at a fairly rapid pace, you will either have to spend a ton of time playing that mode or drop some extra dollars on it.

Franchise mode is where the most fun is at. Whether you like to take your favorite team, or simply enjoy trading for particular players, developing younger talent and trying to make Hall of Famers out of the older players is a lot of fun. The draft with its story lines, the way you progress players using experience every week and more show how far this series has come since its inception. It is hard to believe that once upon a time sports games used to have a handful of playoff teams thrown together in a randomized playoff format and nothing more to sink your teeth into.

All of the modes, bells and whistles and online options don’t mean much if the product on the field suffers or feels stagnant. I am happy to report that the actual gameplay is better than ever. The impressive tutorials help teach everything from basic concepts such as running or throwing to ball to more advanced ones, such as special moves for running backs or how to attack certain kinds of defenses in the passing game. All of the while, the interface does a really good job of providing tips and context without getting in the way. There is a new fight for the ball mechanic in the receiving game that takes some getting used to, but it is a welcome addition. It is more viable if you are throwing the ball higher into the air (lob or touch passes – the latter of which can be more easily executed this year with a double button tap as opposed to trying to press and hold it just so) than zipping bullets four yards from the line of scrimmage.

Defense is still tricky to master. To be honest I usually control a defensive lineman and let the AI manage my other ten players. I am not very good at pass defense, so using the secondary seems like a bad idea. I will take over on a long, deep lob and try to do an aggressive catch/pass breakup, but I start those plays on the line trying to jump the snap and kill the QB. Blocking is somewhat inconsistent in the offensive line play, but it seems to come in waves. I will go several snaps getting penetration each time and then get completely stonewalled by the o-lineman for another six plays afterwards. This makes the running game a bit more of a crap shoot than the passing one, because a QB can get by with spotty line play using quick releases and smart hot routes, but most of the time the running back has no prayer if the defense breaks through almost right away.

Games have an excellent sense of tension. While it is still possible to blow things out against an AI opponent when you learn their patterns and tendencies, I have to say that this year’s madden is harder to pick up on these things than years past. In prior games of Madden, I usually had the AI completely figured out by about midway through my first season of Franchise mode, but I do find myself surprised by run selections, play actions and defensive alignments and adjustments than I used to be, and that lends a nice level of authenticity to the proceedings.

There is a game within the game now on the field of play as well. For over a decade now, players earned experienced in some fashion or another based on the kinds of seasons they had. Over the last year years, this has become a more pronounced item as player progression has evolved from a mysterious boost that happens at the end of the season to experience points that you can spend on specific stats. Want to turn that wide receiver into a burner? Spend on speed and acceleration, but be prepared for some drops. Want to make your left end nimble with finesse moves to slink past that right tackle? That may help you get to the quarterback, but you might also get dropped onto your backside if you are not strong enough to push back.

Now there are dynamic goals posted throughout the game. To be honest, some of them feel incredibly random, especially on the defensive side. You might be asked on offense to throw the ball to your receiver three times on that drive to help establish him. You might be asked to run the ball four times to grind out clock. On one play, my halfback had fumbled away the ball on the prior possession, so my new goal was to finish this drive without fumbling. However, on defense it makes very little sense to get an objective for something like holding the opposing team to twenty yards or less if you are in the tail end of the fourth quarter and they are down by a ton – ensuring that they will be airing the ball out a great deal. You can see some of this in the video below, which is one entire game, or the video above, which is a handful of highlights assembled for quick viewing.


Completing these objectives earns you not only experience, but confidence. This was a somewhat new mechanic that got introduced last year, and it serves to add a temporary boost to the player. If the player’s confidence is high enough, they might have the stats of an 89 overall player instead of the 86 they are at their core. These kinds of things, when blended with the rookie scouting, retirements, contracts and more of the Franchise Mode make for an engrossing experience. I played through my first season in about two and a half days. That is a lot of Madden concentrated into a short period of time, but it was an absolute blast. Given that there are other features like updated rosters and weekly challenge updates with the MUT mode, there will be ample reason to fire up Madden throughout the NFL season.

Certainly Madden NFL 16 does in fact have a roster update, and it has seen a handful of visual touch-ups, but there is a lot more to it this year than most. There are a few rough edges that could still be smoothed out, but the experience is still an entertaining one and the development team has found a way to move the series forward further than in the last few years. First down!