HDMI is such a fantastic output when playing video games, carrying high quality sound and audio to your system. However, with all of the gaming consoles out on the market now, not every television has as many ports as you might need. This is where something like the OREI HD-401p 4×1 HDMI Switcher comes into play, as it allows me to take four different devices and draw them into a single port on my HD television – and it works wonderfully. 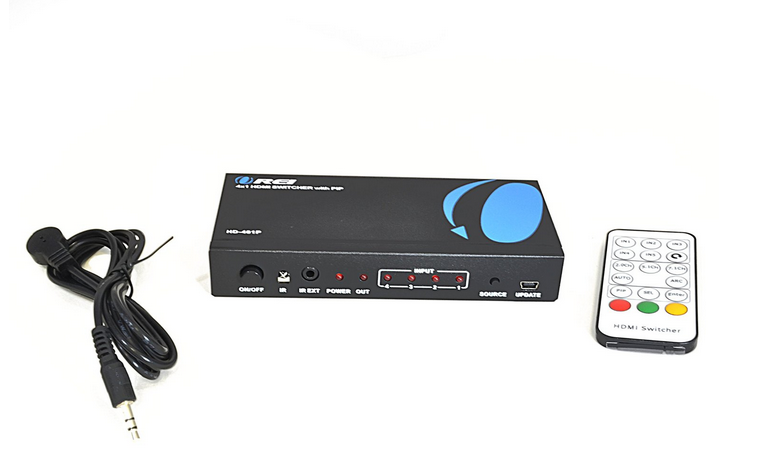 Recently we had a chance to kick the tires on another similar, yet very different device: the OREI HD-104 1×4 4 Ports HDMI Powered Splitter. The differences are quite basic, despite how similar the two units look at a glance. The splitter takes a single signal and branches it out to multiple screens, while this switcher allows me to hook up my PS3, PS4, Xbox One and Xbox 360 all to my 3D television in the den through a single input. This leaves my television’s second HDMI input open for my PC. As you can guess, I have a lot of wires involved in that setup and by combining the two products, I solved multiple problems at once.

So step one was getting the device hooked up. This is a pretty easy job since everything is clearly labeled on the back of the unit. You have one output and up to four inputs. For my initial test, I simply routed all of my devices into the back of the television and then plugged the unit into my nearby surge strip (this is an actively powered device, which is a big help. I was using a passive one previously, but the PlayStation 4 did not always play nice with the switching). My only real complaint is the shape of the power adapter. It is one of those elongated ones that covers a second plug on the surge strip. If the design had turned that adapter 90 degrees, it would have been perfect, but combining the two OREI devices on the same strip uses four plugs instead of two (the splitter’s source is the exact same design).

After that I plugged in the IR extender and powered the switcher on. Every time a new device turns on, the switcher automatically bumps over to it – which I think is pretty cool. I started with the PS3, then the PS4, switched to the XBox One and then the XBox 360. Each time the device switched flawlessly. Next I made use of the remote, which comes with a battery and also a 3M adhesive pad to help set it up the way that you want. The receiver is a little fickle. It has great range, but you do need to be pointing at a specific side of it. Using the adhesive pad, that was easy enough with my entertainment stand. From there I was able to switch from one device to another flawlessly. There is also a manual switch on the device itself that can be used.

It is worth noting that this switcher handles full HD resolution. I gave it a quick test with my PC and it handles 4K x 2K just fine, and I also tried some 3D with my PS3 and PS4 and both worked beautifully on the television. I have used switchers in the past that seem to cause a slight bit of scaling where information gets cut off around the edges, but there was none of that here. The sound and picture showed up exactly how one would expect. The only oddity I noticed is that with my setup, every now and then when I load in a downloaded PS3 game, there is a low crackle sound that comes through my speakers just as the game first loads. No distortion in game, it is not even a loud sound, and it is only on my PS3. This leads me to believe that the issue has more to do with whatever the PS3 is doing at the time than the device, and again – it is really sporadic, but I thought I would mention it.

The device itself is fairly small – and the design is almost identical to that of the splitter. It is made of metal, mostly black with some blue and white text and design, with some lights on the front and your ports on the back. It doesn’t get warm at all – I have this sitting next to my splitter behind the middle speaker of my surround sound setup. There is a faint reddish glow from their lights at night coming from behind the speaker, but you almost have to be looking for it to notice, though they would no doubt be brighter if they were simply pointed into the middle of the room. Neither one can even be seen back there however, which gives you an idea of how compact their profiles are. 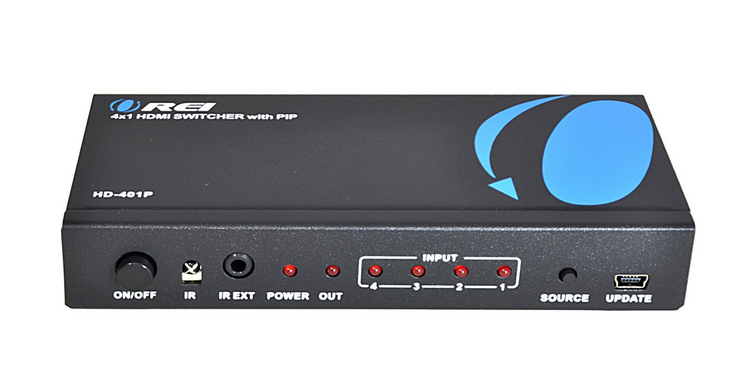 One other feature that is worth noting and certainly different from any
other switcher I have used is the option to run picture-in-picture
between your inputs. Want to play PlayStation 4 on the big screen while
your son plays the Xbox 360 in a smaller window? Easy enough to do. It
is not a feature that I make use of on my own as a gamer much, but with
the family about? It works well for our timeshare.

Now my current setup is actually a bit more involved than most, but might be useful for gamers looking to capture video content as well. I have all four of those devices running into the 401p switcher, and then I output my switcher into the splitter. From there I output my video signal into my AverMedia capture card and to my television. This serves the dual purpose of cutting back on the number of extra cables I have running to and from my capture card (because normally you pass through the card to your television, but there is no need to do that now). This is handy, because sometimes the capture card pass through does not want to work unless the PC is on. That problem is now solved.

Additionally, the PS3 has an HDCP option that cannot be turned off. I was previously making use of a component adapter cable provided by AverMedia to get around this, but the splitter actually strips the HDCP protection out. This means all of my video content can be captured both easily and at the highest possible quality. After hours of using this particular setup, I can honestly say these two devices solved multiple problems for me in terms of handling several consoles, capturing video and getting a crisp, clean signal to my television. Both are highly recommended, but while they appear similar, they serve two very distinct needs.