comments Share
You are reading
Battle of the Bulge – PC Review

Battle of the Bulge has several things going for it, from a clean interface and a solid multiplayer system. However, it sacrifices some depth in favor of a kinder learning curve. The end result is a fun and accessible strategy game that lacks some of the replay value of deeper strategy titles. 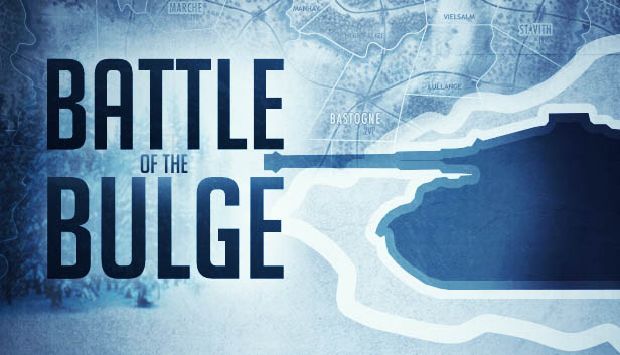 The setting is not exactly new territory as you find yourself commanding units through several scenarios set in Western Europe. There are tactical elements to consider in pitting your forces against those of the enemy, but you also need to manage your supply lines and take care not to let time slip away as the historical framework used for these games has some flexibility to it – but battles cannot go on indefinitely either. Terrain is also a factor – you will want to take note of bridges in particular I found.

There is a tutorial and a quick start guide that both make Battle of the Bulge quite easy to learn. Given the need to balance combat with time and supply management, there was the potential for Battle of the Bulge to be very confusing, but in fact the rules are quite simply laid out no matter which side of the conflict you are on. Combat has a streamlined feel to it that makes for a good tactical experience that does not get bogged down in menus. Every activation has some counters that help to keep the pacing brisk – a definite plus. 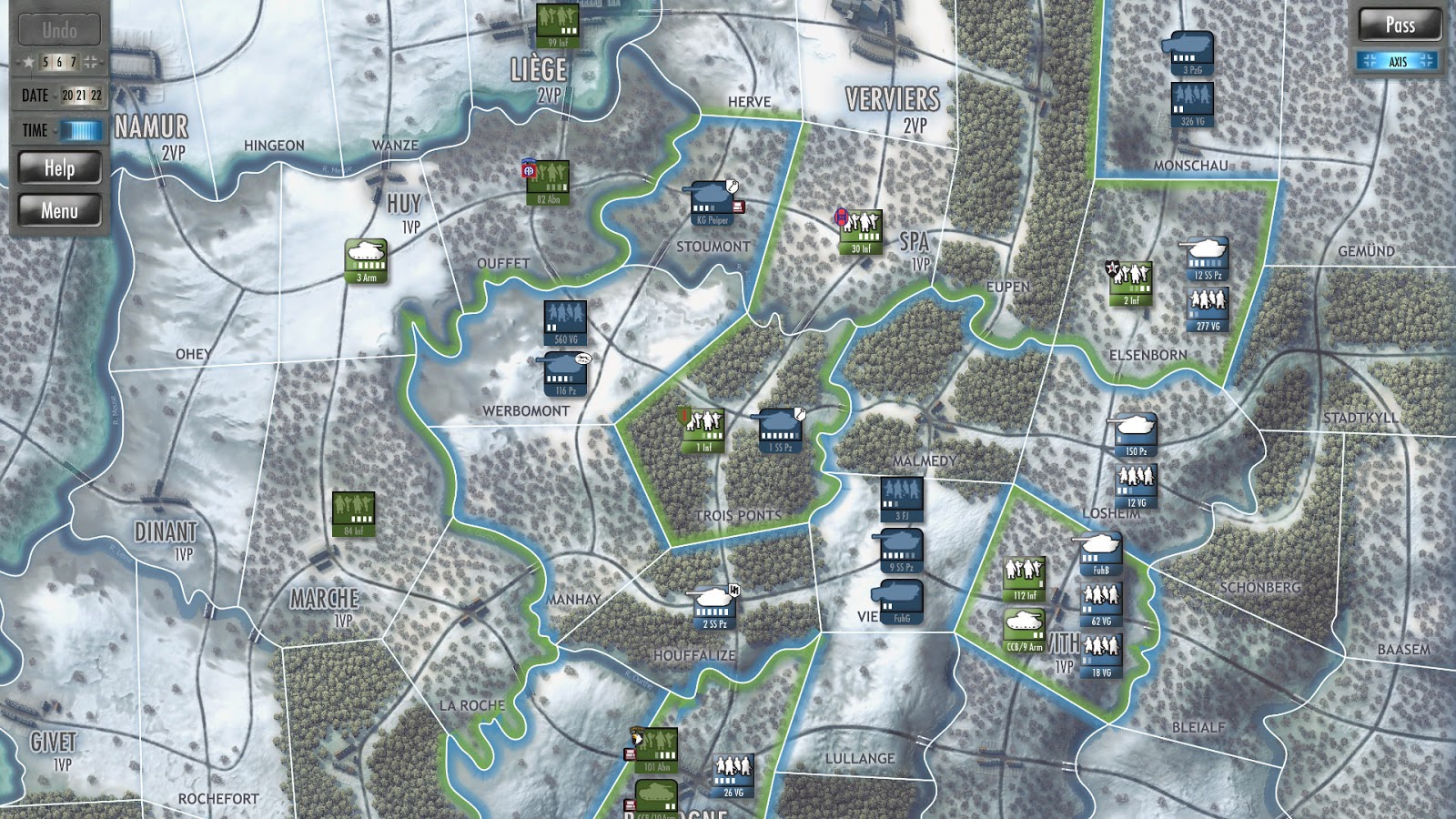 Where things can feel somewhat restrictive to more experienced fans of the strategy genre is in that there are really only three core units: infantry, mechanized and armored. The three units are distinctive enough that everything feels balanced, which also lends itself to the quick to learn and accessible multiplayer, but it did leave me wanting for a bit more depth. The AI makes some questionable decisions at times as well. Generally they work well defensively, but I noticed a lack of awareness at times if I was bringing my units around to flank. Unless a supply line was in imminent danger or my units got really close, the AI generally ignored my flanking units – usually to to their own demise.

In terms of the visual and music presentation, they are pleasant but the graphics are not a powerhouse display by any means. Thankfully the maps and units are easy to distinguish from one another, though there was a prevailing sense of sameness from the largely snow-covered terrain. That said, there are some nice touches in the historical photos and commentary – a boon to those who are interested in the time period. 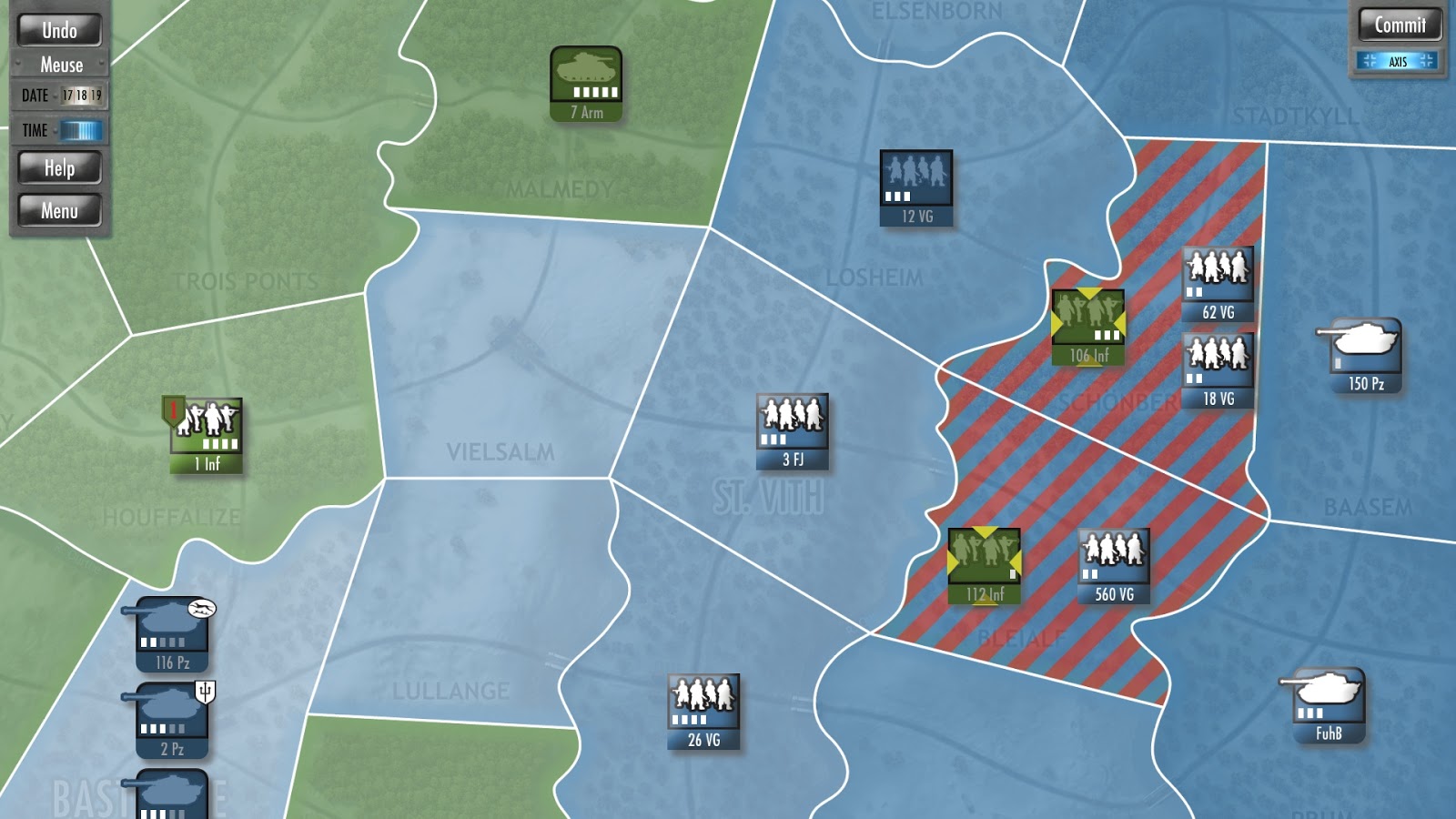 I would say the greatest amount of replay value comes in the form of multiplayer. There appears to be a relatively active community, as I never really struggled to find a match. I suspect this was helped by the cross platform availability of the game – something I wish more titles took advantage of. Dropping players into a silo based on their platform dramatically reduces the pool of available multiplayer competition, so having the pool opened up to PC, iOS and Mac is a big win for the title.

The game itself is not terribly long – you can roll through most of the content in a matter of hours if you have familiarity with tactics-based games like this. For those looking for a readily available, balanced multiplayer experience, Battle of the Bulge should hit the mark. Additionally those with less experience in the strategy genre should find this title to be accessible. However, those looking for more units and depth might come away disappointed in the overall offering.