I finished Bloodrayne a long time ago and decided to play it again to write this review. It was one of my favorite games after all. The story is about a female vampire warrior who joins a secret organization and chases Nazis preparing to unleash mystical forces on the world. 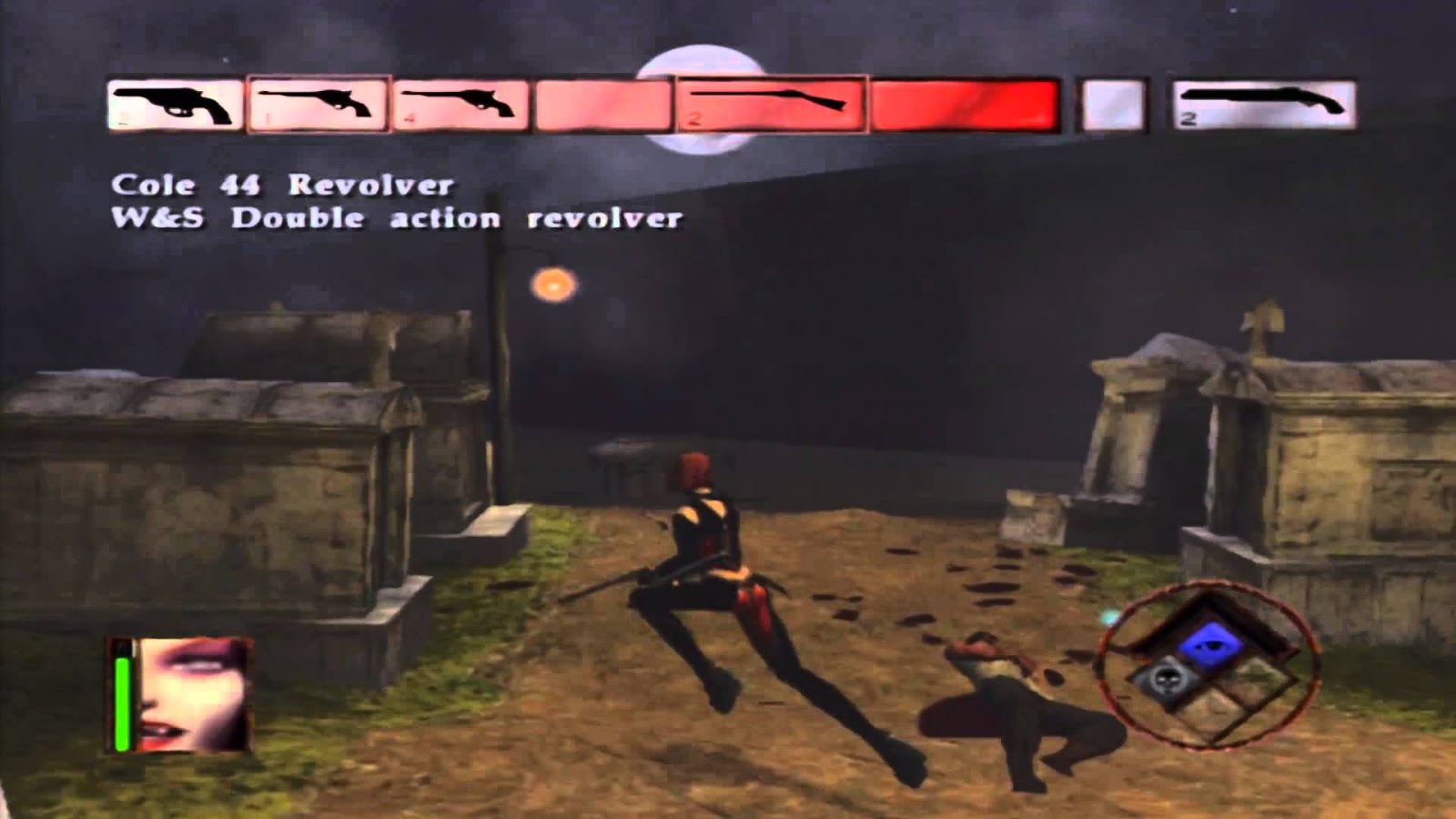 The game opens with some cool music and a beautiful picture of Rayne. Then you select difficulty level (I always choose normal) and start with a short tutorial, where another vampire gives you directions. The first mission finds you in a deserted village in a swamp. A strange disease turns the inhabitants into horrible mutants, so you must trace the source of this evil and destroy it, meanwhile saving any trapped survivors.

A swamp is not the best place for Rayne because she is vulnerable to water. Thankfully, she doesn’t die immediately when she falls in it, unlike Kain in Blood Omen. A radar shows your next destination(s), so you are in no danger of getting lost. Your first enemies are zombies, spider-like monsters and disgusting nests. Some zombies wield guns which you can collect after killing them. Rayne breaks walls to access new rooms in abandoned houses, jumps on a flooded graveyard’s tombstones or walks on electricity cables to cross inundated areas. There are also simple puzzles to solve, for example find a battery to fix an elevator or activate a pump to lower the water level in a basement. The first chapter culminates in a dilapidated shipyard, where a huge, ugly thing chases you everywhere. The brown colors, choice of scenery and sound effects create an atmosphere of decadence and horror. 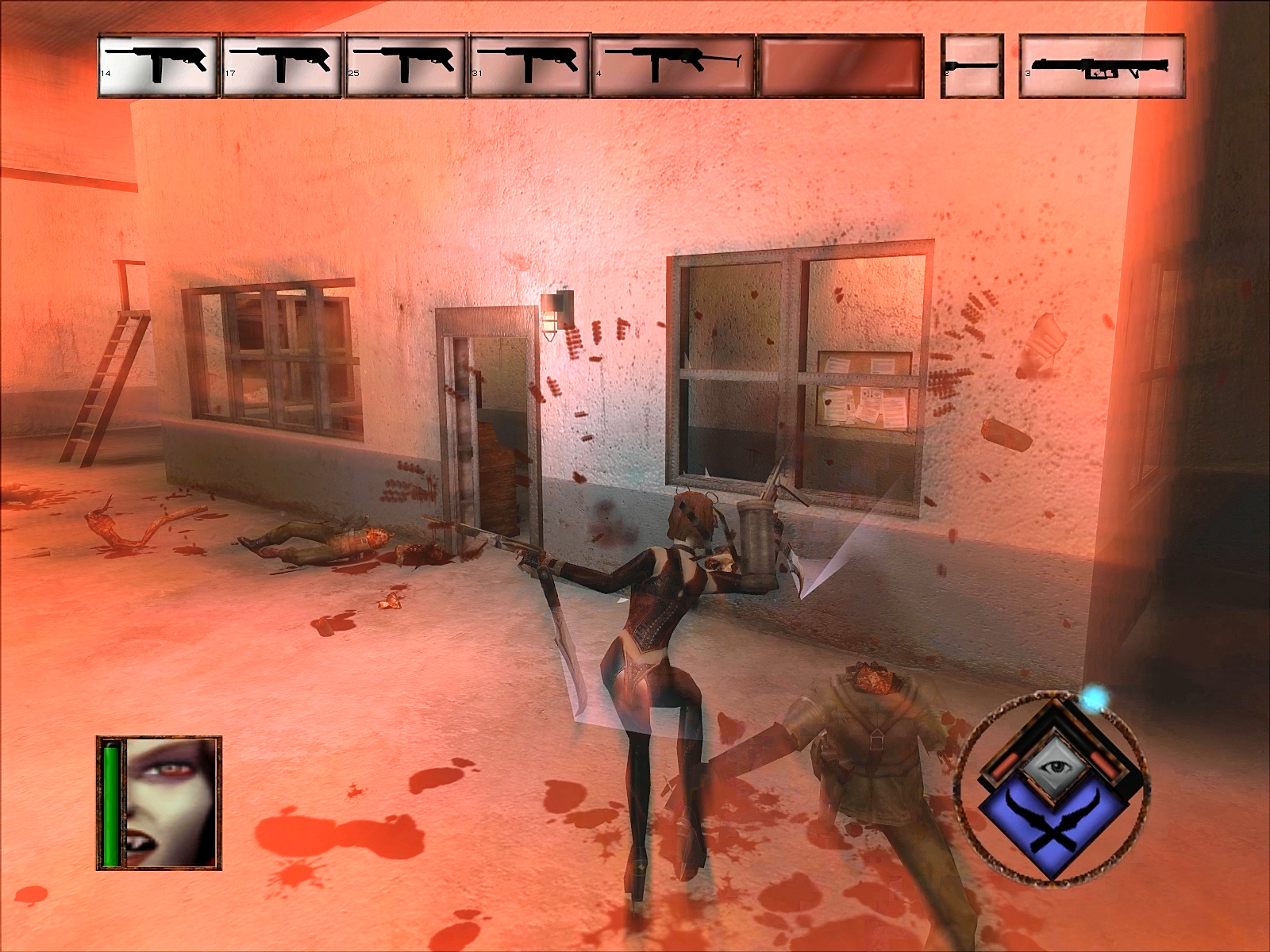 The second chapter takes place in a military base. Now you learn more about the nazi plans and their connection to the occult. You face soldiers who attack in small groups, shoot you from a distance or toss grenades. I love how they scream “get her off me” when you bite them or try to run away after you have chopped their arms. Yes, this game isn’t for kids. I especially enjoyed shooting a deranged priest who was hiding behind a moving turret. You run in a dock, a garage, long corridors, barracks and other facilities, with ladders and elevators connecting the various levels. Many places are crawling with disgusting creatures and the caves after the mines look extra-terrestrial.

The third chapter begins with a cinematic sequence showing Rayne terrorizing a German official in a castle during the night. Then you make your way into an old castle, trying to prevent an officer with superhuman strength from releasing an ancient evil. There was a time when I mounted a giant mecha and battled other machines of the same kind. I knew Nazis had advanced technology but that surprised me! At the last stages I fought one boss after the other, each one requiring different tactics. The ending is short but entertaining and lets you know there will be a sequel (which, of course, I own). The change of scenery in and around the castle is refreshing and I appreciated the exploration elements. However, this is where I realized the game could have benefited from more vivid colors and more detailed models and textures. The plot also seems to be missing parts, as new villains appear and die suddenly. Still, the third chapter is the best. 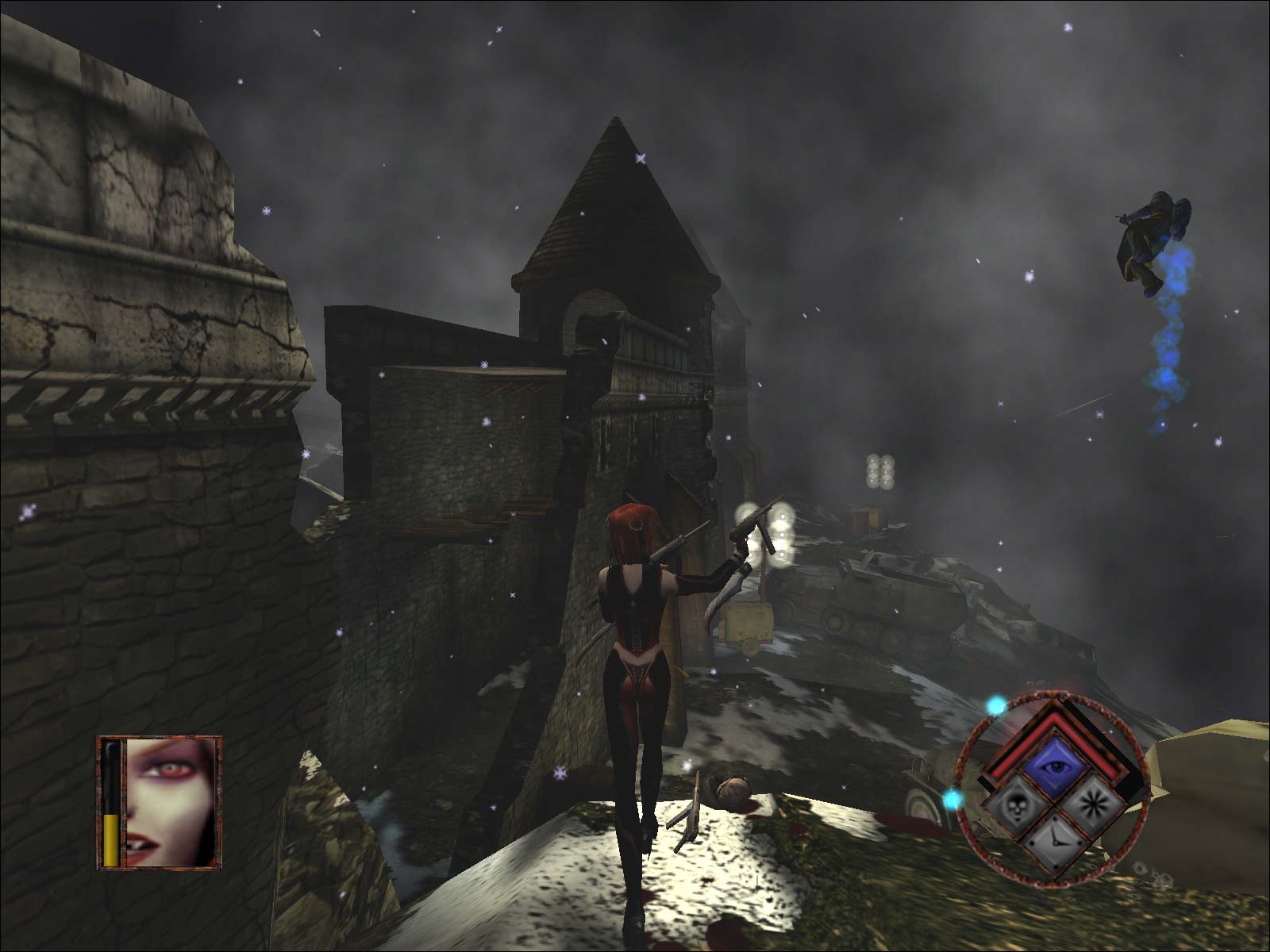 Rayne is my favorite video game character. Her face, hair, clothes and voice are perfect for me. She is written in an interesting way too, as she kills ruthlessly, jokes, saves innocents or worries for her friend Mynce. Her abilities are amazing. She runs fast, jumps high and can land harmlessly like a cat even if she falls from a tower roof. Her acrobatic moves are graceful and lethal, especially when she swirls her twin blades and slaughters everyone in her path. During melee combat a meter is filled and when it is full she can enter rage mode. Then she performs devastating combos in slow motion, with some of the most imaginative, fluid animation on PS2.

Rayne has three types of special vision, which allow her to spot quest objectives through solid matter, see very far in the distance or slow down all movement. This is great for dodging projectiles, walking on very narrow ledges or hitting an enemy before he can react. Rayne carries four types of weapons: light firearms, heavy firearms, grenades and special weapons. Shooting with two weapons at once, each pointing at a different target, is great fun thanks to an accurate auto-aim mechanism. Some bosses, such as the gigantic Mauler at the end of the second chapter, are almost immune to bullets but normal humans bite the dust quickly.

Perhaps Rayne’s most characteristic ability is feeding. She can grab an enemy, bite him and start drinking his blood to replenish her health. She may also use him as a shield while doing so and has a retractable chain to pull opponents close from a distance. Once, Rayne grabbed a guy flying with a jetpack with her chain, fell from a stairwell with him and started feeding on the hapless fellow as soon as they hit the floor below.

The game can be played like a PC first person shooter and the control is precise: with the left analogue stick you walk forward or backward and strafe left/right· with the right analogue stick you look up/down and turn left or right. L1 is for slashing and R1 for shooting. L2 and R2 let you choose a type of weapons. The other buttons are for jumping, turning 180 degrees immediately, activating the rage mode and feeding. You can even adjust how fast your character reacts to your commands.

Years ago I found Bloodrayne challenging but this time I completed it more easily. If you die you start from the beginning of a stage, however, this isn’t a problem. For example, the third chapter has a mission with a minefield, guys shooting rockets, a robot, a collapsing bridge and an officer guarded by soldiers. I was killed a few times but the stage is short and there are no cheap hits, so, after some tries I completed it. In addition, if you start a stage with limited health, progress a little, get killed and select “continue” your health is refilled.

Bloodrayne made me feel I controlled a supernatural character who can overcome any challenge thanks to her unique abilities. Its original combination of hack & slash action with shooting and horror provides for a highly entertaining experience. It’s a pity Rayne never got a proper movie but her introduction on PlayStation 2 is fantastic. 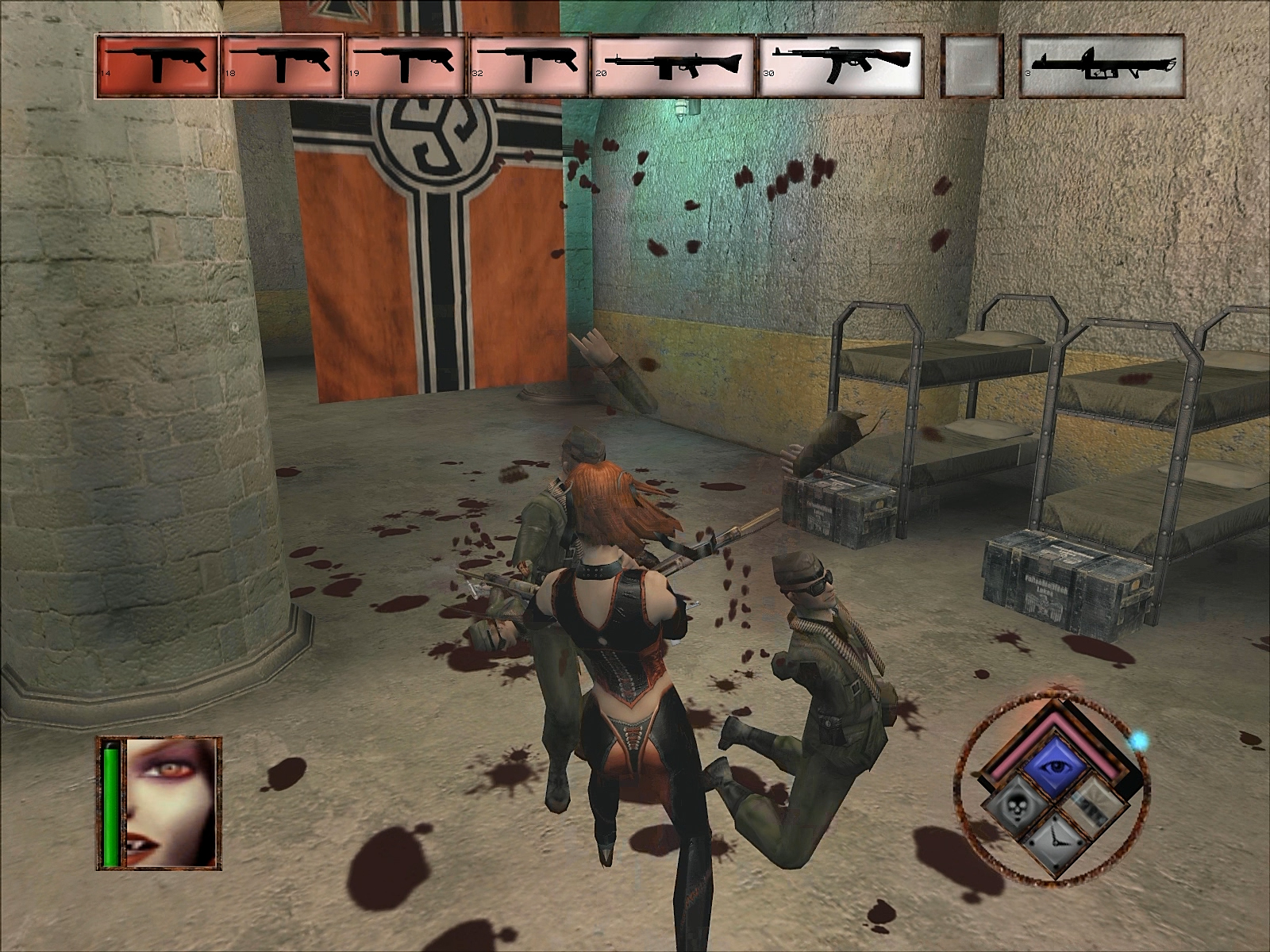