comments Share
You are reading
Dragon Quest Heroes: The World Tree's Woe and the Blight Below – PS4 Review

When comparing Square’s Final Fantasy and Enix’s Dragon Quest, it could more often than not be said that the Square side of the marriage is a lot more experimental with its series. Having seemingly come out of nowhere, the Dragon Quest series has been given a different spin on things by Tecmo Koei’s Omega Force not unlike what they did with Nintendo’s The Legend of Zelda when they created Hyrule Warriors. Unlike The Legend of Zelda however, Dragon Quest’s newest entry might look like a Warriors title, but it is actually something more akin to a JRPG with some Warriors elements. This is Dragon Quest Heroes: The World Tree’s Woe and the Blight Below. 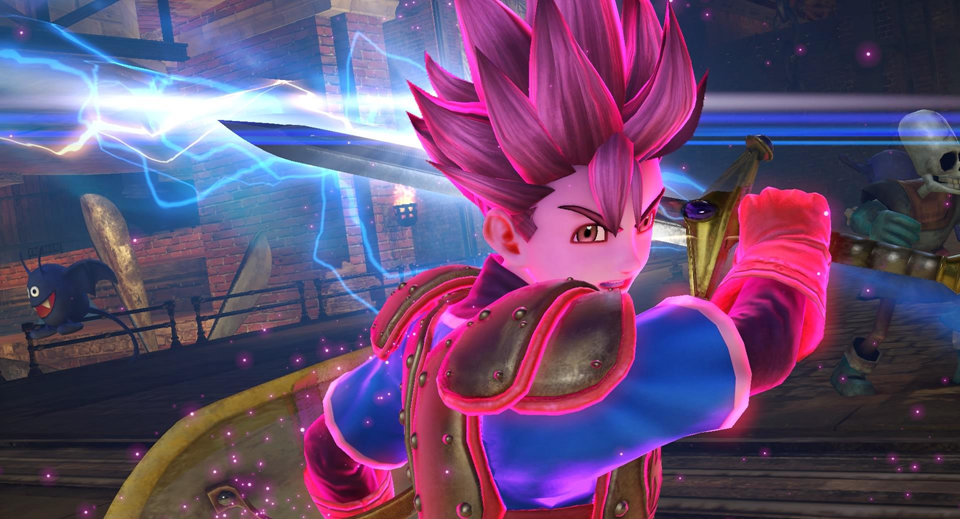 One of the biggest drawing points to Dragon Quest has always been the consistency that the series has drawn from over the years. While a lot of others constantly try and strive for something new, Dragon Quest has instead built up new features over time while keeping a lot of the same elements from one iteration to the next and instead slowly changing over time. Doing so has allowed for brand new but comfortable experiences allowing old time fans to feel right at home and newcomers to easily get settled with all of the refinements having been made. Using all of these features and elements from monster designs, sound effects, spells, and characters, Dragon Quest Heroes while not being a turned based JRPG still feels right at home for any fan of the series.

Things started off just like any other day within the peaceful Kingdom of Arba. Peace reigned as it always had between the Humans and the various races of Monsters until a dark cloud blotted out the sun and the monsters suddenly started to attack everyone. Taking up their swords, the Kingdom’s two Captain of the Guards Luceus and Aurora move together in order to defend their peoples and their liege. Taking control of either one of the Captains as the main character, who both have their own specialties, the tutorial stage begins and starts to teach the basic features in which separate this this experience from the rest of the Warriors series. 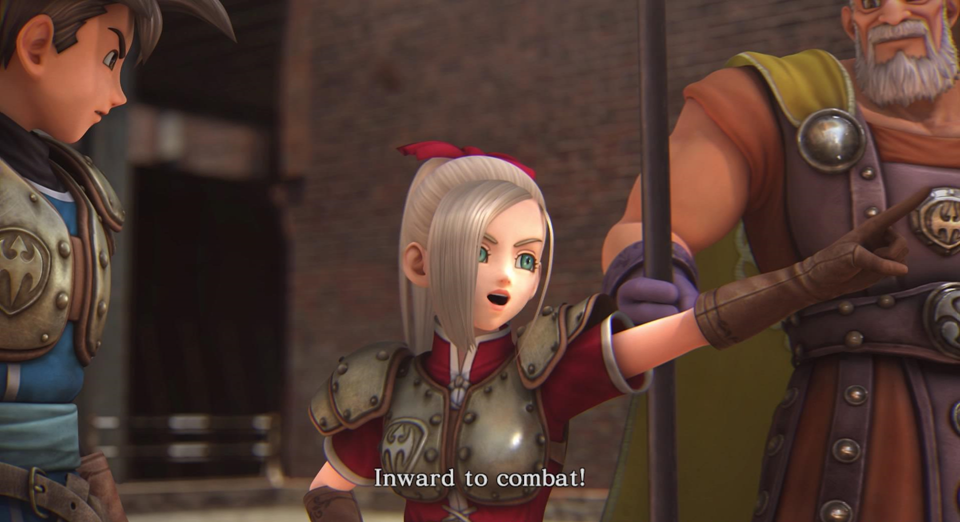 What makes Dragon Quest different from the other Warriorized series is that it takes the 1v1000 style and tones it down to more of an Action RPG instead of a massive Hack and Slash. While the Hacking and Slashing elements are still present as everything is based off the tried and true system, there’s more of an emphasis on planning out attacks and paying attention to the field of battle because falling to enemy spellcasters is a real enough threat if they aren’t taken care of immediately. Dodging, Blocking, and striking at enemies’ weaknesses are important to keep in mind as while you can hack away at an enemy’s health bar, striking their more vital points will get the job done faster as party members will love to remind you.

Enhancing the combat style are certain elements that don’t actually do anything mechanic wise, but in regards to a Dragon Quest? They make all the difference. Old school casting noises are present and if an enemy is not within the current view are the only warning you’ll get to move out of the way of an incoming spell or at least take a look to see where it is coming from as to not dodge into it. Adding in classic damage and healing bubbles, other various recognizable sound effects, and musical scores from across the various entries and the feeling of being right at home is only increased. For first timers it could take a bit of getting used to but the comfortable feel should not take long to adjust to. 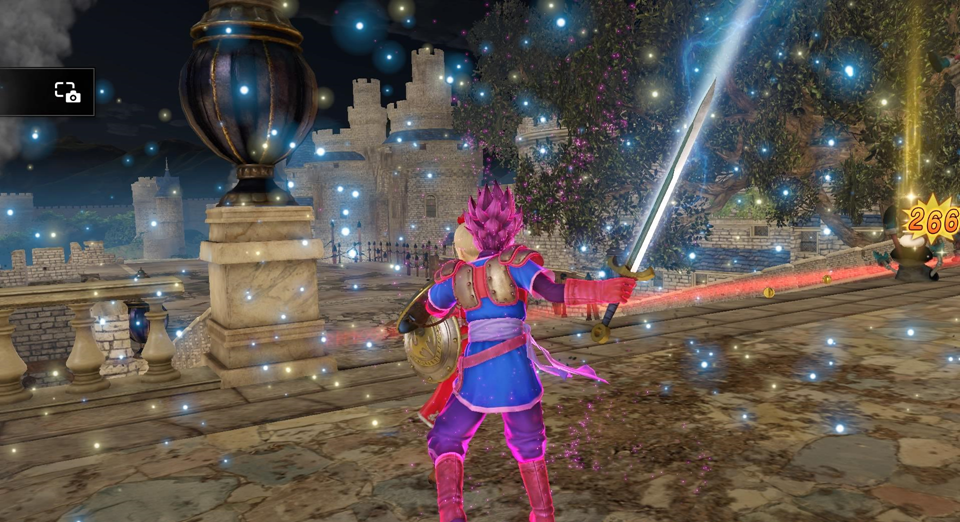 Further distinguishing characters from each other, beyond than their basic move sets and styles in battle, are skills and abilities that can be acquired by spending skill points in the options menu from within the main hub. Options for these are divided into four separate categories in which some are “shared” while others are unique to the character. The reason shared is in quotations is that these options consist of additional points of strength, hit points, alongside mana and others resistances which are the same for every character. The rest of the options are abilities and upgrades that only that particular character can learn. Careful consideration at times as to what should be learnt next is never a bad idea as only a certain amount of points are gained on a level up. If a “mistake” has been made then it’s a simple trip to the church in order to restore a character’s skills for the simple cost of gold which could be the difference between new equipment or proper distribution of skills for your play style.

One thing that bothered me early enough on was the fact that your party could not split up in battle. This did not make much sense to me as there were four of you to rain RPG goodness and destruction over the forces of “evil”. At all times three party members will be alongside the currently controlled character in which all four are chosen from inside the hub. The reason for not being able to split off finally made sense a few missions in as to why they couldn’t be ordered like in a Samurai game to go reign destruction elsewhere. Dragon Quest Heroes uses Coins in which monsters will drop when defeated that allows for them to be re-summoned back into battle but as part of your forces in what essentially becomes a Tower Defense style of gameplay at certain points in time. 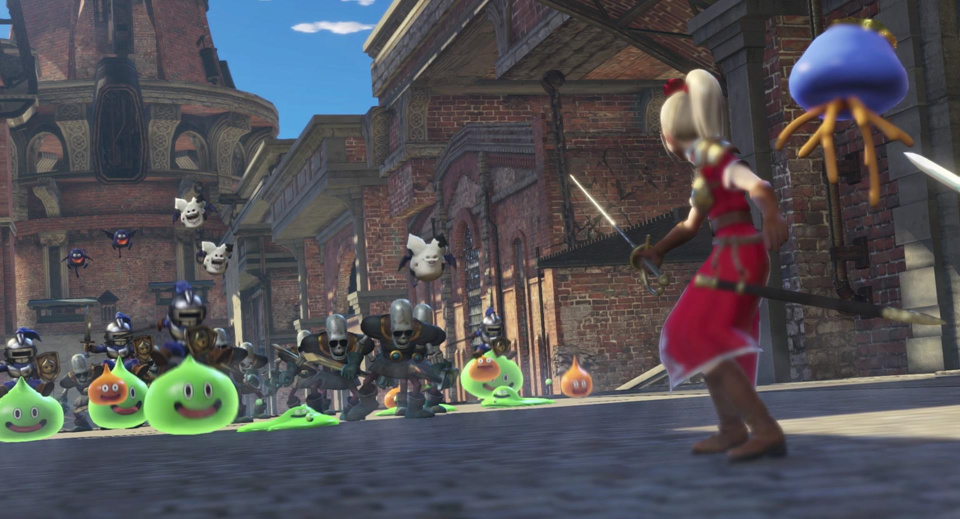 The coin system is strategic in its build as the party only has access to six coins slots in which monsters can be collected and used until quests for upgrades to this coins carrier can be taken later. Each monster type has a size that must be taken into consideration when planning out a defensive strategy if one is indeed needed. At times when there’s no reason to be defensive then using them offensively is more than easily done. The greatest part of this design is that most monster’s coin slots are representative or not only their size, but their width. A Skeleton would be one while a Dracky (magic casting bat) would be two because of the wing span while finally a golem would be three as it’s freaking huge! Mixing and matching according to what is required can be tricky at times which leads into the next set of considerations. Which monster types do you chose?

Coins come in two separate formats. The Golden coins are monsters that act as sentries and will only move from that spot to attack an enemy that comes in close. Silver coins however are monsters that instead perform a single action and then leave such as healing, raising tension (which is akin to the Burst Mode in Gundam and Rage Mode in Samurai Warriors), or laying their own level of smackdown for whoever was unfortunate enough to be in the way. With all of these options in mind, finally we come to what to do once we already have all the coins we can carry. If the coin slots are full, picking up a Golden coin of a variety already placed upon the field will heal that monster allowing them to continue on for a while longer especially if their health was getting low. 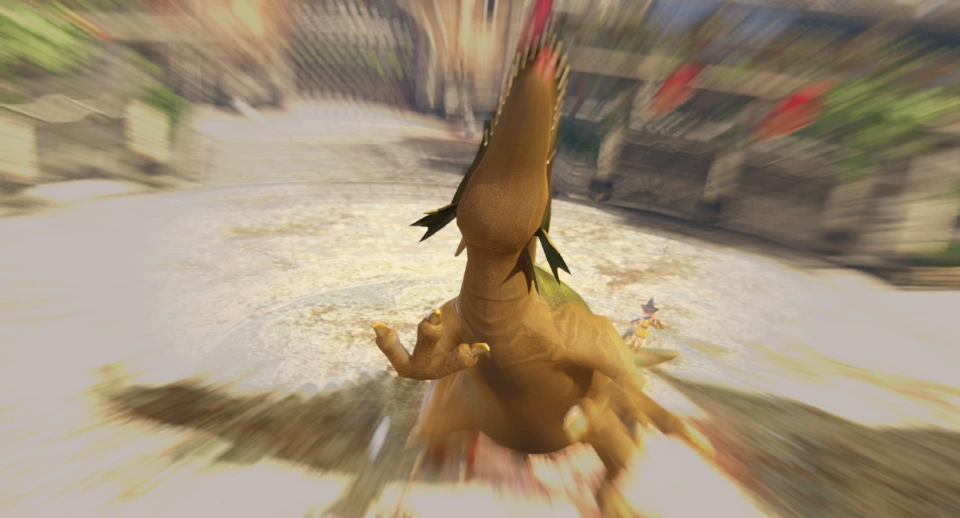 Dragon Quest Heroes: The World Tree’s Woe and the Blight Below is not only a great addition to the Warriors entries, but it’s also a great entry into the realm of Dragon Quest with its new ideas and wonderful characters. With all of the gameplay elements creating a new experience from what we’ve come to love about a Warriors game, it is only ever made better by the a lighthearted and even at times funny story in the face of worldwide destruction.