comments Share
You are reading
Else Heart.Break() – PC Review

Moving away is never an easy thing to do. Pack everything up, hope that all your stuff makes it in one piece, say goodbye to those that love you and that you’ll miss when you’re gone. Apparently though, moving away for Sebastian is none of these as he just packs his bag the night before after getting a phone call offering him a job that he can’t pass up with his over lacking repertoire of skills and experience. Leaving his parents for a new place in order to sell soda for a company called Wellspring, Sebastian arrives at his destination and what happens next is all up to you in this Point and Click Adventure of Else Heart.Break(). 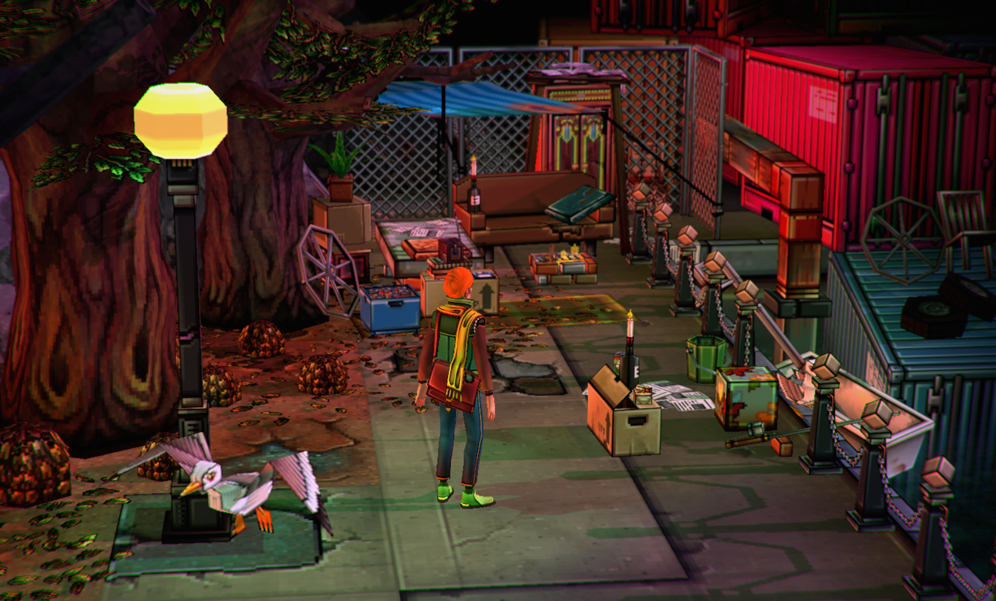 Else Heart.Break() is something quite different than anything that I’ve honestly ever had my hands on. Open Worlds are something that are still somewhat of a mystery to me. Generally I much rather have either set or semi-set goals in place that allow for side-questing and exploration while still always having a main objective ahead. Once Sebastian arrives to this new town and disembarks from the boat, everything is simply set into your hands. Where do you go? What do you do? Or when do you do it? It’s all up to you. Guiding Sebastian from the boat in search for the hotel and the room that his new employer stated that they were taking care of, we go about exploring our new surroundings looking for this building to finally get out of the rain.

Sebastian’s tale is an interesting one as nothing is ever forced upon him. The first day in town after awakening from sleep and heading down to the hotel lobby, the manager/owner pulls him aside and let’s us know what someone came by for him. Who was this person? She doesn’t know. What do they look like? She doesn’t remember. What did they want? It wasn’t important enough for her to stress about the details. So she didn’t. Lacking any and all detail, we set off from the hotel in search for “someone” that was looking for us. Why people ask? We wish we knew. Oh right! We also need to find the person from Wellspring in order to start working. What was their name? Apparently it wasn’t important and it’s up to you to find them as well. This is not a small town to look through…

It is within these small details that a good portion of Else Heart.Break() shines. There are no real limitations as to where Sebastian can move and explore. Yes there will be locked doors but eventually there will be ways to get past this such as keys, passcodes, or simply passing over a cigarette to a nicotine deprived store clerk. Walking through the streets is simple enough with a single click to walk and a double click to run. Talking to people, introducing yourself, making friends, making clients, all of these depend on the dialog options that are chosen. It wasn’t until a few in game days later that I started to stumble onto something interesting that would lead events further along. 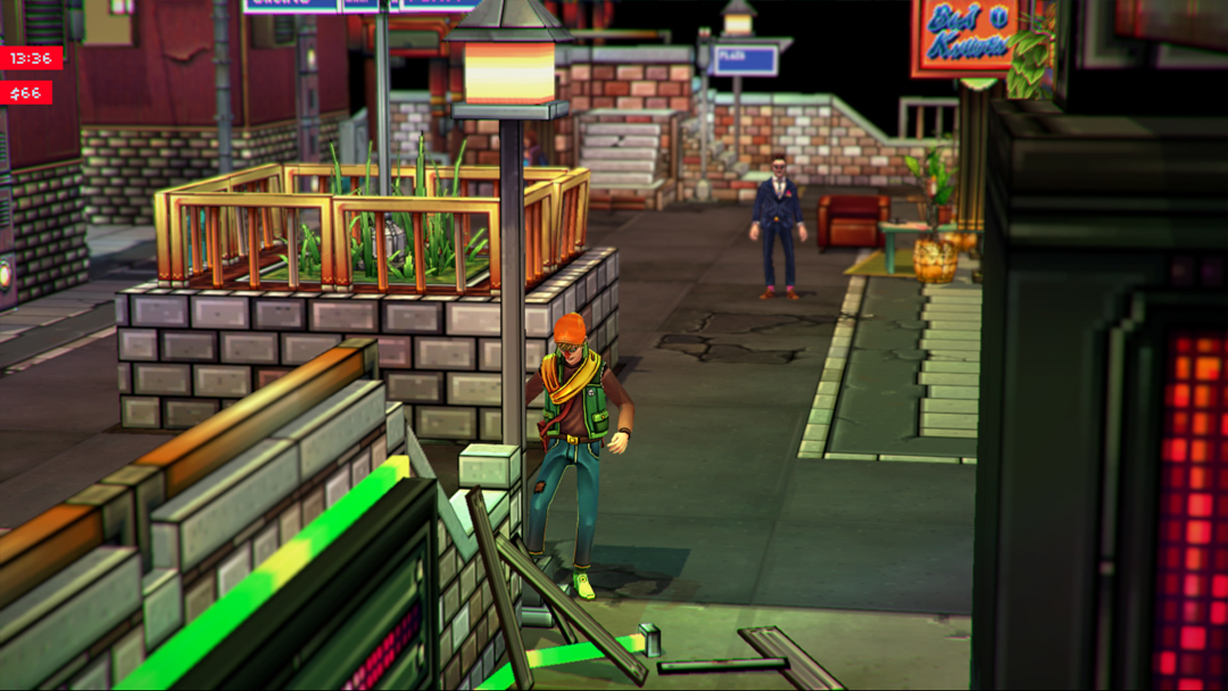 This was a freedom that took a while in order to get used to. Being able to go to sleep at night when you wanted to, “work” when you wanted to, or socialize when you wanted to, all felt rather strange as there was never any push to actually perform these actions. While it would be a good idea to make your way into bed after a certain amount of hours because exhaustion will naturally settle in and running will no longer be an option, there’s never any force behind the decision truly creating a free experience that allowed for things to be taken quite literally are your own pace.

Going out for a beer, dancing the night away, chilling on a rooftop terrace, and more are just as easily chosen ways to pass the time in which days could honestly come and go in certain cases without much “actually” being done. Talking with people is simple as Sebastien needs only walk up to them and say “hey”, “yo”, “nice weather that we are having!”. Conversation strings will stem themselves along depending on what knowledge Sebastien already knows or not. Sometimes knowing just a single detail is enough in order to move everyone else that you talk to along in a progressing direction. That or piss them off while trying to find out stuff and they never talk to you again.

HeartElse.Break() contains a feeling of days easily passing on end that could almost be accounted at times for the speed in which time flows in-game instead of enjoyment of exploration and discovery. Sometimes this speed is much too fast in order to be able to do what you set out to do within a certain amount of time. For example, the time that it just took you to read that last sentence would honestly have been a good thirty some odd in game minutes making it take up to two hours at times to simply walk from the strip mall over to the bar which in our actual time would be a grand total of a minute. Once you’ve gotten used to the speed in which time moves it becomes much less of an issue as it can be compensated for. In certain cases however, there could be a fear of running out of time or not making it to a date with friends when you said you would meet them because of the sheer time it can take to walk around before knowing what leads to what. 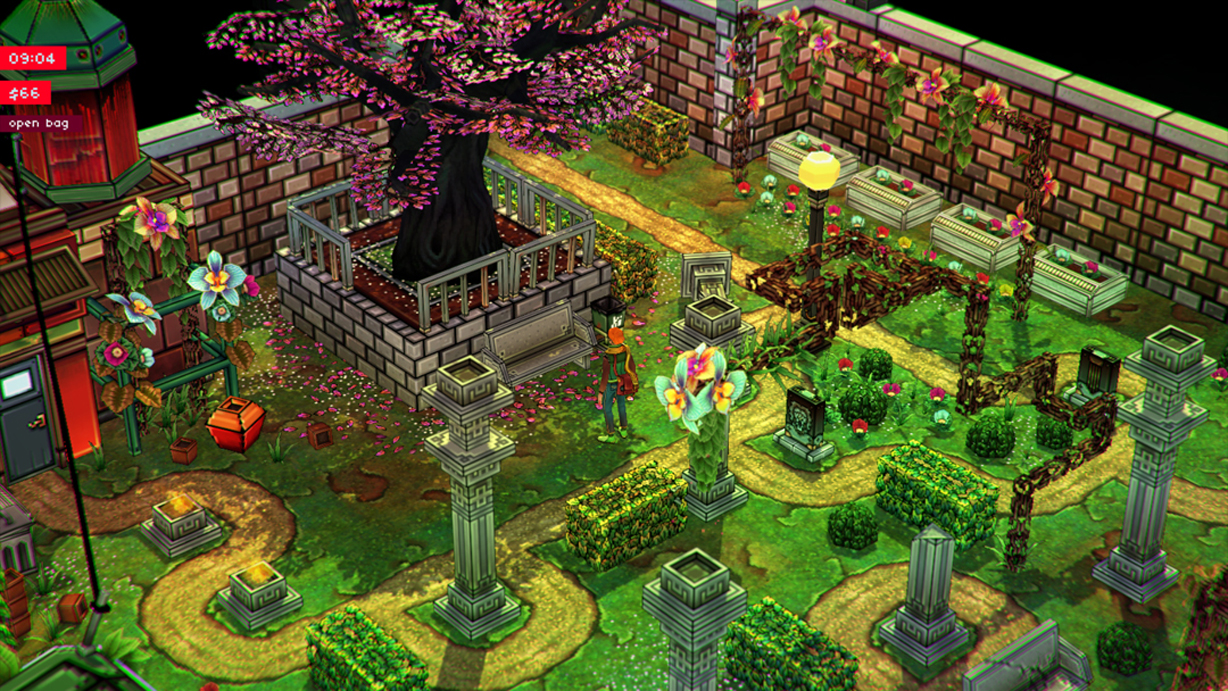 Exploring the town itself can take a bit to get used to. While being able to pick up a handy map from the information office is useful, sadly there is no way in which to actually tell where you are on the map as it is just a piece of paper. Short of looking around your surroundings and figuring out where they themselves are located upon this life saving piece of paper, there’s no other real way in order to find yourself while exploring the city. Having gone to new cities I can say that this helps emulate how a real life exploration could be having to learn the landmarks for yourself or ask directions. Real life aside however, it can be rather frustrating as the clock ticks by making you miss your prior engagements or simply taking six hours to make it home from the club in the mines to your hotel room because you misread the street signs.

Now while exploring, chilling, hanging, selling stuff, or simply bumming around is fun and all, playing with computers is where the real fun is. Or what should be said and noted is that where the fun can be as a bit of actual programming is required in order to do so at times. If no programming is known then there’s plenty of help that can be found if Sebastian looks around hard enough for a device that will help perform these actions. Thankfully there is someone willing to point you in the right direction if you simply ask them about it. The most interesting part of using computers and hacking was that actual typing had to be performed and it wasn’t like some other experiences where an icon is moved through a math like a mouse through a maze to obtain its cheese. Having actually gone this route simply added to the charm of the system as it adds one more layer on top of the already well designed dialog options.

HeartElse.Break() is something really different and well thought out addition to the Point and Click style of Adventure gaming. While it may have some issues that can get in the way until the city layout is memorized or at least navigable without fully getting lost or in constant need to reference a map, the indirect storytelling approach more than makes up for it with the sense of accomplishment that comes along with it.