comments Share
You are reading
Hunt the Wumpus – Retro Reflections

Seeing as that Halloween is fast coming up on us, I wanted to do something other than just talk about recent games that came out designed to scare players into submission. I wanted to reflect on what was my first horror game ever, Hunt the Wumpus. 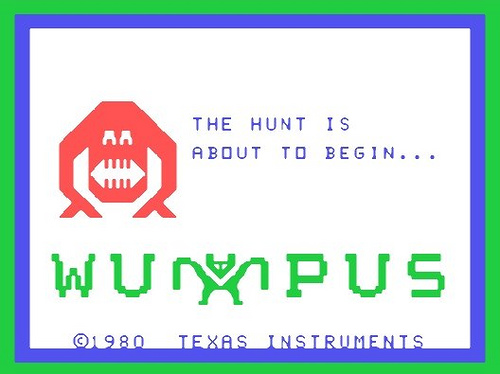 This is not the first time I have reflected back on my first video game console, the TI99/4a. I got this guy for Christmas when I was four years old, and while Hunt the Wumpus was not among the first titles I received on the console, I did have it by the time I was six. While this is more puzzle game than horror, let me tell you that as a six year old kid, playing this thing with the sound up and the lights turned down in the early evening, this was pretty scary stuff.

The idea behind this game, which actually had its origins back in the 70’s, is that you have assumed the role of a hunter looking to take down the dreaded Wumpus. With only one arrow at your disposal, your hunter ventures out to try and track down and kill this beast. Different difficulty levels impact the number of possible traps and rooms that you are working with. Lower difficulty leads to a smaller number of rooms with simpler connections. Higher difficulty means you have a ton of rooms to work through, and you are for more likely to run into a problem. Hunt the Wumpus actually started as a text-based game. It would use lines like “I smell a wumpus” or “I feel a draft” to warn you of impending doom if you moved into a room that was close to/adjacent to one of these threats. Falling into a pit or walking into the wumpus’ den spells instant death. There are also bats that can be run into that will pick you up and randomly drop you off somewhere else on the map. That can prove helpful at times, but more often than not it is deadly, because you are now in a standalone room with no ‘context’.

What do I mean by context? Well, usually these dangerous rooms have illustrations to point out that you might be in danger. Greenish slime indicates a nearby pit and blood spots on the ground mean the wumpus is nearby – within a couple of rooms. If you can see the blood trails all around, you have an idea which direction your prey is in. Once you are confident that you are adjacent to the wumpus, you fire your arrow into that room. If you were correct, you win! If you are wrong? well, you see the same thing you would have had you stumbled into the wumpus’ room – a big set of teeth and some loud music declaring that you had lost. 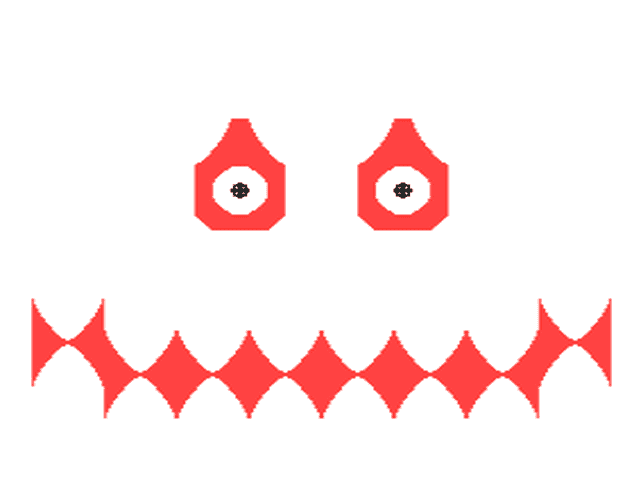 As you walk about, a new room will be uncovered. Some of these have straight, easy connections, others have rounded, bending paths that can lead you into trouble as well. Sometimes a path would literally lead nowhere as you exited the west side of a room only to have the pipe round back to the north and bring you back where you started. Each and every step felt important however, and if you stumbled onto slime or a blood spot? Well that was when you had to pick your next step most carefully.

With its randomized dungeons, jarring game over screen and emphasis on hunting something in a dangerous environment, Hunt the Wumpus might not be a traditional horror title for most people, but it was a tense experience for me as a kid and one that I enjoyed playing with my father. His reasoning was obviously more advanced than mine, so Hunt the Wumpus was one of those titles that he traditionally was better at than I was for the TI99/4a, unlike some of the more twitch-based games like Munchman.

I would go so far as to say Hunt the Wumpus still holds up well enough today, with variants of it available in emulated format or in derivative versions available on free Flash game sites. Because it is a puzzle game, it actually provides a solid challenge that did not rely on fancy graphics even back then. Visually it was a simpler game than many for its time, but the hunt itself was always engaging. Below I found a video of someone playing the game on YouTube, that should give you a good idea of what the gameplay was like.