Another season of NBA action has descended upon us, and NBA 2K16 does a commendable job of simulating the sport while taking a few chances and doing something new along the way. While not everything pans out perfectly, this latest iteration in the series is still a solid game. 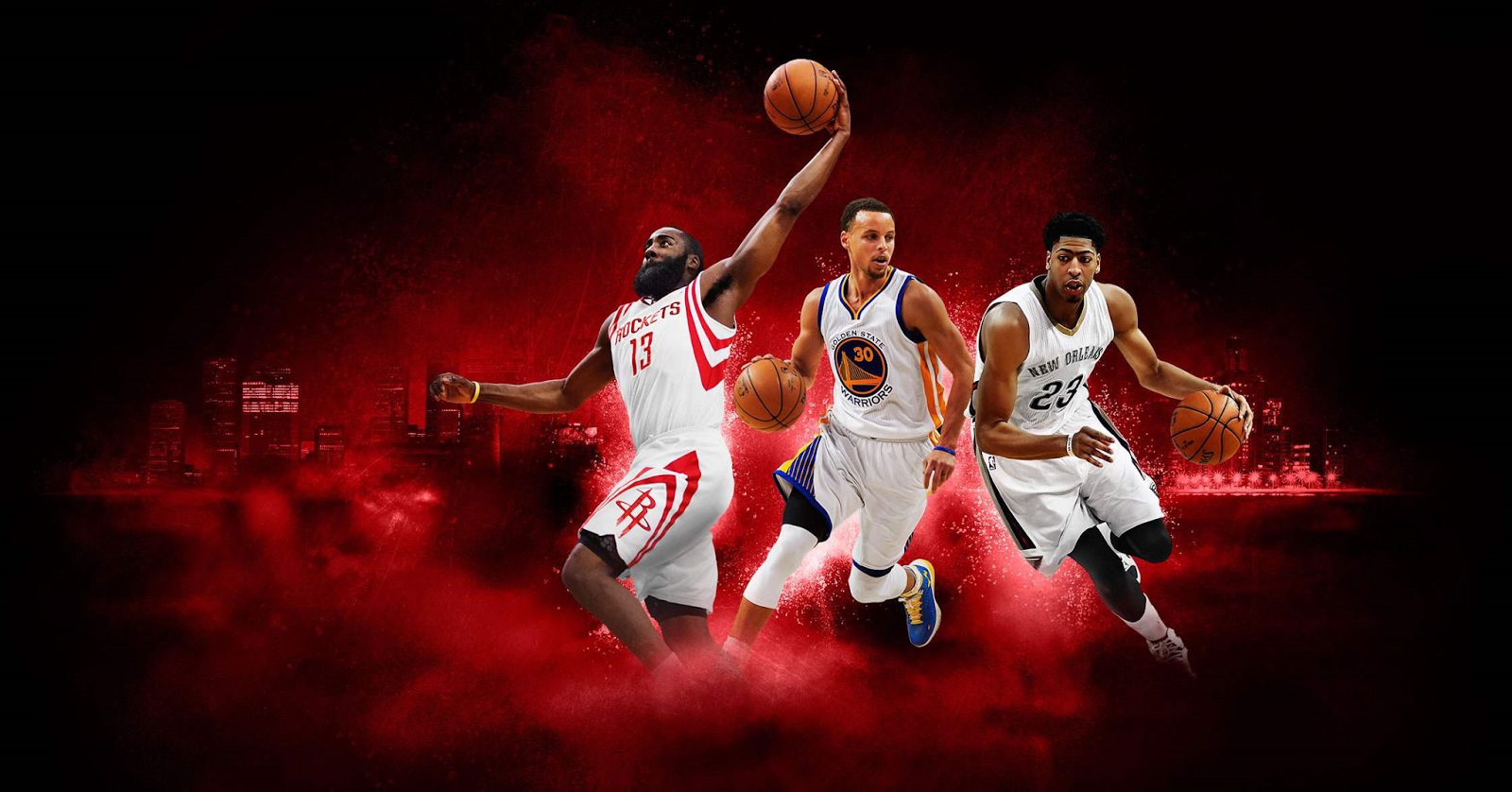 The 2K series has been ahead of NBA Live for some time, and this year that pattern remains the same. On the one hand, NBA Live fared far better this season, while NBA 2K16 remains very similar to the prior games. While the 2K series is still well ahead of its competition, it will be interesting to see if the NBA Live series can continue to improve its game next year.

Probably the most notable change to the franchise is the new take on the MyPLAYER mode. This has always been my favorite mode, and that holds true again with this year’s release. You create a player and you are tasked with improving him game by game, year by year in the pursuit of the Hall of Fame. However, things get off to a very different start right off of the bat in this year’s release.

Your character, Frequency Vibrations (yes, that is his name), is a high school phenom the likes of which the world has not seen since Lebron James. Everyone knows who Freq (pronounced Freak) is, as his family and friends are introduced off of the court. Meanwhile you guide him through a trio of games on his way to the state championships. You meet Freq’s fraternal twin sister, his doting parents, and trouble making best friend on the path to getting recruited by several different universities. Here you listen to their sales pitches and eventually choose which one you will attend. 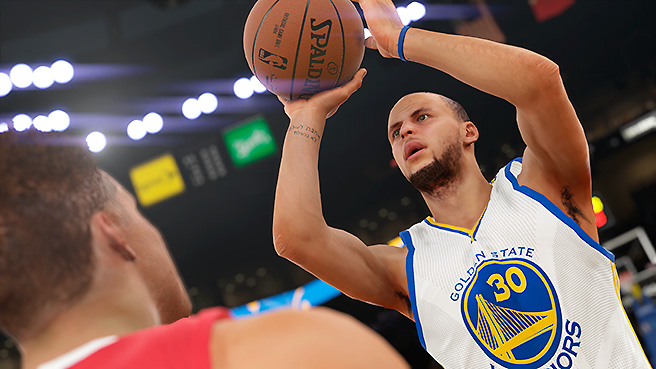 Next you are thrust into a handful of collegiate games that can culminate in a trip to the NCAA championship. During the loading screens between games, little infographics pop up on the screen, trying to tell you how people feel Freq is doing. He goes from surefire number one pick to mid twenties to late lottery based on… I am guessing performance? I really do not know what magical formula gets used on all of this portion as I only played through this opening story one time, but it did not make sense. For example, I went from being the consensus top pick to outside of the lottery based on… a thirty point, fifteen board and five blocks outing? So yeah, this part of things is a bit shaky.

Meanwhile more interactions take place and your character picks up a girlfriend along the way. The story is written and directed by Spike Lee, which makes the similarities to this title and He Got Game all the more pronounced. There are a couple of Jesus Shuttlesworth references and you even acquire Dom Pagnotti as your character’s agent. Poor kid growing up in Brooklyn, raised by a pair of loving parents, trouble finding his best friend on a regular basis – these are the primary elements that serve as motivation. I will not spoil what happens when your character makes the big time, but let’s just say that my rookie season did not play out at all like I would have expected or hoped. Instead of playing through the season and fighting for Rookie of the Year or All-Rookie honors, you wind up only playing a select eight games as the story plays out around your character between games.

My major complaint about this mode is not that they tried to tell a story, and I have no problem with Spike Lee and the overly familiar characters and narrative – it is that the mode is hashtagged with #BeTheStory. The problem is? It never feels like my story. The voice acting is all well and good, and there are some genuinely interesting moments to the tale but the only moment you have control over anything is when you pick your college. It leads to a very short but mostly cosmetic scene that turned into the high point for me, because it was the one time I did something that definitively mattered. The rest of the time, I felt like I was just along for the ride. 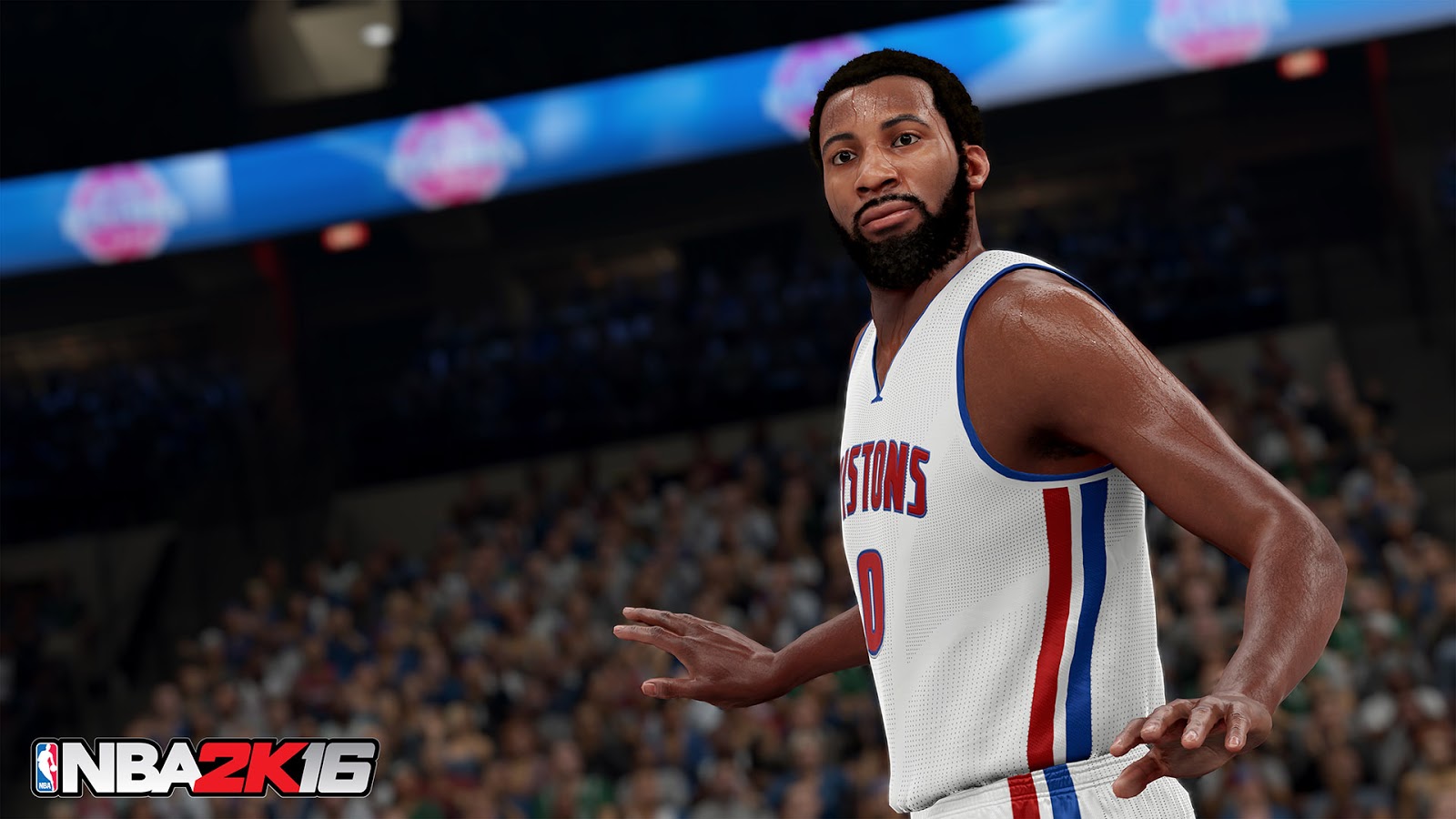 Thankfully after that disastrous rookie season, your career mode goes back to being the solid experience that the series has always allowed it to be. While your rookie year has been effectively flushed down the toilet, you can now focus on improving your stats by earning credits and doing things like being a good teammate (setting screens, making good passes), performing well in the game (points and rebounds certainly help) and making your coach happy (during some games, your coach will ask you to do something vague like ‘protect the paint’ – so get blocks and rebounds). You can then spend your hard earned currency on character upgrades that let you mold your player to your liking.

There are plenty of other notable modes in this game, and that has always been one of the series’ greatest strengths. From online play, to acting as the GM for a franchise, to a sort of fantasy basketball/card collection mode and more – NBA 2K16 does not lack for options. Thankfully the presentation is as slick as it has ever been, and really is the bar other sports titles should strive for when it comes to not only the visuals, but the audio as well. Players look and move wonderfully the majority of the time, and the announcers both before and during the game do a great job of offering excellent commentary that fits the context of the team and flow of the game far more often than not.

As for the gameplay itself, by and large NBA 2K16 delivers an excellent experience. Rebounding and playing defense – especially in the post – feels weighty. It just feels like powerful, athletic players are fighting one another for position under the boards. Fouls sure can look like they hurt. A perfectly time shot swishes through the net perfectly. All of the basics are in place, even if the controls can be a little dicey at times. What do I mean by that? Most of the game feels intuitive, with sharp passing, shooting and defense. One thing I like better about the controls in NBA Live is the way dribble moves are tied to the right stick, yet NBA 2K insists on keeping that tied to shooting. You can also use a button – something I almost always prefer to do because the timing just feels more natural after nearly three decades of basketball games using buttons to time shots. While I actually like the post play for the most part – I use a center in my career mode after all – sometimes that post play can get a bit ‘sticky.’

What I mean by that is once the player gets locked into a post-up animation, it can be hard to get them out of it. I understand that on a basic level. Your weight is often pushing back, you might be on your heels slightly, but you have to worry about the three second violation in the pant. Getting detangled from your opponent and out of the paint is a bit of a chore at times. It feels clumsy and awkward, and I pick up the three second violation more than I feel like I should. Again, I realize post play is often a tangle of limbs and not as pretty and smooth as perimeter play, but I also have played enough basketball over the years to know that half a second into a post-up, I shouldn’t have to ‘turbo’ my way into a random direction to get back out of the paint. This is really my biggest gameplay gripe though – by and large the rest of the game moves and feels as good as any sports title on the market.

On the technical side, I already mentioned the gorgeous graphics and excellent sound. NBA Live 16 was better, but plagued with some annoying bugs right out of the gates. There are a couple of performance issues with NBA 2K16 that are worth mentioning, however. There are very long load times leading into and out of the games and modes, but worse than that are the pauses between quarters or during timeouts. It does not happen all of the time, but there are moments in almost every game – especially in the career mode it seems – where the game just seems to be churning and thinking behind the scenes, leading to lengthy pauses of anywhere from five seconds to twenty seconds where the players are just standing around and nothing is happening. I suspect the game is just loading or catching up on something, but they break the otherwise solid immersion in the game.

I would argue that NBA 2K16 is the most polished sports game on the market today. It has not taken great strides however, from the previous couple of iterations. The career mode takes some chances, and I like the willingness to do so. It feels like there is room to grow this out and make things even more interesting, but unfortunately this year’s execution felt somewhat lacking. That is a disappointing turn of events given how heavily it was touted and the somewhat poor initial impression it left me of my favorite game mode. Thankfully everything rounded back into form afterwards and NBA 2K16 on the whole is still a great deal of fun.