Combat is turn-based, yet speedy. Those things do not normally go together, but then Skyshine’s BEDLAM is not your typical game, both for better and for worse. It is an incredibly difficult game that can be both rewarding and frustrating in equal measures and a memorable experience – though sometimes for the wrong reasons. 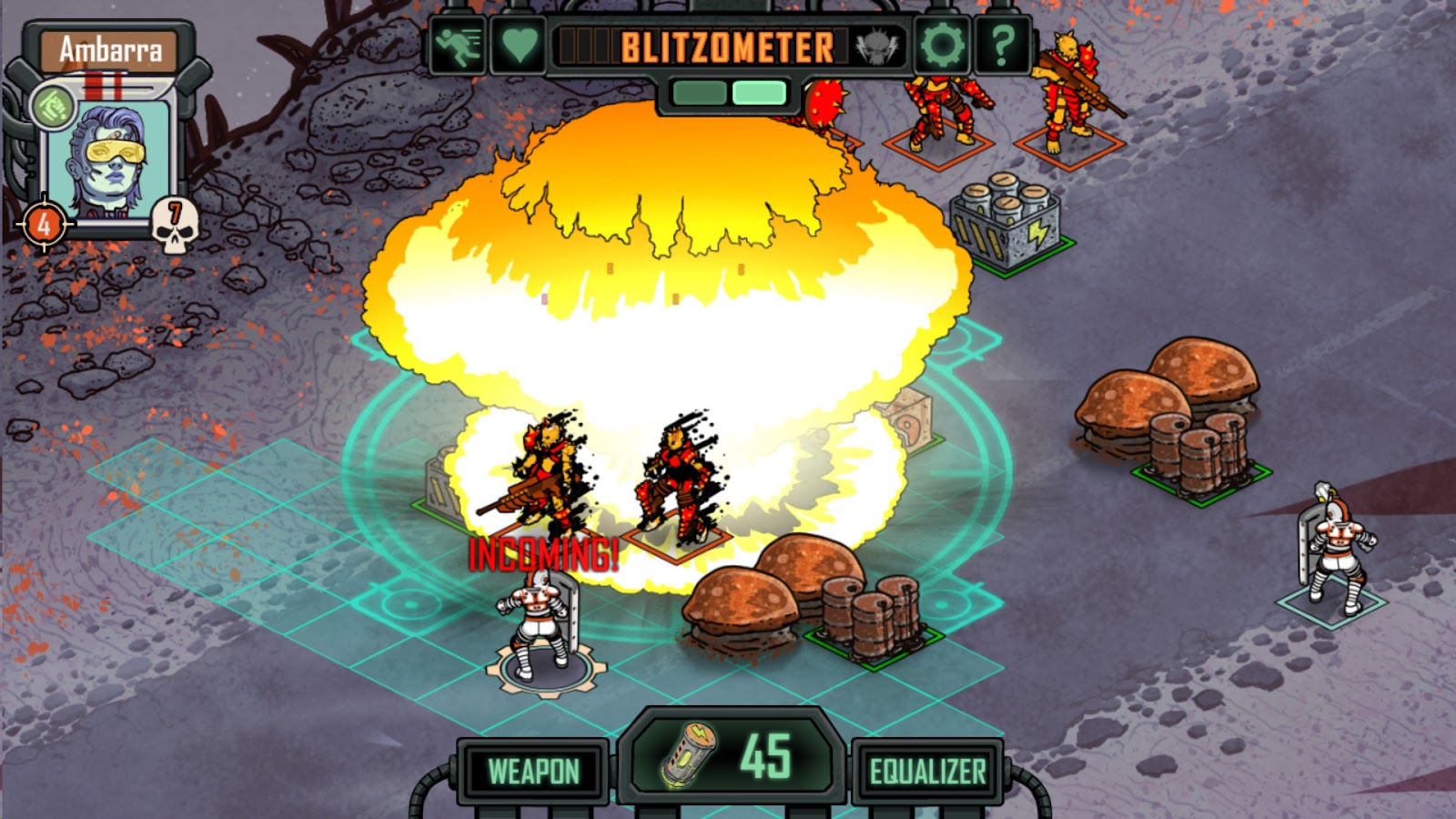 To be fair, any game that works in the name ‘roguelike’ is probably going to be a challenge, and I am okay with that. I enjoy the genre a great deal by and large, so when I heard RPG/strategy/roguelike elements, I thought perhaps I would be getting something like the excellent The Guided Fate Paradox or The Awakened Fate Ultimatum games. I think perhaps, that set the bar too high in my head, as Skyshine’s BEDLAM is solid enough, but never manages to reach the lofty heights of either of those two games.

Visually, BEDLAM is outstanding. It looks sort of what I would expect a Borderlands strategy game to look like. Characters are colorful, well-animated and distinctive. The environments are equally engaging and the four different factions are well represented. Mutants, robots, cyborgs and marauders are visually distinctive and execute quite differently on the battlefield.

As for the combat, the way the actions are spread out so that you can only perform two per team per turn feels very restrictive. You can move one character while another shoots, or have one character be very aggressive and attack twice It is a fairly simple system that is easy for newcomers to pick up, but over time it begins to feel too restrictive. What starts off as approachable eventually winds up becoming shallow. Since so much of your time is spent in combat, this can grow quite frustrating. The combat, despite its simplicity, can feel cheap and frustrating at times as well. After all, you are leading your specific band through multiple encounters. The computer just plugs and plays with new teams for you combat each time. 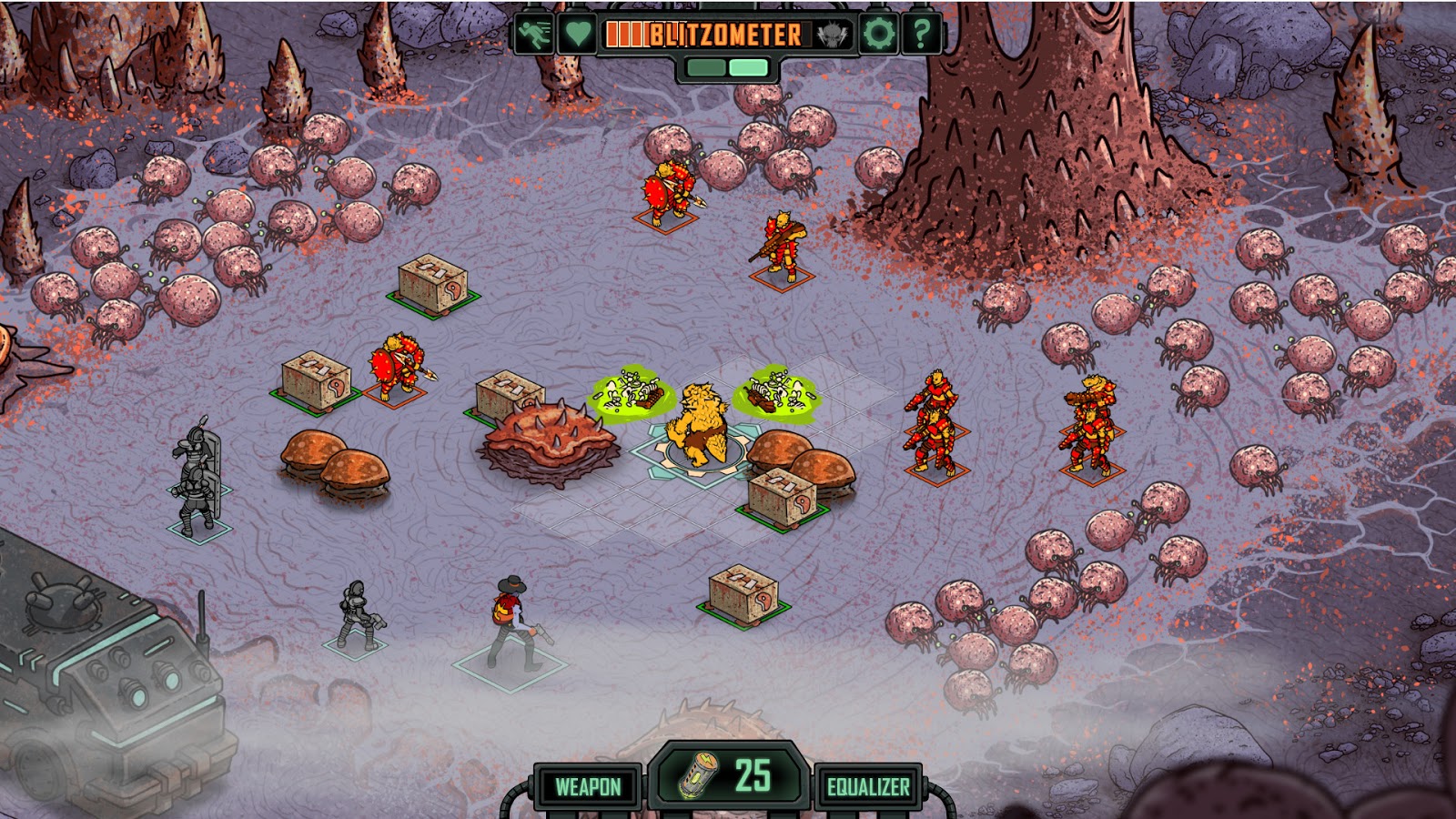 This where the roguelike elements can become frustrating because some of the situations you are put into simply come across as unfair and you just learn to not grow too attached to any of your units – because eventually they will die. Combat is a slowly escalating thing as early on you are dealing with say, a handful of easily managed mutants, but by the end of the game you are dealing with a much larger horde of them. That was another small concern – that while the base combat already feels somewhat shallow, encounters (outside of the overpowered elites) start to have a sense of sameness from one encounter to another. Mutants! Then… more mutants! But the combat scenarios just did not evolve a whole lot over the course of the game.

One interesting aspect to the combat is the food, power cells and fuel found in the arena. You will want to pick these up because growing low on resources is another concern. To the game’s credit, this does create an interesting internal conflict for you to balance. Do you risk the well-being of your soldiers to help provide supplies for your populace? Remember, you only have two actions per turn, so sprinting over to pick up a needed resource means you are likely setting your character up to get blasted away. You can bring in up to six combatants, making battles much easier – but this in turn reduces your resources. Again there is that perpetual balancing act that has you doing as much as you can with as little as you can, and sometimes you just sell yourself short and lose trying to operate on as few combatants as possible.

I think that BEDLAM would have benefited from a more
conventional turn-based tactical system in the end. There are some
pretty visuals and some cool ideas at play here, but here it almost
feels more like a chess or puzzle game because of how fragile units are. Both types of games are ones I enjoy, but that was not what I thought I was signing up for here with this title. 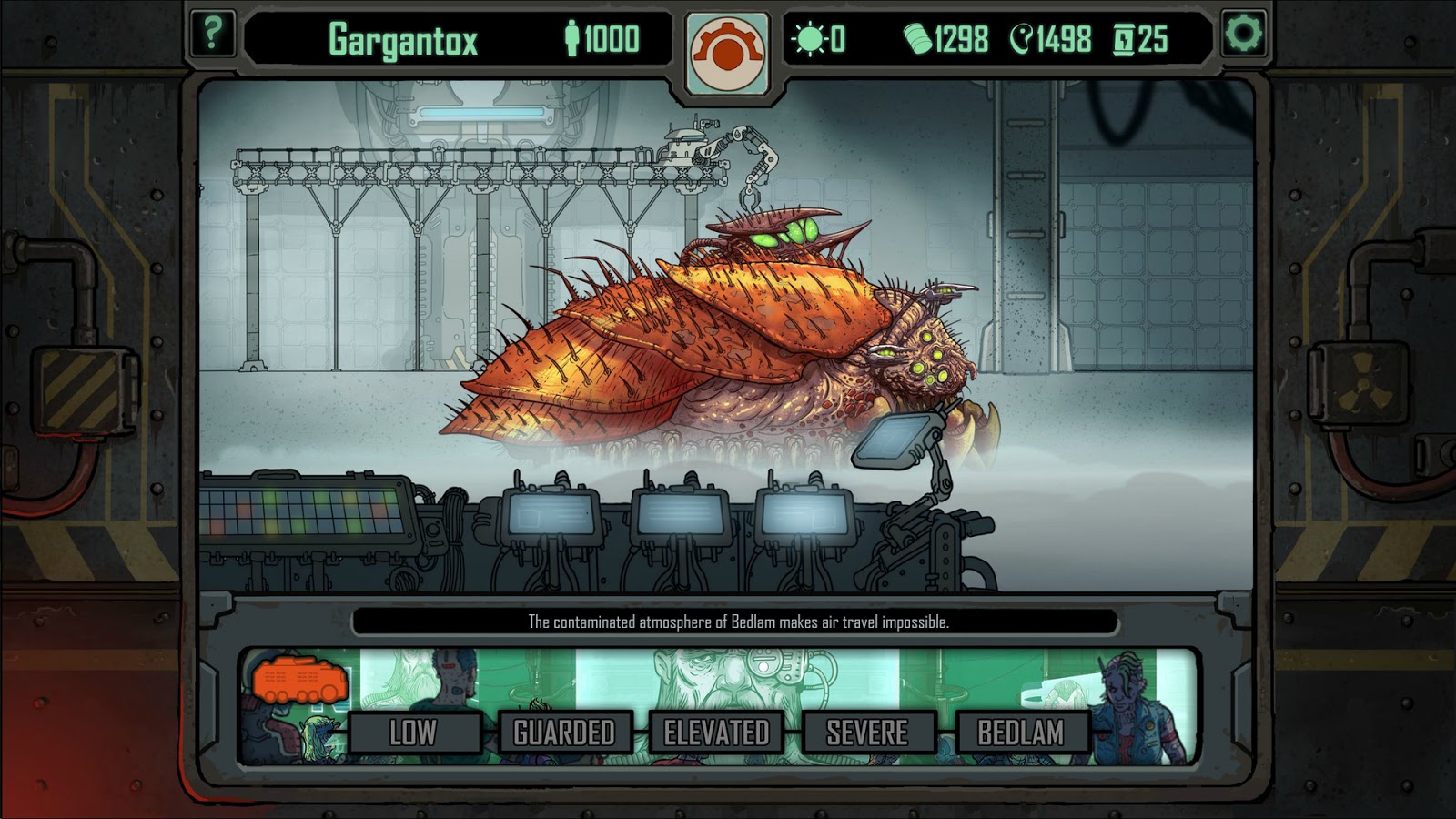 You move around the map from one dangerous location to another. I do wish the story had a bit more meat to it as well. Between my detachment for specific characters and the way the story just sort of gives a distant narration of what is happening, I never really felt like I was connected to the events. I was playing a game. You plot your course through Bedlam trying to balance potential encounters against needs like fuel along the way.

There are some balance issues in BEDLAM to consider as well. Elite enemies are just… well, regular fights have the potential to be frustrating. Elite battles almost certainly guarantee frustration. Power cells are just a bit too important for my tastes as well. They are needed for using powerful techniques during battle, so you are of course tempted to use them. However, in doing so, you will be shorting your people since power cells help to manage food and fuel efficiency. I do enjoy the idea of having to make decisions, but far too often it just feels like you are being punished with no-win situations.

My other gripe is just that the game is fairly short. I think my first time through only took a handful of hours, and the ending for all of that work fell a bit flat. For those familiar with Faster Than Light or The Banner Saga, there will be a sense of familiarity to Skyshine’s BEDLAM. It is not as good as either one of those two games, however. If you like resource management and tough choices, there is plenty here to like as well. The biggest issues are the sense of punishment felt throughout almost every decision and the rough edges on the combat system that make some stretches of the game feel more like a chore than a fun gaming experience.