Castlevania: Curse of Darkness is a member of a long line of games that started on Nintendo Entertainment System during the eighties. The hero was an intrepid hunter of supernatural threats who set off to find and defeat Dracula. These games, combining hack’n’slash action with platform negotiation and exploration, were loved by many people; unfortunately I haven’t tried any of them. Besides Curse of Darkness, the only Castlevania game I have played is Chronicles on PlayStation. 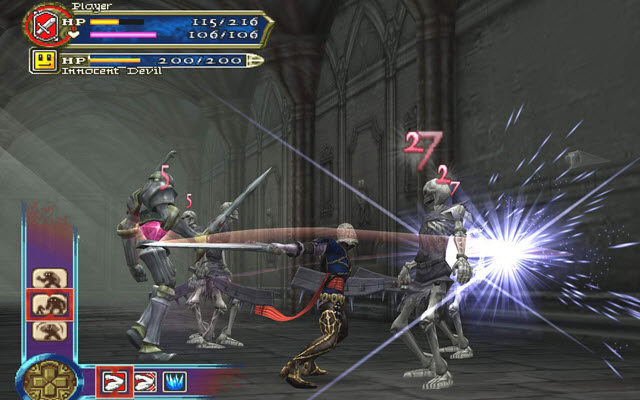 The story is about a tragic hero, Hector, chasing Isaac, a man who served Dracula and is responsible for the death of his beloved wife. Strangely, Isaac doesn’t kill Hector immediately but lets him regain his powers instead, as part of a greater scheme. A few other characters appear too: a highly suspicious priest, an elegant guy dressed like a count, who asks Hector not to run after Isaac, and a beautiful witch. Though the plot is linear and poor, I liked the hero’s noble manners.

First, you enter a castle, where you deal with a cyclops, skeletons and wolves. Later, you face giants wielding iron balls, ghosts passing through walls and bone tigers charging suddenly from under the floor. Your weapons include swords, axes and spears and you perform devastating combos which strike multiple targets at once. Hector has no ranged attacks but his familiars (more about them later) cast spells. There are some role playing elements too, since the hero has various attributes (strength, luck, etc), levels up as he progresses and buys stuff from a shop.

You acquire better equipment by combining materials dropped from fallen enemies or found in chests with weapons or armor you already have or with other materials. New “formulas” are added to your book gradually, providing access to better weapons, armor and helmets. Julia’s shop sells basic items, which are appropriate for crafting, and potions, for replenishing your health or curing status ailments. The usefulness of an item is not always proportional to its rarity: “sun tears”, for example, is unique, however, after several crafting combinations, it gave me a pathetic school cap. Anyway, Hector can steal from enemies and this is the only practical way to collect a lot of money. 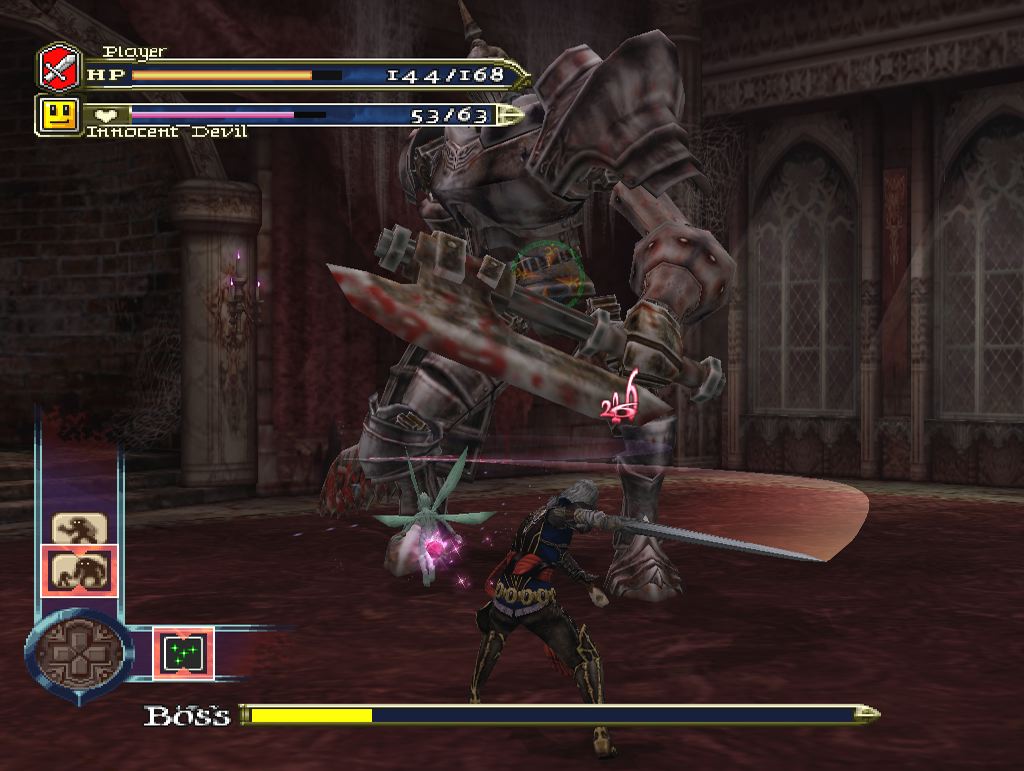 Familiars are very important. They are called “innocent devils” here, which sounds contradictory to me, and are discovered in specific rooms. There are various kinds of familiars, each one with its own appearance, strengths, weaknesses and magical abilities. They help you in combat, mainly by attacking enemies, or give you access to new areas of the game world. Familiars have an energy bar that is depleted when they get hit or cast spells and is replenished by collecting hearts left by slain monsters (in older “Castlevania” games hearts were consumed by the hero when he used his own magical abilities). They level up like Hector and when they do they acquire new skills. Their appearance evolves by gathering crystals, also dropped by killed opponents. They have three modes of control, “auto”, “manual” and “guard”. The artificial intelligence is good, so “auto” is effective. Familiars follow you everywhere, cannot be destroyed and produce shards which let you create new “i.d.s”. My favorites are the fairy, who heals huge amounts of health or opens locked chests, and a big guy who charges like a wrestler and can raise heavy doors.

Navigation is helped by a map that shows even places you have not visited yet, provided you have found the appropriate area map. A network of teleporters help you travel between stages, “magical tickets” transport you to Julia’s shop and “memorial tickets” take you to a predetermined save point. Nevertheless, if you haven’t explored everything in an area and want to go back it will take some time because Hector doesn’t run fast enough.
Something worth mentioning is the game’s resemblance to “Devil May Cry”: a hero with demonic powers, white hair, cool clothes and a huge sword, respawning monsters, leveling up, a castle. Which one is better? I would say “Devil May Cry”.

The graphics are interesting occasionally, for example in the aqueduct, with water flowing in the rooms, or the temple, with weird murals and light coming through the windows. The color palette is vibrant and changes often to suit each location. Your character’s animation is fantastic, among the best on PS2. Armor you carry doesn’t alter your appearance but you see your current weapon on your back. Enemies are well designed, especially the huge bosses, such as a shaman riding a freakish fish. The visual effects are impressive, e.g. fireballs shot by lizard men or the activation of the teleportation chambers. I wish there was more variety in the enemy design though; the last stage is full of monsters you met in previous areas. As for the last boss, he shows that Japanese artists are experts at designing villains who look both menacing and majestic (I am talking about his first form).

The sound is of high quality. All actors perform their roles well, especially the one who plays Hector; just by his initial dialogue with Isaac you can tell he is determined to have his revenge. Julia doesn’t sound very convincing, though. The sound effects for attacks and spells are good too. The music is heroic and melancholic although it loops very often; in the Baljhet Mountains it reminded me of “Shadow Hearts”. 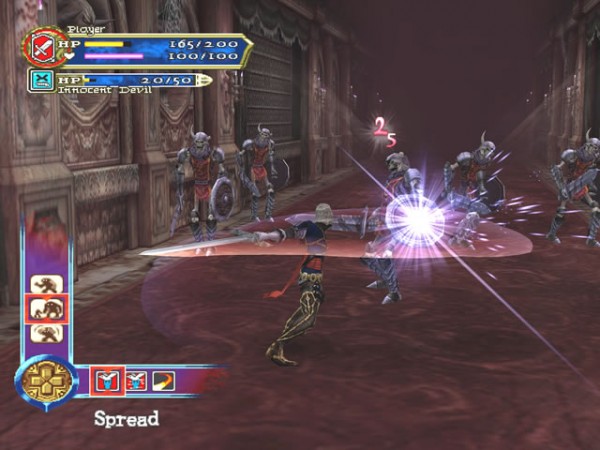 The control is spot-on. There are two buttons for slashing, one of which serves as a finisher. So, if “B” is the finisher, available combos are “A,B” or “A,A,B” etc. “X” is for jumping and “∆” orders a familiar to cast the selected magical ability (provided it is in “manual” mode). R1 is for blocking and R2 is for targeting a specific enemy, which is necessary for stealing. The directional button allows you to change the familiar’s control mode or select a magical ability. Maps point to save points and teleportation chambers; you can also put markers on them. Unfortunately, there is no in-game map, so you need to consult the map and return to the game very often (you press “select” to do this). “Start” lets you see Hector’s statistics and inventory, craft weapons and armor, change equipment, summon a new familiar (which replaces the one currently by your side) or read information about monsters you have met. It also allows you to see a familiar’s abilities and possible evolution paths. The manual contains detailed information on how to play, with nice colored pages.

The game has two important drawbacks, the level design and the difficulty. Each area consists of long corridors and large rooms that look the same, so you spend a lot of time running in places that soon get boring. Smaller areas and some platform elements or puzzles would make the experience richer. Moreover, “Curse of Darkness” lacks challenge. Enemies have slow reflexes, usually don’t deal a lot of damage and only their special attacks interrupt your moves. In addition, combos require no skill to be performed, so you can hack and slash effortlessly without bothering to block or dodge. If your health is low the fairy will restore it quickly. The only difficult thing is unlocking all areas; some of them, such as the one sealed by a group of statues, remained a mystery for me.

I finished the game in one week and even the last fight was not a problem (as long as you use the longest combo, A,A,A,A, then tap B repeatedly, making Hector swing his sword with one hand for a few seconds). The ending sequence was another dialogue, this time full of naive clichés. Two modes were unlocked, “Crazy” and “Trevor”. I thought the latter would allow me to play as Belmont but I was wrong, so I didn’t bother to continue.

“Castlevania: Curse of Darkness” has a big tradition behind it, however, the designers preferred to make something completely different. I could compare it to “Lord of the Rings: Aragorn’s Quest” because it is a hack and slash game based on a famous franchise and is very playable but I found its world to be bland and didn’t feel any accomplishment when I completed it. In fact, I was even a little tired and disappointed. 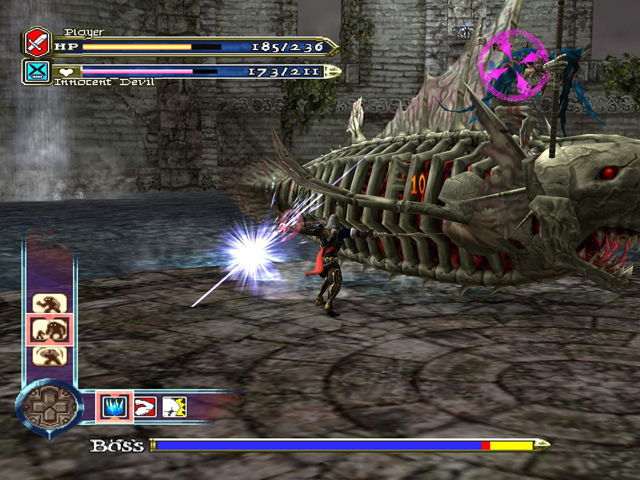