“Crimson Peak” is a story with ghosts, not a ghost story; that’s what Edith, the heroine, said when asked about the book she was writing, in a smart self-reference of the movie. The ghosts serve as a metaphor for the past. It is true that one of the subjects here is how the past can become a trap, where we sink more and more until we can longer get out of it, the same way the house on top of the crimson peak was submerged little by little in the red mineral that spread under the earth surface. 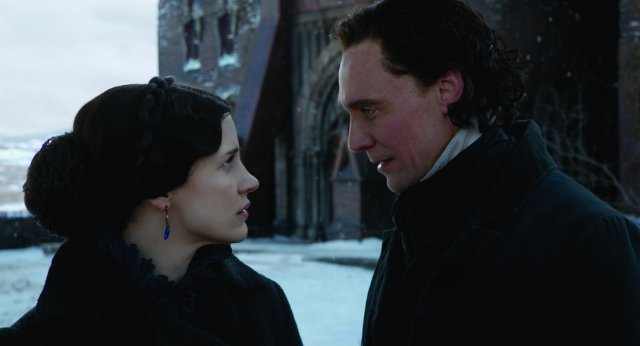 The movie’s main problem is it doesn’t have one main idea. It combines ghosts with a murder mystery, a good love and a “sick love” but doesn’t develop them properly or combine them harmoniously. The murder mystery is solved immediately, since the viewer knows the evil doers’ identities from the start. The only way to raise tension is to make the viewers worry about Edith’s survival, however, the movie is predictable and I never felt she was really close to death.

The ghosts exist mainly to offer a stylish presentation and special atmosphere; the plot could be almost the same without them. They are part of the haunted house and they are not scary despite their imaginative design. Moreover, they make things too obvious both for Edith and us: when I saw a ghost lying in a bath tub with a cleaver plunged into her head, it became obvious what had happened there. So, instead of making the mystery deeper, the ghosts weaken it.

Concerning the romance, I was not interested in the “good love” because I could not relate to the character Edith fell in love with. I don’t mean their relationship was not realistic, just that I didn’t care whether she would stay with someone who was very far from being noble. What I did like was the “bad love”, the one between Jessica Chastain and Tom Hiddleston. It was intense, violent and selfish, and I wish it was developed more. Hiddleston plays the decadent aristocrat who tries to save his heritage by any means possible but starts feeling different after meeting Edith. Chastain impersonates the captivating, ruthless, manipulative woman whose passion consumes everyone and who will never accept defeat, especially at the hands of another woman. Her performance, along with Hiddleston’s unique presence, is enough to keep the movie rolling. In fact, when I think of “Crimson Peak” the first images in my mind are Chastain with her deep blue dress, old-fashioned hairstyle and deadly look as well as Hiddleston’s expression during their last scene together. As for Wasikowska, she is a good actress –for example, see her in “Madame Bovary”- but I don’t think she was the right choice for Edith and her one-liner in the end ruins the mood.

The direction makes “Crimson Peak” worth seeing on cinema. Though the huge house on top of the hill only has a few rooms and the heroine never discovers anything exciting, the intricate decoration, the furniture and various objects from another era, the lighting, the yellow and blue colors, and, of course, the red mineral spreading on every surface like a disease, form an atmosphere that captured my interest. The movie relies on style a lot and even the scene transitions are not common; for instance, notice the “circle” closing around a character before we fade to black and get transferred to the next scene.

“Crimson Peak” is one of those few movies where the direction and performances compensate for the flawed script. If it had a more focused story and someone else for the main role it could be an inspiring thriller. Nevertheless, I left the cinema satisfied; I guess I’ll have to thank Jessica Chastain for that.