comments Share
You are reading
No Escape – Movie Review

“No Escape” is one of those low-profile movies that often don’t get the attention they deserve. The story is about an American family who moves to a country in south-east Asia for work but finds itself in the middle of a bloody rebellion and tries to escape. The plot could be divided in just a few sequences, however, each one of them made me eager to see what follows. The sequence on the hotel rooftop, where Jack, his wife Annie and their two children are trapped, is original, bold, realistic and well-directed. Notice how the way the second child passes to the other side is different from the first, making the scene more interesting. When the family hides in the destroyed building, pay attention to the dialogue between the little girl and her parents, which is both believable and touching. The scene where they pass through the angry mob with a motorcycle is another example of how to raise tension and develop different characters (I am referring to the man who didn’t give them away) simply and effectively.

The direction creates an atmosphere of chaos, with corpses lying around, the rebels moving like a pack of wolves and the city becoming even more menacing when night falls. A friend of mine mentioned he didn’t like the use of slow motion but I was not annoyed by it, besides it is limited to the first half. 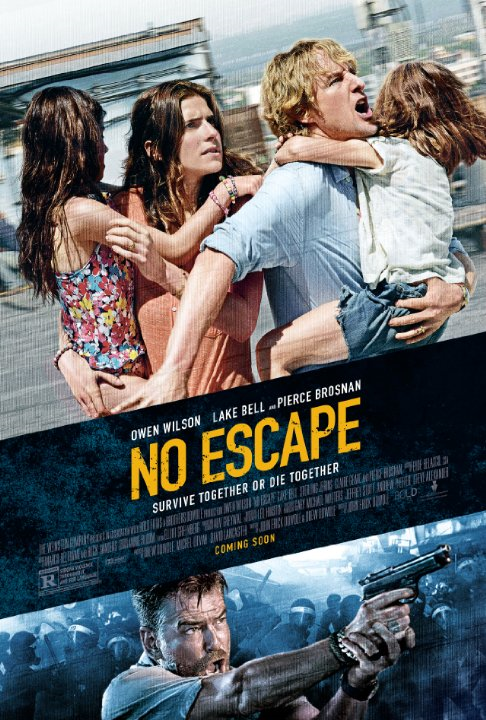 Owen Wilson plays Jack, who becomes a hero to save his family. I appreciate the fact he surpasses his limits but remains human all the time. His connection to the rebellion is interesting too and makes the script more coherent. I didn’t know Lake Bell, nevertheless, she impressed me with her performance as a mother who struggles along with her husband to keep their children alive. Sterling Jerins and Claire Geare impersonate Jack and Annie’s daughters; I have to say American child actresses never seize to amaze me. It is difficult to imagine how a father, a mother and their two little kids will behave under such extreme circumstances but everyone involved did a great job to make scenes realistic and exciting. As for Pierce Brosnan, he plays an agent, a role he knows well. His character has more depth than you would expect: he feels sorry for his past and gives the audience an opportunity to reflect on the political and social situation of a poor country, plagued by blind violence.

“No Escape” surprised me pleasantly and is among the best movies I have seen in 2015. It has tension, solid performances, realistic presentation and loveable characters. The ending made an impression on me too.