comments Share
You are reading
The Legend of Legacy – 3DS Review

The Legend of Legacy is a game that has a lot of names to live up to from former Square and Level 5 employees. Follow the exploration of seven adventurers as they all come to an island untouched by civilization for ages all for different reasons. Why are they there? What do they expect to find? Take control of the adventurer of your choice and recruit the rest in order to delve further into the island and the savage lands it possess in order to find answers in this old school RPG brought over to us from Atlus. 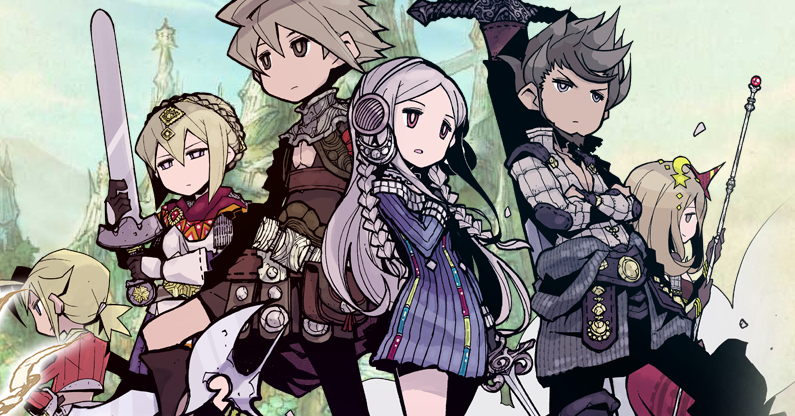 As I mentioned within the preview, I want to emphasize that this game is truly not for everyone. Legend of Legacy is a hardcore RPG that acts in a fashion as a spiritual sequel to the likes of the Saga series. There are no levels, no skill meters, and zero indication as to when your Hit Points, Strength, or Specific Attack Moves are upgraded. Things simply happen when they do. Learning something new in one fight, getting a Game Over, and then redoing the same fight will not yield the same rewards, skills, or stat upgrades. Everything is generally reliant on chance and getting a Game Over screen fits that bill and is very much a real possibility even in the most simplest of fights at times.

Literally starting off exactly from where it had been left off in the demo, jumping right back into Legend of Legacy was as easy as it was made out to be. Either using a physical cartridge or downloading it through the eShop, once either method of play was selected and ready to use it was as simple as re-opening the demo and selecting transfer function. Once this was selected, the process took no more than a few seconds to complete allowing to easily continue the adventure in the full version from where it was left off. 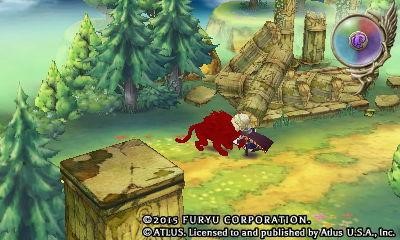 In a lot of ways the Demo was an accurate representation of the final game. Generally even if a few hours are provided, one can expect new features to prop up from time to time. Instead of this, Legend of Legacy continues as it starts with no hidden agendas and the Island being explored opening up to its adventurers one location at a time. Using this idea of exploration, starting at the newest point (post demo) is a larger map which is designed as multi part affair as it actually intertwines with a second maps that is only accessible from it. Moving through the already expansive desert of the roaring valley, caves can be dived into which are the only real way of making it to other portions of the desert only available through this subterranean network. While this could be said to be providing something new, it does stick within its predefined parameters which are still more than enjoyable to explore.

Exploration itself is about one of the best worked details of Legend of Legacy. Using the exploration map that automatically fills on the bottom screen is going to be extremely important as things are only visible on the top screen within the party’s line of sight. Working in a manner of pop up picture book, every environmental detail from the paths to the obstacles and enemies are all reliant on the line of sight making callously running around a bad idea. While there’s a general idea of what’s over that picture perfect hill crest, the enemy may have moved around from the last time your party passed by causing you to run straight into them leading a whole load of trouble. This is what makes the bottom screen’s map so important as it at least allows for the player to plan out their movement so that once there, they can concentrate on moving straight through if combat was not on their mind while exploring. 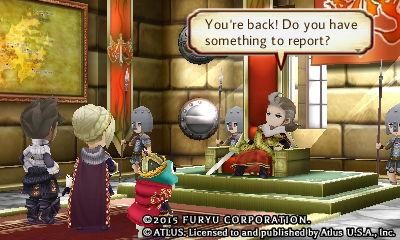 For some people a simple exploration in order to find the exits or pathways to the next map or area will me more than enough. For completionists however, moving through the entire map segments one at a time up to a completion of one-hundred percent is not only recommended but rewarded. Once an entire map with all of its areas have been marked out and completed they can be sold for a premium to the Item Vendor in town who is not only the only Merchant, but who sells his own stock at a premium requiring that extra cash flow if the party is to equip itself until something better can be found out in the field.

The town that our party gets to visit in order to sleep and properly save its progress never really gets bigger or at least better. Staying pretty much the same, there’s no real reason to come back other than to visit the Portmaster as the Item Vendor receives new stock pretty much every once in a blue moon. This honestly made cannibalizing non used party members early game not only worthwhile but also necessary. What makes the port interesting is that it’s not an instant gratification sort of feature. Players must pay in order to set out a ship in hopes of acquiring new gear and items through trade of anyone that it may pass by. Coming in three price tiers of almost exponential differences, some thought must be put into this as cash isn’t quite the easiest to come by as selling materials are random in their placements and appearances. Made even more interesting is the feature of the Spot Pass that will increase the chances of better items once the ship comes in making it quite worthwhile to allow your trade vessels to spend elongated times out of port.

If there is one lesson that Legend of Legacy can teach it is to not get complacent. Doing this will be the quickest and easiest way to an utter defeat and frustration for forgetting the bottom line. It’s not easy. Using a party of three members, the combat system itself is easy enough. Attack, Defend, or Support your allies with healing maneuvers. Putting these three tenets into practice however is a whole other experience that penalizes a character’s maximum hit points every time they fall in battle. The only upside of this is that a simple heal spell or ability will bring them back into the fight instead of specific restorative items. 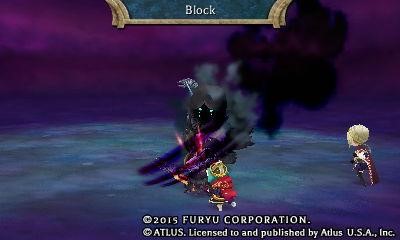 With stat upgrades and skill acquisition being as random as it is, getting comfortable with the battle system and your party members is a must. While it’s a good idea to try each member early on to see which weapon styles and skills are useful to your play style and strategies, sticking to a set party should be the near objective. Each of the seven possible characters can use any weapon type that they choose however just because they can, doesn’t mean that they should. Each member has an affinity that makes them better than one of their compatriots and if their weapon styles are close enough to the same and they both align closer to one of the three attributes of Attack, Defense, or Support, then maybe another member should be chosen for versatility as it’s going to be needed.

With how hard combat can be at times, a lot of time will be spent with one member attacking, one defending, and one supporting the party with defensive buffs and various healing methods. Forgetting this as mentioned will only bring ruin to exploration. This can in some ways cause a bit of a slowdown in the gameplay as everything essentially comes to a crawl and everything is a battle of attrition until stats increase or newer gear is found in order to help. This at times felt like it was a bit much even for a lover of the style and someone who doesn’t mind grinding in order to move on to harder challenges. As much as I would love to say that there’s a balance that is stricken at some point in time, there really isn’t. Floating between obscenely hard and way too easy, way too easy depending on the elemental balance of the field can leave to its own level of misery and failure if the player isn’t careful with the party’s battle orders. 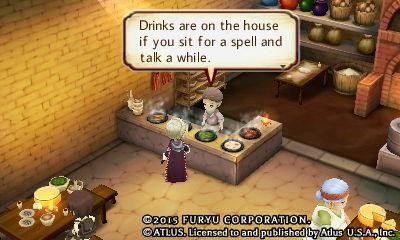 Elemental Balance is a weird and fickle system that can change in a heartbeat from your party’s best friend to its worst nightmare. There are four elements that control both the favor of the field being explored and then the battles that can take place within. Air, Water, Fire, and Shadow are the four that control the balance or lack thereof that can instantly change the course of battle in a heartbeat as both the player’s party and their enemies can affect it. Starting off with no means of manipulation it isn’t until the first Contract with the Element of Water can be established that things can start to be turned in your party’s favor without worrying about getting instantly wiped out. From there, and subsequent Contracts obtained, learning exactly how to control the elements will take some time but once done, battles of attrition become at least a bit easier by skewing the scales in your favor.

The only true saving grace which can help mitigate some of the frustration that could happen is the ability to Quick Save at any point in time. Being able to quick save and simply continue from that point works like a normal save and does not put the game on a hiatus or hibernation. While full saves can be done in one of two files from the Inn back in town, having the quick save available can allow for a player to test the waters without having to run back everything five, ten, or fifteen minutes to make sure that no progress is lost when the inevitable Game Over occurs.

Legend of Legacy is both a wonderfully beautiful to look at experience as much as it’s wonderfully brutal in most of its features. While definitely catering to hardcore JRPG fans, even lovers of a harder RPG experience should find a good time while exploring this mysterious and forgotten island.