comments Share
You are reading
Boss Monster 2: The Next Level – Tabletop and Board Games Review

TagsBoss Monster 2: The Next Level, Brotherwise Games, Tabletop and Board Games Review 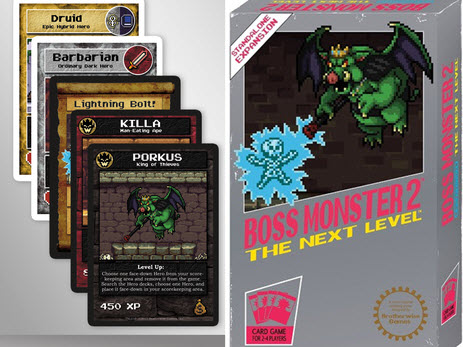 Chris and I had a good deal of fun with the original Boss Monster game, as well as the expansion I reviewed a couple of days ago. However, Boss Monster 2 really does take things up a notch or two. Brotherwise Games did not try to reinvent the wheel here, but they went back and iterated on the original game, adding the one thing it needed most – more variety.

The premise to this series has always appealed to me. There have been a handful of video games over the years that put you in the role of the bad guy, who is trying to lure brave would-be heroes into your dungeon so you can kill them and harvest their souls for your own evil ends. So take this entire concept, slap it on some cardboard with some awesome pixel art and what do you get? The Boss Monster games.

Gameplay is broken up into f phases. You kick the game off by getting your particular boss monster, creating the first room and then acquiring a handful of randomly selected cards. From here, the first phase is where you have heroes start off in town while each player picks a new card. Heroes are drawn from a regular deck to begin. When that deck is depleted, look out for the epic heroes. Bigger rewards, but also much bigger challenges – just like the original Boss Monster game.

Next up, you have your building phase. In this stage, players take turns adding rooms to their dungeons. They can add to existing rooms, or build over the top of existing ones. Advanced rooms require this mechanic of building onto, based on the original and advanced room card sharing a type. These dungeons serve as the primary playing field, as I’ll explain in a bit.

The third stage is the bait phase. Basically, you have to first compare your treasure values with your opponents. These then serve to lure heroes who are attracted to specific types of treasures. If all of the players tie, then no heroes wander off, and they build up with the next drawn heroes. This can create large runs of characters all at one time. 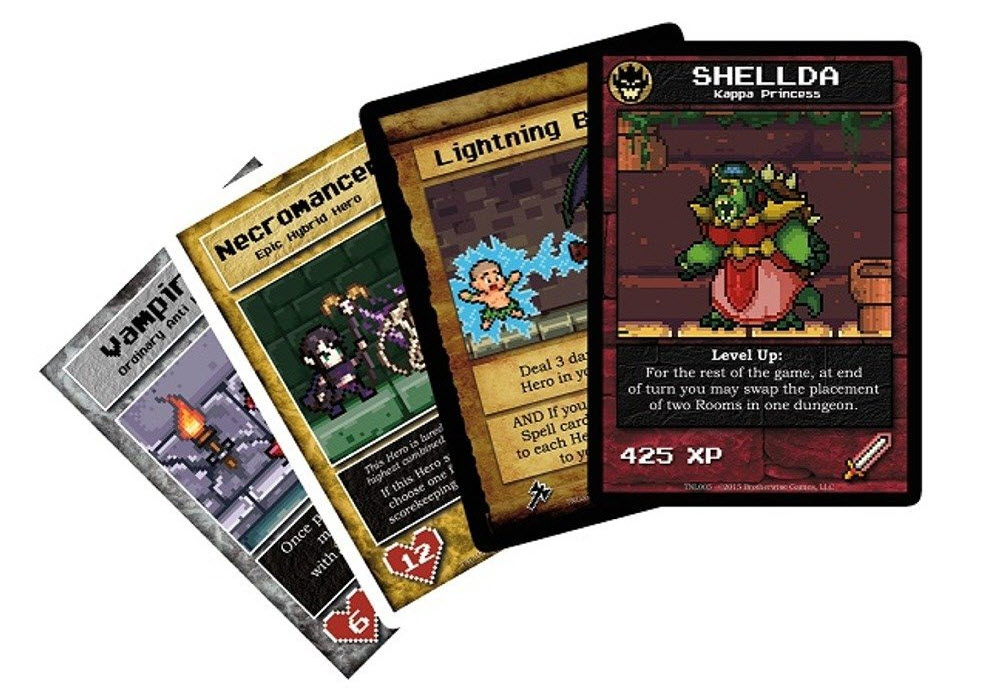 The adventure phase is where the meat of the game takes place. Here the intrepid heroes make their way through the player’s dungeon. They work room by room, allowing each of the room’s abilities to impact and deal damage to them. Additionally the Boss Monsters have spells and abilities that they can unleash on the players, but because these are finite, you want to save them for when you really need them (like epic heroes later in the game). If the hero takes enough damage before reaching your Boss Monster, the hero is slain and flipped over as an indication of their value. If the hero manages to navigate the perils of your dungeon, they deal damage to your Boss Monster, and you have nothing to show for their visit except a new wound. Too many wounds, and you can die during the final phase, which is really just a summary of the turn. Here if a player has collected enough souls, they win – or if they have sustained enough damage to their Boss Monster, they are eliminated from the game.

The decks of cards are of solid stock, and the artwork is excellent, invoking almost immediate nostalgia. Even the box of the game has a very Metroid feel (or if you were lucky enough to get a limited edition one, the box is very reminiscent of Super Mario Bros. 2). On top of the cards, you get a rule book that helps to explain the game (it is pretty easy to learn, though it gets easier with multiple playthroughs that help you gain familiarity with the cards).

So while in structure things are essentially the same, a few of the new card types and rules really help to enhance the experience. Dark and Hybrid Heroes add new rules to the mix, inviting players to mess with one another more directly. The Hybrid Heroes are basically ones who are drawn by multiple types of treasure, not just one. They are a nice addition, but the Dark Heroes are better in my opinion, because they encourage players to ‘spend’ room cards to boost them. It is a devious way to get at your opponent more directly.

This sequel game serves as a standalone, but it can mix and mingle with the two prior titles as well. The games are still limited to four players (something I do not mind at all, but could be of concern to people who want larger tabletop games), but goodness – mixing together all of the different versions of the game really does create an outstanding variety of mechanics and cards that gives Boss Monster 2: The Next Level a ton of replay value. All in all, a very good time that is easy to recommend.