comments Share
You are reading
Boss Monster: Tools of Hero-Kind – Tabletop and Board Games Review 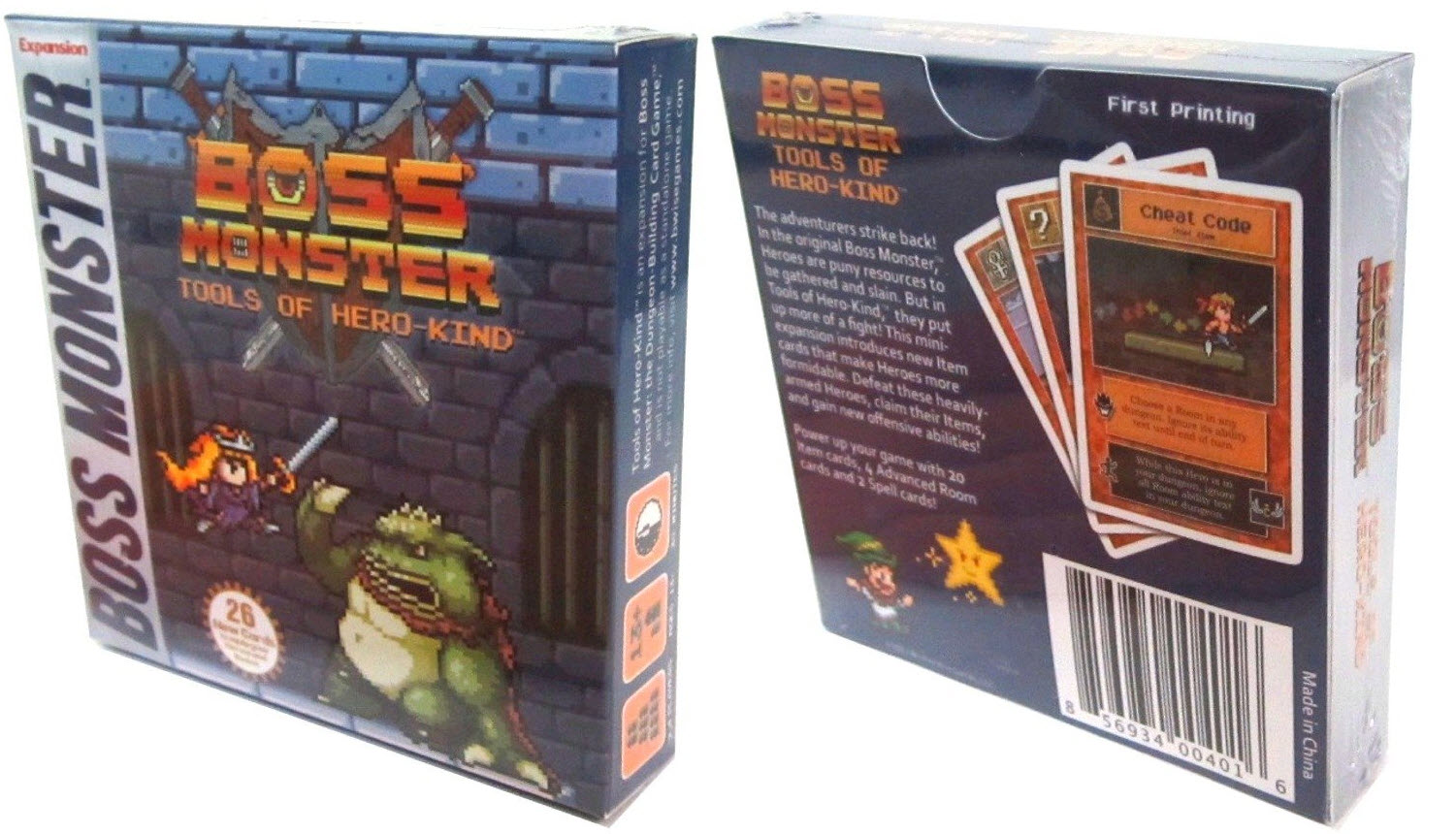 Earlier this year, we had a chance to sit down and play Boss Monster: The Dungeon Building Card Game, and we enjoyed it a great deal. Now that the video game season is slowing down a bit, we thought this would be an excellent time to visit some more tabletop games, including this expansion to the original game.

Right away, I loved the aesthetic here. The first game’s box had this excellent first run Nintendo Entertainment System feel to it, as did the pixelated artwork on the cards themselves. Here the expansion looks like an old GameBoy game box, which feels incredibly fitting.

The premise remains the same, and being an expansion, the idea here is to augment what is already in place. For those unfamiliar with the core Boss Monster game, you could read my review to it by clicking the link in the first sentence. However, for a condensed overview, the idea is that players take on the role of Boss Monsters who compete to build a dungeon that would look and feel right at home in any classic video game. The idea is to lure adventurers in, and entice them to explore your dungeon, which you build with cards that are shuffled to you at the start of the game.

The heroes will at the start of every turn figure out which dungeon to venture into. There are certain criteria that appeal to some types of heroes over than others. This allows you to compete against the other players, since you really want heroes to come into your dungeon. However, these are heroes – the stuff of bardic tales and lore and they do not go down without a fight. Should your dungeon construction not be sufficient to kill the hero, said hero will deal damage to your boss monster. It is a risk versus reward proposition as you have to collect ten souls to win the game, and those souls can only be earned by killing off those pesky aforementioned heroes. As the game progresses, the heroes become more powerful, yielding better rewards but also capable of killing your Boss Monster off as well.

I really enjoyed the flow of the first game, but even then I felt that there was plenty of room to expand by adding more cards to the mix. Tolls of Hero-Kind is exactly that. It adds item cards that are played before revealing the latest batch of intrepid heros. These items can make the heroes more powerful and therefore more likely to strike your boss monster, but at the same time killing a hero in possession of an item allows your monster to attain said item. It adds another layer of strategy to the game while giving more reply value since there is another variable now that mixes up the gameplay mechanics further than before.

While we were completely content playing with three or four players, one of the things I was curious about was whether or not the expansion would add more players to the mix for those who really wanted a large group party. This is not unheard of in expansions of this nature, but no – Tools of Hero-Kind will not allow you to add extra players into the mix.

So should you pick this expansion up? It really boils down to whether or not the core game (or if you haven’t played it, the idea of the core game) appeals to you. Chris and I had a lot of fun with the original Boss Monster, but the lack of variety did start to weigh heavily on it. The expansion does make the game harder, but that is not a bad thing. Boss Monster was already an easy game to learn and play, so a little more overhead here is not a bad thing. The items add a more unpredictable nature to the game, and it is better for it.

However, if the original concept did not appeal to you, or if you were hoping to make this a five or six player game, you might come away disappointed. For our group of players however, this was a great reason to dust off the original game (you cannot play Tools of Hero-Kind without the base Boss Monster Game), and we had a great time with it. This makes it easy enough to recommend for fans of the core game looking for a reason to play again.