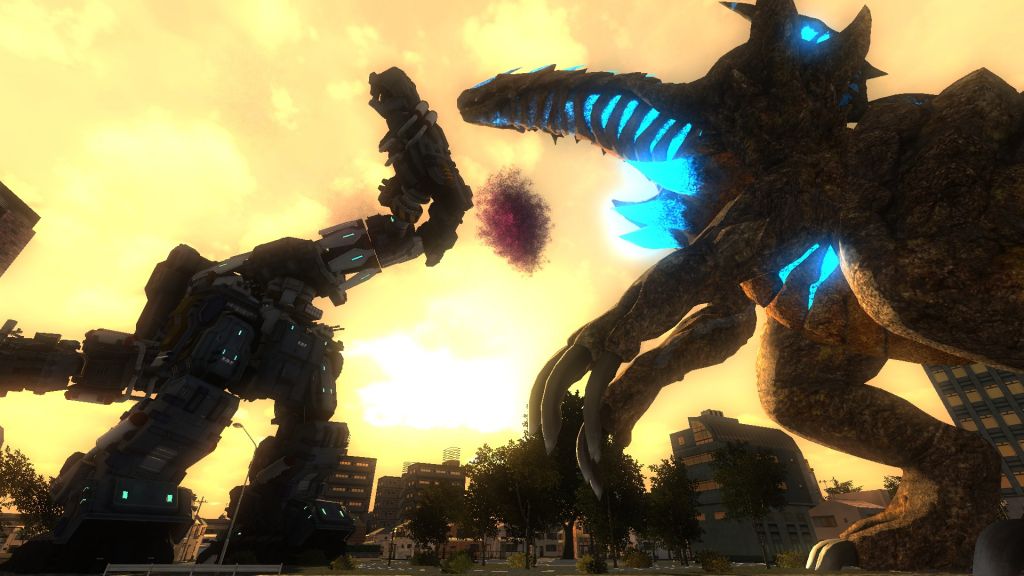 If chaotic co-op brings you joy, join the EDF and prepare to deploy!

Starship Troopers is a big freakin’ deal. In fact, last week I watched it for the 23rd and ½  time (give or take 10 or 20 viewings) with one of my childhood friends. As per each viewing, I was brought back to the spectacle that was my theatrical experience in ‘97, a moment when, rather than meticulously analyzing absolutely everything for underlying meaning, as is my nature, I enjoyed the film purely as Human VS. Arachnid entertainment — without any consideration for its obvious satirical, political, and metaphorical elements. The film strapped an M3 tactical helmet to my head and air-dropped me into its militaristic universe. Top-notch special effects and cheesy but sincere acting intertwined with lurid, graphic violence and a morale-boosting score to compose a future sci-fi classic that I, ignoring the inconvenience of greasy hands befouled by an over-buttered popcorn bag, could appreciate as a simple action movie.

Naturally, as a gamer, I occasionally mused: “How freakin’ sweet would it be if we got a REAL Starship Troopers game? You blast and flamethrow aliens. You incinerate bug holes with portable nukes while screaming ‘BUGS ‘R BAD FOR BUSINESSSS!’ And, like, you can boost morale by offering troops more chow and stuff! Freakin’ sweet, man. Real freakin’ sweet….” Miraculously, in 2007, my musings were materialized when I read about a budget title called Earth Defense Force 2017. While it received mixed to abysmal reviews from half of the gaming critics, I read several user reviews that claimed, “It’s a dream game come true for fans of Starship Troopers.” Seeing this, I punted my Biology textbook into a shower curtain, and sped around my mountain town until I found a retailer with a rare, solitary copy. 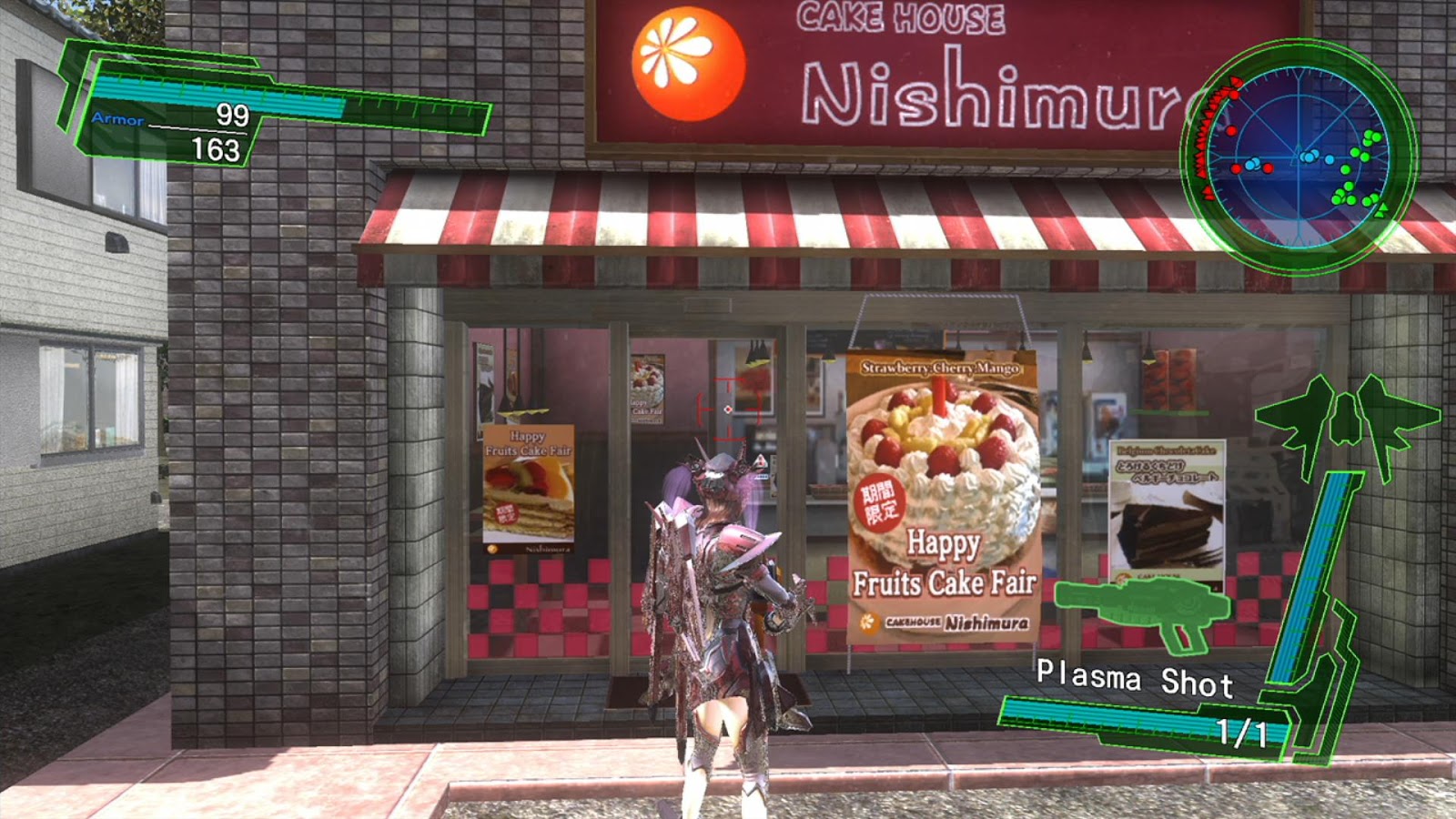 Little did I know, I was about to be forever enlisted in the EDF:

And today, on my fourth tour against the Reavers, in 2015’s Earth Defense Force 4.1 Shadow of New Despair, I’m bashing bugs with the insecticidal pimp-palm. And it’s never been more enjoyable, more cathartic; the title’s perplexingly overwhelming waves of enemies, four devastating and unique soldier classes, and improved frame rate and sense of scale are a few of the qualities that promote this installment of the EDF franchise to the rank of “Superlative.” It’s also the most amusing co-op experience I’ve had this year.

For all you new baby-faced recruits, first of all, everyone fights; no one quits. Secondly, here’s a rundown of what’s expected of you at the Earth Defense Force: Aliens dubbed The Reavers have invaded and nested in our planet’s core. It’s your responsibility, being the world’s first and only defense against malicious extraterrestrials, to exterminate staggering waves of immensely proportioned bugs, arachnids, robots, spaceships, and dragons (yes, DRAGONS who spit hot fire!), and from their hilariously ragdolled carcasses, collect hundreds of distinct weapons and armor pieces that will make you and your squad the most imperishable D-force these alien maggots have ever tried to consume. You have the options of going in solo, recruiting a single friend for two-player split-screen, or joining a squad of three others in an online warzone. Whatever the choice, you better familiarize yourself with each classes’ special skills, lest you want to wind up asphyxiating, half-eaten, in some bug’s bulbous belly. 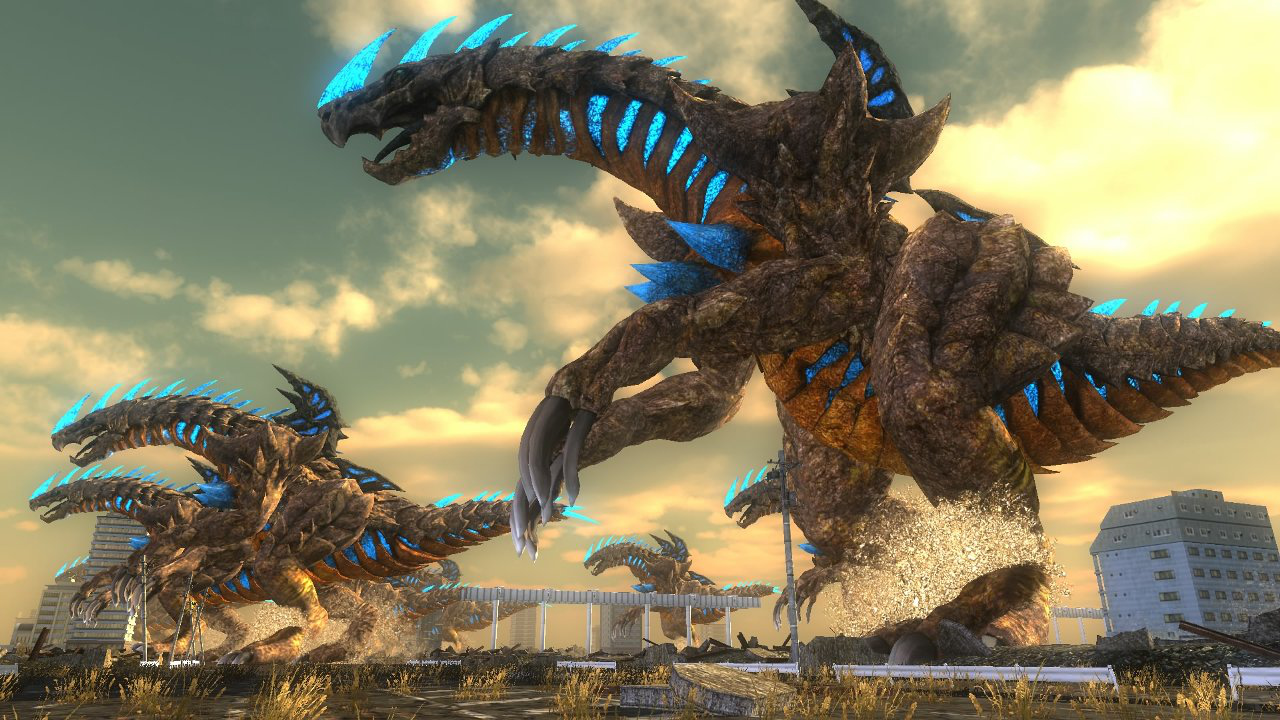 You have the choice of becoming either a Ranger, an all-around exemplary foot soldier; a Wing Diver, a female dive-bomber with the power to take to the skies; the Air Raider, a tactical support unit who can summon vehicles, mechs, and make it rain with the air strikes; and, the burliest bad boys on the Force, the Fencer, an anthropomorphic tank who can haul up to four different guns, shields, and melee weapons with him into a skirmish. As someone who has served extensively in all four units, I can say that each one, depending on your play style, is a fun, distinctive, and valuable asset; however, for the Air Raider and Fencer especially, it takes a bit of time to become familiar with their special strengths and limitations, which are truly revealed after a few hours of collecting and experimenting with their respective gadgets.

But that’s part of the charm of being in the EDF; you’re not only tag-teaming swarms of giant abominations, but with each mission, you’re consistently making your soldier a stronger, more adept extermination machine. Weapons and armor boxes are randomly dropped by the vermin you blast, so as you progress, you’re continuously discovering new weapons and tools that are tweaked just enough in terms of performance and firepower from others in their category to warrant experimentation. Plus, you’ll need to learn which weapons are appropriate for the various FUBAR situations; if a mission is populated primarily by spacecrafts, you probably don’t want to take a V-Spread Shotgun and an Air Tortoise into the field. You’ll probably want some variation of the sniper rifle or the homing missiles to keep your sweet bum from being erased by a Mothership’s Genocide Gun. 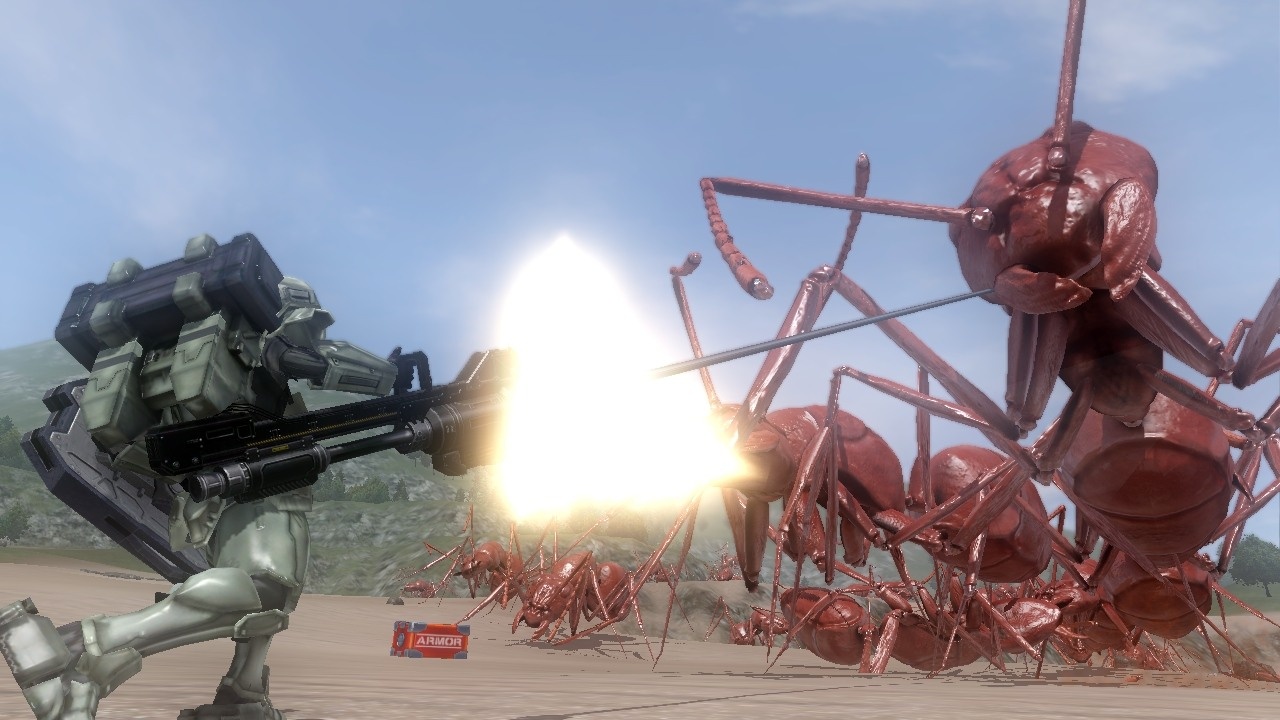 For you veterans who are thinking about re-enlisting, EDF 4.1 is a remixed, remastered, and all-around more “rad-ass” version of EDF 2025. With it, you get an improved frame rate, more polished graphics, larger and faster swarms of enemies (the latter a result of the frame rate), new weapons, more aggressive A.I. compatriots who do so much more than bark a hilarious one-liner before going KIA, additional stages that include a combination of on-foot and Pacific Rim-esque mech battles with a radioactive bruiser who could overpower Godzilla when it comes to the tremors generated by his charging belly-flops, and enemies that (and maybe this is an impression that only I and the several people I played with online had over 20+ hours) just seem more resilient than their 2025 counterparts. Now, the frame rate isn’t perfect; it still has the propensity to drop below sixty frames during the most calamitous occasions, like when your standing amidst five explosions while multiple skyscrapers buckle around you. But mostly, it remains surprisingly steady during moments of shrieking pandemonium. Honestly, for a veteran such as myself, I believe the frame rate to be reason enough to upgrade, for it improves every element of the frantic game design.

Service in the EDF isn’t for everyone. For most, our organization will be stigmatized as a visually ugly, repetitive throwback to B-grade monster movies. I can’t argue with that. We can be ugly. We can be repetitive. And we are most certainly an homage to classic and modern monster films starring large and grotesque Earth-takers. But to some elite Earth Defenders, we provide some of the purest, most enjoyably chaotic third-person co-op arcade adventures these men and women have ever known. Like how I could appreciate Starship Troopers for being, on the surface, a dumb, simple action movie, I adore the hell out of EDF 4.1 for being a cheesy, uproarious action game. It helps that the improvements in this version make it, hopefully until the next chapter, the glimmering pride of the EDF. So join today. Do your part. And help us bomb these aliens out of this world (and into bug hell!).