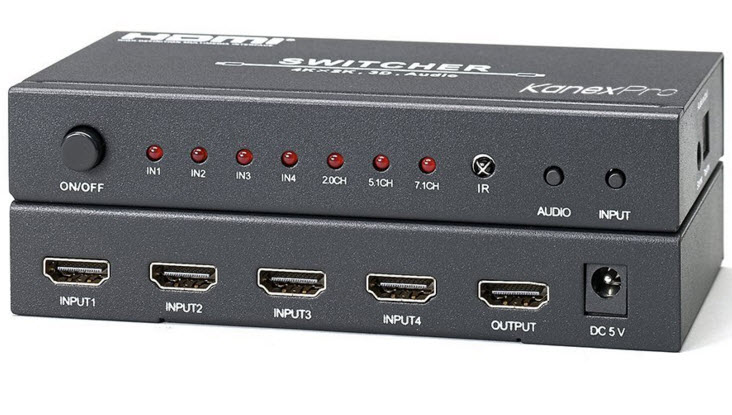 With more and more devices outputting to HDMI, televisions are strapped for inputs to match. My living room might have more consoles and devices than most, but I do not believe that having a cable box and a handful of gaming consoles is extraordinary either. The Kanex Pro SW-HD4X1AUD4K 4 x 1 HDMI Switcher helps to solve a very specific problem, and it does so just about perfectly.

Let me set the stage, if you will. An Xbox One. A PlayStation 3. A cable box. A PlayStation TV. A separate Bluray player (because I don’t want to beat up my consoles).

A 52″ Samsung television… that only has 2 HDMI inputs. So, until now, the question has always been about which signals I was willing to downgrade. The Kanex Pro gives me a new option however, as I can run up to four inputs into it, and then output to one of my two television inputs. It is worth noting that the video and audio quality remain perfect. Additionally, this little box supports 4K and 3D video outputs. This switch is well positioned to function regardless of what kind of television you have.

The setup process is just as easy as one would hope. The unit design is quite simple, with the front featuring some red indicator lights and a large ON/OFF switch. You can manually switch inputs on this device with buttons along the right side, changing your audio mix between 2, 5.1 and 7.1 channel. You can manually rotate through your inputs as well. The indicators are handy if you want to see what the setting is on, though I can see where some might view them as distracting. They are not overly bright, but in a completely dark room, they can certainly stand out if under/slightly behind your television, but no more so than any other device in your entertainment center (which is where I keep it).

On the backside of the unit, you have four inputs to the left, and an output to the right of those. Just to the right of the output is a power input (that uses the provided 5V adapter). I have used units before that lack a power source, relying on the HDMI cables to provide it – but I would have a hard time going back as I found those units to be somewhat unreliable over time, especially if they are dealing with multiple devices of differing power. 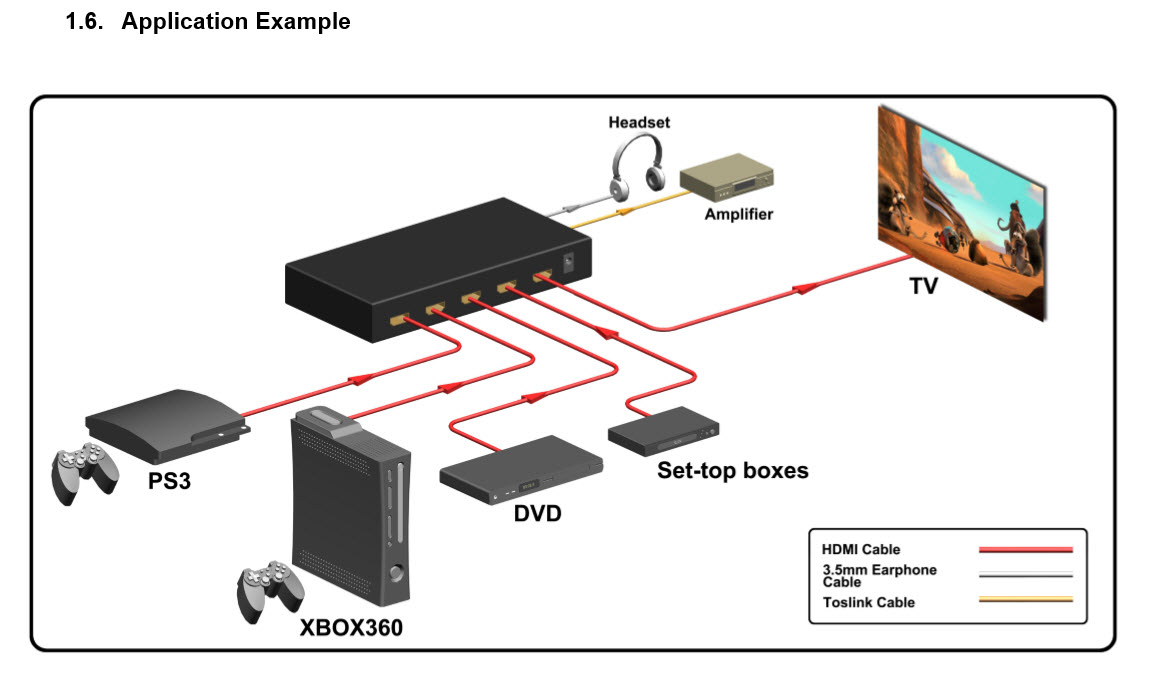 It is also worth noting that you can output audio using either the 3.5mm jack or Toslink/optical port on the left side. This combined with the individual button for audio settings show that Kanex really gave some serious consideration to how the audio outputs would be handled – good news for audiophiles.

While you can manually change the inputs, this unit also comes with a simple remote control. You can press the input button on the top left corner to cycle the sources just as you would from the front of the machine, or you can use the IN1, IN2, IN3 and IN4 buttons to jump to your desired input. Also those aforementioned audio options show up on this controller. The remote is small, so keep an eye on it.

The switching process is fast, the unit looks nice (and comes in a dark metallic gray), it stays cool and the signals are flawless. There is very little to complain about, though I suppose some units do provide automatic switching. That can be nice, but it can also be a pain if one of your devices accidentally gets powered on, or always remains on (like a cable box tends to). In this situation, not having it try to identify and switch inputs automatically is a blessing, but that caveat is still worth noting.

All in all, the Kanex Pro SW-HD4X1AUD4K 4 x 1 HDMI Switcher does an excellent job of taking in multiple inputs and exporting them to your television (and if desired – other audio sources as well). Because of its ability to handle 4K and 3D displays, it should work quite well regardless of your television and device setup and is an easy recommendation to make.