comments Share
You are reading
Arc: Twilight of the Spirits – Retro Reflections 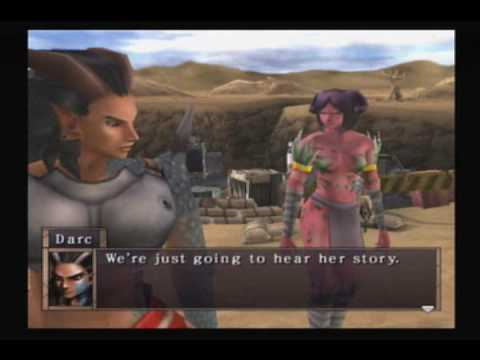 I hadn’t played Japanese role playing games for years until I decided to try Arc: Twilight of the Spirits. Though it is not a well-known title it certainly has its merits.

The story is about two brothers, a human and a deimos, trying to save their races from extinction in a fantasy land inhabited by all sorts of monsters. To accomplish this they must gather five great spirit stones, which hold infinite power. So, each one of them gradually forms a different party of followers. The humans are devoted to Kharg while the deimos are devious and cannot be trusted. The plot is rich and has many ideas which are often met in Japanese culture, such as fate, duty and creatures that are only partially human. I liked the connection of patriotism with peace and prosperity and the notion that progress decreases the spirituality of a civilization. The dialogues are very interesting at first but later they get repetitive, predictable and naïve. I expected to see Darc, the deimos brother, to be cunning and ruthless but he ended up behaving like a boy scout.

The quests are very simple: you talk to someone, he/she tells you to go to a specific place, you fight some enemies there and the plot moves forward through a cut-scene. The game is linear so your next destination is always evident. Fixed battles are unavoidable but there are also many random ones, which are good for leveling up your team and collecting gold. I encountered two side-quests, one of which required finding five stone tablets to release a spirit from eternal torment, but I failed to complete them.

Whether you play the human or the deimos you can have up to five members in your team, each with his/her own weapon and magic. As the game progresses characters gain access to the same spells, increasing your potential. Since this is a Japanese game a character’s appearance doesn’t change no matter what equipment he/she carries. Each one of them talks and behaves differently and their interaction is enjoyable. The only ones who didn’t win me over were Delma, a volatile devil woman, and Maru, a kid with a bow, who prevents “Arc” from having a moody atmosphere. On the other hand, Bebedora, an immortal girl who can turn others into puppets, is among the most surprising characters I have ever seen. The funny, clumsy way she walks and her remarks when she fights (“are you the enemy?”, “so, this is pain?”) are unforgettable. Combat surprised me pleasantly. A character can move freely in the battlefield during his/her round and choose targets. His/her movement and attack range vary and it is possible to strike two or even three opponents with a normal attack. Spells are usually more effective, for example they cannot be dodged or countered or guarded against, and they often cover a large area, but they consume spirit stones. Those are dropped by killed enemies or sold in shops. A character can move once during his/her turn, pick up an item and attack to complete the round. If he/she attacks a monster from behind more damage is dealt. In addition, being injured may cause a fighter to become furious, meaning that his/her

next attack will be much stronger. Items left behind are lost after the combat is over. Then, you see how many experience and special points each person gained.

Enemies are not smart, for example they do not focus on one character, but they cast spells and may cause status ailments, such as confusion. Their appearance varies from cool, e.g. the Dilzweld army soldiers, to common, for example wolves, to stupid, such as snails and walking plants. Their animation is very good but I wish you could accelerate battles by making them move instantly.

Of course, winning battles lets you upgrade your characters. Their statistics, such as defense (which makes them more resistant to normal damage) or speed (which gives them combat priority), rise when they level up and you can buy better weapons and accessories by merchants. Characters also acquire new skills by spending special points.

Besides your standard weapons, which never change and become more powerful by adding “coatings” to them, and the aforementioned accessories, other helpful things are healing items, bombs and lenses to be attached to the cannon of your airship, which can shoot your enemies while you fight.

The level design is simple and there are no dungeons. Yes, you read this correctly. Arc: Twilight of the Spirits leaves no room for exploration. Settlements are small and areas with predetermined fights don’t contain any rooms, corridors or other locations to search in. There is no puzzle solving either, except for a hidden room in a library, which you must discover.

The sound effects are spot-on, especially those of spells, and I enjoyed the characters’ voices during combat, which depend on the situation (e.g. someone may not like being healed by an ally!). The music is nicely selected and several of the themes, e.g. the one you hear when you enter the occupied town of Sulfas, are memorable.

The control is fine. I learned immediately how to move in combat thanks to the use of blue, red and yellow areas that show where you can walk to and which enemies you can attack with a normal weapon or skill. Menus are easy to read, whether you acquire a new skill, check your inventory or buy stuff from a shop. 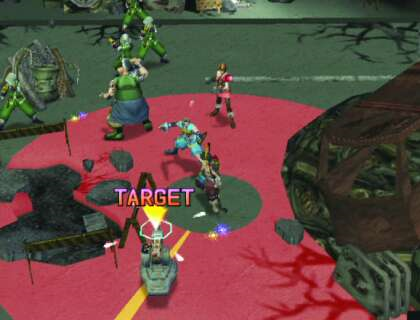 Locations include a forest with huge tree trunks, a dilapidated train station, a desert, a stone city perched on a mountain and a grey metropolis with slums and soldiers patrolling around. The graphics lack detail and the models don’t look great but the colors are beautiful and their palette changes frequently, following each area’s theme.

The game has two serious problems; the low difficulty and the unnecessary length. If you do plenty of grinding and always carry the best equipment available, it is easy to win all battles, even those against bosses (except for the last one). This is also due to the powerful skills your characters learn, which allow them to strike many enemies at once: Paulette, Kharg’s childhood friend, burns them with her sling, Ganz, a former soldier, fires explosive axes, Darc unleashes a huge tornado and Delma creates an explosion that engulfs groups of monsters in flames. Moreover, every town has people who can heal you completely and random battles replenish your stock of spirit stones.

The other problem is that just when I had completed about fifty hours of play time, had started losing interest in the story and thought I was about to face the final boss, I found out I was still a few hours away from the end. I entered a large dungeon (the only one the game has), guided one team, then guided the other, had them meet in front of a huge door, was fooled that the final confrontation was up ahead, was taken to another dimension, fought a boss (a woman trapped in a monstrosity, reminding of Rygar), was fooled again that the adventure was over and faced another boss, who was by far the most difficult in the game. All this mixed with needless battles and many cut-scenes. So, instead of feeling accomplishment I was annoyed and tired.

Arc: Twilight of the Spirits was very entertaining during the first hours, when I was discovering its special traits and was absorbed by its complex, full of political and social meanings story. Having two storylines with two separate teams was great, the graphics and music were pleasant and the combat had a tactical element I could appreciate. However, the regular grinding slowly made me tired. The story stopped being original and after some time I just wanted to see the end. This is a good game, nevertheless, I should have played it in smaller doses.