Bloodborne was the crazy inventive alternative that From Software created with Sony in order to do something a bit differently than Dark Souls. Going into a more Victorian Steampunk style than the Gothic Medieval approach that it’s brethren had taken, there was more than enough insanity to go around especially while dealing with creatures that were essentially Elder Gods. So how does something like Bloodborne become more than the incredible experience that it already was? It creates a new nightmare in the form of The Old Hunters in which will test players even harder than they already were.

Simply put, The Old Hunters is absolutely insane. Like the Crowns of Dark Souls, this new addition to the core is an actual expansion which spans many hours of brand new content with various new areas, weapons, enemies, and puzzles to solve in order to move forward. In order to experience this new content, From Software made it easily enough as a player was only required to pick up an item in the hub and defeat the first major Boss fight to move into the second stage of the night’s hunt. Once these are done, there is a very specific place that the player needs to stand in and then they are instantly brought over to the new content. No massive hoops. No massive quest lines. It is right there to dive into. Now whether or not a player is ready for this new said content? That is a question only they can answer.

This new content is not easy. This isn’t just because of the new traps, enemies, and locations, but also due to the fact that a decent character level is required in order to simply survive the first hit. This begs the question as to why is the content available so early on if it can’t even be tackled? The answer to that one at least is easy as most players would already be within multiple New Game + modes and to make it accessible near the end game would be a tad harsh even for the best of players. For players like myself creating a new character in order to see how everything ties in, the additions are clear to see and the addition is for all intensive purposes. Solid. 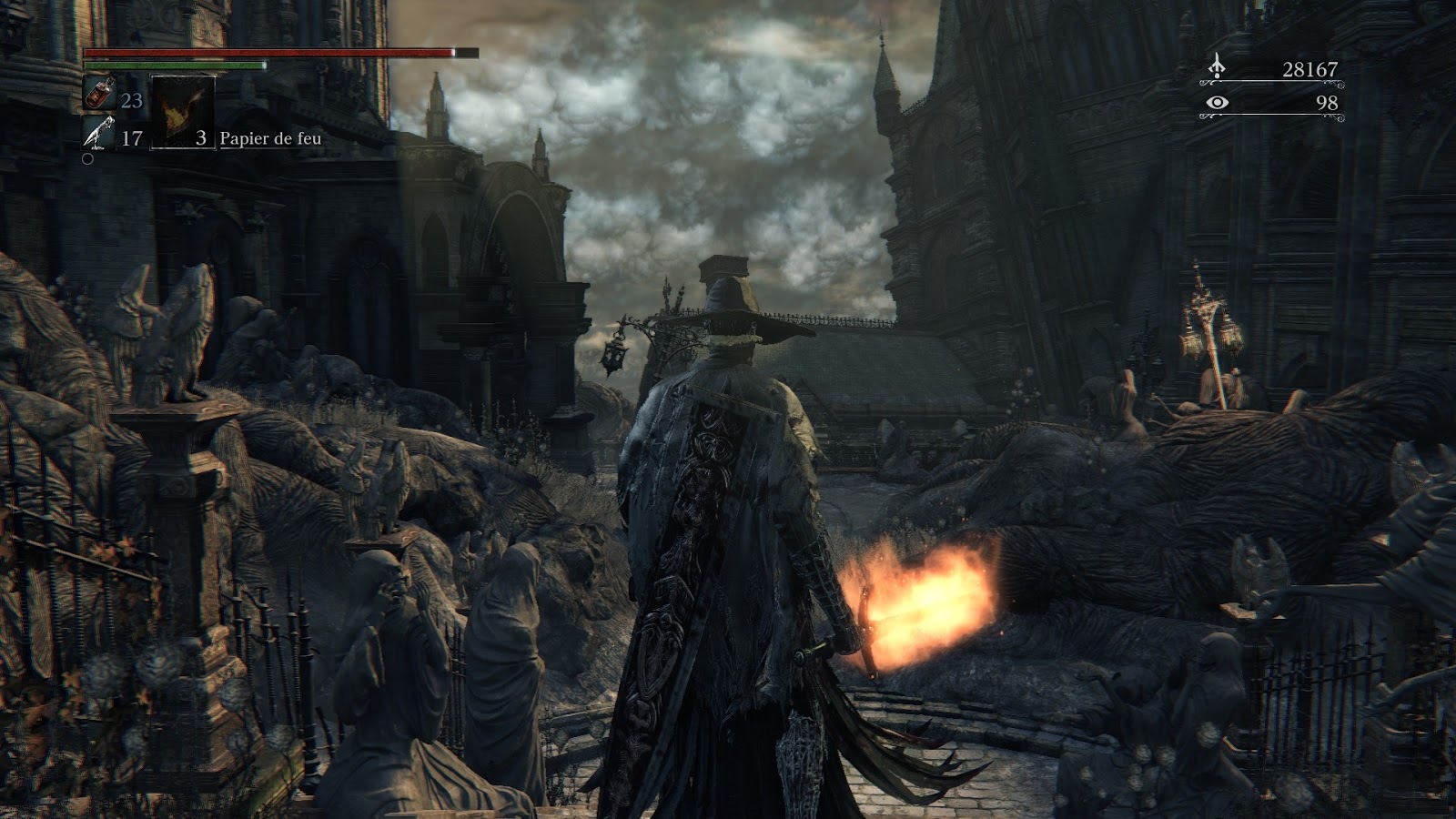 One of the biggest additions to the base of Bloodborne is the ability to summon a lot more NPCs into battle along with you instead of having to search out for other players. While a lot of other players may be a better choice at times with more or less thought put into their actions with gutsy moves that make you wonder what could possibly have possessed them to do so even if it worked, some of the NPCs are more than worth the insight in order to summon them to the field. There are some of these newer NPCs that will be brand new to the expansion weapons and all. What is interesting is that along with these newer players to the field are others that have been seen before either by side quest encounters or simply because they were trying to kill you. Sometimes both. In either case having them on your side for a period of time was a breath of relief as by this point their battle capabilities have already been shown and proven on the field with most likely one of your many, many, deaths.

The biggest addition into the new content is the entire new area that has been added complete with its own bosses and new enemy types alongside older ones for some rather interesting situations. Unlike the Crowns, the Old Hunters uses some of the previously seen environments to start off but in a wholly different manner as this truly is the stuff of nightmares and the landscapes heavily reflect this in their construction. The familiarity does not last long as it’s quite clear this is not the same place but never does it feel too different from everything else allowing it to blend in and feel like a natural extension instead of simply something dropped in and segregated.

Alongside the new areas and characters both trying to kill you and otherwise are new weapons that can be found. One of the larger draws to the weapon’s style was that most weapons were considered “trick” weapons and were essentially all two-in-ones with uses for many different situations such as a broadsword that could transfer itself into a greatsword by inserting it into its sheath. Ludwig’s Holy Sword, the name of the previous stated weapon, was honestly one of my favorites from the original set and even it could have a hard time comparing to some of the newer weapons now available such as a The Boom Hammer with the enhancement of fire, Simon’s Bow which allows for actual ranged combat, and the Moonlight Greatsword which is another of Ludwig’s weapons and incredible to behold. Each of these new weapons all have their own learning curves in order to use them properly but the same thought and care went into how they could be used. Between these, the new the NPCs and the locations, it is clear to see that this was not just slapped together overnight. 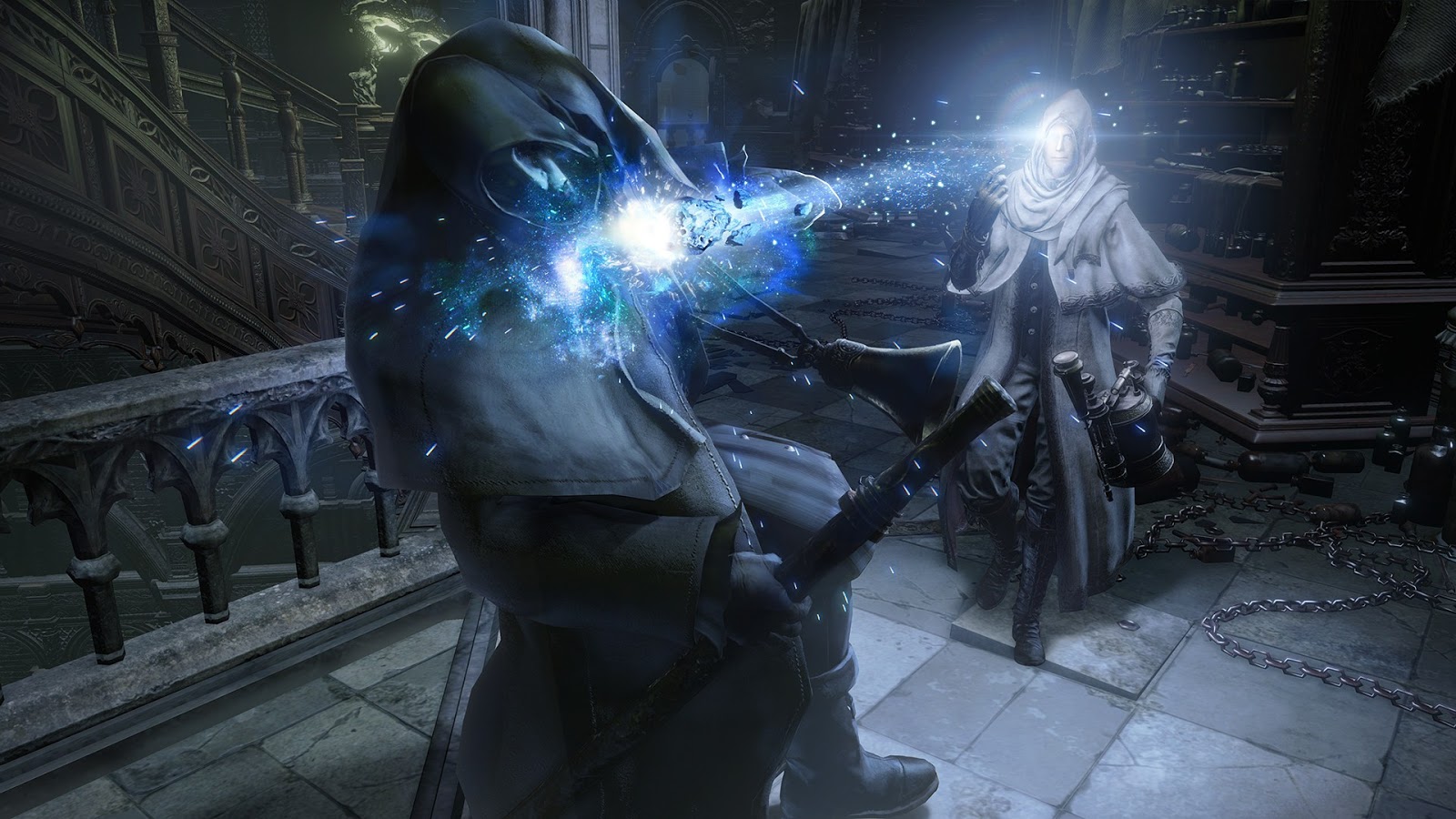 Lore within From Software’s entries has always been seemingly next to nothing upon the first glance. It isn’t until walking around and truly exploring certain locations that players will finally start to see things in different lights. Encountering NPCs and exchanging dialog is one way to see more into this insane world in which the The Old Hunters takes to the next level with some new characters to talk to and others to walk right on by as the beg you to end their now miserable lives as they’ve clearly been experimented on but have yet to go mad. Starting off things seemed to honestly be nothing more than the name suggested, a nightmare, but upon entering the Hunter’s Nightmare the player will start to see more into the world of Yharnam and the nightmares of the real world will make a bit more sense as they descend further into the depths of this one. Like the core, this new adventure will take time in order to truly understand what is going on but the trip is worth it even if it’s just for the nightmarish scenery and the challenges that it holds.

The Old Hunters is an interesting ride with crazy new everythings from the revamped starting location from its place in the “real world” over to the laboratories and the underground mazes in sloshing water. Adding in boss fights that once again will test both patience and skill with weapons and allies both old and new and there is more than enough to keep a player new to this area occupied for hours as they trudge through their umpteenth death.