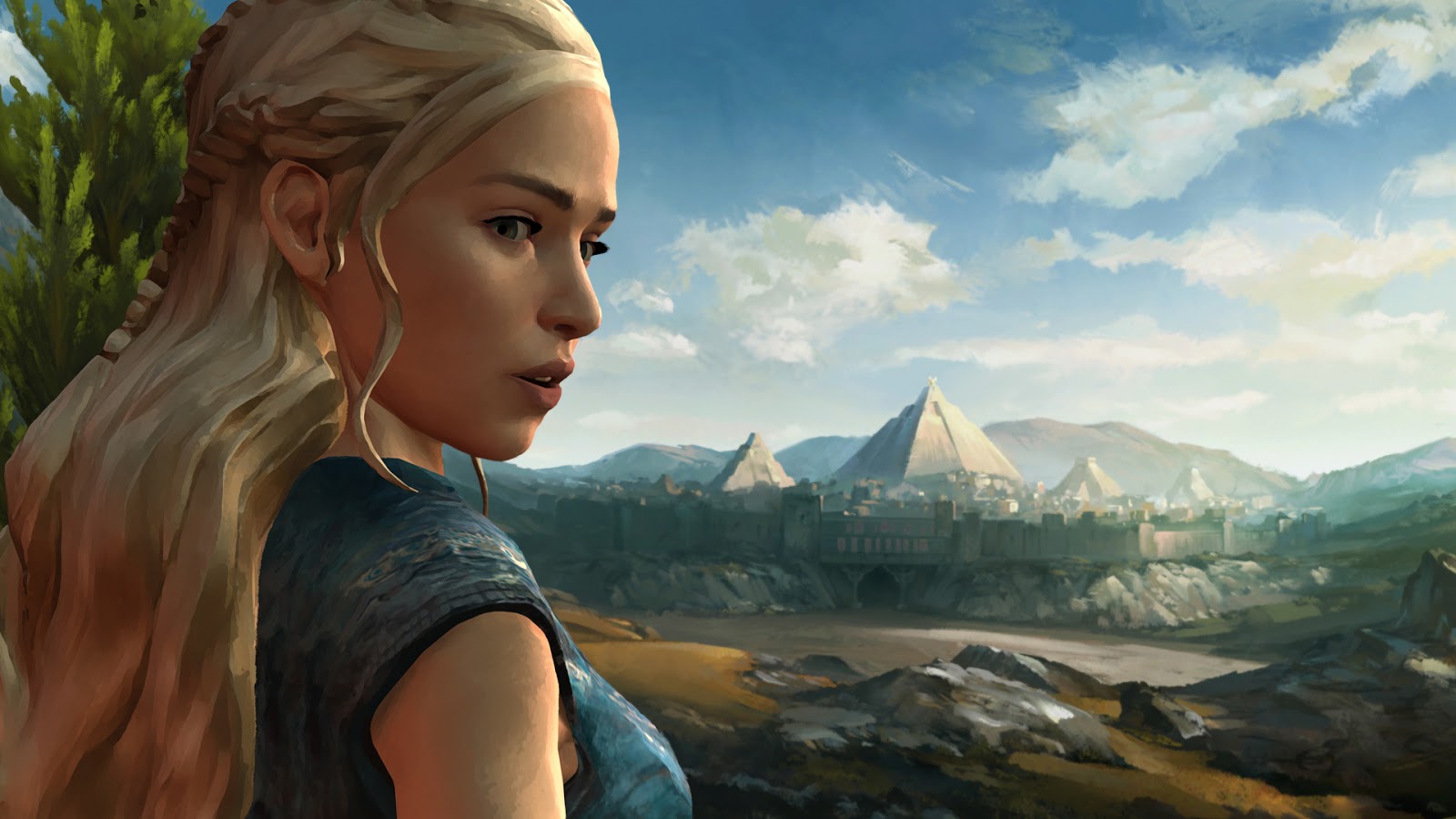 Game of Thrones and Telltale Games seem like a match made in heaven.  The world of George R.R. Martin’s A Song of Ice and Fire has plenty of sword fighting and fantasy elements, but the real star has always been the fantastic characters and interplay between them.  Telltale Games specializes in dialogue-driven adventure games with a large cast of characters.  I loved what they did with The Walking Dead license; could they pull off the same magic again? It is a tall order, but one that the team was generally up to.

They certainly give it a herculean effort, but in the end, I think there are a few too many missed beats that make it inferior to Telltale Games previous efforts.  It is still a good game, and worth playing through if you are a fan of Game of Thrones or this type of interactive storytelling.

That’s what this “game” really is at its heart; it is what its producers do.  The main focus is on telling a story and letting you make choices along the way that nudge the story one way or another.  The major story beats will always happen pretty much the same way, but some of your choices will ripple down the line. 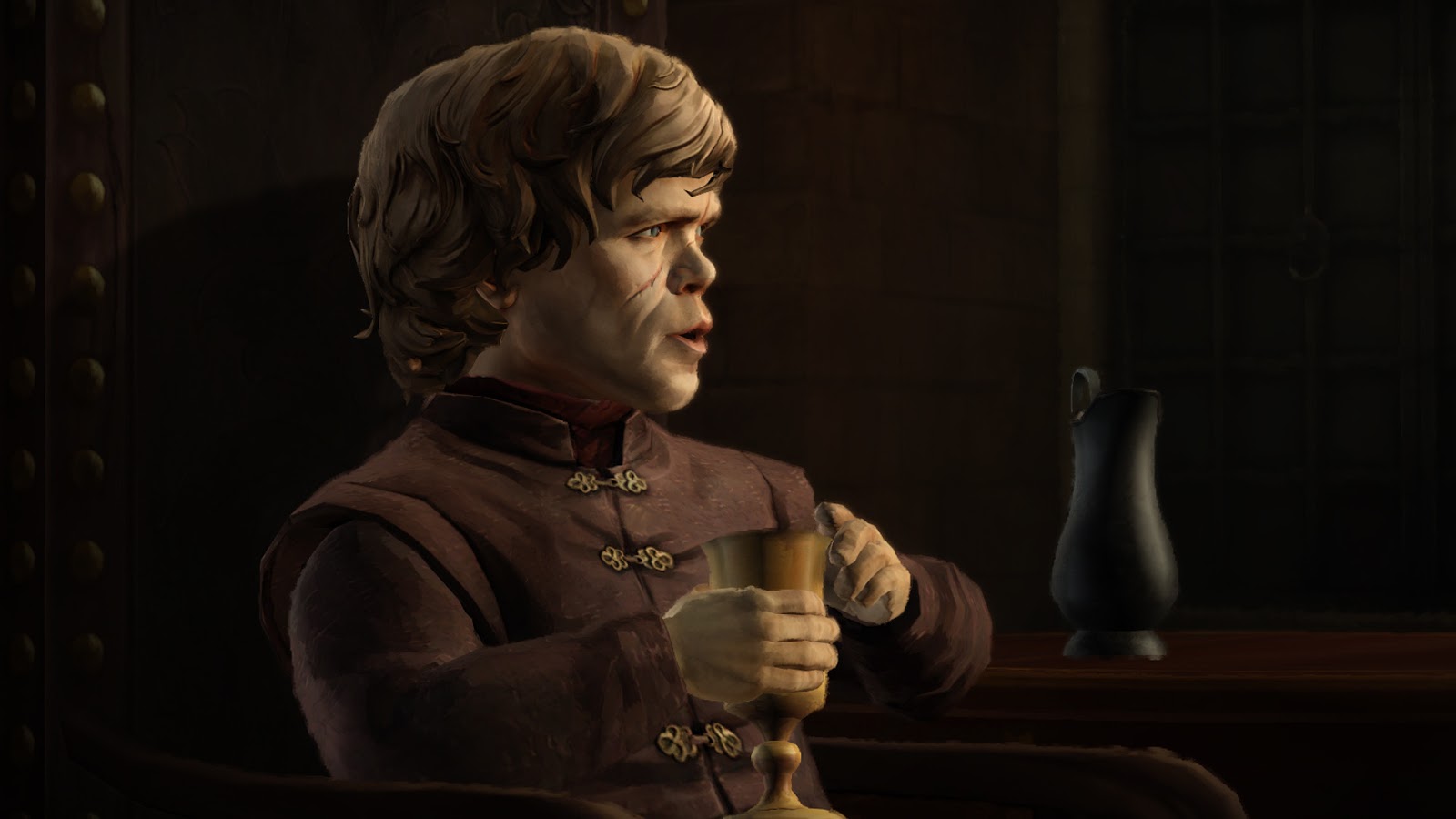 These games really live and die based on a couple of key things.  How well do you empathize with the characters?  How much influence do you have with the story?  Is the story itself compelling? How well can you immerse yourself in the world and the narrative?

Let’s start with the characters.  The Forrester family live in the north of Westeros as bannermen to the Stark family.  Much like their liege lords, the events of the Red Wedding cause a massive shift in the status quo and send everyone careening on a path that puts the future of the family itself in question.  The family itself is generally likable; all of the characters have very distinct personalities, but generally come across as “the good guys”.  Their rivals, the Whitehills, are a little over the top in their obvious villainy.  There is little “grey area” where they are concerned.  Any more evil and they would be twirling their mustaches.  In general, though, they are easy to dislike and really make you want to root that much harder for our down-on-their-luck heroes.

The fates of the Forrester siblings also bring us in contact with a handful of the core ASOIAF characters.  Margaery Tyrell, Tyrion Lannister, and his sister Cersei have fairly significant roles to play in the King’s Landing portion of the tale.  Jon Snow and Daenerys Targaryen have smaller roles to play in their respective arenas.  At the end of the day, though, no main series character’s presence is more felt than Ramsay Snow.  He crops up in person a couple of times, but you can feel his influence in most of the scenes that take place around the Forrester stronghold of Ironrath. 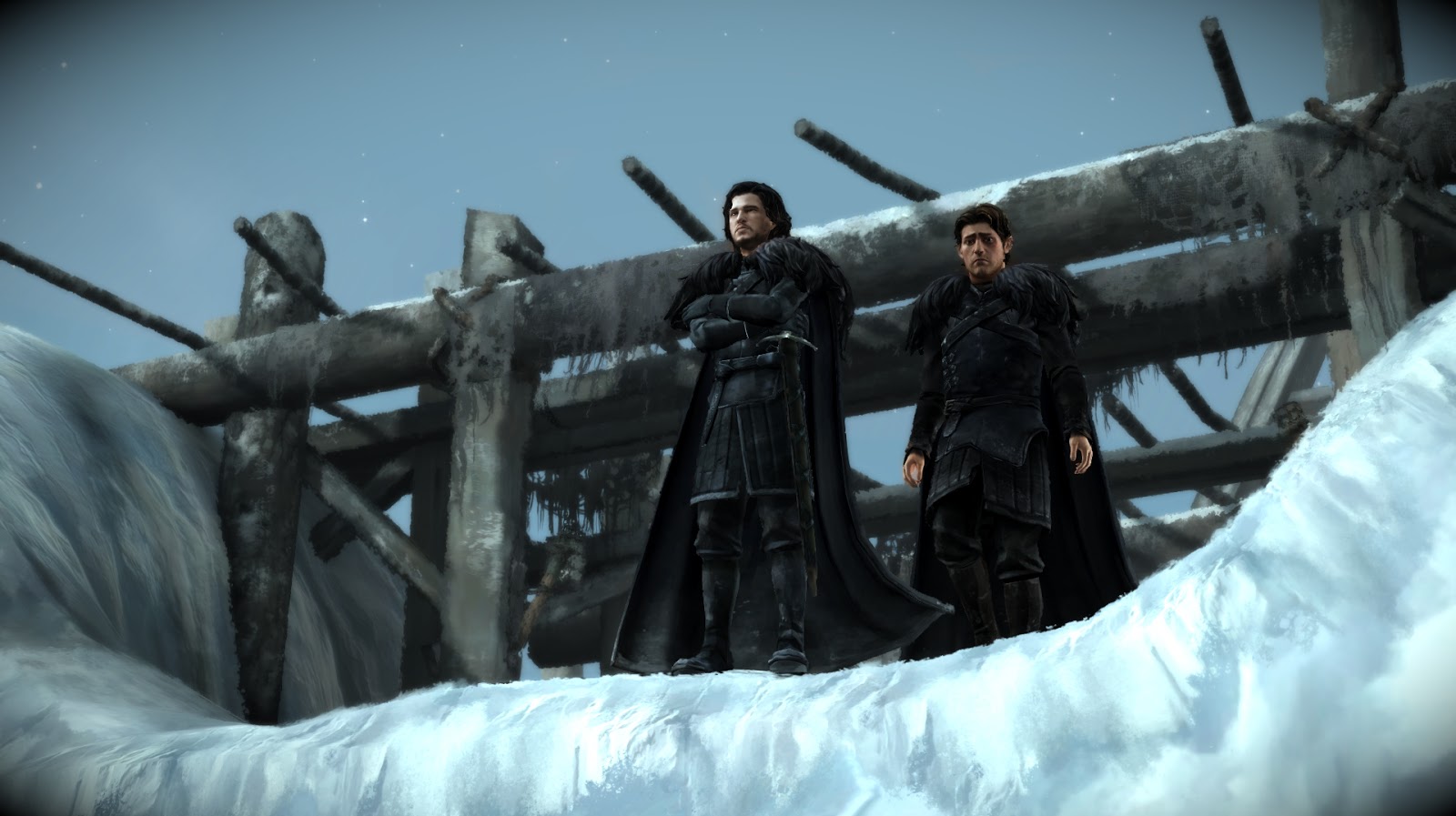 So we have likable heroes, despicable villains, and some cool fan service.  Sounds like they scored on the character front, right?  In general, I would say yes.  Unfortunately, the story gives too much influence to some of the ASOIAF core characters and ends up robbing the game of some immersion.

As a fan that has read the books and watched the show, I’m inclined to make decisions counter what should make sense to the characters in the moment.  It feels obvious that allying yourself strongly with Tyrion Lannister against his sister makes sense.  But I know that jumping in with him just prior to Joffrey’s wedding might not be the best idea.  Moments like these take me out of the game; I’m actively making decisions based on what I personally know will happen rather than what the storyline should be guiding me towards.  In the north, many of my decisions started to paint the picture that my hero was proud, but impetuous, and prone to making bold, aggressive moves to defend his family.  But when presented with the choice to pull a knife on Ramsay, I’m again pulled out of the game a bit.  There is no way they are actually going to let me kill Ramsay or even hurt him.  So I acted counter to the way I’d been playing the character up to that point.

Characters created solely for the game have no such plot armor, though, and it is easy to get attached to them.  Don’t get too attached, though.  This is a Telltale Games adventure, and more importantly, it is Game of Thrones.  There will be characters you love that die horribly.  There will be characters you hate that just don’t seem to get what is coming to them.  Plenty do, however.

The most impressive thing about the characters is how large a cast it actually is.  With each of the Forrester siblings having their own storylines in different parts of Westeros (and Essos), there are a lot of people to keep track of, each with their own personalities and quirks.  The writers have done a great job balancing such a large cast and keeping most of them interesting. 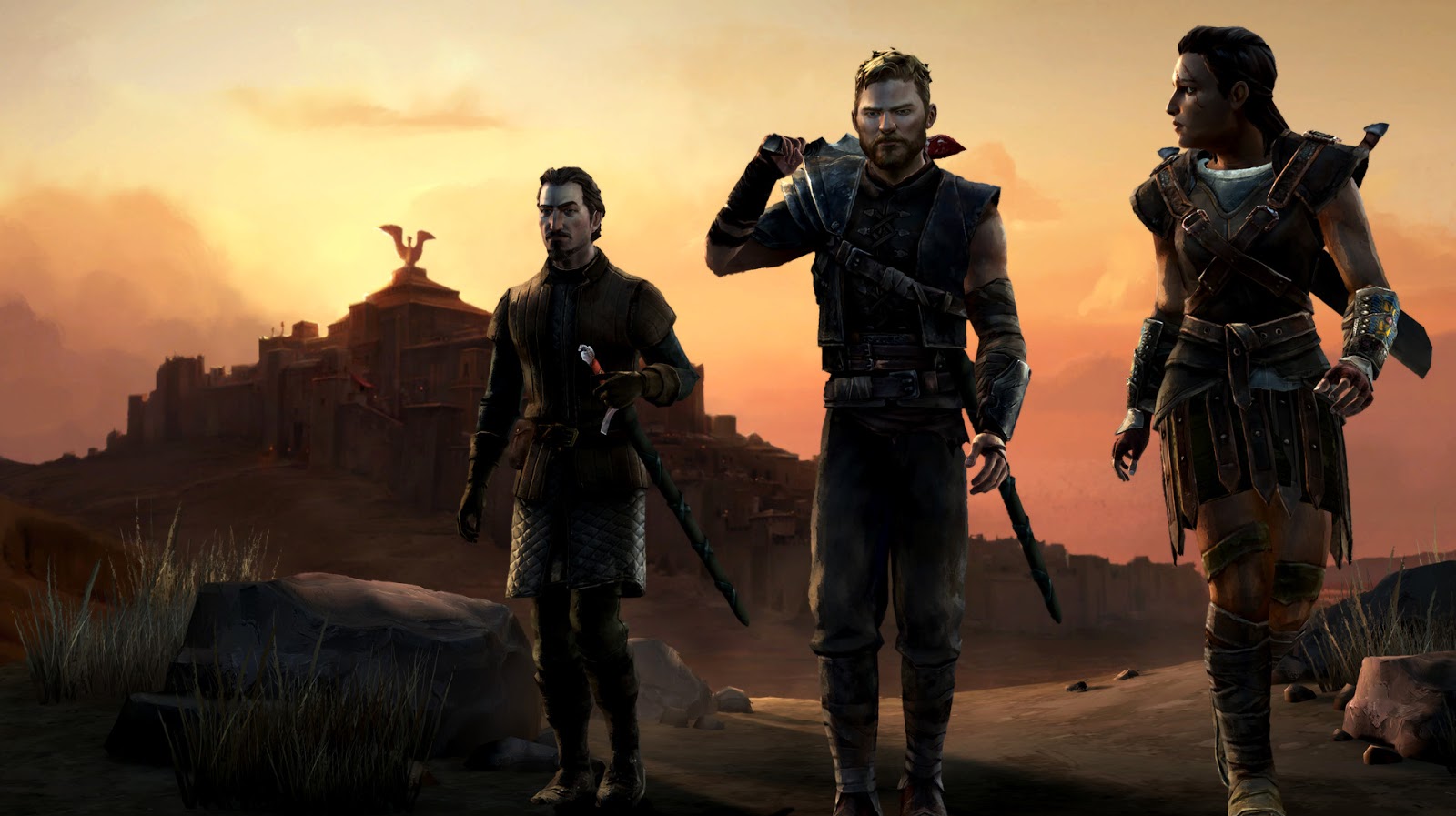 The obstacle or challenge that really drives the story is really rather simple.  The Forrester clan is threatened by a neighboring rival, and each of the family members is working to help in their own way, whether it is by trying to gather a foreign army, obtain backing from the nobility in King’s Landing, or just keep everything together on the home front.  The one exception is Gared, a squire who is sent north of the wall on is own adventure.

Each storyline is given plenty of time to contribute to the larger narrative, but by the end, at least one of the threads seems to just burn out without having had much impact at all.  That could be due to the choices I made along the way, but it feels like there wasn’t much I could’ve done differently.

And that is where the overall storyline stumbles for me a bit as well.  Telltale’s games frequently give the illusion of choice more than actually allowing you to guide the story.  There are a handful of significant choices that you make along the way, but many, many of them feel like it doesn’t matter how you react, the end result will ultimately be the same.

With such a huge cast, and so many disparate threads to keep track of, there is only so much flexibility that Telltale could effectively include.  That can be forgiven as long as the overarching narrative is good and you can feel engrossed even without having a lot of control.  I think they just barely missed that distinction here and it is because the story itself can be downright depressing.  For every minor “win” that the Forresters get, it feels like they lose sooooo much more.  Eventually, you feel like it is hopeless, the Forresters seem to be doomed.  And that makes the feeling that your choices don’t matter stand out even stronger…no matter what you do, you get the sense it is going to end very badly. 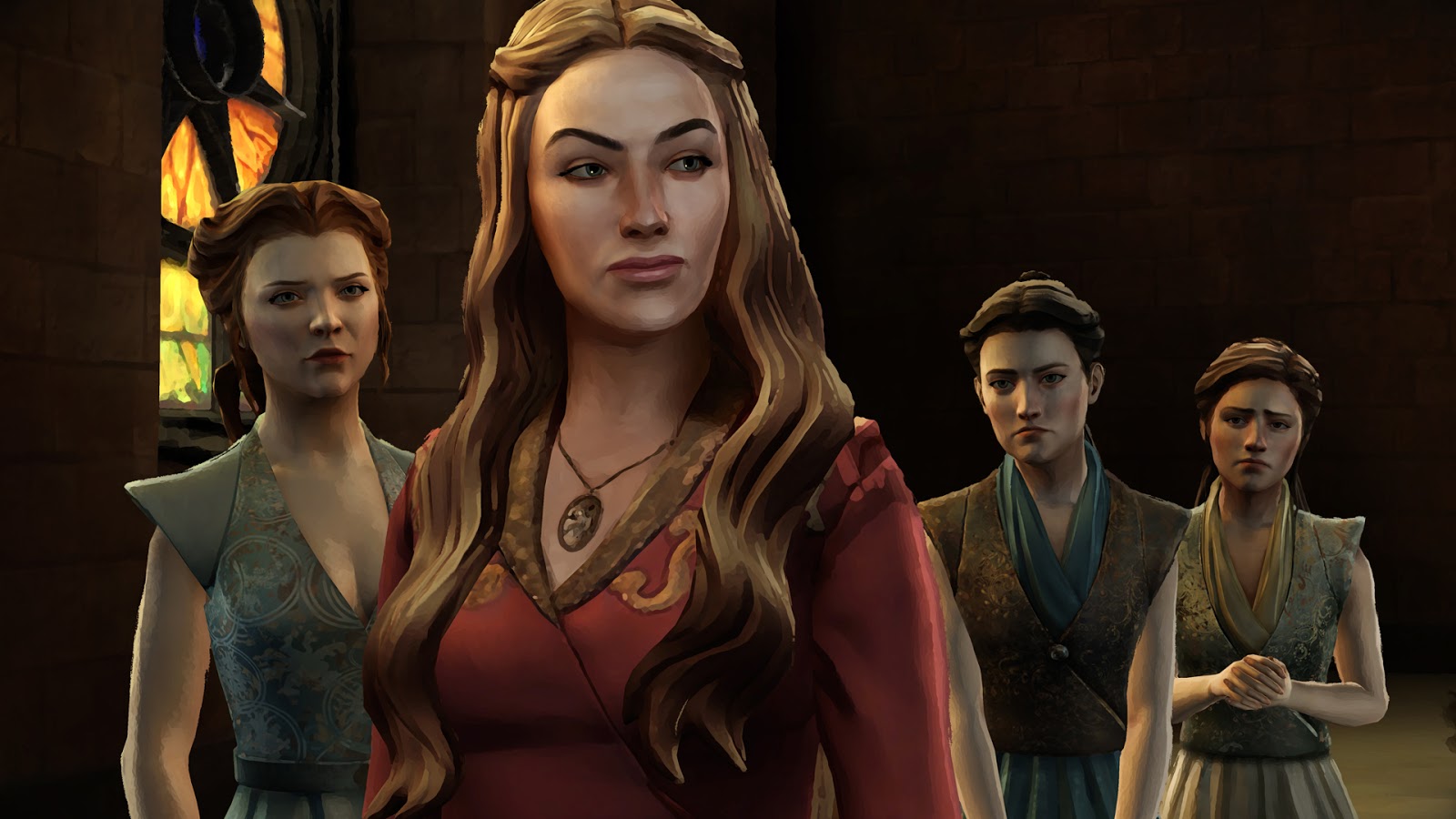 I’m also not sure how the story will play for non-ASOIAF fans.  The disparate locations and factions may seem to confusing to someone that doesn’t know the difference between a Targaryen and a Bolton or Tyrell.  It wouldn’t be such a big deal if the game didn’t tie so closely to some of the events and characters from the broader universe.

As monumentally important as the story is, though, the presentation also needs to draw you in.  This to me is where the game suffers the most as the overall quality swings wildly.

The art style is interesting and like the TV show, is slightly different depending on the setting.  North of the wall, things are very bleak and the art style is crisp.  In King’s Landing, everything takes on a warmer style that puts you in the mind of a moving painting.  I think I could really get to like the stylistic choices if they weren’t so disserviced by poor textures, some strange graphical effects, and sluggish system performance.  Clearly, the game engine itself is struggling to keep up with everything they are trying to do with it, particularly on last-gen systems.

I played Game of Thrones on the Xbox 360 and it was brutal.  At least two of the episodes had major issues with the game slowing to a crawl during critical moments.  In fact, the climax of the sixth (and final) episode of this season is supposed to be dramatic and get your blood pumping.  Unfortunately, the game started lagging so badly, it would literally freeze for 5-10 seconds (with ambient background audio still playing), then it would “un-stick” and let me play for about 30 seconds before freezing again.  Talk about taking all the tension out of the climax.  Instead of worrying about what was going to happen to the characters, I was worried that the lag would cause me to screw up (or miss entirely) the quick time events (QTEs).  Very disappointing.

In term of the QTEs themselves, they are a necessary evil.  They exist to give you a way to “play the game” rather than just have conversations.  In general, the responsiveness was much improved over previous games and seemed to get better with more recent episodes.  There were still a handful of times, though, that it felt like the game didn’t register my input, because I’d fail a QTE that I would swear I nailed. 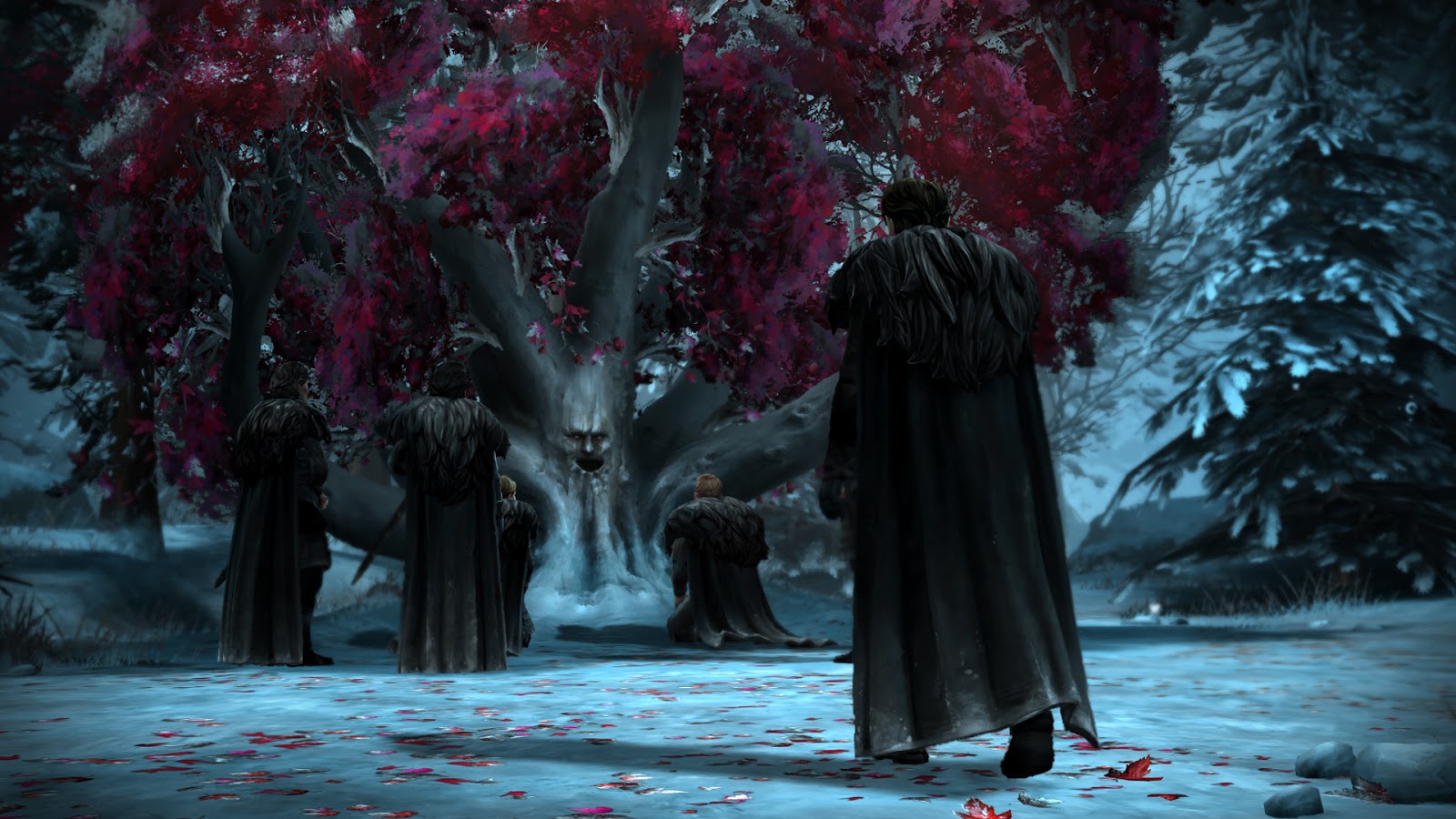 The character models and designs are awesome for all but the core ASOIAF characters.  In order to wrench the art design and models around to portray the actual actors’ likenesses, some of the characters look out of place, particularly Cersei and Margaery.  Some of the others are better (Tyrion and Ramsay aren’t bad).  Given the freedom to design their own characters, though, the designers did a great job with the rest of the cast.

The voices are also very well done, and here the TV cast is generally able to hold their own with the more seasoned voiceover actors.  In particular, the closing screens that walk through the important decisions you made are really well done with narration done by the TV cast. They were a pleasant surprise, since they were so far above and beyond the normal single-screen report-out that accompanied most episodes (and other Telltale games like The Walking Dead).

Overall, Game of Thrones is a good game, not a great one.  I enjoyed the characters and I still enjoy the Telltale style of interactive storytelling.  The mature story and the baggage from the rest of the ASOIAF universe will likely turn off a lot of gamers that aren’t already fans of the franchise.  Fans of the franchise will find a lot to love, but their experience outside of the game may have a little too much influence on the decisions they have to make along the way.

The story itself is well-written, but can really feel soul-crushing at times, and too many decisions feel inconsequential in the grand scheme of things.  The ending also clearly gives the expectation of a second season; very little of the overall story feels resolved.  Hopefully for season 2, Telltale can dump their aging engine and branch away from the main book/TV storyline and characters to let them take a few more risks. Their own Walking Dead series showed that you can make a compelling story in a familiar universe without relying on characters and plots from outside the game.