comments Share
You are reading
Mark of the Kri – Retro Reflections

TagsMark of the Kri, Retro Reflections 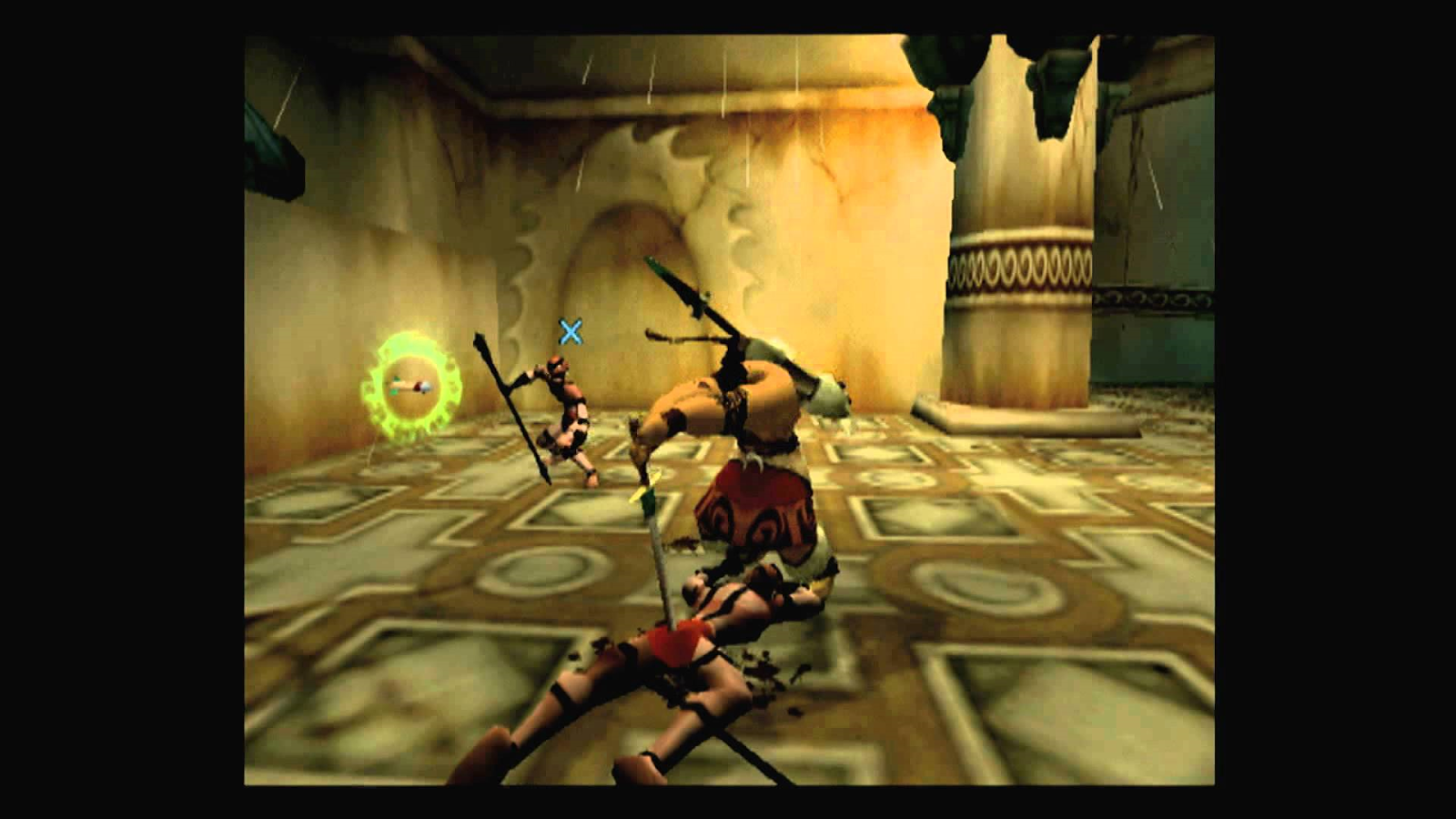 Mark of Kri is about a barbarian warrior in a land that could be Polynesia, who must stop an evil wizard from collecting all the pieces of a powerful, destructive spell. At first, Rau has to stop some bandits to prove himself, but later he undertakes more crucial missions.

The gameplay involves combat, stealth and a little exploration. Combat relies on the use of different weapons and the focus mechanic, which means two things: 1) to attack an enemy you must focus on him first. 2) the fewer enemies you focus on the more combos you can perform. Weapons include a sword, a bow, a spear and an axe. The sword is fast and I killed dozens of opponents with it. The bow is like having a sniper rifle; if you aim carefully one arrow is enough to kill someone from a distance. The spear was disappointing in terms of range and damage and I cannot comment on the axe because I didn’t play long enough to get it.

Stealth requires many elements combined correctly in a game: level design, enemy behavior (seeing and hearing range, movement patterns) and position and your own abilities. Thankfully, everything is designed properly in Mark of Kri and stealth is fun most of the time, as you can sneak behind someone silently, grab him from behind a corner or jump onto him from a roof. 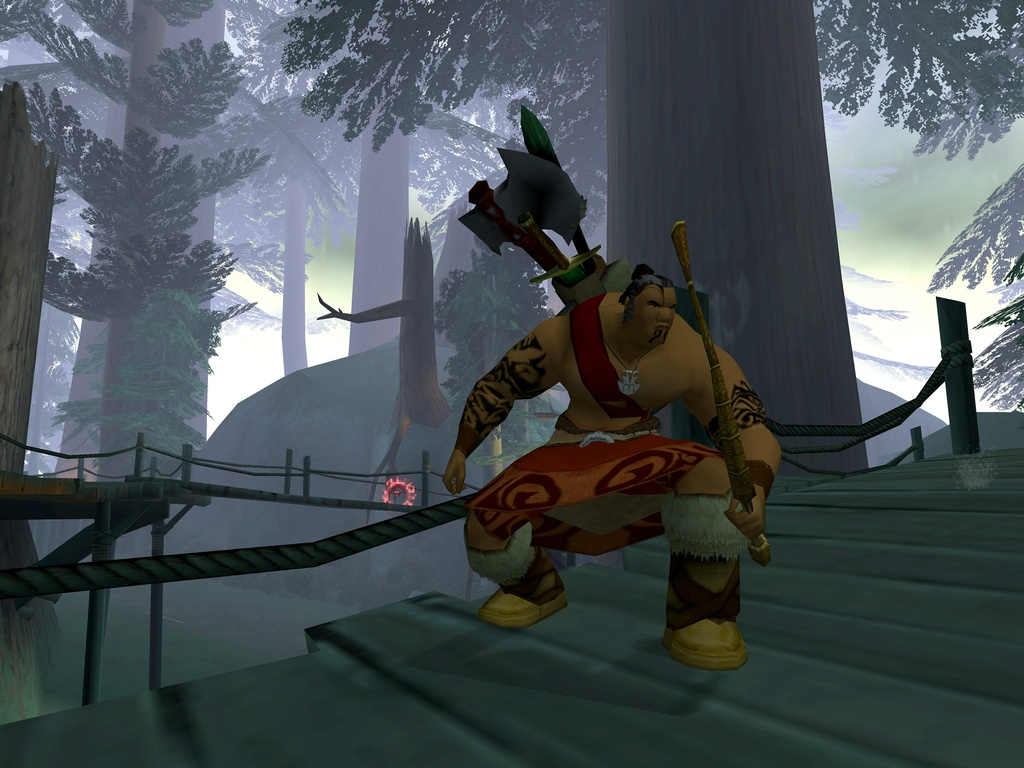 Though the level design is mostly linear you should grasp your surroundings before moving forward in order to choose the best course of action. If you search everywhere you find helpful items: diamonds, which increase your maximum health, red gems, which replenish your health, arrows for your bow and save scrolls. You can save anywhere you want but you consume a save scroll when you do so.

The game’s main innovation is the Raven. During your adventure you are followed by a black bird, your “spirit guide”, which flies ahead and perches on predetermined spots. Then, you can see through its eyes, thus knowing which enemies await you and their positions, so that you can move stealthily. The raven may also activate levers, lower ladders or read scriptures on walls. The raven mechanic makes stealth tactics effective and turns Mark of Kri into a more memorable experience.

Normal enemies are defeated relatively easily, especially if you perform a good combo. However, if they are many you may receive a lot of damage, especially if you forget to block. Armored soldiers are impervious to bow attacks and require many hits to bite the dust. Guys with horns call for reinforcements the moment they spot you so stealth is advised. Archers are annoying, especially when they are in high places, which gives them increased range. 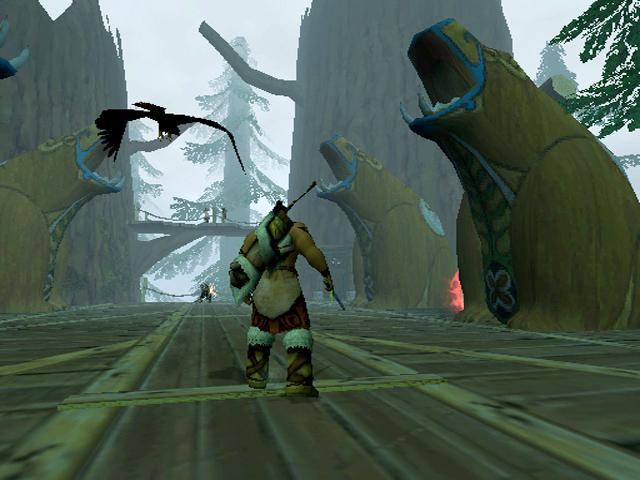 Mark of Kri has a distinct graphics style. I like the scenery, for example ruined temples, waterfalls and dense forests, the green, grey and brown colors and the sketches used to tell the story. You think you are in a different world, with its own atmosphere. The animation is very good, especially when you grab someone and smash his head on a wall or slash a soldier’s head off.

The game’s brutality, narration (made by an old man who knew Rau), story (an inexperienced hero who enjoys battle and gradually discovers his power and the world’s trickery) and main character (a huge guy with few clothes and no armor) remind of Conan.

The voice acting is realistic and occasionally slightly humorous (I am referring to Rau’s trainer). The music helps create a sense you are in a distant place which is both dangerous and attractive. 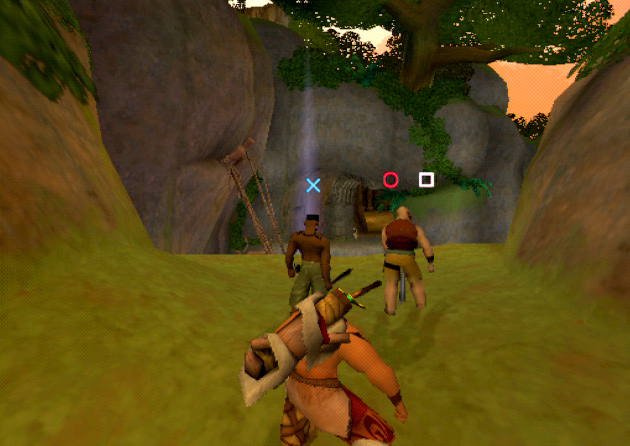 The control seems complicated at first but a smart tutorial which is integrated in the first quests makes it easy to learn everything you need. With the left analog stick you move and with the right you focus on enemies, meaning that you select targets. “X”, “square” and “circle” are for striking and “triangle” is for seeing through the bird’s eyes. L2 is for sending the raven to a perching spot, R2 is for changing weapons and R1 is for blocking or disarming an opponent. Lastly, symbols appear over enemies you have focused on to show which buttons you must use to initiate a combo or stealth kill. So, buttons don’t have always the same use but this is not a problem.

Mark of Kri is original, well-presented and fun to play. However, I didn’t finish it. The reason is that you rely more and more on stealth to survive and I don’t have a lot of patience in my age. Nevertheless, it is more than a decent hack and slash game; its designers attempted something new and succeeded. 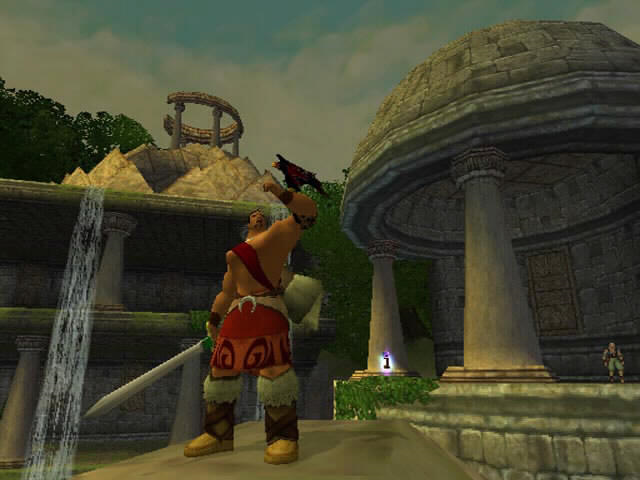